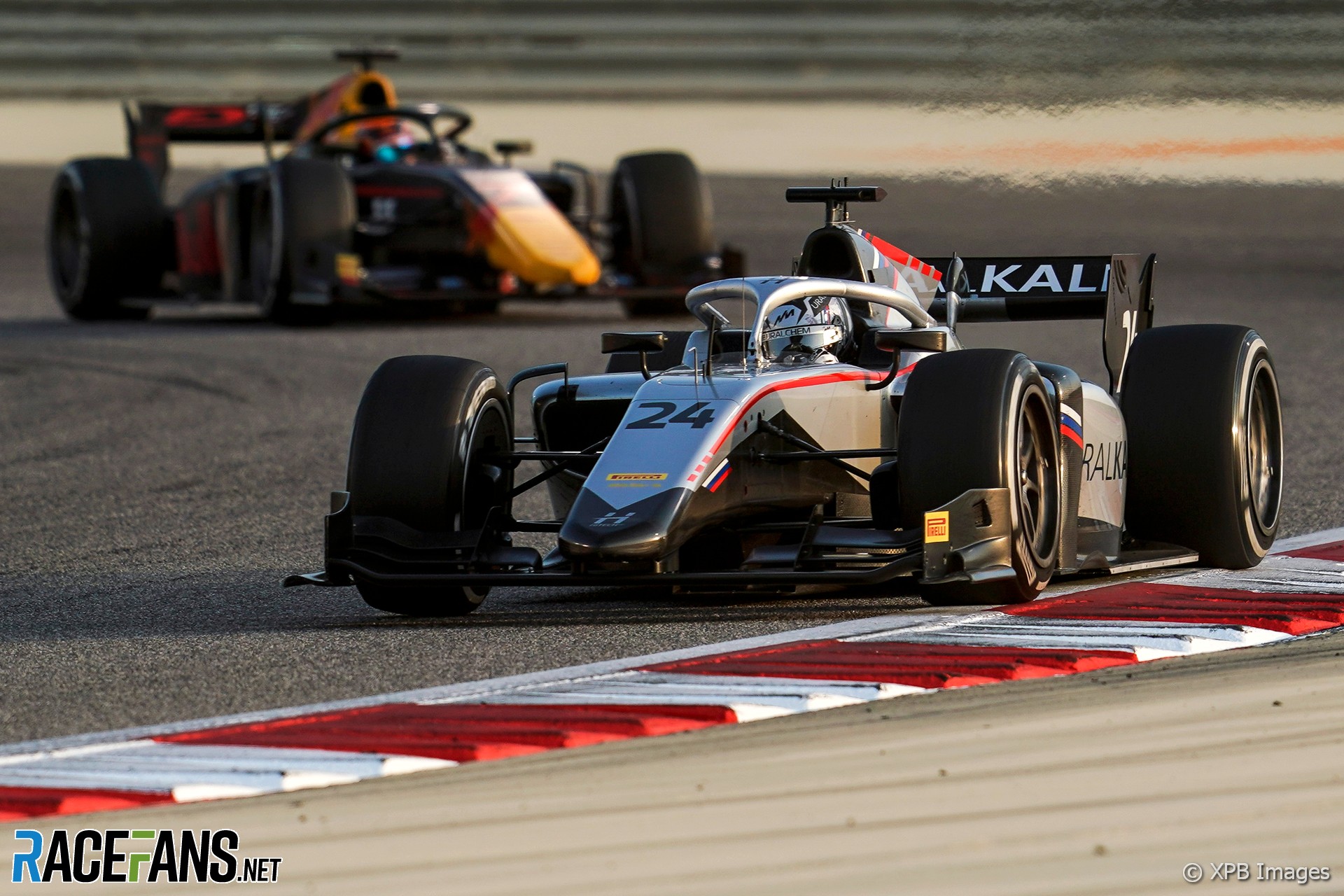 Nikita Mazepin has narrowly avoided an automatic ban after being penalised for two of the four incidents he was investigated for in today’s Formula 2 race.

The stewards gave Mazepin a five-second time penalty and two penalty points on his licence for impeding Felipe Drugovich while his rival tried to pass him on the pit straight.

He was given a further two penalty points and another five second time penalty for forcing Yuki Tsunoda into the pit lane exit while being overtaken by the Carlin driver.

His two five-second time penalties drop him from third to ninth in the final classification. Drugovich is therefore promoted to the final podium place.

The stewards took no action over two other incidents Mazepin was involved in, both of which involved Drugovich. They cleared him of forcing Drugovich off the track on the approach to turn four, which led to his rival hitting a corner distance marker, and also cleared him for making contact with Drugovich’s car.

Mazepin’s four penalty points puts him on a total of 11, which leaves him one away from 12 which would trigger an automatic one-event ban. As Formula 2 is running its final event of the season this weekend and Mazepin is due to graduate to Formula 1 with Haas next year, he would be unlikely to serve any ban while in F2.

The first incident Mazepin was involved in, and penalised for, occured when Tsunoda passed him for the lead. The stewards ruled Mazepin forced Tsunoda off the track, and issued no penalty to the Carlin driver for completing his pass with all four wheels out of boundaries.

“The stewards determined that car seven [Tsunoda] started a pass to the right of car 24 [Mazepin] on the pit straight and established a significant part of his car alongside car 24 while car 24 was moving to the right in a blocking manoeuvre.

“Car 24 continued moving to the right until his right side tyres crossed the edge of the track, thereby forcing car seven completely off the track in breach of Article 2 (b) of Appendix L Chapter IV of the FIA International Sporting Code.

“The stewards note that had car seven not been forced off track by car 24, car seven could clearly have successfully completed the pass on track and, therefore, no action is taken against car seven for completing a pass whilst being beyond the track limits.”

Mazepin then became embroiled in a battle with Drugovich. The stewards ruled that although Mazepin gained a position from Drugovich after making contact with the MP car at turn one, he should not be penalised because he subsequently relinquished the place.

However the stewards took a dim view of a subsequent move by Mazepin when Drugovich tried to pass him again.

“Car 15 [Drugovich] started a pass to the right of car 24 on the pit straight. Car 24 moved to the right in a blocking manoeuvre at the same time and in the process moved to the track edge. Car 15, who had established some amount of overlap in the pass attempt, was forced to slow to avoid a collision and was, therefore, hindered.”

Drugovich hit a corner marker on the approach to turn four as he tried another move on Mazepin and was strongly rebuffed. The stewards ruled this incident did not deserve a penalty.

“The stewards determined that car 15 attempted to pass car 24 on the right on the straight between turn three and four. Car 15 did not establish overlap during the manoeuvre. Car 24 moved to the right track edge in a blocking manoeuvre that the stewards found very aggressive but not in breach of the regulations.”

As a consequence of Mazepin’s two five-second penalties championship contenders Callum Ilott and Mick Schumacher are promoted to fifth and sixth in the final standings. They remain separated by 14 points ahead of tomorrow’s final race.

Dan Ticktum, who originally finished ninth, moves up to eighth and therefore will start Sunday’s sprint race from pole position. Jehan Daruvala, Schumacher and Ilott will line up behind him.