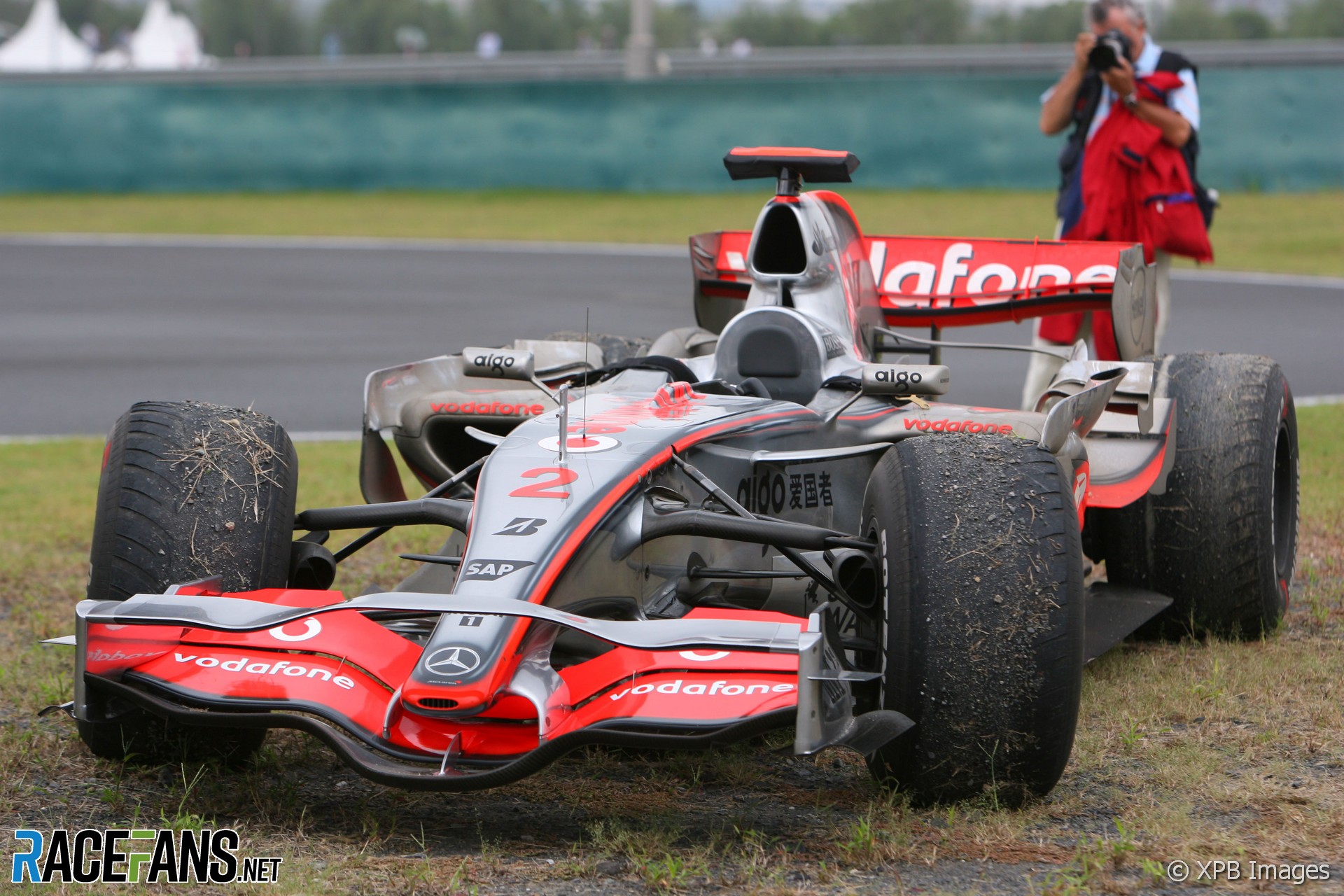 It’s surely now a matter of when, not if, Lewis Hamilton equals Michael Schumacher’s record for most Formula 1 race victories.

Had it not been for a costly error at Monza two weeks ago, Hamilton would already have drawn level with Schumacher’s 91 wins. He and his team failed to spot the pit lane entrance was closed when he came in during a Safety Car period, earning him a penalty, which cost him what looked like being a straightforward win.

Instead he has his first chance to equal that tally this weekend. But in a career which already spans 259 grands prix and 90 wins, Monza wasn’t the first time Hamilton narrowly missed out on a win. Here are 10 other occasions when victory slipped from his grasp, for various unusual reasons.

Hamilton’s hopes of clinching the world championship in his first season – potentially an extraordinary achievement – were halted by a pitifully small gravel trap at the pit lane entrance at Shanghai. Having led the race commandingly from pole position on a damp track, Hamilton had been poised to clinch the title by winning the penultimate round of the season.

But as the track dried, both driver and team left the switch to dry-weather rubber unfathomably late. By the time he entered the pits on lap 31 his rear tyres were falling apart, the canvas beneath the tread visible. When Hamilton tried to swing left into the pits, the McLaren wouldn’t make the turn, and bogged down in the gravel, his race over.

It was a massive blow to Hamilton’s title hopes. Two weeks later in Brazil a gearbox problem ensured the trophy went to Kimi Raikkonen.

At the end of his unsuccessful first title defence, Hamilton took pole position for the inaugural Abu Dhabi Grand Prix at Yas Marina. He did so by an emphatic margin of six-tenths of a second, aided by a slightly lower fuel load, in the last race of the refuelling era.

But soon after the start his right-rear brake began grabbing, and having led all the way he was forced to retire after his first pit stop.

This was a pivotal moment in Hamilton’s career. He was already getting restless at McLaren, straightjacketed by the corporate environment and, more frustratingly, their inability to consistently compete for another title.

Victory in the Italian Grand Prix left him 27 points behind championship leader Fernando Alonso, whose Ferrari looked beatable. Hamilton led away from pole at the next round in Singapore, but a gearbox problem forced him out after his second pit stop.

McLaren boss Ron Dennis later insisted the retirement was triggered by a failure of a Mercedes part. Whatever the cause, the ultimate effect was Hamilton signed for the Silver Arrows soon afterwards.

Hamilton’s title hopes were as good as over by the time the championship arrived at Yas Marina for the 18th race of 20. As had been the case three years earlier, he stuck his McLaren on pole position and led until it broke down.

Hamilton’s hopes of leaving the team which brought him into F1 on a high were ended not by another technical failure, but a rival. Nico Hulkenberg led the race convincingly for Force India earlier on, but Hamilton took over the lead on lap 48 and appeared to have the race under control until Hulkenberg took him out.

Many people doubted Hamilton’s decision to move to Mercedes. From early in 2014 it became clear they would have to eat their words, as the team produced a phenomenal machine for the new V6 hybrid turbo era.

They were not immune from first-race glitches, however. Hamilton’s car faltered early on, handing the first victory of the new era to team mate Nico Rosberg.

Mercedes had to cajole Hamilton to take his third place on the Monaco Grand Prix podium in 2015 after a catastrophic strategy blunder handed victory to Rosberg. He’d held a comfortable lead until a Safety Car period, when Mercedes brought him into the pits, assuming he’d retain his advantage and get the benefit of fresh tyres. Instead he emerged behind Rosberg and Sebastian Vettel.

“I’ve lost this race, haven’t I?” asked Hamilton, and the team had to admit he was right. On the victory lap he pulled to a stop at Portier, where race engineer Peter Bonnington urged him to join the post-race festivities, admitting: “I know you don’t want to.”

Hamilton did as he was told, and knocked over the ‘number three’ board as he parked up. At least unlike Nikita Mazepin at Spa earlier this month he avoided a reprimand for doing so.

Rosberg’s fortuitous Monaco win didn’t stop Hamilton taking a third world championship in 2015. But in the latter stages of 2016 a retirement from the lead in Malaysia proved a fatal blow to Hamilton’s title hopes.

After Vettel turfed Rosberg off early in the race, Hamilton was on course to overturn his team mate’s eight-point championship lead. Then a big-end bearing failed in his power unit, forcing him to a smoky stop at the roadside.

“I just can’t believe that there’s eight Mercedes [powered] cars and only my engines have been going this year,” bemoaned Hamilton after Rosberg pulled 23 points clear in the title fight. “Something just doesn’t feel right.”

Surely the most bizarre lost victory of Hamilton’s career. He’d already survived contact with Vettel, who swiped his Ferrari into the side of the Mercedes during a Safety Car period, when he was forced to pit because his headrest had worked loose. That delay cost him more time than Vettel’s 10-second stop-go penalty. As in Malaysia the previous season, Daniel Ricciardo took advantage to claimed victory.

Many of Hamilton’s finest performances have come in wet races. But when the rain fell at the Hockenheimring last year he slipped up, spinning away the lead and limping into the pits with a damaged car. That led to a penalty and, later in the race, another spin. He finished a lowly 11th on the road, but was promoted to ninth place and two points when the Alfa Romeo drivers were penalised.

This was the first race Mercedes had permitted Netflix’s Drive to Survive documentary makers to follow them at close quarters, and they captured the whole debacle, including a contrite Hamilton apologising repeatedly for his race-losing mistake. The team’s rivals will be hoping their second appearance in the series, being filmed at Sochi this weekend, produces more of the same.

Had Hamilton converted all 10 of these opportunities to win, he could have already become the first driver to 100 wins. Or more still if we add Monza this year, or other potential wins that could have been at Spa in 2008 or Silverstone in 2013.

However the same can surely also be said of Schumacher, who ended his career nine wins shy of a milestone century. Once Hamilton surpasses his tally, as now seems inevitable, how much further will he raise it?

Video: The history of F1’s ‘most wins’ record