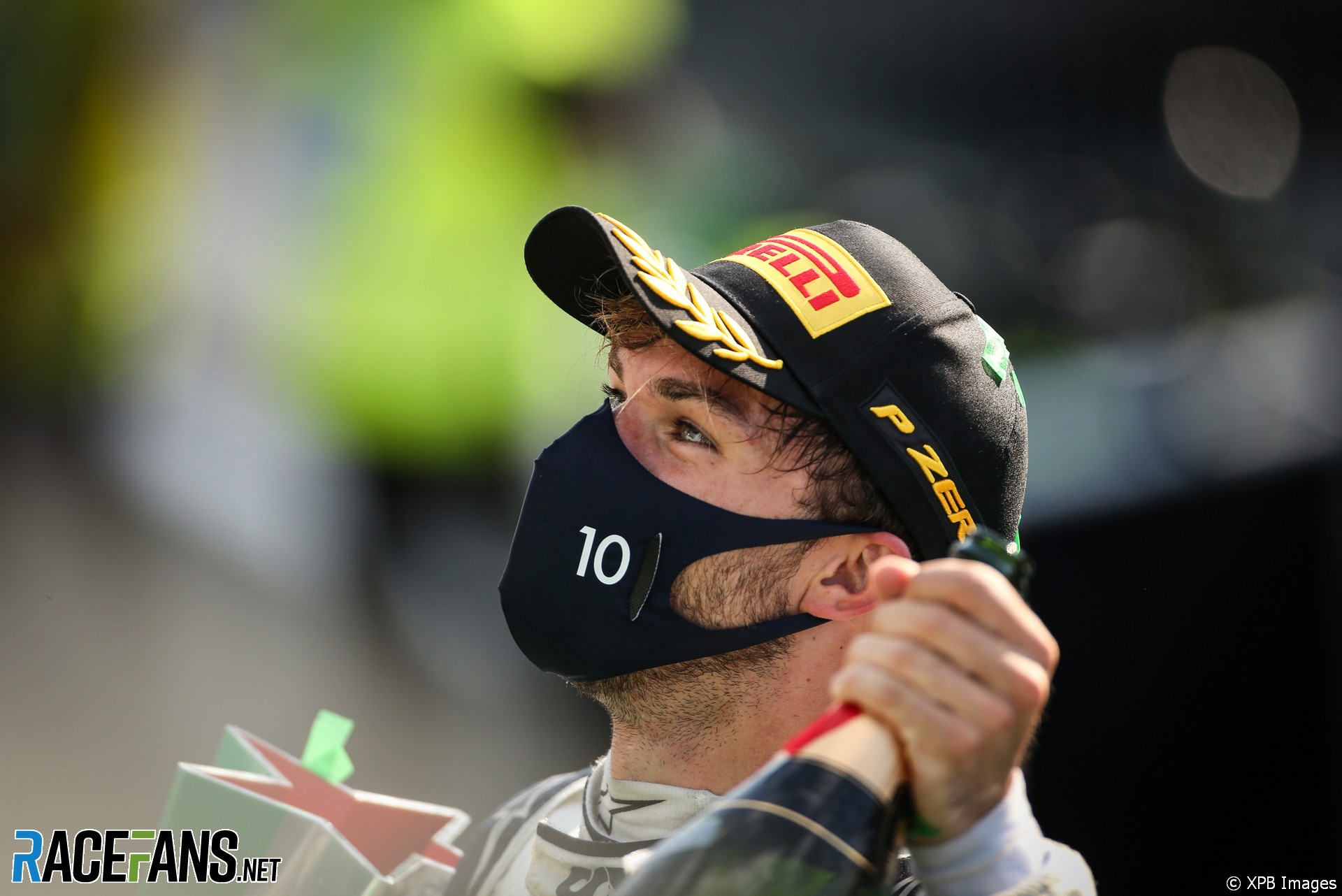 Pierre Gasly’s breakthrough victory for AlphaTauri on Sunday was the surprise of the season so far.

It came a year on from a painful mid-season departure from Red Bull. For some drivers, it could have been a career-ending blow.

But Gasly’s team principal Franz Tost has seen first-hand how the driver has rebounded from that painful setback, raised his game, and put himself in a position to take advantage when a rare opportunity to beat the big teams appeared.

“He came back to us last year before Spa,” Tost recalled in an exclusive interview for RaceFans. “He came here to the office I said to him – I was joking – ‘it looks like you were here yesterday’, because we were very familiar with him. He knew the engineers, knew his mechanics.”

Tost’s first step was to get Gasly comfortable again at Toro Rosso – now AlphaTauri – the team he left before his unsuccessful stint at Red Bull.

“I just told him to completely reset, enjoy sitting in the car, enjoy driving. If you don’t like anything on the car, tell us. We’ll try to get rid of this, we want to prepare your car where you feel well, where you feel confident.”

Gasly’s return came on the same traumatic weekend that his childhood friend Anthoine Hubert was killed in a crash during a Formula 2 race. Nonetheless, Gasly finished in the points with ninth place.

It proved the beginning of a rapid recovery. In Brazil he took advantage of a late Safety Car period to grab an unexpected podium finish, holding Lewis Hamilton back in a thrilling sprint to the line.

“To keep Hamilton behind for one-and-a-half laps was a really hard fight,” said Tost. “And he did it very professionally and really with a lot of driving instinct to be in the right position at the right time to block a world champion like Hamilton. This was already a very good sign from his side that he has measured and he has reached another level.”

Since his bruising experience at Red Bull, Gasly has also improved how he works with the team to get the best out of the car, said Tost.

“On the technical side he always had from the beginning onwards a quite high level. From the engineering side, the co-operation with the engineers, he trusts his engineer nowadays.

“Maybe this was not so the case in earlier days. He knows now that you need a good engineer on your side. And, if the engineer says ‘we go in this direction’ and you are not the 100% convinced, try it, then you’ll see what’s coming out.

“I think he learned a lot that these guys know what to do. And all the years together make you more measured and you learn a lot.”

Tyre management remains an extremely important skill for modern F1 drivers. It’s another area where, while under pressure from Carlos Sainz Jnr for the win at Monza, Gasly demonstrated the benefits of his recent progress, Tost believes.

“To get this together with the high speed you have in Monza, to be concentrated to the last corner, the Parabolica and bring the victory home was really very, very, challenging and a good manoeuvre from his side.”

The stunning win for the team immediately invoked comparisons with their single previous victory, scored by Sebastian Vettel when the team was called Toro Rosso, in 2008. Tost sees some similarities between the two.

“Of course under normal circumstances it’s difficult for us to win a race. Because we all know there are two Mercedes cars which are faster than us, there is Red Bull faster than us and I suppose you’d say currently McLaren and Racing Point doing a very good job. Renault is not far away, we are close to them. And therefore it’s difficult to beat all of these cars to win a race.

“The package was, in 2008 in Monza, quite [good]. We had a really good car, we had a fantastic engine in those days as well. And there are many parallels with a really high-skilled driver, a good car and a very competitive power unit with Honda. And Pierre Gasly did a fantastic job as a driver. And these are the ingredients that you are in the position to win the race.”

Gasly’s breakthrough win followed a series of strong performances. However the circumstances of Sunday’s race undoubtedly played in his favour: He pitted moments before a Safety Car deployment which closed the pit lane, handing him a strategic advantage.

But, as Tost points out, a similar scenario worked against them just one week earlier in Belgium.

“In Spa without the Safety Car he 100% would have finished in fifth position because we had a very good speed there. He was with the pace, on a very good strategy.

“But then unfortunately, the Safety Car came out, the pit lane was not closed like in Monza, and the others had a pit stop for nothing, they gained 20 seconds. Norris was far behind Pierre before the pit stop and after the pit stop, crossed over in front.”

With the gains Gasly has made, Tost believes he has the potential to produce more eye-catching results over the coming rounds.

“We have a good package together. I expect also some good races in the second half of the season.”

21 comments on “Exclusive: Tost on how Gasly bounced back to become a race-winner at AlphaTauri”