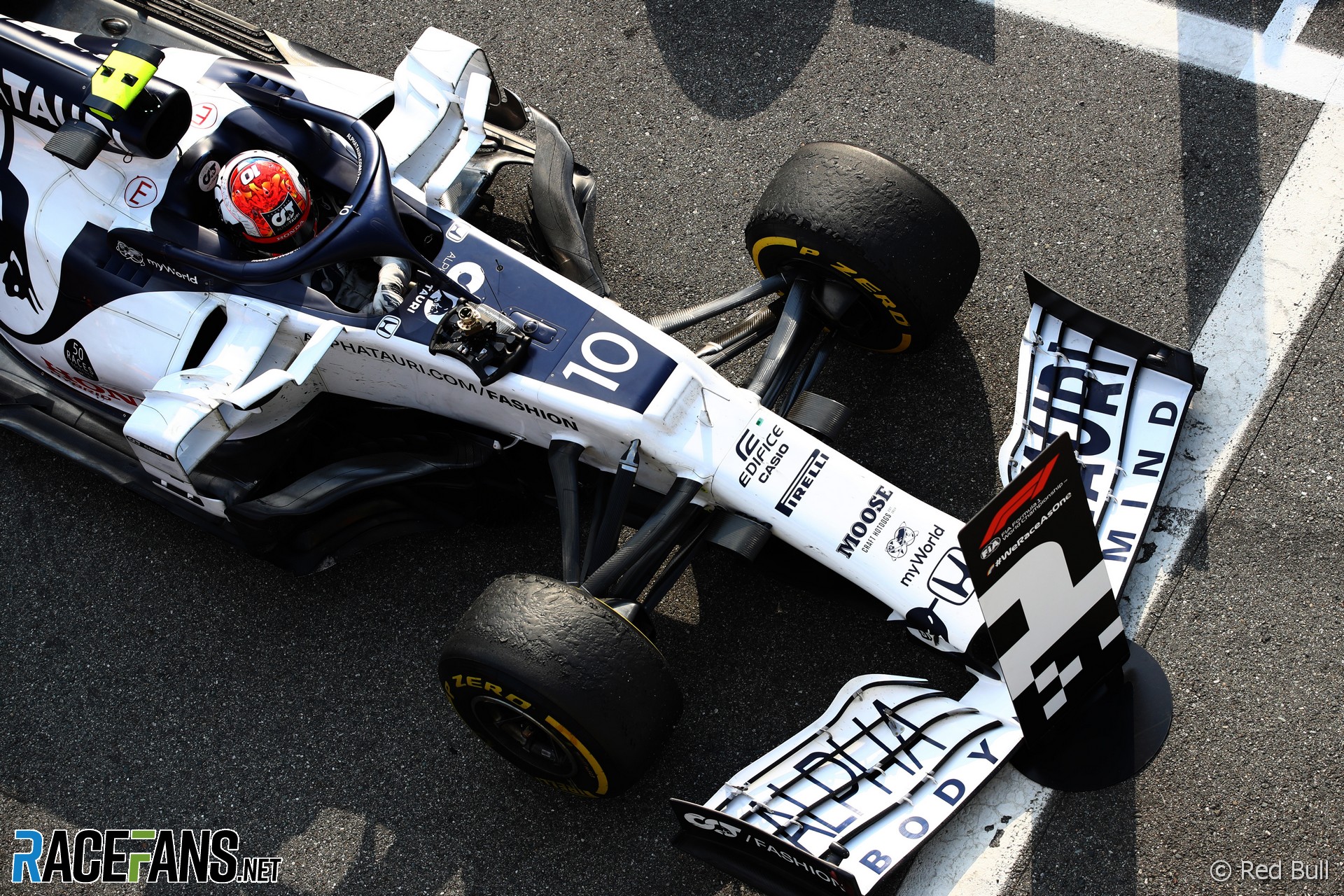 Pierre Gasly’s pit stop before the Safety Car period helped him win the Italian Grand Prix. But when the Safety Car came out he thought it had ruined his race.

The AlphaTauri driver held his 10th place at the start of the race ahead of team mate Daniil Kvyat. Gasly was the only one of the two who reached Q3 and therefore had to start on his used set of soft tyres. Kvyat, on a new set of hard tyres, stayed close to his team mate, and said on the radio at times Gasly was holding him up.

However the pair were in a train behind Lance Stroll and Daniel Ricciardo. Several laps before the Safety Car was deployed the team mentioned to Gasly other drivers were beginning to pit, and he would likely be in soon.

On lap 18 Kevin Magnussen’s Haas stopped at the exit of the Parabolica. Had the team suspected an imminent Safety Car they probably wouldn’t have brought Gasly in. Pit stops under green flag conditions cost much more time than those under Safety Car conditions, especially at Monza, due to the track’s high-speed layout.

Had the team chosen to pit Gasly at this point because they expected the Safety Car would come out but the pit lane would remain closed, it would have been an incredibly astute tactical ploy. But team principal Franz Tost admitted after the race this wasn’t the case. “The team did a fantastic job in deciding to bring him in one lap before the Safety Car was deployed,” he said. “Of course, we didn’t know this at that time, but at the end this was exactly the right call.”

Soon after Gasly rejoined the track the Safety Car was deployed. He was dismayed at the news, expecting it meant his rivals would be able to pit, lose less time and gain an advantage on him.

However his engineer quickly reassured him: “Pit lane entry is closed. We’ll keep you posted.”

The fact the pit lane entrance was closed meant his rivals ahead could not pit straight away. That didn’t stop Alfa Romeo bringing Antonio Giovinazzi in.

When he came out behind the AlphaTauri Gasly asked: “Why did Giovinazzi exit?” “He will have a penalty,” came the reply. “The took the risk. Just keep your head down at the moment, we are good.”

Gasly was able to rejoin the Safety Car queue before the pit lane exit reopened. “This is good for us,” said his engineer. Once the cars ahead pitted Gasly was up to third place.

Ahead of him were race leader Lewis Hamilton, who came in when the pit lane was closed and would be penalised, and Lance Stroll, who did not pit under the Safety Car.

The race restarted briefly, then the Safety Car came out again when Charles Leclerc crashed at Parabolica. Showing how on top of the strategy game AlphaTauri were, they advised Gasly before the red flag came out that Hamilton would get a 10-second stop-and-go penalty.

Gasly used the opportunity of the red flag to fit a fresh set of medium tyres, having taken the hard compound at his pit stop. He was therefore on the best compound to run to the end of the race.

Stroll was also able to make his mandatory tyre change at this point. But when the race restarted Gasly immediately made a better start and took second place off the Racing Point. Once Hamilton served his penalty, Gasly was into the lead, and on his way to an astonishing victory.

As he admitted later, he expected a much worse day when the Safety Car appeared. “Once we pitted and I just exited the pit lane I saw the Safety Car, I came on the radio and I was like: ‘Is that a joke? We just pitted like exactly at the worst time possible.’ They just told me ‘OK, the pit entry is closed’ so that’s what happened.

“In the end it turned out to be a very lucky move. There was no way we could have planned this. I think today we’ve had a little star with us, a little angel, let’s say, taking care of us.

“We got pretty lucky on that one and after obviously there was still 30 laps to do which were very difficult but that was clearly a turning point.”

29 comments on ““Tell me it’s a joke”: Why Gasly thought race-winning pit stop had ruined his Italian GP”