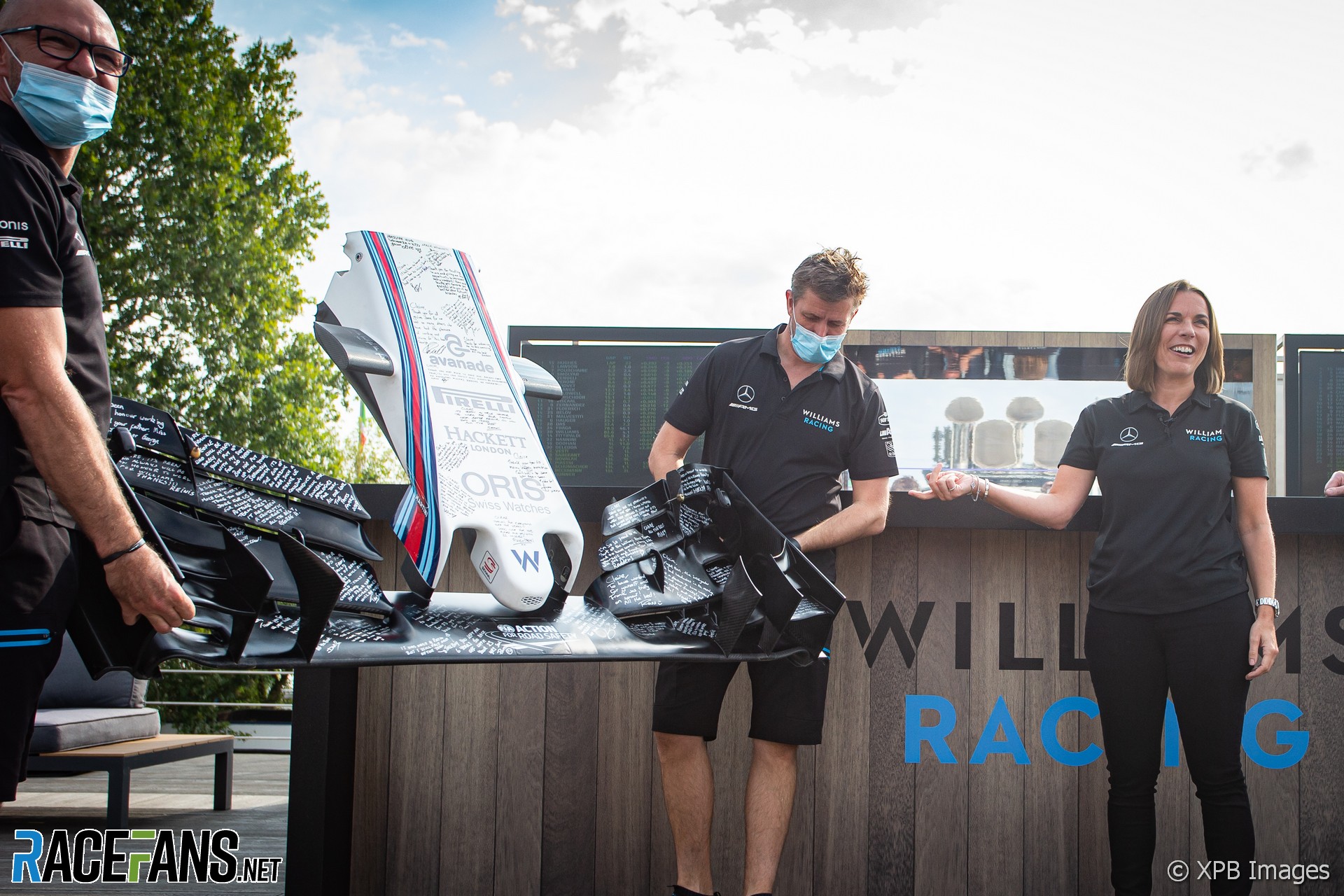 After the Belgian Grand Prix I’d spent the night at home, then departed early Monday by car for Italy via Molsheim, home to Bugatti, where a factory visit is planned. I spend Monday evening after arrival walking the Ettore Bugatti trail through the quaint Alsatian village.

Tuesday’s visit to Bugatti’s ‘Atelier’ – ‘factory’ is too plebian a term for the space-age facility – proves an incredible privilege. Two cars per week are hand-assembled by true craftsmen, working in methodically unhurried fashion as they produce works of automotive art. Highlights: observing as a W16 1,479bhp power unit gets mated with its monocoque and drooling over a bestickered Divo being prepared for testing.

I’d visited the Schlumpf Collection – home to an incredible 120-plus Bugattis – in Mulhouse many times but my route takes me past the city so spontaneously I pull in to absorb more of the jewel-like engineering that makes these (predominantly) blue cars so special. Thereafter the itinerary takes me through Switzerland to Lecco in the northern lakes area of Italy. 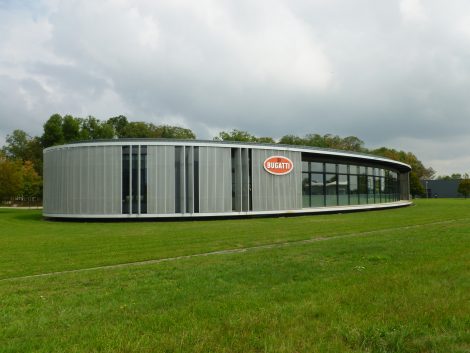 Arrive in Monza, head for Covid test – Formula 1 protocols permit 120 hours between swabs while travelling, so I’m within the window since Sunday’s test in Spa-Francorchamps. Where previous tests proved painless, for some reason the Monza editions burned terribly, leaving a sensation that lingered for an hour.

After the test it’s straight into an exclusive interview with McLaren performance director Andrea Stella, one of the humblest men in F1. The Italian worked with the likes of Michael Schumacher and Fernando Alonso, so it proves illuminating to hear his take on the team’s current drivers, Carlos Sainz Jnr and Lando Norris. Given the events to follow, it proves incredibly timely. Keep an eye out for the interview coming soon on RaceFans.

The rest of the day is fairly routine – Zoom interviews, but in the media centre rather than home office – but it’s great to be back at what I view as F1’s heartland. Talk tradition, and Monza outranks all other venues, and that makes the 2500km round trip worth every kilometre, Covid19 precautions notwithstanding. 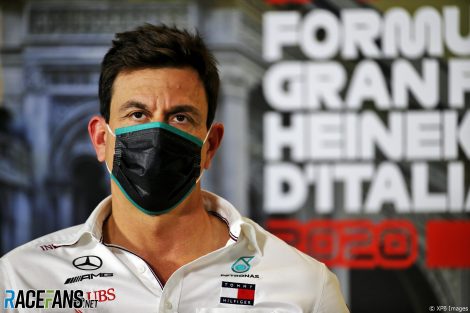 The highlight of Fridays is the 1pm FIA press conference, which takes on further significance under current circumstances given we can no longer ‘bump’ into team bosses in the paddock. After the Racing Point ‘photocopy’ verdict fell a month ago Mercedes F1 boss Toto Wolff told RaceFans the company was “happy to go to court” should his team, from which Racing Point copied design elements, be defamed.

Prior to the Belgian Grand Prix weekend former F1 team principal Colin Kolles suggested wind tunnel models and relevant data had made their way from the silver team to the pink outfit – surely damning statements. Had Mercedes commenced legal action against parties, I ask Wolff?

“Of course when there are defamatory comments being put online or that are being taken on air we have reacted appropriately,” he said, adding, “As long as it doesn’t damage the reputation of Mercedes then you have to take it with a pinch of salt.” Yet, Kolles is adamant that he has received no notice of legal action.

During the conference Claire Williams, attending her final race with the eponymous team after the sale to Dorilton Capital, is understandably emotional. The team reigned supreme when I first entered the paddock in 1997, and I’m extremely sad it has come to this.

Before the race the team present her with a signed nose and front wing assembly. I wish Sir Frank, Claire and her brother Jonathan all the best for the future.

After the conference I receive a call from a source who advises Renault will rebrand to ‘Alpine F1 Team’ for 2021. We run the story and two days later the scoop is proved on the money, so thanks mate – you know who you are.

I make use of the media-team meeting room in Monza for the first time to have off-record chats with some key team personnel. Not only is the return to (more) personal contact extremely important in what is a massive global sport but a very small tight-knit activity, but I’m given snippets that enable us to reveal the changes to the 2021 regulations to outlaw ‘photocopy engineering’.

One thing is clear about this important development in the regulations for the 2021 F1 season: Lots of clarifications will be required before all loopholes are plugged.

In the same breath I’m tipped off that Racing Point and Ferrari intend withdrawing their International Court of Appeal actions – the former against the verdict and severity of sanction; the latter against what it considers to be lenient treatment. On Sunday both withdrawals are confirmed, meaning the case is now effectively closed from a legal perspective although Racing Point continues to race their disputed cars.

I’d earlier sent Bernie Ecclestone a brief text as September 5th marked the 50th anniversary of the death of his close friend, the posthumous 1970 champion Jochen Rindt, at Monza. He calls, and after discussing the tragedy and his memories of the Austrian, he provides insights into the Williams sale. Watch out for our feature on the deal. 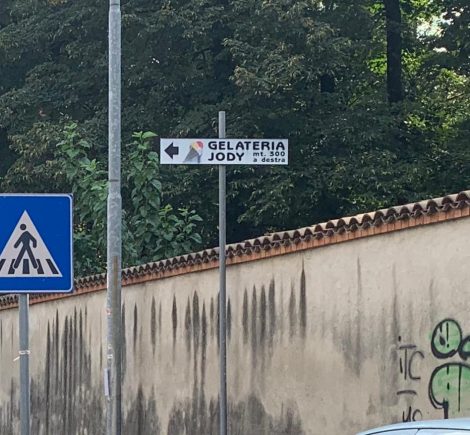 Have mandatory Covid test at the main gate test station – and am relieved there is no burning sensation. Assuming the test proves negative – an overnight process – this will see me through to Thursday in Mugello, where I will have the final test of this three-race set.

My route takes me down alleys behind the circuit, and I spy an ice cream named after “Jody” – the 1979 Ferrari world champion Jody Scheckter, I assume. It strikes me as the only reference to my compatriot all weekend – the media centre boasts a collection of artworks commemorating various Ferrari champions (and Gilles Villeneuve) but not Jody or John Surtees. Strange.

The significance of today’s race in championship terms cannot be understated: being the eighth event of the delayed season means that F1 has a legitimate championship. While provision was made to tweak the regulations if necessary, it is a tribute to the powers-that-be that F1 manages to stage a ‘legal’ championship despite the havoc wreaked by Covid-19. 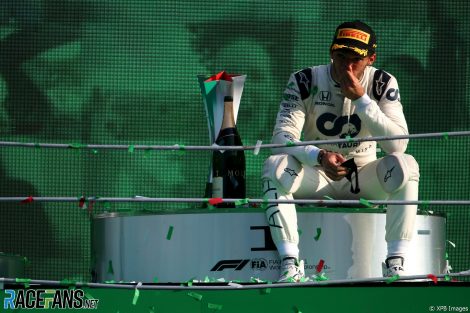 Little to add to the euphoria surrounding today’s result save offer my personal congratulations to Pierre Gasly and all at AlphaTauri. I’m thoroughly chuffed for technical director Jody Egginton, whom I rate highly, and, of course, Pierre, whose career has been a rollercoaster of emotions. To Sainz: Your day will come, mate. Ask your father: He too, suffered many initial disappointments before cracking it big time.

After the last round of Zoom conferences I leave the circuit at 730pm, heading south. I reflect on two ‘different’ Italian Grands Prix – 2008 and 2020 – both won by that plucky team from Faenza. Then I focus on the gap to Mugello: I have some exciting visits planned in the interim; more about them after Ferrari’s 1000th grand prix in Tuscany, which can only prove better than its 999th.