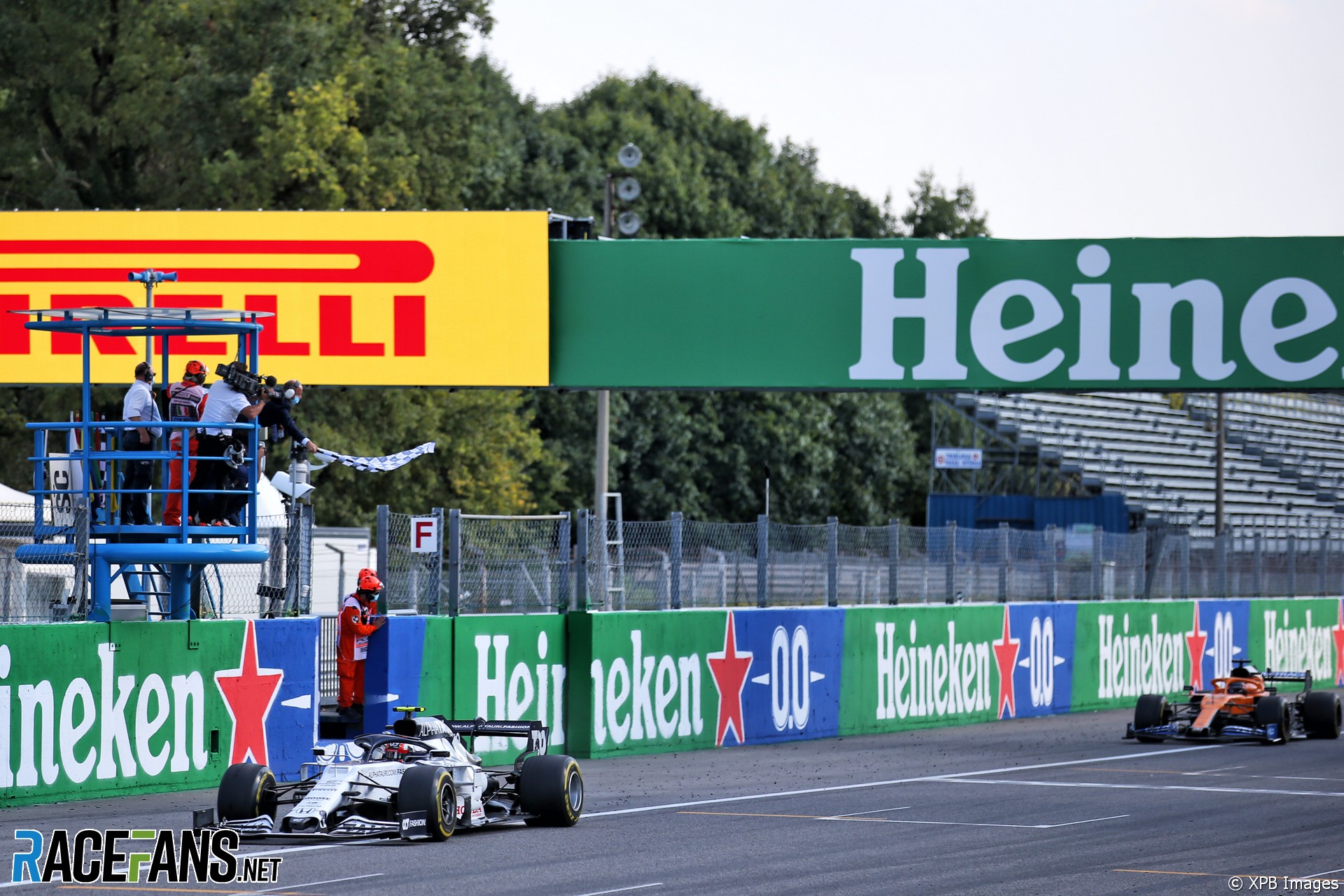 A remarkable Italian Grand Prix yielded many major new entries in the record books. These were led by F1’s latest new winners, Pierre Gasly and AlphaTauri.

Gasly is the 109th different driver to win a round of the world championship, and the first French driver to do so since Oliver Panis triumphed in the 1996 Monaco Grand Prix. France is Formula 1’s fourth most successful country in terms of race wins behind Britain, Germany and Brazil: Gasly took their 80th victory.

AlphaTauri are the 35th different team to win a race and the first new race-winning team since Red Bull in the 2009 Chinese Grand Prix. However AlphaTauri did win a race in its previous guise, as Toro Rosso. That 2008 victory, coincidentally also at Monza, was also the last time both a team its driver were first-time winners – Sebastian Vettel did the honours.

AlphaTauri ended a 2,730-day wait for anyone other than Mercedes, Ferrari or Red Bull to win a race. That run stretched back to Kimi Raikkonen’s victory for Lotus in the 2013 Australian Grand Prix.

This also means Honda have become the first engine manufacturer two win races with more than one team since the V6 hybrid turbo era began. It was the 77th win for the Japanese engine manufacturer, whose previous victories have come with Lotus (two), its own works team (three), Red Bull (four), Williams (23) and McLaren (44).

Not only did Mercedes, Ferrari and Red Bull fail to win, none of their cars finished in the top three places. You have to go back to the 2012 Hungarian Grand Prix, won by Lewis Hamilton’s McLaren ahead of Lotus pair Raikkonen and Romain Grosjean, for the last time that happened.

Gasly led a race for the first time in his career, as did Carlos Sainz Jnr. The pair were separated by 0.415 when they took the chequered flag. This was the closest finish to an F1 race for 10 years, when Fernando Alonso denied Vettel in Singapore by just 0.293s.

Lance Stroll joined them on the podium. For all three drivers, it was the second time they’d officially finished in the top three. However Sainz has only officially stood on the rostrum once – he was promoted to third place after the podium ceremony took place in Brazil last year.

Neither Hamilton nor Max Verstappen were able to extend their run of consecutive podium finishes. Hamilton, however, was a classified finisher for the 41st race in a row, equalling Nick Heidfeld’s record which was set at this race 11 years ago. Hamilton, however, scored points in all of these finishes, which is already a record of its own.

On Saturday Hamilton broke the record for the fastest lap ever in a Formula 1 car. He rounded Monza in 1’18.887, an average speed of 264.362kph. Team mate Valtteri Bottas set the second-fastest lap of all time.

Ferrari endured a terrible home race. Charles Leclerc and Vettel lined up 13th and 17th on the grid respectively. This was the team’s worst qualifying performance in the Italian Grand Prix since they began regularly fielding two cars.

The last time two Ferrari lined up as far down the grid at home was in 1962 when Lorenzo Bandini and Giancarlo Baghetti were 17th and 18th respectively. But the three other Ferraris on the grid that day fared better: Willy Mairesse was 10th, Ricardo Rodriguez 11th and Phil Hill 15th.

Neither Vettel nor Leclerc finished the race, which was Ferrari’s first double retirement at Monza for 25 years. On that occasion they had at least been running one-two, before Jean Alesi’s onboard camera fell off and smashed Gerhard Berger’s suspension, prior to Alesi’s retirement from the lead with a wheel bearing failure.

Finally, the mid-race red flag meant we saw the first use of F1’s recently introduced rules allowing standing starts after race suspensions. The race therefore had two standings starts, which last happened at the Belgian Grand Prix in 2001.

Have you spotted any other interesting stats and facts from the Italian Grand Prix? Share them in the comments.