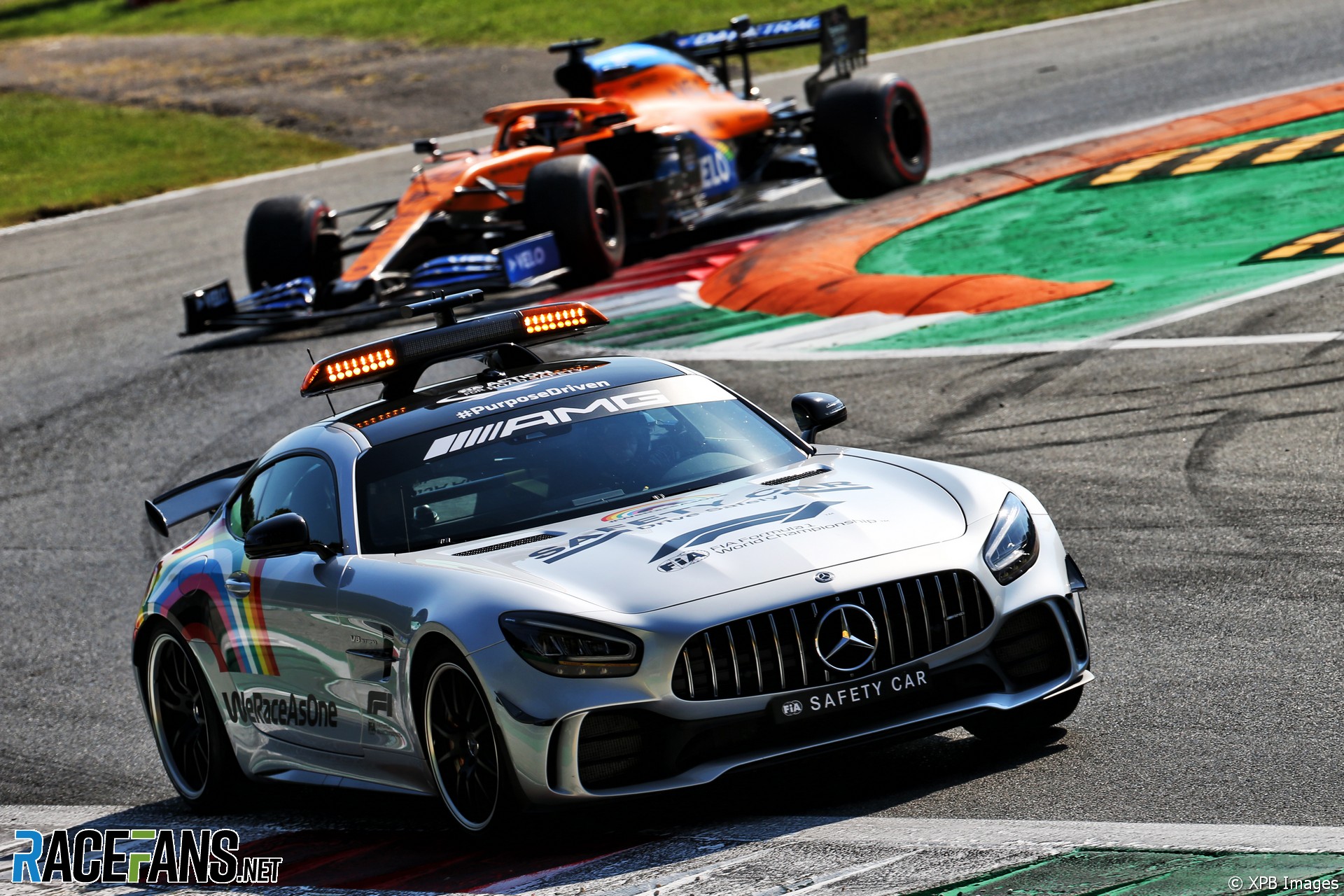 Carlos Sainz Jnr admitted he was frustrated by race control’s decision to red flag the Italian Grand Prix, which allowed rivals ahead of him to change tyres without pitting.

The McLaren driver ran second in the early stages. Following the Safety Car period, when he and several other drivers pitted to change tyres, he was poised to inherit the lead, as the drivers in front of him were all still on their original tyres apart from Lewis Hamilton, who was due to serve a penalty.

However the race was then red-flagged due to Charles Leclerc’s crash. This meant the drivers ahead of Sainz were able to fit fresh tyres without pitting.

“Lucky, lucky fuckers,” fumed Sainz on the radio when the call was made. “Why do they put a red flag, come on. Let us race.”

Sainz explained his frustration following the race. “We didn’t expect to be that strong,” he said. “Especially what I didn’t expect is for everyone behind us to not be able to overtake us and to open that five-second gap that gave me that buffer before the first stop.

“Then the Safety Car came out and I knew I had lost all that hard work earned. And then I very quickly realised that Lewis was going to get a penalty and I would have been the virtual race leader on the fresher tyres. I just had to go through the field and get myself to first and push like like mad.

“But the red flag came out. It was a rollercoaster of emotions because I was then lying in sixth with the same tyres as everyone in front of me, even on a used tyre for me from the Safety Car, and I was a bit angry and a bit disappointed, to say the least.”

Sainz was able to pass several of the cars ahead of him and closed on race leader Pierre Gasly, but finished close behind the AlphaTauri in second place.

“I managed to recover and nearly made it,” he said. “But I think we can be proud because today I left nothing on the table in Monza. So I’m going to be calm that I know I didn’t leave one single tenth out there.”

He said it was difficult to attempt a pass on Gasly because his rubber was more worn.

“My tyres were four laps older and obviously I was struggling also,” said Sainz “The pace we had today was incredible. The gap I managed to open to the rest of the midfield in the first stint and after that red flag, managing to go through the five cars that I had in front to end up chasing Pierre definitely felt really nice and felt like I had a good shot for victory.

“Then once I got to 1.5 seconds I got stuck. The tow as we see now with these cars and the dirty air just starts affecting you a lot in traction, braking, meaning lock-ups, oversteer. I think we were both rallying a bit for a minute because we were struggling with tyres. But I’m happy to finish in a second.”