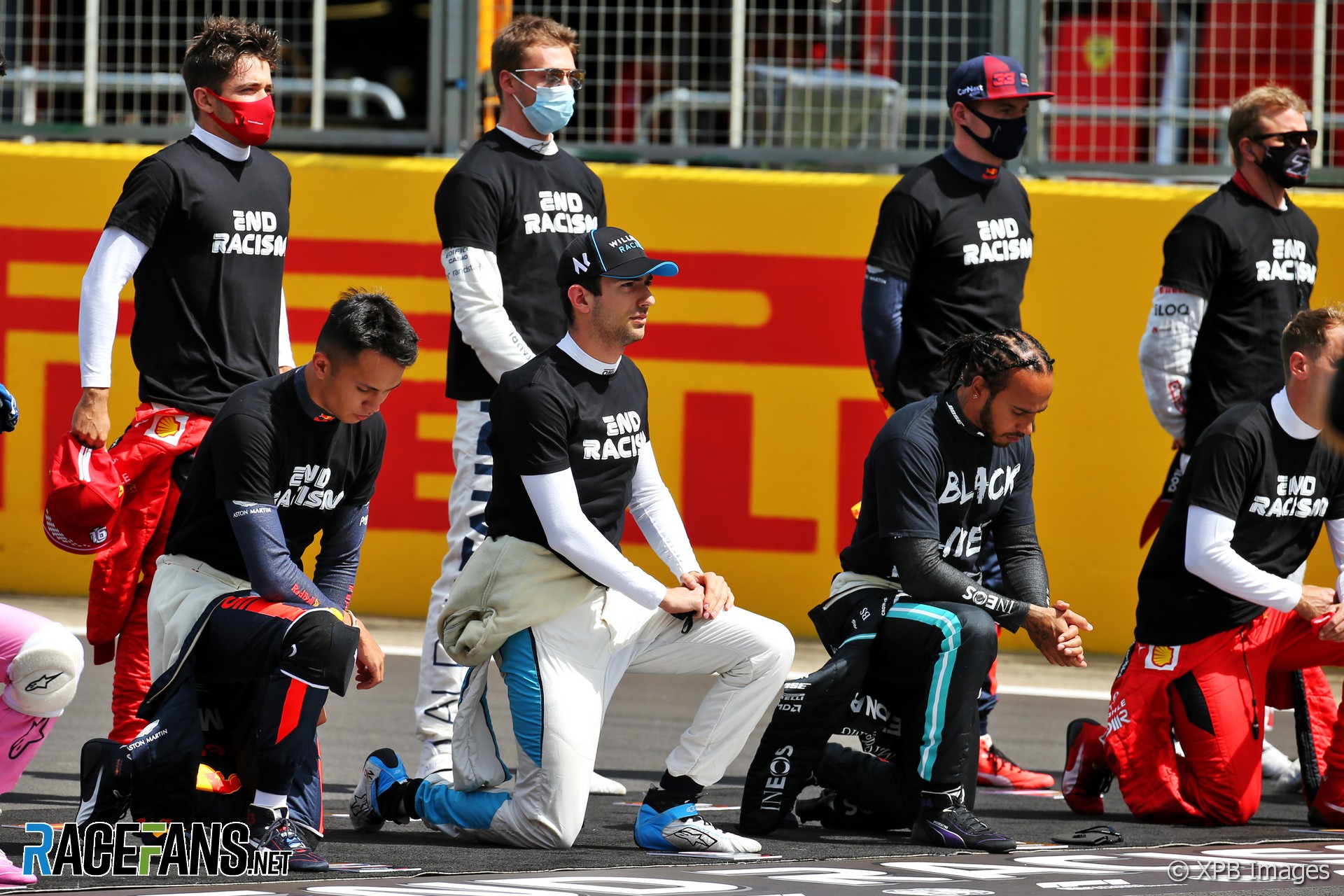 Lewis Hamilton praised F1’s new official ‘end racism’ observance which took place before yesterday’s British Grand Prix but queried why some of his rivals do not join others is ‘taking a knee’.

After Hamilton and other drivers criticised the rushed arrangements for a similar gesture ahead of the Hungarian Grand Prix, this weekend’s ceremony was given a dedicated slot and formal structure communication by the FIA.

“I think that Formula 1 did a much, much better job after a lot of discussion, a lot of talking last week about how we can come together and do a better job,” said Hamilton after the race. “You could see [it] was a lot more professional.”

The FIA advised drivers of various “suggestions” for how they could indicate their support before the race. This including ‘taking a knee’, as the majority of drivers have done since the season began.

The gesture has become widespread in other sports. Teams in Premier League football, the National Basketall Association and many other leagues have kneeled in unison prior to games. Hamilton questioned why this isn’t the case in Formula 1.

“I’m not going to tell you what my opinion on whether or not everyone needs to or not,” he said. “But if you look at all the other sports, look at basketball, you look at football and Spanish teams, Italian teams, teams all over the world, no matter what nationality or mixture they are, they’re all doing it united. You’ve got players from Russia you’ve got players from Spain.”

Some drivers who haven’t taken a knee say they prefer not to because they are concerned how it would be interpreted in their home countries. Hamilton pointed out other sportspeople from the same countries to not appear to share those concerns.

“When the reason for perhaps not doing it is how you think it will feel how would it be perceived in your country, all you have to do is look at the other sports because they are doing it. So I do hope that bit by bit we can come more and more together and more united.”

During Sunday’s end racism ceremony Kevin Magnussen, who has previously taken a knee, chose not to, joining six other drivers who haven’t done since the season began. Hamilton indicated his gratitude to all the drivers for joining in the new ceremony, which featured video of all the drivers talking about the importance of equality.

“I’m really proud of all the drivers wearing the ‘end racism’ T-shirt,” he said. “I think there’s progression.

“I don’t know why Magnussen hasn’t [taken a knee], I have not spoken to him. But bit by bit I think we’ll just try to improve each other’s understanding.

“The most important thing is the drivers continue to have respect for each other, I think, which we do. Maybe there just needs to be more conversation. I know that Formula 1 hasn’t spoken to any of the drivers and no one else perhaps probably has spoken to them individually.”