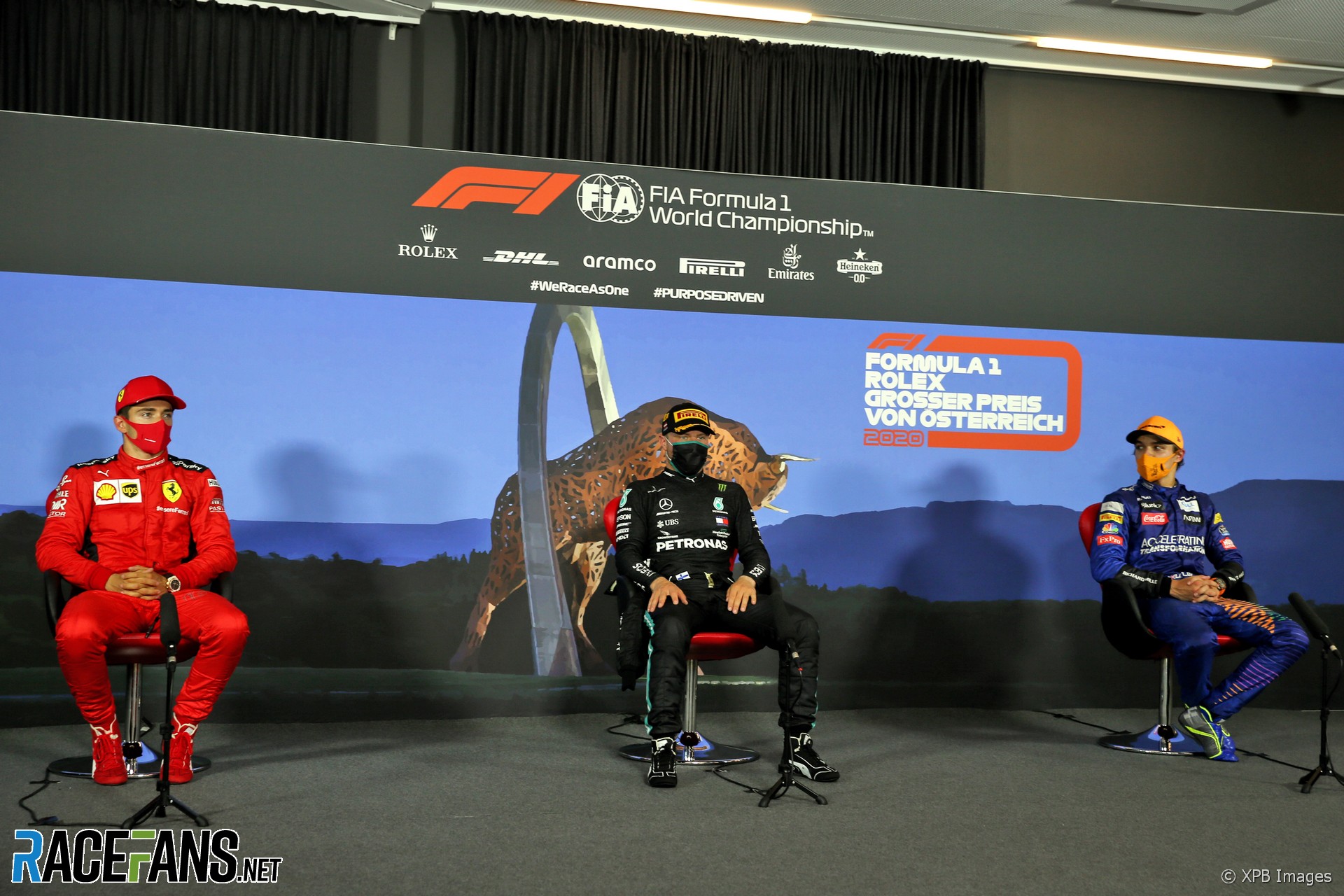 When the invitation to join the select media contingent at Formula 1’s return to action in Austria arrived, the initial emotions were of palpitating excitement and of a feeling of honour at being included. F1 history was, after all, going to be made and I desperately wanted to be part of it, to form part of that celebratory group.

Then reality hit, as it was obvious that no paddock access would be permitted. All media work would be conducted via video conferences open to all FIA-accredited media.

What about, say, meeting with a team source on a Wednesday evening at a restaurant somewhere convenient? This was strictly out of the question, we were told.

So, no tangible benefit in being there at all, then? ‘It would be remiss of us to suggest that there would be any major benefit’, was the gist of the response.

The FIA would attempt to include the odd extra session for those present, I as told, but even these could not be guaranteed. So I tapped an associate who decided to take up an invitation and with whom I share news during ‘normal’ events.

It was clear there would be little if any editorial advantage in signing up for three races on the bounce, included in which are regular Covid tests and complex travel and accommodation arrangements for 19 days, 12 of which spent in tightly controlled media ‘bubbles’ spread over three events. The costs of attending would be little changed.

My business is F1 journalism and as such my primary duty is to objectively report on the sport, and thus it was with no little regret that I declined the invitation. Of course the overriding concern was not to deprive readers of coverage. In the event I could not pinpoint a single instance where weekend reportage suffered unduly, as there were no real ‘scoops’ about, but as always please be the judge and share your comments below.

In addition, the overriding advantage of being on-site as per ‘normal events’ – namely investigative journalism through personal interaction, my major focus – would prove impossible under the restrictive circumstances. This was borne out by comments made to me by some of those in the media who did attend.

There is little doubt, though, that good old-fashioned journalism has suffered as a result of the restrictions imposed as a consequence of Covid. The juiciest stories are generally obtained by word-of-mouth, by wandering through the paddock and picking up a morsel in discussion, or a titbit over coffee. That has been my tried and trusted modus operandi for over 20 years: I generally spend up to 50% of non-track time in the paddock.

Off-the-record chats cannot happen when the only contact with team members comes via group video calls. Similarly, there’s no chance of being given a glimpse of a revealing document or photograph in an environment where everything is being recorded.

These conventional routes of information from source to journalist have served me well. F1’s prize money information has come my way in discussion through sources showing me documents without providing copies. When we broke the news of Force India’s unravelling financial problems in July 2018, it would not have been possible without personal contact with a plethora of sources from whom to glean and/or double-check information.

The Ferrari fuel flow information? That came via an engine specialist who happened to be in the paddock and approached me, as did the entire background to the 2021 regulatory package, about which we variously ‘scooped’ items. Concorde Agreement progress? Off-record or non-for-attribution information was shared over coffee.

Our scoop on Toro Rosso’s change of name to AlphaTauri in Russia last year was ‘dropped’ by a source over breakfast. During pre-season testing earlier this year a single walk up the paddock during the DAS controversy provided sufficient material to write a full analysis; double-checking the information required another tour. F1 is a massive global sport but a very small world, and personal contact is absolutely crucial to investigative journalism.

In the end 22 reporters across five different language groups took up the FIA’s offer. How long all will consider the benefits justify the costs remains to be seen. Interestingly, Reuters, BBC News and The Times chose to report remotely, as we did. Cost-saving is not the exclusive preserve of teams.

Our decision not to attend was the product of weeks of deliberation and followed assurances that all remote conferencing systems – including interactive facilities during press conferences, which we took advantage of – would function as intended throughout all sessions. This represented a significant connectivity challenge in the rural location of Red Bull’s superbly equipped circuit.

An added complication was that on Sunday evening four (major) teams hosted their media sessions at precisely the same time. Hopefully that oversight has been noted for this weekend…

During the weekend four platforms were in use: F1’s own system for official FIA sessions, Zoom (six teams), Teams (three) and Webex (Ferrari). No wonder Zoom became the preferred videoconferencing tool for many during the ‘lockdown era’, as it proved superior to the other two platforms used by the teams. F1’s system also proved stable throughout.

To get all systems up and running, adapt existing procedures for remote working and ensure that 10 teams – all with individual media requirements – were up to speed was hardly the work of a moment. A series of weekly conferences was convened at which the procedures were thrashed out. The bottom line was that it all worked.

Another assurance was that critical documentation flow and access to media television and timing channels worked remotely with secure access provided to accredited outlets. File-sharing was arranged, and photos and sound files distributed accordingly.

Despite pre-event nerves, everything worked as intended at the first time of asking. Credit goes to all involved, but particularly the FIA and F1 media teams, who worked diligently to ensure a smooth experience.

The arrangements for media was just one aspect of an entire weekend which was uncharted territory across the board, whether for the promoters, team bosses, drivers, officials and marshals. Many were highly complimentary about the way the Austrian Grand Prix was handled. The proceedings could not be faulted, save for a few (legitimate) protests concerning matters on the track.

If though, all went smoothly in Austria, the same could certainly not be said about F1 TV Pro, which buffered non-stop on Friday and Saturday accompanied by drop-outs, then failed to connect totally at the start of the race. Many of our readers reported similar problems.

After dropping in and out three times on Sunday, F1 TV finally settled at a 10-second delay, but visuals seemed to drag at inopportune moments. Was it me or the television? I asked my wife, who, too, reckoned it dragged in comparison with the other feeds. Given that the service has been under development for almost three years there really is no excuse, particularly given the heavy subscriptions required. Will F1 TV Pro ever work, as we asked previously?

F1 TV Pro’s erratic service meant I turned to my fall-back, RTL. Through gritted teeth I sat through countless commercials offering big cheques in exchange for texted answers. All the while I wondered what action I was missing given the producer’s talent for hitting the button marked ‘Ad’ at critical times. Most German fans are no doubt rejoicing that Sky has the deal from 2021 even if it is a pay service.

Thus I watched the on-track sessions on three screens: RTL on big TV, media centre (unilateral) feed on a laptop and F1 TV on a second laptop. The difference in lag across the three broadcasts was remarkable: RTL was ahead by approximately a minute from the unilateral feed, in turn 20 seconds up on F1 TV Pro once that kicked in.

All of which begs two overriding questions: Does the media stand to gain anything from attending Closed Events, and could one cover an entire season remotely using technologies as provided from Austria, particularly after the world returns to ‘normality’?

There is no doubt that, with improved cost-to-benefit ratios, it would always be preferable to attend events. The good news is that restrictions are likely to be lifted – possibly from round four – and that, of course, changes the situation. Even if the paddock remains out of bounds, merely being able se folk in person – rather than through the selective prism of a camera – always provides invaluable pointers.

A particular issue for the media with the first three races is one of logistics. Spielberg is situated 300 kilometres from Vienna and civilian aircraft are not permitted to land at the local (military) airfield without permission. This was, of course, granted for teams and officials, but the media flies regular commercial – and there are currently few regular flights in and out of Vienna. The next issue is how to get to the Hungaroring for the third round.

Silverstone poses no such issues for British-based media – although long daily commutes may be required – and thus the media contingent is likely to increase, FIA permitting. Barcelona, too, involves few logistics challenges. Hopefully matters are easier by Spa and Monza and whatever else follows, even if regular paddock access itself remains largely restricted for a while yet as seems likely.

The bottom line is that there are no regrets – aside from personal ones as a fan of the sport, but that should not be the overriding criterion – over skipping the first three Covid-19 grands prix. But the sooner the entire media corps returns to action, whether in stages or in rotating ‘shifts’, the better for the entire F1 fan base.

All things being normal there is absolutely no substitute for not being at events. But things are currently far from normal and one hopes fervently that what is currently referred to in many circles as ‘new normal’ is soon relegated to ‘old abnormal’.

As the first global sport to be staged after the pandemic engulfed our world, F1 has clearly played its role in restoring a longed-for sense of normalcy among its millions of fans. Numerous photos and visuals of masked F1 personnel captured during the weekend provide a powerful and historic reminder as to the seriousness of the pathogen, and these will keep society on guard for generations to come.

Every time a fan sees a visual of a masked driver his first thought will likely be ‘Covid’. Imagine the fans of tomorrow questioning such images in 20 years’ time.

The entire F1 family, led by FIA president Jean Todt and F1’s chairman and CEO Chase Carey, deserve enormous credit for resetting the sport as speedily and readily as they did, in the process proving that F1 is at its absolute best when the adversarial chips are down. Of that every single person who was present in Spielberg during the weekend – in whatever role – deserves to be enormously proud.