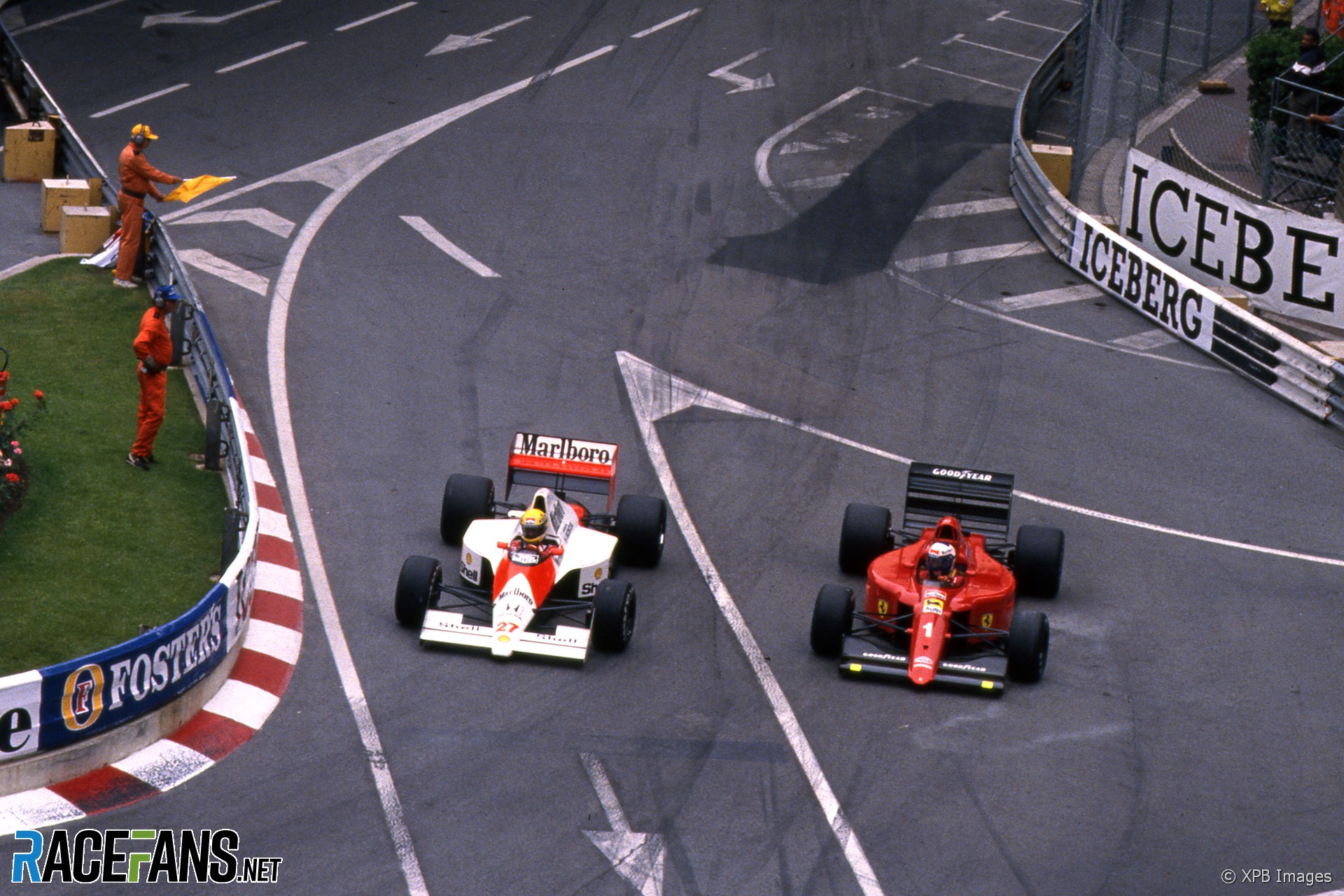 The Monaco Grand Prix was red-flagged after a collision blocked the track on the first lap of the race on this day 30 years ago.

The interruption helped Ayrton Senna secure his third win on the streets of the Principality, and break clear from rival Alain Prost in the fight for the 1990 world championship.

Senna arrived in Monaco with a slender, one-point lead over Prost’s Ferrari and Gerhard Berger in the other McLaren. Riccardo Patrese was fourth, counting just the nine points he’d scored by winning the previous round at Imola.

A massive entry of 35 cars contested the 26 places on the grid. Nine cars therefore contested a separate pre-qualifying session, the top four from which would join the other 26 for the rest of the race weekend.

Bruno Giacomelli unsurprisingly failed to make the cut in the sole Life entry. He did manage to cover eight laps, which was more than the car had managed in any of its previous outings, but its unusual W12 engine failed during one qualifying effort.

Claudio Langes failed to pre-qualify for all 14 of his grand prix appearances in 1990. On this occasion an oil leak stopped his Eurobrun. His best time was nearly five seconds slower than team mate Roberto Moreno’s, but almost six seconds quicker than Bertrand Gachot’s Coloni-Subaru and nearly eight seconds quicker than Giacomelli.

AGS pair Yannick Dalmas and Gabriele Tarquini also failed to progress beyond pre-qualifying. The latter missed the cut by less than four tenths of a second after suffering a suspension failure on his JH25.

The grid was decided over two timed sessions. Moreno provisionally qualified the Eurobrun on Thursday, but slipped to last as the track improved two days later. Similarly Olivier Grouillard, 18th in the sole Osella on Thursday, failed to qualify after driveshaft breakages scuppered his Saturday running.

Mauricio Gugelmin also failed to qualify his Leyton House. The last non-qualifier was a surprise. Michele Alboreto, who had nearly won the race for Ferrari five years earlier, missed out on a grid place by one tenth of a second following clutch and battery problems in his Arrows.

David Brabham did qualify, meaning a Brabham driver in a car bearing the family name started a race for the first time since his father bowed out of Formula 1 at the end of 1970.

Senna claimed his 44th career pole position and third in a row in Monaco. Prost joined him on the front row, bumping the much-fancied Tyrrell of Jean Alesi back to third place by two-hundredths of a second. Riccardo Patrese’s Williams made it four different cars in the top four.

The last spot on the grid went to JJ Lehto’s Onyx.

Senna held his lead from Prost at the start. Then as they reached the Mirabeau Alesi sprang a surprise attack on the Ferrari and stole second place with the same verve he had shown while battling Senna for the lead at Phoenix earlier in the year.

However his hard work was undone. Gerhard Berger optimistically attempted to follow him through but succeeded only in knocking Prost into a spin, blocking the track. The race was red-flagged and restarted.

That gave Prost a second chance to keep Alesi behind. This time when they reached the Mirabeau he kept the door firmly closed, obliging Alesi and the rest to follow him around the opening laps.

Alesi’s nimble, Pirelli-shod Tyrrell promised to be just the thing around Monaco’s narrow streets, but Senna made good his escape while Prost kept Alesi behind. The situation finally changed after 30 laps, when Prost’s electronics failed.

Half the field was out before half-distance. Prost joined Pierluigi Martini, who qualified his Minardi an encouraging eighth but lasted just seven laps before his electrics failed. Both Brabhams went out too, including Stefano Modena, who had taken an unlikely podium at the track 12 months earlier.

Three-times world champion Nelson Piquet, never a fan of Monaco, spun out of seventh place on lap 34. He was given a push-start and disqualified under a regulation which had only just been introduced. Senna had been push-started after his controversial collision with Prost at the previous year’s race at Suzuka.

Bottled up behind Thierry Boutsen’s sixth-placed Williams, Nigel Mansell got increasingly frustrated, and eventually hit the Williams at the chicane. That forced him into the pits for a new nose.

Back on track, Mansell worked his way up into the points, the Ferrari’s paddle-shift semi-automatic gearbox, a novelty at the time, proving a boon on a track which required constant changes of gear. He finally made it past Boutsen for fourth place on lap 54, the Williams now suffering engine problems. But Mansell’s recovery effort was scuppered when his electrics packed up on the 63rd lap.

Finally freed of Prost, Alesi left Berger behind and went after Senna, though the McLaren driver was already 17 seconds up the road and continued to pull ahead despite Alesi’s efforts.

But with 11 laps to go, Senna began to feel a loss of power from his Honda V10, and backed off. His progress wasn’t helped by a near-miss with Derek Warwick’s spun Lotus at the chicane. As the final laps ticked down Alesi drew around two seconds closer each time they passed the pits.

Senna’s lead collapsed over the final run to the flag, Alesi drawing tantalisingly close, the lapped Boutsen following them. Senna lost 4.7 seconds over the penultimate lap alone, and Alesi was just a second behind when the chequered flag fell. Without all the time lost behind Prost, how much harder could he have pushed the McLaren?

Berger continued his run of podium finishes for McLaren after 78 uncomfortable laps in a car which was still being modified to accommodate his 1.85-metre frame.

Alex Caffi picked up two points for Arrows in fifth place. The final points-paying position was decided when the last two cars still running collided. Eric Bernard’s Lola tangled with Gregor Foitek’s Onyx, and Bernard emerged to claim sixth. Foitek was the classified finisher, the 20th car to have stopped.

Senna’s win at Monaco 30 years ago was not his most memorable victory at the track, but it continued the his undefeated run at the circuit which lasted until his death in 1994.