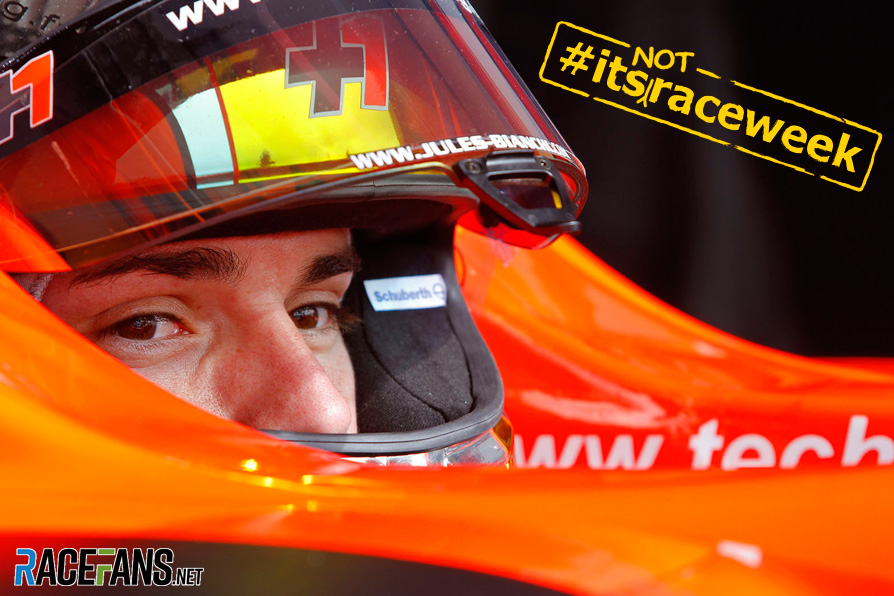 The Circuit de Catalunya has a reputation for producing less than thrilling races.

But it’s not always deserved, as our latest selection for It’s Not Race Week proves.

I’ve been lucky enough to commentate on-site at the track on numerous occasions, and it is a far more interesting track that the television footage often makes out. The cross winds and corner variety can make set-up a nightmare, and for good lap times both drivers and engineers have to be on the top of their game.

Track-side, it is a venue where you can really appreciate the cars at work, my favourite spot being the fast run out of turn nine into the heavy braking zone at turn 10.

F1 cars don’t race well at the track but many other, less aerodynamically sensitive cars do. In particular the old Formula Renault 3.5 chassis, which produced some fantastic races there over the years (sometimes, admittedly, aided by the fact Catalunya usually held the title-deciding round).

In 2012 I was lucky enough to commentate on new fewer than four gripping and at times utterly bizarre championship-deciding series finales within two weeks of each other at the circuit outside Barcelona. The likes of Jules Bianchi, Robin Frijns, Daniil Kvyat and Stoffel Vandoorne were among those disputing the silverware.

Here are video highlights of each, and explanations for those who haven’t seen them below.

More on these races – contains spoilers

The Formula Renault 2.0 title fight came down to a showdown between Stoffel Vandoorne and Daniil Kvyat, the final race being held in changeable weather. Over the course of the weekend it was clear that Kvyat was the driver feeling the pressure, his dour demeanour with the media in particularly winning him no new fans. Nonetheless the deciding race was dramatic and thrilling

The Formula Renault 3.5s were equally entertaining with Robin Frijns and Jules Bianchi going head to head in a contest which ended controversially with one of them in a barrier. An often overlooked detail is Bianchi’s costly unforced spin in Saturday’s race which put him on the back foot.

Bianchi made it into F1 where, very sadly, an untimely end awaited him before we got to see him drive a front-running cars.

Two of that year’s other stand-out talents – Frijns and Antonio Felix da Costa – never got a break in F1. Particularly in the case of Da Costa, it remains unfathomable to me why he didn’t leap into F1 at the end of 2012.

As the laps ticked down and Schiro closed on the championship, Raimondo first made an unexpected appearance in the pits, then stopped at the final corner where he was hit by Schiro, though it didn’t prevent his rival crossing the line and denying him the title.

That same weekend the International GT Open title was also decided in a final twist, this time as Phillip Peter slowed to let his Ferrari team mate and ex-F1 driver Gianmaria Bruni clinch the crown with team mate Federico Leo.

It’s Not Race Week is a new series from RaceFans promoting great races from the past you might have missed the first time around. It is one of several new features we are running as a result of the hiatus in the 2020 motorsport season.

The disruption has had a huge effect on us at RaceFans. Find out more in this short video from the editor: