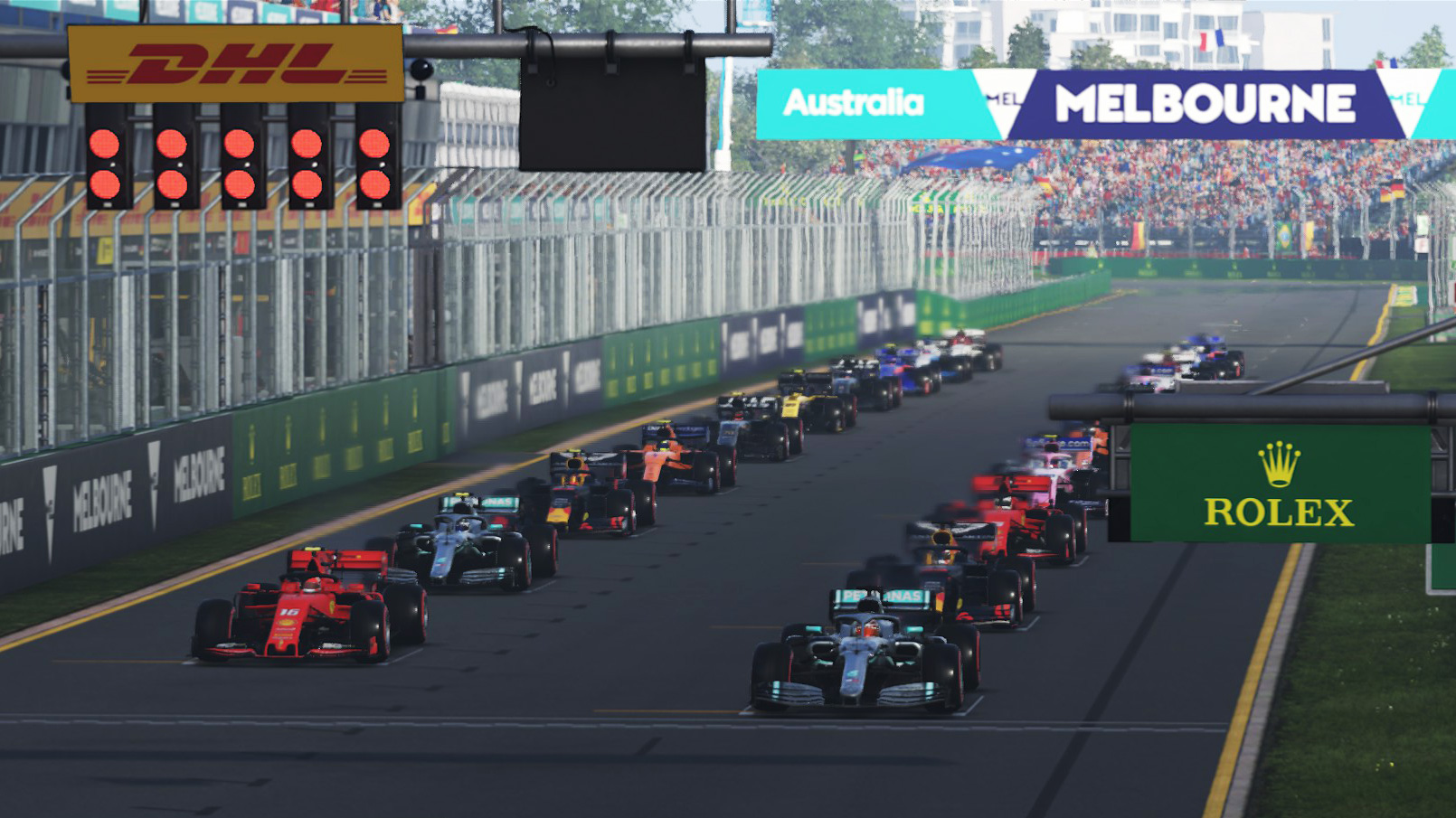 Formula 1’s second Virtual Grand Prix will take place this weekend. A race on the Albert Park, where the real championship should have opened two weeks ago, will take the place of the Vietnam Grand Prix, which should have been held on Sunday.

The championship’s first attempt at holding a virtual race in place of a real-world event attracted a disappointing turnout from the 2020 F1 grid. Just two current drivers joined in. This contrasted with IndyCar’s attempt at a similar race last weekend, which attracted the majority of its current drivers.

The Virtual Bahrain Grand Prix was held on the sport’s official game F1 2019. Paul Jeal, F1 franchise director from game maker Codemasters, explained in an exclusive interview for RaceFans why F1 drivers largely snubbed the race, and why he’s hopeful that will change over the coming rounds of the championship.

The late announcement of the race – details of it were only made public two days before the event – inevitably contributed to the limited turnout among the drivers. Some were also concerned about being ‘shown up’ by top-level gamers.

“Obviously the dream scenario is you get all 20 F1 drivers racing virtually against each other,” said Jeal. “But Formula 1’s a little bit unique in that some drivers are very engaged in that world and some aren’t.

“I think in any sport there’s a lot of people wanting to put their best foot forward, so to speak, so I’m sure there’s some nervousness for people who perhaps don’t play video games or haven’t played in the past to sort of get involved, certainly on that immediate timeframe.”

The growing restrictions due to the global pandemic added a further limitation. “We had people spread out all across the globe, some had kit, some didn’t, some had PS4, some had PC, so just trying to mobilise it quickly was a real challenge,” Jeal added.

“Obviously the situation that we find ourselves in globally with lockdown is certainly adding to the challenge. Carlos Sainz [Jnr], I think he was wanting to get involved but he’s stuck over in Spain and his rig’s in London. One of our guys used to used to work in Esports in Spain so he’s been doing some digging to see whether he can help with various bits and pieces. Even that’s a challenge because I think around the world people aren’t probably really wanting to invite a load of tech guys to come into their houses and set up rigs and stuff.

“So it’s probably going to be something which takes a little bit of time just to see through. But I would certainly hope that we would see a couple more F1 drivers, shall we say, in this weekend’s race than the first one. That’s certainly the ambition.”

F1’s usual Esports events are held in a single location, meaning players can be networked together locally. The Virtual Grand Prix series has the added challenge of being held remotely, meaning the drivers have to handle any technical problems themselves.

“The hardest thing is that the Esports guys are all PC – or whatever – nuts. Tech nuts. They understand updating drivers, hardware, firmware, what issues [there] are.

“When you’re coming to people who turn their PCs on a lot less frequently, aren’t as used to games, in the PC world especially there’s a lot of stuff where you can see out-of-date drivers. Trying to talk people through a lot of fairly tech-heavy stuff obviously takes a little bit more time. Every time you get a new driver on the grid there’s a learning curve.

“Some of these guys are mega-stars, they’re not just available 24-seven for us to pick up the phone and guide them through some of this process.”

However one notable driver who does have the necessary equipment and regularly races online, Max Verstappen, chose not to take part. The Red Bull racer said he “doesn’t play that game and I would have to adapt to it” and didn’t want to be “running around the back”.

While Jeal doesn’t expect Verstappen to take part in this weekend’s race, he said the point of the Virtual Grand Prix series isn’t to have top F1 racers bringing up the rear behind elite Esports racers.

“When you race in or play any video game, each one’s got its own unique way of playing, I suppose, and you can only devote a certain amount of practice to any game. So I know he’s very, very serious with a lot of his iRacing and rFactor stuff that he does with Team Redline. So he’s probably in virtual championships and wanted to dominate that.

“I think probably a small part as well, he probably thought that the Esports guys were going to be involved. I think the quote I read on your website was that he didn’t want to be rattling around at the back.

“We were hoping, once we go through these first few races and you’re seeing, actually, it’s the F1 drivers at the front, all of the ‘real motorsport’ guys at the front. So I hope over time that people will see that and start to gravitate more towards it because, what we’re not trying to do is we don’t want them to get destroyed by Egamers. That’s certainly not what we wanted in our series.

“I think if you’re a fan tuning in and Max Verstappen is in 16th place, that’s not really what you’re tuning in for. So I hope over time, actually, he’ll be more inclined to take part.”

Aside from the practical obstacles there were other, less tangible, reasons why some drivers – and their teams – were reluctant to participate. “When you’ve got certain teams that have had pretty major rebrands from last year to this year, sometimes that can have an impact – as well as to just whether they want to get involved – with old logos and sponsors and partners and all that type of stuff. So it’s quite a fluid situation based on individual circumstances.”

Codemasters are currently developing the forthcoming edition of the game, F1 2020, and are looking into whether up-to-date graphics from that can be ported into the current version to allow drivers to race in their latest liveries.

“From our point of view we make an annual, iterative game,” Jeal explains. “So lots of the stuff that goes into one game isn’t necessarily cross-compatible with a previous one.

“I certainly think there is a way of doing it, it’s just how quickly we can mobilise that at the same time that we’re trying to not impact this year’s game so much.”

Similarly the two new circuits of F1 2020 – Vietnam’s Hanoi street track and the remodelled Zandvoort in the Netherlands – could be added so the new drivers can race on them. In the meantime, Australia’s Albert Park circuit will be used for this weekend’s Virtual Grand Prix which will run in the Vietnam Grand Prix’s slot.

“The naming’s slightly weird because I think Formula 1 are naming it based on the real grand prix season and so it’s the postponement of the Vietnam race,” said Jeal. “Obviously the Vietnam race doesn’t exist in F1 2019.

“One of the big things that we’re looking into is obviously can we race the new tracks, retrofit them into it or build on the old game, which is looking to be a challenge given the size of those.”

However Codemasters face the same obstacles most British-based companies do at present: Their workforce is based at home due to movement restrictions as a result of the pandemic.

“It’s going to be harder than usual for all of us to work at full capacity given the current situation,” said Jeal. “So I guess we’re just treading through that at the moment and working out what’s possible and what’s not. There will be an iterative roadmap, I’m sure, of how can we get slightly more of the branding across as we go forward throughout this time line.”

With more time to confirm this weekend’s entries, and the knowledge the Virtual Grands Prix will run for several more weeks, Jeal is hopeful of seeing more drivers join the fun.

“It literally was three days I think people had to fill the [first] grid, figure out deals and get it to them and stuff. Certainly the lead time is a little bit more relaxed this around.

“We don’t fully know what the grid is yet but some of the slots are beginning to fill up. I think Lando [Norris] was doing his best on his stream to call others and invite them in. I hope that a couple of those will come in and race as well, see that he’s having fun, see that it’s reaching a lot of people.

“Having a few more F1 drivers in there is obviously the goal. Lots of the motorsport guys did really well so that was good as well, that’s certainly what I’d like to see.

“Obviously this is a format that’s here to stay for an unknown period of time right now so I think the guys who get on board and embrace it early I hope will encourage others to take part.”

19 comments on “Interview: How Codemasters are trying to get more F1 drivers into Virtual GPs”