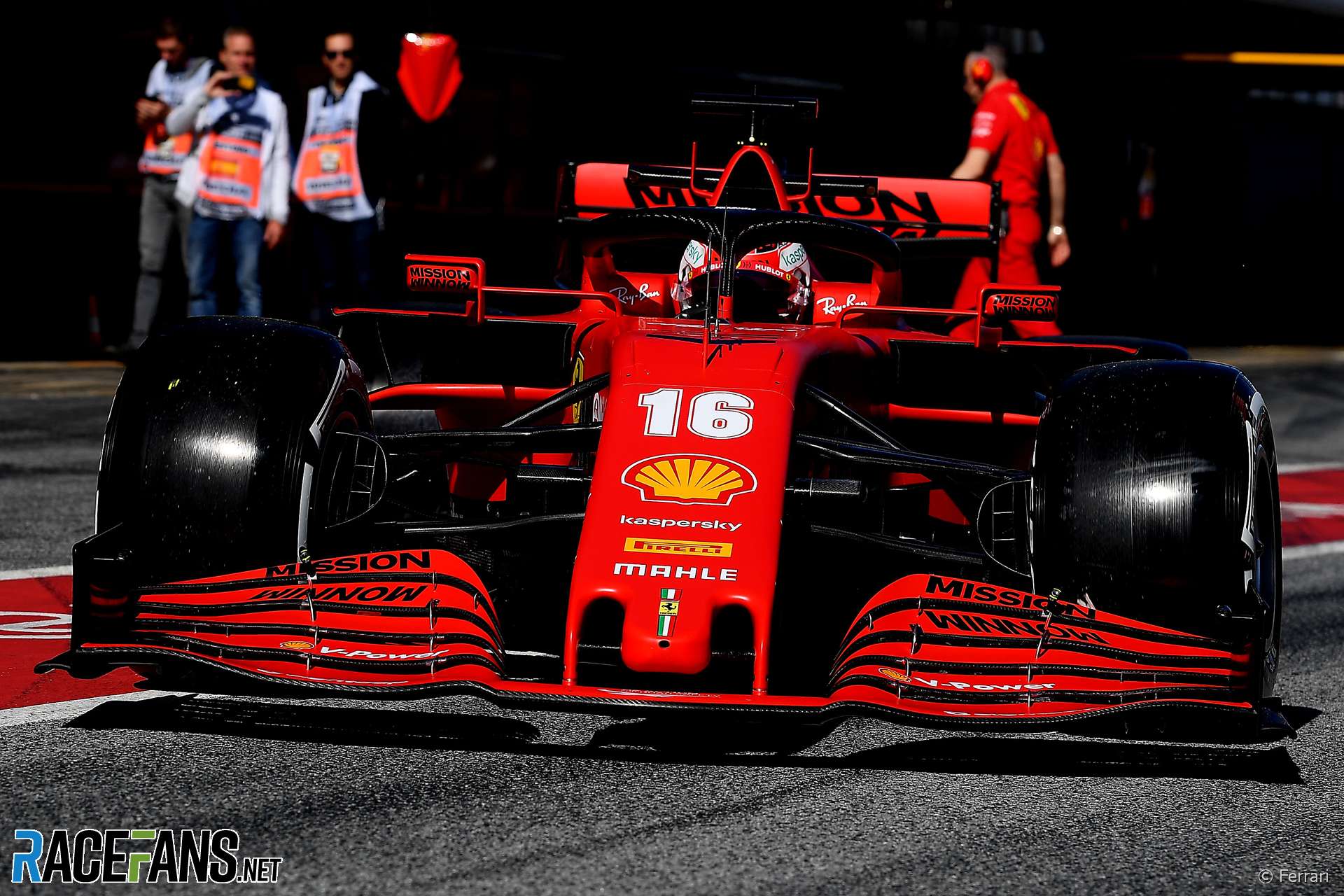 With 10 minutes to go in the final pre-season test last Friday, the FIA issued a statement which shocked and outraged more than half the teams in the Formula 1 paddock.

Mercedes, Red Bull, McLaren, Renault, Racing Point, Williams and AlphaTauri made their feelings known in a strongly-worded statement issued on Wednesday, which the FIA responded to 24 hours ago. But these were just the opening exchanges in was promises to be prolonged hostilities, with sky-high stakes rising on the outcome.

Having spoken to several F1 figures familiar with behind-the-scenes developments, RaceFans can disclose the background to the extraordinary developments of the past week.

As outlined here previously, following the summer break last year Ferrari appeared to have eked out a performance advantage from its power unit. Engine manufacturers are not subject to the same developments restrictions as teams (but will be from next year).

The exact details of how Ferrari achieved its step forward and whether it was legal is shrouded in secrecy and, of course, key to their rivals’ objections.

Prompted by an enquiry from Red Bull, the FIA issued a technical directive following the Mexican Grand Prix, where Ferrari scored its sixth pole position in a row. From the next race at Circuit of the Americas the straight-line superiority of SF90s was not as evident.

A technical insider consulted by RaceFans indicated this was no coincidence. Ferrari faces accusations – as yet unsubstantiated – that it was using some means to bypass the maximum fuel flow rate of 100kg per hour to gain a performance advantage. But how?

The logistics of the one-week gap between the Mexican and American rounds was a complicating factor for the FIA as it tried to work out what Ferrari was doing. As a result, they considered it inopportune to seize and seal components. Come Austin, Ferrari were suddenly back to their pre-summer break pace and seemed to go off the boil thereafter.

Suspicions and accusations lingered through to the Abu Dhabi finale, where Ferrari was embroiled in another furore over its power unit. Before the race began Charles Leclerc’s car was stopped for a random check and found to have 4.88kg more fuel onboard than the team had declared. The team claimed “a measurement discrepancy” and was fined $50,000, but Leclerc kept his podium place behind a Mercedes and Red Bull. The question remains: Why was team-mate Sebastian Vettel’s car not also ‘spot-checked’?

Competitor teams were allegedly dissuaded from appealing the verdict, having been given assurances that the FIA had the fuel system investigation well in hand. They did, though, point to recent exclusions from the results of Renault and Haas for technical infringements, and questioned why Ferrari had been treated leniently. Ferrari’s breach was considered a sporting, rather than technical, infringement.

So to last Friday, and the FIA’s bombshell announcement. Ferrari customers Sauber and Haas have kept low profiles, but one wonders how they feel given that regulations demand engine parity between teams using a common supplier, and they clearly did not benefit from the same ‘tweaks’.

But the contingent of seven non-Ferrari teams went absolutely ballistic as the sporting and commercial ramifications hit home. As we will see, however, while there are seven teams, there are seven different agendas.

According to one team boss, Mercedes Motorsport CEO Toto Wolff corralled the seven non-Ferrari teams via a conference call on Sunday during which the decision was taken to voice their collective objections to the secret settlement struck between the FIA and Ferrari. The vexed teams had first voiced their concerns about Ferrari’s performance gains as far back as August.

“Had the FIA investigated Ferrari off their own bat, then a secret deal could possibly – I stress possibly – be acceptable,” said the team boss, speaking on condition of anonymity due to the sensitivity of the matter. “But we teams pushed and pushed for clarity, then we’re all left out of the detail.”

During the teams’ conference call consensus was reached to issue a robustly-worded collective statement in which all teams record “their strongest objections to the settlement”, and their intention to “to pursue full and proper disclosure in this matter” and that they “reserve our rights to seek legal redress.”

In addition, it was decided to address a joint letter to FIA president Jean Todt and chairman and CEO of F1 Chase Carey, in which “over 30 questions were addressed to them”. A source stated that “we demanded direct answers from the FIA to some pretty hard-hitting question about the deal, and questioned (F1 commercial rights holder) Liberty’s as to its role in the matter.”

Carey was in turn asked what the role and involvement of F1 had been, whether F1 believed that the matter had been handled correctly, whether the company had faith in the regulator – and whether the FIA is a fit and proper regulator – and why the prize pot should not be redistributed in view of the fact that Ferrari had not been able to prove that its car complied with the regulations at all times.

Ferrari will have received round $200 million in prize monies from F1 last year. Imagine the windfalls for the other nine should the Scuderia be forced to forfeit its income, as McLaren was after being found guilty of cheating in the ‘Spygate’ case of 2007. The potential legal ramifications lawsuits for the New York Stock Exchange-listed company (RACE) would not necessarily end there.

Tellingly, Red Bull F1 consultant Helmut Marko believes that the main team could be due an additional $24m should the prize fund be redistributed, which suggests that AlphaTauri would be in line for at least half that. The matter is complicated by the fact that in addition to its share of prize monies Ferrari also receives a long-standing team bonus and a historic constructors championship bonus, and the last two amounts are not performance-linked.

Still, the pure performance prize money received by Ferrari runs to $90m, which in itself represents a neat bonus for nine teams regardless of how it is split. Addressing the letter jointly to the FIA and F1 suggests that the seven teams hold both responsible but will seek commercial redress from Liberty – and hence the questions as to the role of F1 in this matter.

A source described the affair as “potentially Ferrari’s Dieselgate” – a reference to the emissions scandal which has cost Volkswagen Group billions in fines. Whatever, the futures of Mattia Binotto (managing director of Scuderia Ferrari) and Ferrari president Louis Camilleri are clearly in question, whether in Turin (where Exor, Ferrari’s main shareholder, sits) or New York.

The only team which finished in front of Ferrari in last year’s championship, Mercedes, does not stand to potentially benefit from any retroactive sanction against the Scuderia in the same was as their rivals. But there are suspicions Wolff has an axe to grind with Ferrari after the Italians vetoed moves by team executives to senior F1 positions for a period of three years, thus depriving Wolff of an opportunity to replace Carey, revealed by RaceFans last year.

Racing Point has a technical collaboration with Mercedes, while team owner Lawrence Stroll is close friends with Wolff – “After Niki [Lauda] died, Lawrence became Toto’s new travelling companion,” a source recently said – and thus full support is to be expected from that quarter apart from any potential commercial windfalls, while Williams can do with every bit of cash going.

Renault is, of course, desperate to prove its Japan disqualification was unfair, plus Ferrari exclusion would see the French team place fourth – equalling its 2018 classification – which sits better in the boardroom of its beleaguered parent. Red Bull owner Dietrich Mateschitz would love put one over Ferrari and have Red Bull place second and see AlphaTauri move up to fifth, while an additional $24m (or more) would not go amiss.

And McLaren’s motives? Apart from the money, the team has long agitated for greater regulatory clarity plus there is, of course, potential for the team to place third, a classification it last achieved in 2012. Collectively the team are also concerned that the settlement sets a troubling precedent, particularly with regard to 2021’s Financial Regulations, which will require strict policing.

“If [the FIA] can’t police Ferrari’s fuel system, how can they police Ferrari’s budget cap?” asked one team boss, adding that this was one of Ferrari’s sticking points during negotiations for 2021’s agreements. Seven teams equals seven individual agendas, yet the sniff of money, opposition to Ferrari’s arrogance in constantly demanding special treatment, this secret deal and retention of its long-standing veto right clearly binds them.

So what happens next?

The FIA yesterday issued a reactionary statement in which it clarified its statutory provisions and procedures, stating that it had acted “in the best interest of the championship and of its stakeholders [which includes all teams] in compliance with Article 4 (ii) of its Judicial and Disciplinary Rules”, adding that the confidentiality of the terms of the settlement agreement is provided for by Article 4 (vi) of the JDR.”

Thus, the FIA is convinced that it had acted correctly – which is in turn contested by the ‘Group of Seven’, who have given the FIA (and F1) seven days to respond to their demand for answers. Thereafter it could get ugly, with the most likely scenario being that they demand both full disclosure of the settlement from the FIA, and commercial redress from F1 for any monies they believe are due them.

In terms of the letter, sent on Wednesday morning, the respondents were granted seven days to reply, effectively taking the timeframe to the opening day of the Australian Grand Prix, given that most team bosses will be travelling. That should make for an extremely lively start of the season – should the race go ahead – but it is unlikely that the matter will be resolved in Melbourne.

Watch the next moves by the ‘three Fs’ – FIA, F1 and Ferrari – carefully. Plus, of course, the reactions of Ferrari’s shareholders to what has the hallmarks of a major crisis for the Scuderia.