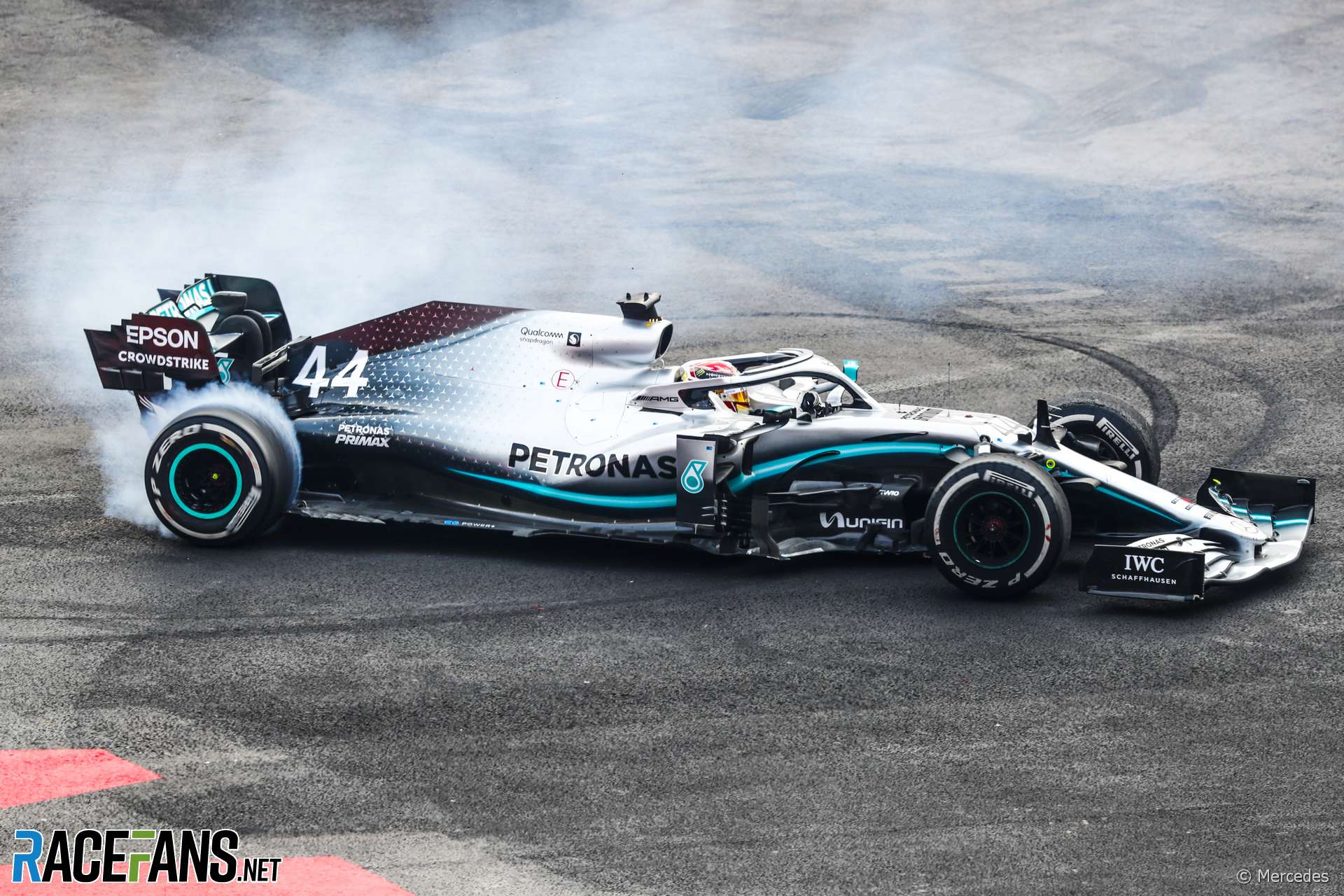 The nature of Formula 1 being what it is, races are normally won by the driver in the fastest car.

For much of the past six seasons, Lewis Hamilton has been in the fortunate position of having that, thanks to Mercedes. But lately Ferrari have begun to show them the way – in Mexico they took their sixth pole position in a row.

While the Autodromo Hermanos Rodriguez is a venue where Mercedes have not excelled in recent years, Red Bull have shone on the unusual track which mixes long straights with slow corners at very high altitude. Max Verstappen, winner of the previous two races at the track, was quickest of all in qualifying.

So for once Mercedes and Hamilton went into a race knowing that two of their rivals were quicker. Yet, in a remarkable turnaround, Hamilton came out on top again, and made his sixth worth championship a virtual certainty.

For that to happen, three drivers had to get out of his way.

Verstappen: Starting on the back foot

Verstappen won pole position, then he lost it.

He was quickest after the first runs in Q1. During the second runs, Valtteri Bottas crashed his Mercedes, which came to a stop against the TecPro barrier at turn 17. The moment the marshal at the scene waved the yellow flag, pole was Verstappen’s.

The warning wasn’t automatically relayed to the electronic timing system, and then to the drivers’ cockpits, because the impact severed a crucial data cable. But, because of this very possibility, a waved yellow flag carries the same force in the rules as a yellow light panel.

Hamilton passed by the scene before the flag came out, but didn’t set a time quick enough for pole position. The only two drivers left, Sebastian Vettel and Verstappen, would both have to pass the yellow flag, and would both then have to lift off – meaning Verstappen would take pole.

But while Vettel lifted off, Verstappen kept his foot in, and improved his time. His carefully-worded, ambiguous answers in the official press conference left it unclear whether he’d seen the yellow flag and ignored it, or just not seen it. Either way, it meant a three-place grid penalty.

That created an all-Ferrari front row – Charles Leclerc ahead of Vettel – and moved Hamilton ahead of Verstappen. The Mercedes driver fought hard to retain that advantage on lap one.

When the lights went out Hamilton got away well, better than Vettel, but the Ferrari driver immediately squeezed him onto the grass. While Vettel followed Leclerc into turn one, Verstappen dived down the inside of Hamilton.

The Red Bull driver was fully ahead in the braking zone for the corner and still had his nose ahead at the apex. He allowed Hamilton room at the exit, but their rear wheels touched which pitched Hamilton sideways. Unable to swing his car left for turn two the pair tangled again and took to the grass. As they rejoined Alexander Albon and Carlos Sainz Jnr passed the pair of them, while Verstappen lost a further place to Bottas.

Verstappen clearly had a quick car under him and was fired up by another setback to his weekend. Despite his frustration, his attempt to wrest seventh place off Bottas was a superbly-judged opportunistic move. That it resulted in a puncture for the Red Bull driver was plain bad luck, as was the fact he had already driven past the pit lane entrance before it materialised. Scratch one of Hamilton’s rivals from the fight for victory.

Two weeks earlier at Suzuka, Ferrari had squandered their front-row lock out, and from halfway around lap one it seemed unlikely they were going to win. In Mexico they successfully held their positions at the start, leaving them well-placed to head off any strategic move from their rivals.

But the sheer speed of the remaining Red Bull put them under pressure. While Vettel kept within range of Leclerc, but cautious of getting close enough to damage his tyres, third-placed Albon was threateningly close, less than a second behind at times.

On lap 14 Red Bull succumbed to the temptation of an early pit stop. Friday had shown graining was going to be a problem as usual, and they were convinced a two-stop strategy would be the way to go. A second set of C3 medium tyres was fitted to Albon’s car, and he was on his way.

Albon came out of the pits behind Sainz. This appeared to be in Red Bull’s plan: Albon’s pit stop was only three-tenths of a second slower than the best of the race, so they must have expected he would emerge behind the McLaren. What they didn’t predict was that Sainz would prove so tricky to pass.

“I was a bit confused because I didn’t think I was racing Carlos,” Albon admitted after the race. “And I don’t think we were.” Red Bull presumably expected he would clear Sainz quickly enough that he would still be a threat to Vettel.

Ferrari were clearly concerned that he would be. But with Vettel so close to Leclerc, pitting him would create a likelihood he would get ahead of his team mate, reversing their running order. Seemingly unwilling to risk this, Ferrari called Leclerc in.

This proved a considerable misjudgement. Albon had lost so much time behind Sainz that Leclerc was actually under little threat from the Red Bull – he came out of the pit some eight seconds ahead.

Worse for Leclerc, he was now locked into a two-stop strategy just as their rivals were beginning to realise a single stop was possible. Worse still, Leclerc found his new set of mediums were not performing as well as his first set. He told his team on the radio they felt “quite different than the previous ones”. From then on he seldom looked like having the pace to join the fight at the front.

Having both cars at the front of the field puts a team in the luxury position of being able to cover off both of the likeliest strategy options. Ferrari may have been wrong-footed by Albon with Leclerc, but they still had Vettel out front, extending his opening stint on soft tyres, preparing to pit just once.

However when to make that sole pit stop proved trickier than usual given the patch information on the performance of the hard tyre. Hamilton was closing on Vettel, but Ferrari were wary of putting the hard tyres on too soon and running out of tyre life at the end of the race.

Worn hard tyres are particularly vulnerable when their temperature drops. Mercedes, however, had a back-up plan. Hamilton and Bottas had each saved a spare set of fresh soft tyres. If they found themselves vulnerable on worn tyres late in the race and a VSC or Safety Car was called in the final laps, they would be able to fit softs and attack.

They were also keeping a close eye on the progress of Daniel Ricciardo, the only driver who had started the race on a set of hard tyres. His lap times were holding up well and he’d risen from 13th on the grid to sixth.

On lap 23 they brought Hamilton in. This was riskily early, committing him to 48 laps on the hard tyres. But it also put Ferrari in a jam: As soon as Hamilton rejoined the track they realised they could no longer pit Vettel and get him out ahead of the Mercedes. At first they told Vettel to pit, but he suggested the team “let him go”, and before the end of the lap they agreed; they didn’t have much of a choice.

Ferrari remained hopeful that Hamilton would, eventually have to pit a second time. That hope faded as the race went on. Vettel eventually made his pit stop 14 laps after Hamilton, but the benefit of fresher tyres didn’t help him to attack when he closed on the Mercedes, even with the SF90’s straight-line speed advantage.

The final laps set up what might have been an exciting spectacle: Hamilton nursing his worn tyres at the front, Vettel closing, followed by Bottas and the two-stopping Leclerc, the latter on the freshest tyres of all. But none could get close enough to seriously attack for the lead.

The speed Verstappen showed on his way through the field to sixth place showed he would have been a contender for victory had it not been for his puncture. He came home ahead of Sergio Perez, who thrilled his home crowd as he took a ‘class win’.

Given what went on in Japan Daniel Ricciardo would have dearly loved to put one over the Racing Point driver, whose team got both Renaults thrown out at Suzuka. But his attempt to dive down the inside of Perez at turn one failed – Perez told him afterwards the move might have stuck if he was still in a Red Bull.

Nico Hulkenberg held ninth as his final lap began, but his tyres were badly worn and Daniil Kvyat was all over him. On their last tour Kvyat had a look at him at turn 16, but tagged the Renault and sent it spinning into a wall. The inevitable penalty, which Kvyat railed against, dropped the Toro Rosso driver out of the points. Pierre Gasly inherited ninth ahead of Hulkenberg, who crossed the finishing line without his rear wing.

Another driver who couldn’t make the hard tyres work was Lance Stroll, who dropped out of the points places in the second half of the race.

The Williams pair had their usual struggle, livened up by Robert Kubica launching a move on George Russell at turn six, his team mate having run wide two corners earlier. The startled Russell had to give way, though he gained the place back when a puncture forced Kubica into the pits. Had it not been for that, both Williams would have led home Romain Grosjean, the Haas driver struggling at what is usually the team’s weakest venue.

Hamilton: Nine fingers on the trophy

A sixth world championship victory is almost assured for Hamilton following his 10th win of the year. He may have expressed doubts about his strategy more than once during the race, but his stand-in race engineer Marcus Dudley and the rest of the team read the day’s proceedings perfectly.

On a weekend when they didn’t have the best car, they ensured they were in position to take advantage if the cards fell in their favour. Remarkably, it happened. And then it happened again. And then again.

Mercedes could easily have left Mexico without getting either car on the podium. Instead they walked off with a one-three. Red Bull and Ferrari will be kicking themselves after that one.