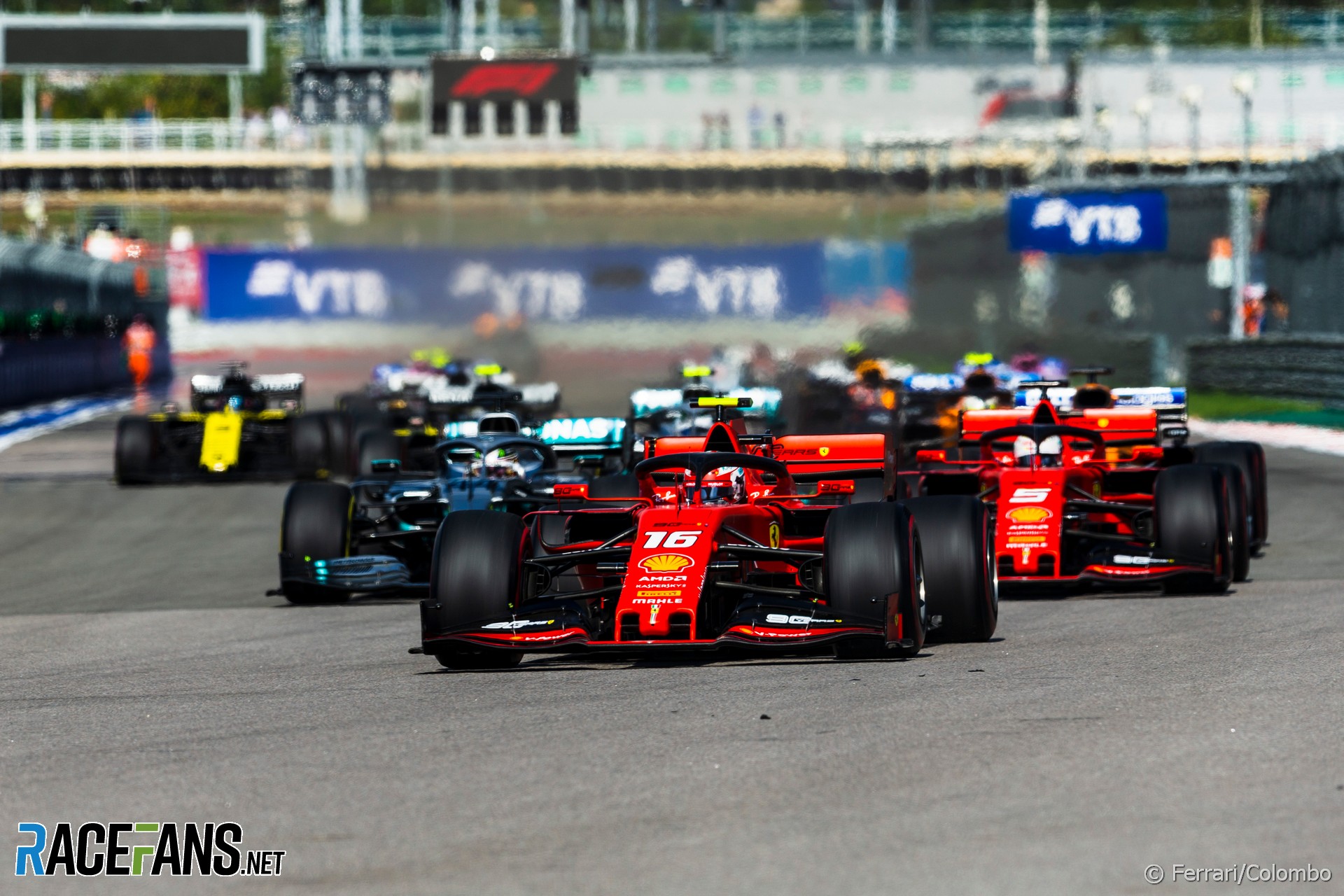 But it was an ill-timed power unit failure which handed a ninth victory of 2019 to Lewis Hamilton.

Ferrari had a plan. Perhaps in retrospect it wasn’t the best. But what is clear is both drivers understood there was an arrangement to choreograph the start.

From third on the grid, Sebastian Vettel passed Lewis Hamilton easily. Vettel, like Leclerc, started from the clean side of the track and had much better grip. He then tucked into Leclerc’s slipstream, and his team mate obligingly left him the inside line and followed him into turn two.

As both drivers and team principal Mattia Binotto later confirmed, this had been planned before the race. Not only that Leclerc would help Vettel get past, but that if by doing so Vettel took the lead, he would be required to give it back to his team mate.

Vettel understood this too. When the race was neutralised by a Safety Car halfway around the first lap, he immediately asked his team on the radio to “let me know on the start”.

Ferrari’s day began to go wrong when, as lap two began, they let Vettel know about the start and he didn’t like what he heard. Before the end of the second lap he was told they would swap positions “later in the race”.

Vettel seemed to be under the impression that the point at which he passed Leclerc on the run to the first braking zone was significant in the agreement with the team. “I was ahead in or after turn one”, he insisted (the overhead camera shows he nosed ahead of Leclerc after turn one, just before they passed beneath the Pirelli bridge).

Binotto was vague about the exact detail of the arrangement, but clear in the team’s interpretation of Vettel’s obligation: “Looking at the start our judgement [was] that the start went as planned and therefore we thought it was right to ask Seb to swap the positions.”

On the second lap after the Safety Car came, Ferrari told Vettel to “let Charles by”. But Vettel resisted, urging the team to let him stay ahead while they extended their lead over Hamilton.

Vettel certainly has previous when it comes to refusing instructions from his team – the ‘Multi 21’ row at Sepang six years ago being one of the most infamous. But so do other drivers.

At other teams, however, senior team staff quickly get involved when one driver isn’t doing as they are told, or has to be told something they don’t like. This was the even case at Ferrari one week earlier, when deputy race director Laurent Mekies smoothed over the situation when Leclerc objected to a strategy which left him stuck behind Vettel.

But no senior figure came on Vettel’s radio to tell him to do as he was told. Even when, having argued against the first two orders to let Leclerc by, Vettel stopped replying to the team’s instructions.

Leclerc had been told Vettel was going to pull over for him and was sitting in his slipstream, wondering when it was going to happen. At one point Vettel told the team to make his team mate “close up” before they switched positions. In response he was told Leclerc was now 1.4s behind and that he should let him by. This was the point at which Vettel went silent.

The swap that wasn’t

The team took the hint. “We are moving to Plan C,” they advised him.

On the face of it, ‘Plan C’ was to bring Leclerc in first while Vettel was left out long enough that he would rejoin the track behind his team mate. This is exactly what happened – Ferrari couldn’t have timed it more accurately.

If this was all there was to Ferrari’s plan it would make a degree of sense. The arrangement for the start of the race appears to have been well-intentioned but ill-conceived, though without knowing its full extent it’s impossible to be certain. Forcing Vettel to give up the lead through the pits was a tough call, but a step any team has to be prepared to take if they are going to make such arrangements.

But on Sunday evening Binotto threw that explanation into doubt by denying the team had used the pit stops to put Leclerc back into the lead. “The undercut was not for the reason of giving back the position to Charles,” he insisted.

As Vettel retired immediately after coming out of the pits behind Leclerc, it’s impossible to know exactly how Ferrari were going to make good on their promise to ‘give back the position to Charles’.

Were they expecting Leclerc to need another pit stop, after which Vettel would have to let him by? That’s extremely unlikely, as it would have dropped them behind the Mercedes. Were they going to see if Vettel overtook Leclerc on the track, then tell him to let his team mate by? That’s scarcely any easier to imagine.

It’s more likely Ferrari were gambling Vettel would be incapable of passing Leclerc and were going to explain away the change of positions in the pit stops the same way they justified depriving Leclerc of victory in Singapore: That it was for the greater good of the team. Binotto said the reason Vettel was left out longer was to decrease the chance of the team losing out to Mercedes because of a Safety Car period.

Of course that ended up happening precisely because of an electrical fault on Vettel’s car failure, which prompted a Virtual Safety Car period under which Hamilton made his pit stop and came out ahead of Leclerc. Whether Vettel’s power unit had a sense of irony or karma depends on your point of view…

One person who did appreciate the irony, and remarked as much on television, was Mercedes team principal Toto Wolff. But afterwards he admitted Ferrari’s latest driver management headache was “a side story from today” and not what won them the race.

Starting the race on the medium compound tyres, which allowed Hamilton to stay out long enough to benefit from the VSC period, was “crucial”, he said. “One of the things that we were looking for or that we were hoping for was a late Safety Car. The medium was able to extend their stint. And that’s what happened, caused by their car failing.”

Wolff selects his words with great care. “Their car failing” was a pointed choice of phrase at a time when Ferrari’s prancing horsepower is overwhelming the output from Mercedes.

The team were doubly fortunate, for having gained the lead thanks to the VSC, they gained a one-two when Leclerc pitted during a subsequent Safety Car period and fell behind Valtteri Bottas. He switched to a set of soft tyres, a decision he justified out of concern he would be vulnerable doing a restart on cold medium tyres. This seems a bit of a stretch – it looked rather more like a gamble to make up places by attacking on soft tyres which failed to come off.

So Hamilton led home Bottas and Leclerc, the latter deciding he couldn’t better the race leaders bonus point-winning fastest lap. The Red Bulls came next, Max Verstappen having found it harder than expected to make his way through the midfield following his five-place grid penalty.

Alexander Albon again made some impressive passes as he made amends for his qualifying crash by bagging fifth place. Having muscled his way by Pierre Gasly, he took Sergio Perez at the restart, then moved by the two McLaren drivers as well.

McLaren continued to reassert themselves in their fight with Renault, and are now 33 points ahead of their engine supplier after Carlos Sainz Jnr took another ‘best of the rest’ sixth place. Lando Norris was unlucky to lose a place to Kevin Magnussen under the VSC, but was nabbed by Perez after Albon passed him.

That meant Perez took seventh but Norris was promoted to eighth after Magnussen was given a penalty for failing to negotiate the run-off area correctly at turn two. The Haas driver fumed over what he called a “bullshit” penalty, while team principal Guenther Steiner said it was the decision of a “stupid, idiotic” steward.

Despite an intermittent power unit problem Nico Hulkenberg used DRS to pass Lance Stroll for the final point. around the same time Pierre Gasly slipped behind team mate Daniil Kvyat and Kimi Raikkonen, the latter recovering from a jump start penalty. It wasn’t a great first lap for Alfa Romeo: Antonio Giovinazzi carried race-long damage after being involved in a three-way collision which put Romain Grosjean in the wall and also forced Daniel Ricciardo to retire.

Williams’ poor season continued. After George Russell went out in a crash which appeared to have been caused by a problem with his car, the team retired Robert Kubica’s FW42 to save parts. They did this on the 28th lap of 51, which raises the question why bother starting the race at all if you’re going to retire just after halfway.

Hamilton’s ninth win of the season makes his coronation as champion seem increasingly inevitable. Even if one of the Ferrari drivers had won all of the last four races, which was certainly possible, both would still be championship outsides.

The fight at Ferrari is all about supremacy within the team. Vettel and Leclerc both know their title hopes are done for 2019, but the team’s rate of progress bodes well for next season, and now is about asserting themselves over the other.

Vettel’s decision to disobey the team’s instruction is not hard to understand in the heat of the moment. But given how strongly Ferrari condemned Leclerc’s mild complaints on the radio in Singapore, how will they respond to Vettel’s outright act of defiance?

Vettel played a high-stakes game on Sunday. When his car finally let him down he directed his frustration at his power unit. “Bring back the fucking V12s” he muttered before jumping clear of the cockpit.

Does he associate the V6 hybrid turbos with every season which has passed since his last championship triumph? Probably. Does he miss the raucous noise of normally aspirated F1 engines? Sure.

But Vettel had plenty of other frustrations as well yesterday. Not least the knowledge he’d repeatedly defied his team in a bid to win a race he was doomed not to finish.