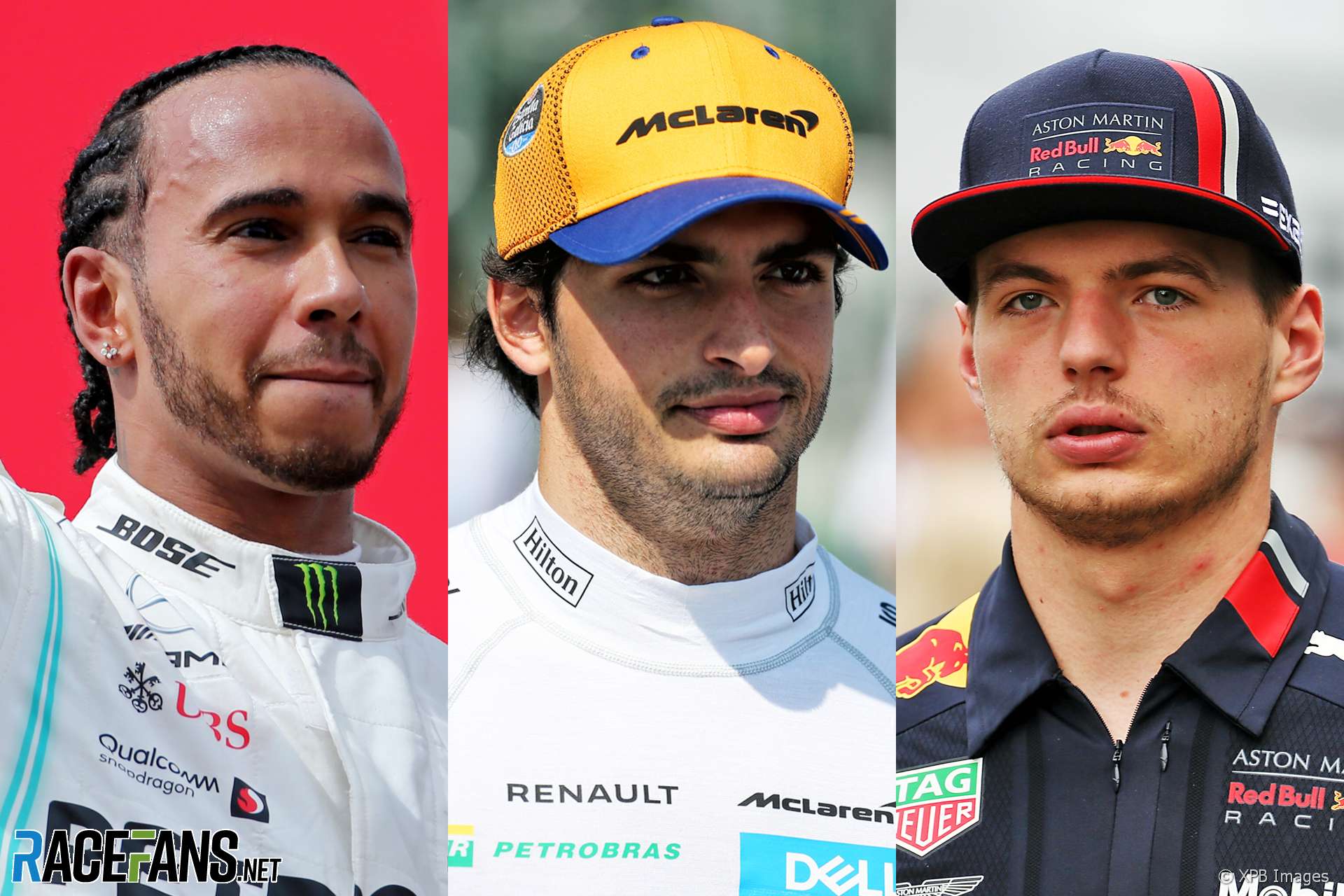 You already know who’s in our top three drivers of the year so far, but what order are they in? Read on to find out.

Surely it’s preposterous to rank a driver who’s been out-qualified by his rookie team mate as high as third on the list? Not necessarily: Sainz didn’t set a representative time in Austria because of an engine change and in Azerbaijan yellow flags ruined his final run on an improving track. Had those flipped in his favour, the scoreline would be a tie.

More importantly, Sainz has consistently got the job done on Sundays since coming through a largely unlucky opening three races. His engine failed in Australia and he was hit by Daniil Kvyat on the first lap in China. Only in Bahrain, where he paid a high price for wheel-banging with Max Verstappen, could Sainz be held responsible for failing to score.

Since then he used the steadily improving McLaren to great effect, drawing away from the midfield fight. He’s done so despite committing parts of his race weekend practice to evaluating more unorthodox set-ups in an attempt to push forward the development of the MCL34.

The upshot is Sainz has been the ‘Formula 1.5’ class winner more times than anyone else. He led the midfield home in Monaco, France, Britain and Hungary. His last two outings produced fifth-place finishes, the former despite spinning off early in the rain in Germany. But for all this, perhaps his best result came at the Red Bull Ring, where he rose from a penalty-enforced 19th on the grid to take a superb eighth.

It cannot have escaped Red Bull’s notice that he was the next car behind their man Pierre Gasly at the flag. Heading into the summer break, Sainz was just five points behind the now ex-Red Bull driver. Red Bull must surely be wondering how close they would be to Mercedes if they’d promoted Sainz when they had the chance.

The only F1 driver to win six world championships – Michael Schumacher – may not have faced much opposition from his team mate, but the same can’t be said of Lewis Hamilton. Though he is well on his way to taking his sixth title, Hamilton has been kept honest by Valtteri Bottas, whose championship bid only stumbled in the last two races.

Hamilton began the season trailing Bottas in the points having surprisingly finished 20 seconds behind his team mate in Melbourne. He swiftly hit back: Though his Bahrain win owed something to fortune, in China he simply beat Bottas off the line and took the win. Although he couldn’t repeat the trick in Azerbaijan, since the championship returned to Europe, Hamilton has asserted himself.

By the time the championship left Monaco he’d led every lap in three of the preceding four races. In Canada he hounded Sebastian Vettel until the Ferrari driver cracked, and in France he led all the way again. That was his fourth win in a row.

Following Mercedes’ off-colour weekend in Austria, Hamilton was in irrepressible form at home, swarming all over Bottas in the early laps and on course to beat his team mate even without the help of the Safety Car.

Germany was his poorest showing of the year so far, and even then it was a somewhat unfortunate tyre call which triggered the errors which left him a lowly ninth. He swiftly banished that weekend in Hungary, where from third on the grid he dodged his way past Bottas at the start, then hunted down Verstappen for a superb win. Hopefully the pair will cross swords a few more times before the season is over, but Hamilton’s eight wins from the opening 12 rounds makes it hard to see anyone keeping him from the championship silverware.

We can’t discount the possibility Verstappen’s star has shone brightly this year because Pierre Gasly has had such a poor campaign. But it’s hard to pinpoint many opportunities for Verstappen to have increased his points haul above a tally which stands at almost three times that of his now ex-team mate.

Despite a car which has been, on average, slower than the Ferrari over the season so far, Verstappen is comfortably ahead of the two red cars in the points standings and just seven behind Bottas. Had Vettel not rammed him at Silverstone, Verstappen’s Red Bull-Honda could very realistically be second in the championship.

Even in the early races, before the Red Bull-Honda package had truly gelled, Verstappen was turning in great results when he could and bagging solid points when he couldn’t. He began the season on the podium and returned to it in Spain. Only in Monaco can he reasonably be said to have come away with less than what was on offer, picking up a penalty for his wheel-banging incident with Bottas.

As his desperate lunge at Hamilton in Monaco demonstrated, there is no one like Verstappen for putting everything on the line when he has the faintest sniff of a victory. It’s a trait which has won him legions of fans and, more importantly, two top-drawer victories so far this year, in the rain in Germany and wrenched from Charles Leclerc’s grasp in Austria. Could he have added a third in Hungary? Given the hand he was dealt, no.

Everything we’ve seen from Verstappen so far this year indicates the raw talent which was obvious before he came into F1 has matured into a formidable competitor who is ready to challenge for the championship.