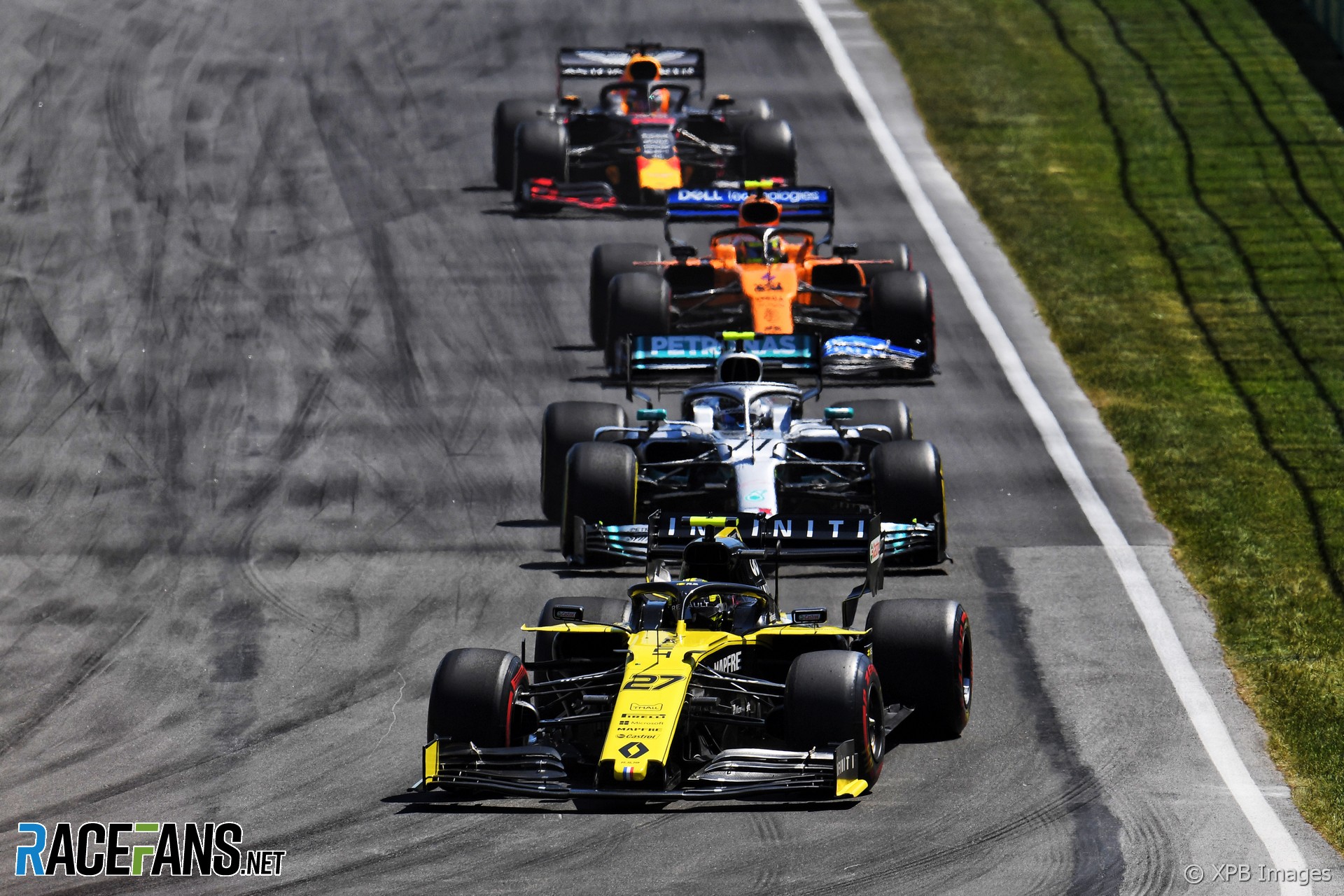 Formula 1’s post-2021 regulatory process has been bubbling under since early 2017, when Liberty Media formally acquired F1’s commercial rights, and appointed Ross Brawn, the former Ferrari technical director and team principal of both his eponymous title-winning teams and Mercedes, to oversee its sporting interests.

Although there doubts persisted about whether the current, highly convoluted 2013-20 governance process applies to regulations framed during this period or only to those which apply during this tenure – and hence whether the Strategy Group and, crucially, Ferrari’s veto hold sway over post-2021 regulations – the FIA and Liberty took the initiative by insisting the FIA’s International Sporting Code applies to the process.

Clearly the changes, arguably the most sweeping in the history of the sport given that they introduce Financial Regulations (aka budget caps) and a revamped governance process, will have ‘a substantial impact’, and thus need to be ratified by 30 June in order to take effect on 1 January 2021. However, ISC provisions allow the code to be overridden by unanimous agreement.

Although the major regulatory cornerstones are in place, some tidying-up remains after the entire process (understandably) lost some momentum due to the tragic death in March of FIA race director and head of F1 Charlie Whiting, who had played a major role in shaping the regulations.

In late April a number of teams lobbied the FIA to delay the process to either October or even January next year. At the time their arguments were driven not by practical reasons, but fears that better-funded teams would get the jump due to having resources to develop both current cars and post-2020 concepts. Not surprisingly, their advances were rejected.

Now, however, there are practical considerations. Bluntly put, the FIA believes the sport would be served by delaying presentation of the regulations to the FIA World Motor Sport Council for ratification until October in order to tie up all loose ends and clarify any (mis) interpretations.

FIA president Jean Todt, in Montreal by prior arrangement for a mobility conference and to dedicate the control tower to Whiting’s memory, requested a delay by unanimous agreement during a team boss meeting on Saturday morning. While all players agree with the logic, a group of independent teams is concerned that the Financial Regulations in particular, which are in their final form, could be diluted during any delay.

“They’re unlikely to get any better [for us],” a team boss explained. “But the chances are the major teams will push for higher caps or more exclusions. That’s why we need to stand our ground on this,” adding that McLaren, Renault, Sauber and Williams had all signed a conditional letter, with Haas possibly to follow suit.

The FIA has convened a meeting for Thursday in Paris at which the governing body hopes to persuade all teams to sign up to the delay, but according to a number of team bosses there is a lack of consensus over various aspects, with one describing the technical regulations as “still green”.

Unless all agree to a delay, in terms of ISC provisions the dossier needs ratification by the WMSC during its meeting scheduled for Friday – the final opportunity before the cut-off unless F1 resorts to the untidy e-vote procedure – or the FIA could leave itself open to legal action. Equally, delaying the regulations by a year would make a mockery of F1 and its administrators/commercial owners, and possibly attract further legal action.

The issue is that the FIA needs to submit the dossier to WMSC members by close of business as this is written on Monday to enable them to peruse reams of papers running into hundreds of pages. How else could the WMSC ratify the dossier without sufficient knowledge of the contents?

According to a letter sent to all teams by Nicholas Tombazis, the FIA’s head of single seater racing and the man who has recently overseen the process, and seen by RaceFans, the FIA is covering itself for both eventualities: It is going ahead with the preparatory stage, but would formally withdraw the dossier should unanimous agreement for a delay to the October WMSC meeting be reached.

Of the five components, the first three are said to be sufficiently complete to require only minor tweaks prior to implementation, with the sporting regulations being, in the words of a Liberty source, “90 per cent there, possibly requiring only clarifications”.

Thus, the only real sticking point is the technical regulations – and the primary reason for the delay request.

The current process commences with (non-executive) Technical/Sporting Regulation Meetings, which forwards recommendations to the Strategy Group, comprising six teams, FIA and Liberty, with six votes per group and requiring simple majorities for motions to be carried and forwarded to the F1 Commission.

Once approved by the F1 Commission (24 votes, comprising all teams, FIA, Liberty, plus engine, promoter, tyre, commercial and technical representatives) by 70 per cent majority/unanimous vote depending upon timing, changes are escalated to the WMSC for ratification and adoption. The WMSC is empowered to accept/reject motions but not amend them.

According to a source with knowledge of the revisions, they simplify the process by reducing the number of representatives while ensuring full representation by teams. The process maintains an element of stability while maintain the FIA’s responsibility for safety.

The FIA, Liberty and all teams will be the sole members of the revised F1 Commission, with each team having a vote and FIA and Liberty ten votes each. On engine-related matters only, such suppliers have a vote each. The structure is scalable, in case the number of teams or engine suppliers rises or falls. Checks and balances are offered via options for unanimous, ‘simple’ and ‘super’ majority votes depending on the timing of regulation changes.

For regulations changes affecting the following season a cut-off date of the end of April applies, or the end of September for budget cap matters. A simple majority – 25 of 30 votes based on the current grid – is needed for approval. A ‘super majority’ (28 votes) kicks in thereafter. Unanimous agreement is required for in-season changes, and voting may be conducted via secret ballots if requested.

Stability periods are provided for specific regulations such as power units, budget caps and the ‘DNA’ of Formula 1, whatever that implies.

Four advisory committees are to be established – technical, sporting, financial and power unit – to review and advise on any amendments, but these committees have consultative and advisory roles only.

Finally, Ferrari retains its power of veto over changes to F1’s rules, which is referred to as its ‘protection right’. This covers changes to regulations governing the power unit, finances and F1’s ‘DNA’. It is subject to some conditions, not least that the changes need to have a substantial adverse impact on Ferrari’s legitimate [F1] interests.

Much discussed for over a decade but new for 2021, the financial regulations limit certain spends by teams over a full year reporting period, and will be applied by a cost cap panel. They form part of the conditions of entry, and all team personnel must be made aware of regulations and of the FIA whistleblowing policy.

As RaceFans revealed last week, the overall cap is $175m – the regulations include presentation conversion rates into Euro/GBP and Swiss Francs – with Clause 3 listing certain exclusions:

In addition, under the regulations a Cost Cap Adjudication Panel – consisting of a group of independent judges – could levy sanctions on individual team personnel responsible for any breaches.

A ‘soft’ implementation period, specifically the full 2020 year, is planned as a ‘dry run’, while the regulations make provision for new entrants, who for the full year prior to entering the sport will be required to salient aspects of the regulations.

In addition, a number of sporting restrictions will apply, including limits on engine and energy recovery system dynamometer usage, with glidepaths for both to be implemented over a three-year period. For example, engine dynamometer operating hours will be halved between 2021 and 2023.

Stipulations such as obligation to supply a specified number of teams and maximum price for a single season two-car lease remain in place, the latter on a matrix basis dependent upon exact specification.

Verdict: Power unit suppliers seem in favour of such changes, but what happens if incomers lag, as happened with Honda?

The strategy is to revise the sporting regulations in two phases: savings and spectacle. The changes in the dossier are aimed mainly at cost savings and efficiencies, while future changes will target improvements to ‘the show’.

‘Three-day’ race weekends beginning on Fridays instead of Thursdays. Savings are expected to be made by crews arriving a day later, although the jury remains out as the potential savings. Some suspect this is a tactic to reduce the number of ‘away days’ to enable Liberty to expand future calendars.

Parc Ferme regulations will operate from Fridays to cut set-up, and cars must race as scrutineered. Experimental parts may be fitted after scrutineering, but cars must qualify or race in their scrutineered specification.

Gearbox usage will be pooled for the season, rather than being used for a number of events. The intention is to reduce penalties without increasing costs.

Each team will be obliged to use at least two race weekend Fridays per year to give runs to rookie drivers. These are defined as drivers with no more than two grand prix starts.

Pre-season testing will be reduced from two four-day tests to a pair of three-day tests. Again this is aimed at cost savings, but the jury remains out…

Verdict: Arguably the most contentious changes, with split opinions on their effectiveness.

These regulations are said to be the ‘greenest’ (i.e., the least complete). Four main goals are targeted.

To this end a number of studies have been undertaken by Liberty, working in conjunction with the FIA and teams, to frame regulations that deliver aesthetic but less aero-sensitive cars by reducing ‘following car’ sensitivity. Currently the effects of turbulence can be felt up to eight lengths behind a car, but the new aerodynamic regulations should reduce this by 80%.

Another change is to the classification of parts. Out goes ‘listed parts’ terminology, and in comes:

In addition, the number of in-season aerodynamic upgrades will be restricted, while certain components will be homologated for the full season (or more).

Verdict: The devil lurks in the detail, which is currently lacking…

Apart from requisite fine-tuning of certain provisions of various regulations, F1’s five-year future now seems largely mapped out. The danger now is that team interference – particularly from the majors – dilutes the entire process. Friday will indicate which is the way forward.