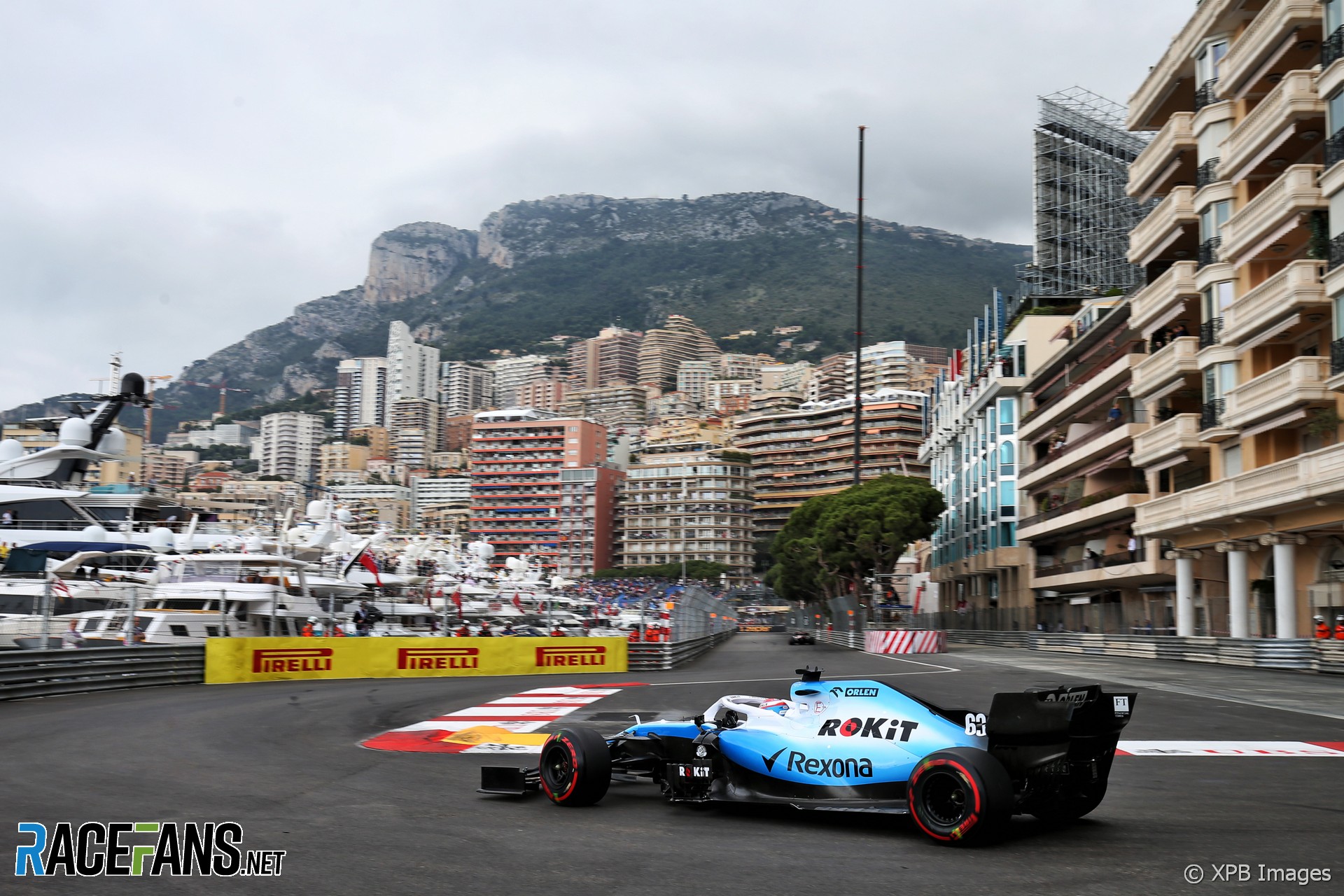 The weather during the Monaco Grand Prix weekend was variable, ranging from sunshine through overcast humidity to the occasional spittle. But is a perfect storm brewing in the background?

As was the case when Charlie Whiting passed away on the eve of the new season, the loss of a figure like Lauda reminds everyone of their own mortality. Due respects were paid in fitting style: not only did the drivers don red ‘Niki’ caps but Mercedes cars sported the closest thing to them with red Halos. And his helmet design was carried to first and second places by Lewis Hamilton and Sebastian Vettel.

But now the sport moves on without Lauda. His incisive perspectives and oft-pithy comments will be sorely missed by all in the paddock. Another consequence is that Lauda was a 10 percent shareholder in the Mercedes team (parent Daimler have a ‘pull’ option on the stock after 2020) and it remains to be seen what happens to his voting rights in the interim.

This uncertainty may be just one symptom of stormy weather ahead. The decision by the FIA to scrap the much-vaunted tender for a standard F1 gearbox is another.

Last year a summit of all team bosses was held in Monaco on the Friday to discuss F1’s post-2020 transition. This year there was nary a team boss to be seen on the traditional ‘off-day’. It not as though the post-2021 technical and sporting regulations, revised governance process and commercial details are fully sorted, as delegates to the previous day’s FIA press conference made clear, yet – rather surprisingly – the key F1 figures chose not to meet on Friday.

Whilst the FIA’s U-turn on the gearbox tender directly affects only a single, albeit major, component group, it highlights two crucial factors: obvious team influence in the post-2020 regulatory process, and cracks in Liberty’s standardisation strategy. The residual impact of the decision extends beyond a cluster of gears; the word in the paddock is a number of similar tenders will also shortly be withdrawn.

The wrangling over the sport’s future has not descended into the bitter acrimony familiar from previous years. Many credit the relationship between Liberty CEO Chase Carey, Managing Director Ross Brawn and FIA President Jean Todt for the lack of major polemics in recent times.

What, though, if this situation changes for whatever reason(s)? Carey turns 66 on 22nd November and is thus already at ‘normal’ retirement age, Brawn hits 65 the following day and 73-year-old Todt is in his final term, which expires at the end of 2021.

Not unexpectedly, various sources (re)confirmed in Monaco Ferrari will continue to receive its annual ‘long-standing team’ bonus, albeit reduced from the stratospheric sums it currently receives. Liberty’s justification is that a spend cap neuters any performance advantage Ferrari may derive via the bonus as the team would not be permitted to spend in excess of the cap.

All well and good, but that logic presupposes that a cap of $200 million maximum will be imposed, and that restrictions on driver salaries etc… are included. If not, we could be heading for the first $50m-per-year driver, who could clearly not be afforded by other teams.

Then there is the question of Ferrari’s historic veto over future regulation changes. After Ferrari team boss Mattia Binotto said in response to a question from RaceFans in Spain that the team was “hopeful [that] we can keep the same [veto] rights” and implied it would protect all teams against willy-nilly changes, this writer posed the question of that retention to a number of team bosses in Monaco, both within and outside the FIA press conference.

Apart from comments such as ‘it’s silly’, ‘it’s outdated’ and a mocking ‘how kind of Ferrari to offer to represent the teams’, the overwhelming sentiment in the paddock among Binotto’s rival team bosses was that Ferrari’s veto should be scrapped. But all were resigned to Liberty caving into Ferrari’s demands and permitting the Scuderia to retain its veto.

Above all, though, the retention of Ferrari’s veto is significant as it points to a further dilution of Liberty’s stated post-2020 objectives.

Indeed, permitting Ferrari to retain such powers raises pertinent questions about the level of the much-vaunted budget, and whether it will even be introduced. What if Ferrari vetoes the concept of a budget cap in its entirety, as it did in 2009, when the FIA under Max Mosley planned to introduce a $40m cap?

True, the threat was never carried through, but only because the issue was resolved (the FIA cap was eventually dropped), but the fact is that Ferrari commenced legal proceedings against the FIA in the Paris Court of the Grande Instance to block the proposed 2010 regulation changes.

More recently Ferrari threatened to block proposed changes to the engine regulations – proving the veto is effectively ‘a loaded gun’, as Todt once called it. Imagine the state of post-2021 should Ferrari decide to veto some or even all the changes – F1 under those circumstances would be little different from what we presently suffer despite constant reassurances from Liberty that post-2020 F1 will be much changed.

All these factors fall squarely under Liberty’s direct control, yet each has the potential to seriously disrupt F1’s grand post-2020 plans unless skilfully managed. There are, though, a number of further threats that fall outside Liberty’s jurisdiction, all of which are capable of unsettling even the best-laid plans, or possibly disrupting them totally.

Prime amongst these are potential decisions at motor manufacturer boardroom level to withdraw from F1 – as per F1’s mass 2008/9 walkout. True, this is a perennial threat, but Clause 2.1 of their respective bilateral agreements with Formula One World Championship Limited (now controlled by Liberty) locks the teams into participation only until the end of 2020. That is but 19 months away.

There is increasing talk that Mercedes will exit after that date, potentially remaining as an engine supplier only given that all heavy development expenditure has been incurred over the past ten years, and the engine regulations will be relatively stable until at least 2025.

Despite denials from Toto Wolff that he is considering an offer to join Liberty as CEO – with Carey staying on as chairman – such talk persisted in Monaco. One source was adamant talks are continuing, and brushed off Wolff’s denials saying: “Well, Toto needs tension in his negotiations with Liberty.” Significantly, this came from someone other than our original source…

Naturally, Mercedes has shot down such suggestions. This is to be expected, besides which the final decision may not yet have been taken given the changes taking place at the top. This Friday Dieter Zetsche, Chairman of the Daimler and CEO of Mercedes Passenger Car Division, officially steps down.

His place will be taken by Ola Källenius, the first non-German and non-engineer to head the car company. The Swede was instrumental in devising the company’s e-mobility strategy, recently telling Autoweek, “There’s no two ways about it, the world is going toward zero-emission in the long term. For us, in the next five to 10 years, battery electric vehicles play an absolutely crucial role to go there”, before confirming that he is seeking over £5 billion in cost savings from Mercedes by 2021…

Källenius was the driving force behind 10 purely electric Mercedes-Benz models, the first of which was launched earlier this month. Will he – excuse the pun – pull the plug on F1 at the end of 2020? Particularly given the team’s sparkling run of successes, from which the only way is down.

Not necessarily. But the point is he may well decide to do so, and that is a decision that lies outside of Liberty’s direct control.

Consider the impact of such a move, particularly a worst-case scenario where the F1 engine programme is canned simultaneously – and Mercedes sinks its full motorsport resource into Formula E; what a fillip that would give the nascent series.

Meanwhile, although Ferrari CEO Louis Camilleri put in an appearance in Monaco, the heads of the other major European motor companies active in F1 – Renault and Alfa Romeo – were conspicuous by their absence. The reason became clear on Monday: the financial media reported that Renault, already in an alliance with Nissan/Renault, and Fiat Chrysler Automobiles were investigating a merger.

The likely outcome is that the Agnelli family becomes the largest shareholders in what would be the world’s largest motor group, holding 29 per cent of stock. The primary reason for the merger: Renault’s lead in e-tech and zero-emission vehicles…

Renault was one of the first manufacturer entries in Formula E, but once it (re)acquired the Witney-based F1 operation it had sold to Genii after its 2009 exit from F1 as team owner, it transferred the electric racing team to alliance partner Nissan. After an FCA merger the group would have interests in two F1 teams: Renault and Alfa Romeo, neither of whom are currently doing the business, nor pulling massive bonuses.

Following the arrest of ex-Renault/Nissan CEO Carlos Ghosn the Franco-Nippon alliance has been under strain, and there is talk that it may be dissolved rather than fully merged, and thus Nissan could well go its own way, both corporate and motorsport.

Whilst it is still early days yet, it is not inconceivable that the envisaged Renault-FCA group decides to pull the plug on one (or both) of its F1 teams, particularly when pressured to commit commercially for 2021-onwards, and dispatches one (or both) its European brands to FE.

Why so? Imagine the internal conflict: Already the Agnelli family controls Ferrari (albeit via a separate entity) and Alfa, with the merger adding Renault to the family’s F1 interests – does it make sense to keep all three brands in F1? Having won the war to retain Ferrari’s LST bonus and regulatory veto, the Agnellis may just decide to pull Renault and Alfa from F1. Why not?

Finally there is the threat from Formula E itself: Where once the electric series was very much the poor relative amongst FIA championships, and was sanctioned only as a series, talk is now of fully-fledged world championship status, placing it on a par with F1, WEC and WRC, and above (Liberty-owned) F3/2 in the pantheon of F1 championships.

Who knows, Renault and/or Alfa Romeo (which recently revealed its Tonale concept car that offers an electric-only option) may well grace FE grids, in addition to Nissan should the Franco-Nippon merger disintegrate. How would Liberty plug the resultant F1 grid vacancies given that no new teams are even on the horizon?

There are no firm indications that any of the foregoing will eventually happen, but each of the scenarios is perfectly feasible. The fact that there are not necessarily direct links between some or all does not, though, prevent a domino effect – for example: a Mercedes exit could lead to Alfa Romeo (and/or Honda) following suit; equally, Ferrari’s use of its veto over budget caps could spark the exit (or demise) of a number of teams.

The worst global catastrophes have occurred when a series of seemingly unrelated events have conspired simultaneously – and unless F1 manages every single aspect of its post-2020 transition, and meticulously plans for factors outside its control, it could well find itself hit by a perfect storm.

The upside is, though, that the sport could then reinvent itself, shrugging off the shabby remnants of its past, and rise shining and new from the devastation caused by the storm. Some wonder whether that may be precisely what it needs.