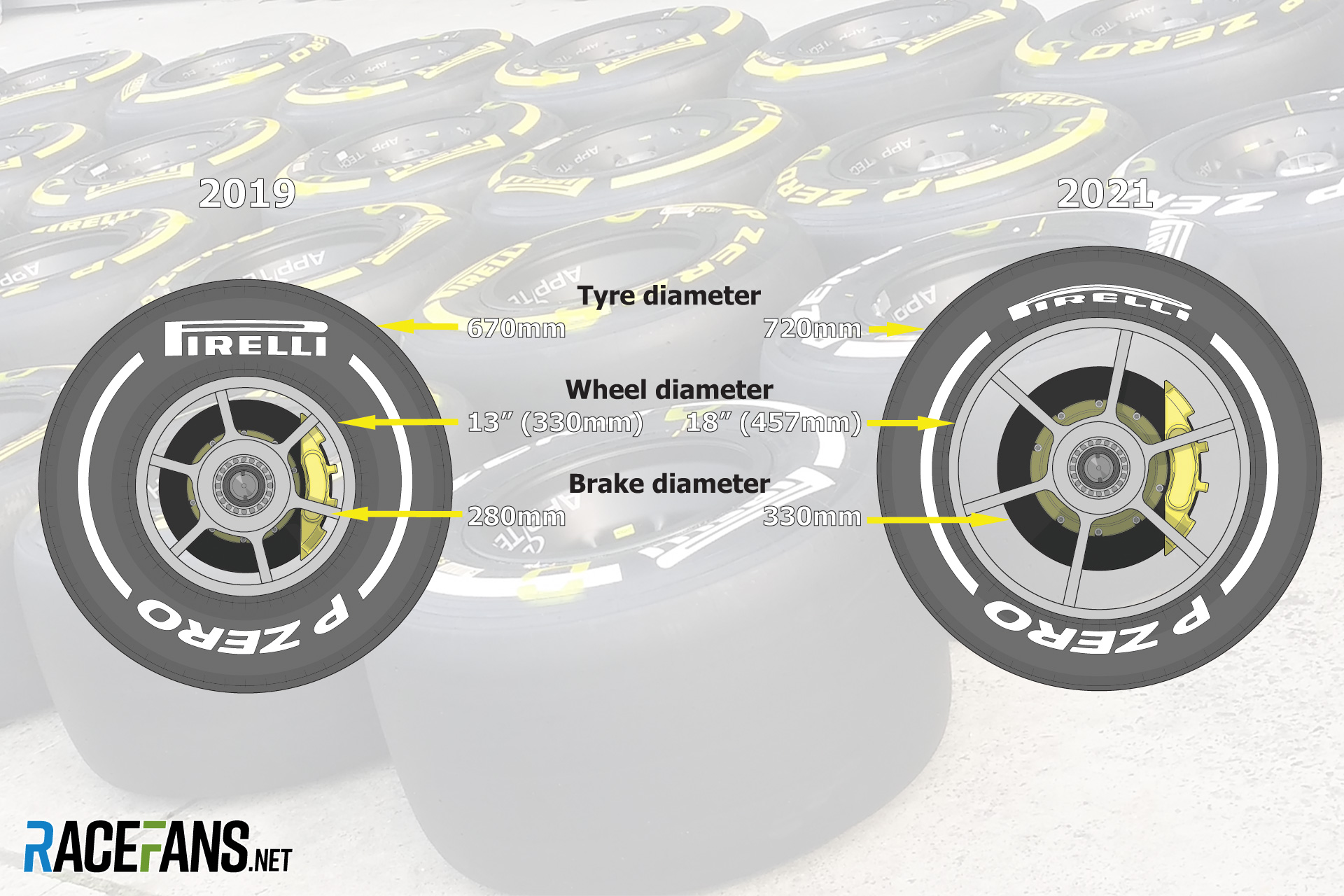 As part of the 2021 revamp of F1, one of the key cost savings being considered is the switch to a carefully selected number of spec parts. The list is quite short and for the large part will go unnoticed by the fans and teams. The tender for the gearbox cartridge has already been published by the FIA and another three tenders have recently been released for the brake system, brake material and wheels

In terms of specification the current calipers are quite tightly constrained, being fixed to six pistons, aluminium lithium material and just two fasteners bolting the caliper to the suspension upright.

Even with eight teams running the same supplier’s calipers, each individual team will run its own variation to suit their particular hose connections and cooling requirements. So the future supply of a spec caliper will reduce the options for teams, cutting costs at the same time and with little performance loss.

Some revised technical details are apparent in the tender. Firstly the material choice will switch from aluminium lithium to 2618 or an equivalent aluminium alloy, this will be a cost reducing change. However, with this change will be a loss in the stiffness of the component, which is a critical factor in the effectiveness of the caliper.

Fortunately the other change in 2021 is to larger diameter wheels, so despite the caliper wrapping around a bigger 320/330mm disc, there will still be more space to build a larger and thus stiffer caliper by having a strong bridge section, which is the part that connects the left and right side of the caliper.

Allied to the brake system tender is the corresponding change in brake material supply, which consists of the brake disc and the brake pads, both being made from the same material.

Historically there are three suppliers of carbon brake material to F1: Brembo, Carbone Industrie and Hitco. The special brake material is expensive and time-consuming to manufacturer, hence the costs. Then the machining of the bulk material into the finished discs, with their 1,500 cooling holes, and the pads adds further expense. Currently the discs are 278mm in diameter and restricted in thickness to 32mm. While there can only be two brake pads per wheel, which can also be drilled for cooling between the main body of the pad and the area where the caliper piston presses on the pad.

In the tender we learn that with the new larger wheel sizes will accommodate larger brakes so the disc will grow to 320mm or 330mm in diameter. The extreme amount of cooling holes in the current discs will be reduced, as they have grown from 100 holes in 2005 to some 1,500 today, so to cut costs the supplier can elect how many they feel is necessary within budget.

This could create a problem at circuits like Singapore which place a high demand on the brakes, so the supplier will have to offer two brake disc specifications; the cheaper, normal-duty disc with fewer holes, and for at least four circuits on the calendar a heavy-duty disc which is more expensive but provides greater cooling.

The pads must also a multi-directional design, so that just one part can be used on any of the front brake calipers. Additionally, the pad cannot have a drilled rear face.

For the rear brakes the tender is less prescriptive, as they are less stressed than the front brakes due to the braking effect of ERS. Already many teams run thinner rear brake discs and even four-piston rear calipers, as the ERS braking effect is so strong. The supplier will have to propose what diameter and thickness disc is suitable, with the benefit that the FIA are not asking for the braking set-up at the rear to be able to run with an ERS failure.

We already know that the wheels will be going to a larger diameter rim size, from the current 13 inches to 18, to make the cars look more like most other current road and race cars. F1’s distinctive ‘balloon’ tyres will disappear, but this is an overdue change.

Along with the spec Pirelli tyres, the wheels themselves will also be a spec part from 2021. The tender is asking for a supply of spec front and rear wheels for the entire grid. Current wheels are fixed in size, but there is an impact with this change, as different spoke design, heat transfer treatments and total weight do vary by team.

Current rules call for AZ70 or AZ80 Magnesium for the wheels, where as the spec wheel material choice is free. This might open up an opportunity for a cheaper wheel material and construction technique. It’s unlikely carbon fibre would be chosen as the spec material, as the cost of manufacture is high and the added cost of post-race inspection for damage would be far higher, especially considering the shorter tyre walls that could lead to rim damage over kerbs.

Any spoke design chosen for the wheel is likely to be inconsequential, as the wheels will be closed off with carbon fibre fairings as part of the aero changes for 2021. This spec fairing might be supplied by the successful wheel supplier, but not necessarily. Regardless the wheel design must accommodate the fairing being fixed to the wheel. So, the 2021 wheel fairings will spin with the wheel, not remain static as when these parts were previously seen in 2008-09.

The wheel supply must also incorporate the inflation valve and provision for one wheel nut. This nut will not be captive, as has been the trend in recent seasons. At pit stops this means the wheel nut will be held in the wheel gun socket and refitted to the new wheel. Both the wheel nut and wheel gun will be part of other spec part tenders.

Finally, the wheel must also provide for a new tyre temperature and pressure sensor (TTPS). This sensor will be detailed in a separate tender, and will be mandatory, even though already teams run homologated TTPS.

44 comments on “Analysis: The impact of F1’s standard brake system and wheels in 2021”