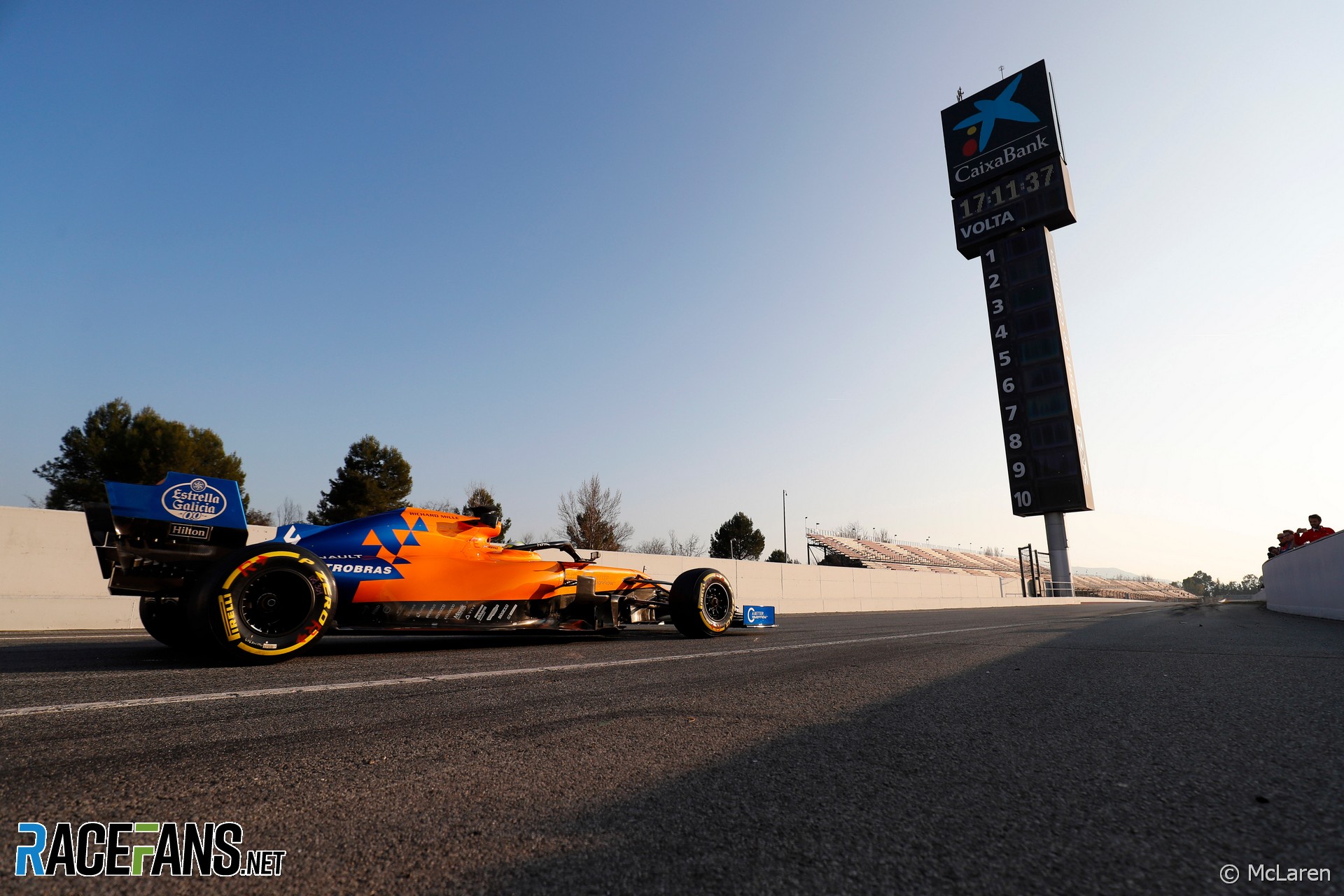 How can Liberty Media extend the F1 calendar while also introducing a budget cap which would limit how much teams can spend? And how can they hope to attract new teams to F1 while dismantling the ‘B-team’ model which allowed Haas to thrive?

These are the contradictions the sport’s owners much resolve in the next four months, explains @DieterRencken.

What’s the difference between Brexit and F1’s post-2020 regulatory process? Brexit could be delayed…

Time is running out for Liberty Media to win support from F1’s team for its 2021 overhaul of the sport. At least six teams – Renault, Haas, Racing Point, Sauber, Toro Rosso and Williams (plus possibly McLaren) – are unlikely to agree to any extension of current agreements that outline F1’s regulatory and commercial framework beyond the end of 2020.

Their reasons are not hard to fathom: the current bilateral agreements, entered into with all teams individually and euphemistically referred to as a ‘Concorde Agreement’, favour Ferrari, Red Bull Racing, Mercedes, and – to lesser degrees – McLaren and Williams. The rest are massively disadvantaged by the inequitable commercial and regulatory clauses, as their financial situations show.

Indeed, if a car from outside the favoured three wins in Australia, it will have been 101 races since a non-Ferrari/Mercedes/Red Bull entry won a grand prix. This speaks volumes for the havoc wreaked upon F1 by its former commercial rights holder CVC Capital Partners since 2013, when these inequitable agreements were imposed upon the independents as a sop to an ultimately aborted listing.

To many – including this writer – the brightest moment of CVC’s custodianship of the F1 was undoubtedly the moment Formula One Management and its ownership of F1’s commercial rights were signed over to Liberty Media. Given current ructions surrounding the sport, that surely says everything about CVC’s tenure.

In terms of common law, any extension of contracts requires unanimous agreement, and thus all teams would need to concur before the expiration date of the agreements could be pushed out beyond the end of December 2020. However, for the reasons outlined above, a least half the grid is unlikely to agree, particularly as the future survival of the vast majority hinges upon an equitable revenue structure.

[smr0901]The first milestone F1 needs to hit is the 30 June 2019 cut-off for regulation sign-off, as demanded by the FIA’s International Sporting Codes, which applies in the absence of any superseding agreement – as outlined here.

Could a superior agreement be struck before that time? Possibly, but unlikely given that such a deal would require the agreement of the FIA, Liberty and all 10 teams, each of which have entrenched interests. The last such umbrella agreement, the 2010-12 Concorde, took almost three years to ink.

Equally, bear in mind that we are only not concerned with F1’s future technical regulations. These are likely to be based upon the current rulebook, with amendments for 18-inch wheels and tyres, possibly some brake changes (due to larger wheels), provisions for upgraded safety items, plus provisions for increased power. The latter was indicated in the FIA’s call last week for a gearbox cassette supply contract, the tender for which outlines:

“An average input speed increase of around 14% from [2019], and a power increase for 2021 relative to today, not just because of natural development, but also because of a 30kW increase in the MGU-K output.”

Thus we can assume power outputs of over 1,000bhp all-in, delivered at 17,000rpm-plus. This in turn points to fairly restrictive aerodynamic regulations to both control speeds and increase overtaking opportunities, particularly as Pirelli’s 18-inch rubber will likely result in increased cornering forces. FOM has indicated that some styling elements will be incorporated, but these are unlikely to demand major regulatory changes.

Thus some tweaking of the current rule book will be required; overall, though, the anticipated 2021-onwards technical regulations are likely to be more evolutionary rather than downright revolutionary.

To further complicate matters, the 2021 regulations (thus far) represent the first regulatory change in which the teams have had no overall say since the early eighties. True, they have given input into the current process and have been consulted along the way but, in terms of the ISC, the changes need not be put to the team vote as is currently the case, and has been since the 1981 Concorde Agreement was signed. Don’t underestimate the significance of that change.

Delay the cap beyond 2021, and Liberty may as well admit defeat – an all-out spending war between Ferrari and Mercedes will be the result.

This is where it gets extremely hazy: What is included in the cap, what is excluded and, of course, the overall value of the cap. Already the concept has been watered down: the targeted ‘hard cap’ date was 2021 but the teams with the most to lose – guess who – successfully lobbied every which way until insufficient time remained for a hard $150m cap from 2021 onwards.

Thus the latest proposal centres upon a $185m cap – excluding power units, reckoned to be capped at $15m/annum for a two-car supply, allowing for an effective ceiling of $200m – for 2021, reducing by $25m for each 2022/3 respectively. Yet, to the majors even that is too tight despite three years’ notice before the end game is reached, for they stand to lose up to 400 heads each unless they are able to redeploy them.

Meanwhile Liberty is targeting more races. But the reality is that additional rounds costs more, which a ‘hard cap’ does not cater for. Another complicating factor is that flyaways can cost twice as much as European rounds – even after FOM subsidies – yet Liberty is increasingly targeting more of these far-flung races: Vietnam already has a spot on the 2020 F1 calendar, Miami and others are being courted, while Silverstone, Catalunya and Monza are endangered.

The idea is that more races – particularly flyways – deliver increased revenues for Liberty and, therefore, the teams. Yet what use more money unless it can be used to offset additional costs, which a “hard cap” does not permit?

Any wonder, then, that Liberty is battling to get the concept of a budget cap ‘across the line’ before the sporting regulation cut-off date. True, there are ways and means of forcing the issue, but that risks alienating the sport’s top draws, namely the ‘big three’ who may just decide to go play elsewhere – particularly given the motor industry’s love affair with electrification.

Consider: Mercedes and BMW are jointly investing a billion Euros in ‘new era mobility’ solutions initially aimed at 90 cities, which basically translates to ridesharing, renting, charging, and autonomous driving. Does F1 fit into that lot in any way, shape or form? Hardly. And while it may not need to, against that background F1 needs to make more economic, technological and marketing sense than ever before.

Thus, Liberty should rethink the entire concept of a “hard cap” and link expenditure to race calendars, with realistic values allocated to European and ‘international” rounds, in turn adjusted for double-headers. Thus Euro rounds could be worth, say, $5m and a set of European back-to-backs $4.5m each. Equally, flyaways could be valued at $10m, and a set at $9m each.

Too complicated? Consider the stress calculations and computational fluid dynamics analyses bashed out on an hourly basis by teams, then consider how long it would take to string together the mathematics of a flexi-budget cap based on two dozen races.

As for manning levels: teams in any event take on contractors at peak periods, so linking headcounts to fluctuating annual budget caps is elementary human relations stuff as undertaken by their parent companies on a regular basis as they cater for the ebb and flow of production volumes. The calculus applies equally to Mercedes and Ferrari for road cars, and Red Bull for drinks cans.

Another challenge facing Liberty is the question of new teams. Although 20-car grids are acceptable, the loss of just two outfits (see above) could spell disaster, and not only due to taking the number of cars (16) perilously close to the minimum which race promoters are contracted to receive, but also for the negative impact on the ‘show’. Thus, it would be prudent for Liberty to attract at least one, preferably two, start-ups.

Twelve teams would, after all, be better than ten, and would leave F1 less vulnerable to the departure of one or two teams. However, the structure of modern F1 is such that its costs of entry are prohibitively high for all but multi-billionaires.

Tellingly, four of the last five teams to enter F1 as start-ups plunged into administration within a handful of years, with Haas being the only exception – having entered F1 in 2016, and immediately scored points. Last year Haas placed fifth in the classification and had the fourth-quickest car. How did Haas manage to succeed where four others failed spectacularly?

In short, by adopting a ‘listed parts’ business model; to wit, purchasing all permitted components from a team (Ferrari), and out-sourcing the balance of parts. Thus, Haas’s Banbury base is effectively an assembly / race shop, where the various parts procured from (mainly) Ferrari and Dallara are bolted together.

Yet if early indications are on the money, Liberty plans to outlaw this kind of model by increasing the quota of certain listed parts – those that teams need to hold the intellectual property to – while standardising others that render a Ferrari/Haas approach either impossible or uneconomical.

A perfect example is provided by the gear cassette tender: insistence upon bespoke transmission housings for specification gear sets means Haas will be unable to source complete powertrains from another team, be that Ferrari or not, and be obliged to source its own casing and add-on parts such as suspension components.

Overall this approach makes sense, for it ensures bona fide teams are genuine stand-alone entities, able to compete on merit. However, the flipside is that, by banning the ‘listed parts’ model outright, the sports risks not attracting incoming teams.

A potential solution is to permit fledgling teams to enter into ‘mentor’ arrangements with willing teams – F1 internships, so to speak – for limited periods, say three years. Thereafter they would be required to adhere fully to prevailing sporting and technical regulations. Thus start-ups could have three-year ‘runways’ before flying on their own.

Amongst the objections raised by teams against the ‘listed parts’ model is that supplier teams profit from the arrangement, in turn providing them with larger war chests. However, under the budget cap model, flexi or not, spend is restricted, and income from ‘intern teams’ would be written to profits, not performance.

Thus, everybody wins, and, crucially, nobody loses – while providing employment for folk who would otherwise be laid off. And, as befits this most capitalist of sports, a team stands to make a genuine profit.

All this will, though, take time to convert into regulations, and herein lies the rub: Unlike Brexit, there can be no extensions.

32 comments on “The contradictions complicating Liberty’s plan for 2021”