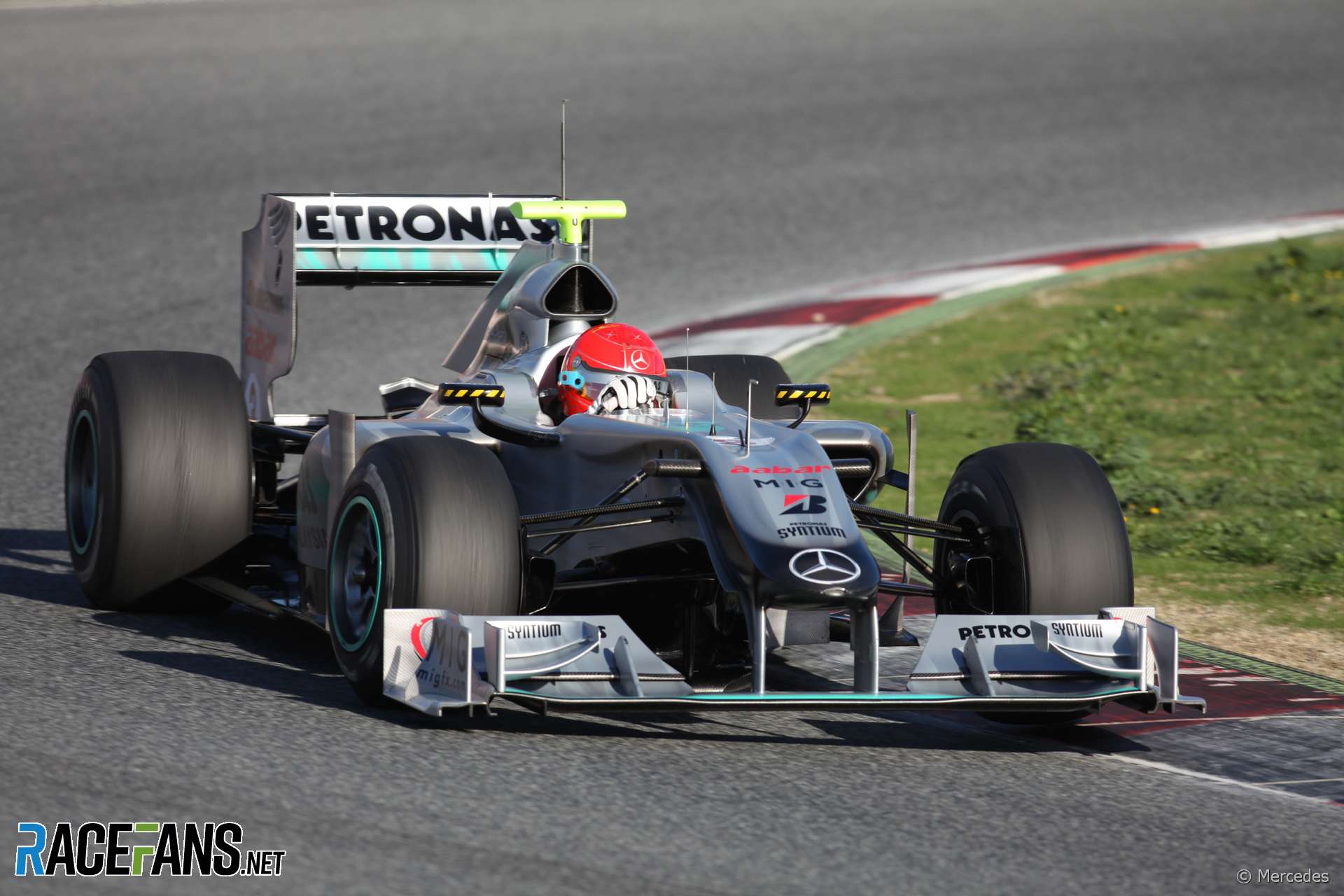 Michael Schumacher played a major role in transforming Mercedes into championship contenders before he left them, according to former team principal Ross Brawn.

The seven-times world championship spent three seasons with them before being replaced by Lewis Hamilton at the end of 2012. Mercedes have swept the championship in every season since 2014 but Schumacher, who turns 50 today, has been unable to share in their success since he was injured in a skiing crash at the end of 2013.

Brawn said Schumacher’s arrival provoked some resistance in the team but he “helped to instil and reinforce the principles of how to do things” which won him support.

“I’ve worked with Michael and knew what he was like and the standards he maintained and I knew the levels he worked to,” said Brawn in an interview for the official F1 website. “Those guys hadn’t.”

Among those who were initially unsure about Schumacher was Jock Clear, who had been Jacques Villeneuve’s race engineer when Schumacher collided with the Williams driver while trying to beat him to the 1997 world championship.

“Jock Clear who was Villeneuve’s engineering when Michael and Villeneuve came together, almost hated Michael with a passion, yet became one of Michael’s closest friends when Michael came to the team and worked with him,” said Brawn.

“Michael’s work ethic, discipline and application just won everyone over. It raised the standard of the team in knowing what they could or should be doing. I think I had an impact but Michael had just as much, even more impact on the team when he came and worked there.

Mercedes team principal Toto Wolff described Schumacher as “one of the founding fathers of the success we have had in the last five years.”

“There is no other driver like him and his vast experience contributed tremendously in the development of our team,” Wolff added. “He played a crucial role when we rejoined F1 and was one of the people who laid the foundation for our future success. We’re extremely grateful for everything he did for us.”

Brawn said Schumacher’s return to the team came about after Jenson Button, who had won the world championship for them, made a surprise move to McLaren. Schumacher had tested for Ferrari with a view to substituting for Felipe Massa when he was badly injured in a crash at the Hungaroring.

“Because of Felipe’s accident Michael tried to get back in the car and that kind of alerted me to the fact he was starting to get withdrawal symptoms. He’d had his bike accident and he’d hurt his neck quite badly – much more than people probably appreciated because he kept it quite quiet. Eventually he had to admit he couldn’t drive the car when they tried to get him in the Ferrari, his neck was just giving him too much grief. But it showed to me he was keen.

“And when, quite frankly, we were caught off-balance by Jenson deciding to leave, I rang him up and said ‘do you fancy a beer’ and he said ‘I know what you want to ask, let’s have one’. He kept his finger on the pulse so it was no shock to him.

“In fact we agreed to try and find a way forward very quickly and Mercedes were very keen to have him in the car of course, Norbert [Haug, Mercedes vice president of motorsport at the time] was very keen to get him in the car. So then it was just a question of working out a deal that everybody could live with. So that came together fairly quickly.”

Schumacher arrived as Mercedes took over the Brawn GP team, which had won the 2009 championships despite the withdrawal of previous manufacturer backer Honda 12 months earlier. However his spell at the team was win-less, which Brawn put down to the shortcomings of the machinery the team produced compared to when the two won a string of championships at Ferrari.

“I think the difference was that we no longer had a dominant car,” Brawn reflected. “In those periods with Ferrari we always had a strong car or the strongest car. The reality was we didn’t have it in 2010.”

“The team had been in survival mode because we simply didn’t know where we were going and we couldn’t commit the budget to putting in a strong development programme for 2010. We were basically keeping a close eye on every expenditure because we thought we may have to survive another year with no major [investment].

“We went in 2010 with a gently warmed-up version of what we had in 2009 rather than making the level of progress. Of course new regulations in ’09, other teams got on top of them more quickly than we did. So in 2010 we were pretty average.”

30 comments on “Schumacher was key to Mercedes’ championship success – Brawn”