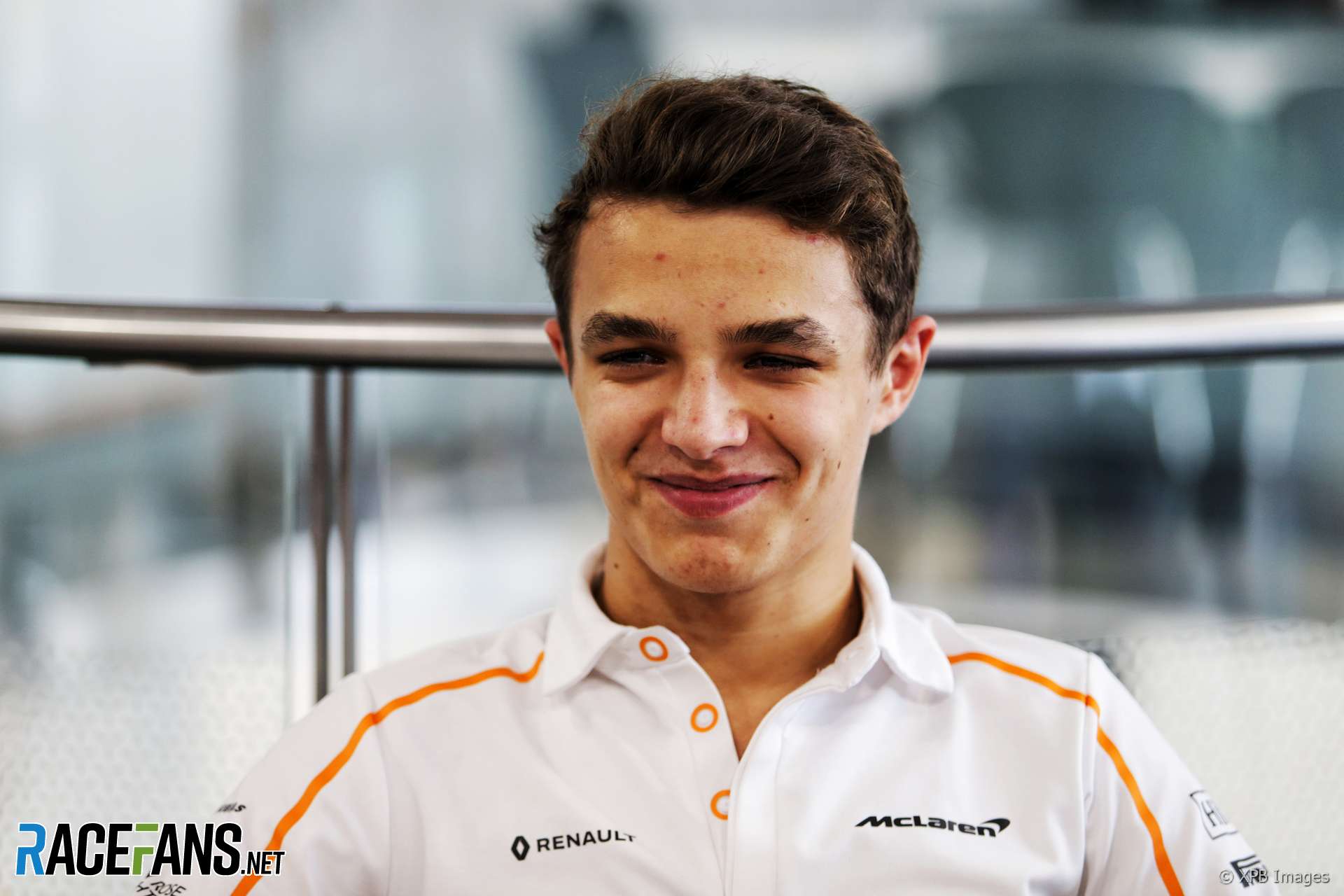 In the round-up: Lando Norris says he doesn’t feel under pressure to deliver immediately when he makes his Formula 1 debut for McLaren next year.

Norris said he will be able to learn from McLaren’s new hire Carlos Sainz Jnr.

I don’t think I need to rush anything, I can take my time. McLaren are working on all areas: on the young drivers, the new drivers, myself, the car for next year, obviously. So I don’t think there’s too much pressure. Obviously there is pressure and I need to do well and not makes mistakes but it’s not like I have to show I’m capable of winning a world championship in race one.

I have time to develop. They’re allowing me to have time to develop and become a better driver, they can help me in doing so. And of course it’s not going to be the ideal situation to be in, you never know what the car’s going to be doing next year, it could be amazing, it could be bad, you never know. But obviously we’re working on the ‘amazing’ aspect of it and trying to make it better. The we’ll see in the pre-season test.

Back to basics today pic.twitter.com/yFFJYVZ5HM

'It was a successful season' (Verstappen)

"When I look back on the season, I have had two races where it just did not go well. Those were China and Monaco, I blame myself for that."

Porsche confirmed Brendon Hartley will be one of its 'works drivers' next year but did not reveal where he will be racing. He is not included among its 12 drivers which will compete in the Le Mans 24 Hours.

"We now have the opportunity to create, or emulate, one of my favourite liveries of all time which was the iconic JPS livery pioneered by Lotus. And I think that's really exciting, I think we're going to have the best-looking car on the grid."

Hakkinen: Another great season shows that F1's future is in safe hands (Unibet)

"I believe that under Liberty Media the sport is in good hands. There are a lot of positives to consider and they are working hard to improve every aspect of the sport, not only to create more overtaking."

"OnePlus is to host a 'Salute to Speed' event in Woking, UK, on December 11th in conjunction with Formula 1 team McLaren. It seems likely that we're about to see the release of a limited edition device in the same vein as Huawei's Porsche Design models."

Did Valtteri Bottas improve in 2018?

I do think he was clearly a step up from last year near the start of this season despite what happened in Australia. Even then, he didn’t look to be slow. He was actually looking quick from his previous laps that day. He made one mistake big enough to crash. But it wasn’t like Hamilton didn’t do that once or twice a season in recent years.

Bottas’s biggest problem is that when he has back luck and any team orders come into play, he does try a bit to hard to make it look like he’s following them. And often doesn’t quite seem to try hard enough to still get the best possible result. Although it has to be said, in the last few races, he seriously has helped Hamilton by holding up the others. I can’t deny it though, he was under-performing in the second half of the season. Though Hamilton i think is possibly at his best ever level. And in the recent races, I think Ferrari and Red Bull have basically matched Mercedes or been slightly better in terms of performance other than in qualifying. That and Hamilton is making Bottas look worse than he really is.

I still have a feeling Bottas is going to be able to improve enough to get a seat in 2020. Ocon may look close to getting that, but they wouldn’t have said Bottas had an option for 2020 for nothing. At the moment, I don’t see it being any more likely that Ocon will get it than Bottas keeping it if he has a solid year. As by then, Bottas will have had three years as well as four with another team. He will be much better in terms of feedback and experience. And if I’m honest, he and Hamilton do look like they get on well which in one way is very good for the team. Also, Mercedes were one of only two teams that kept both drivers for next year. They must be more happy than a good deal of teams were with their drivers. And they did have a chance to get Ocon. But something must have put them off enough to keep Bottas. We can’t tell just yet if Ocon is going to convince them enough to make the swap. As cruel as it would be on Ocon to not let him race for yet another year, I’m not really sure what people have seen that makes them think Ocon would do a better job than Bottas.
Adam (@Rocketpanda)

43 comments on “Norris: McLaren will give me “time to develop””