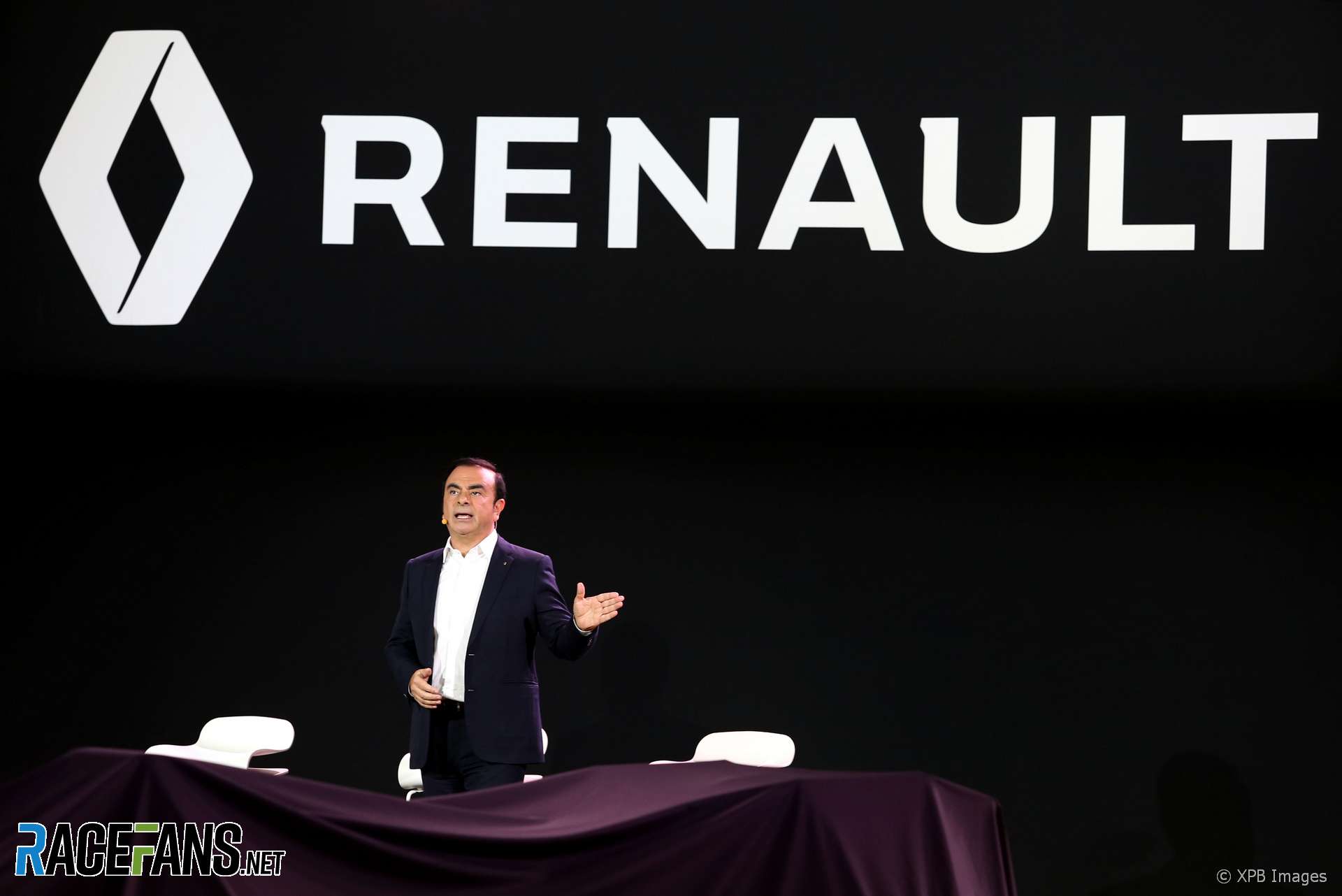 Last month we outlined how precariously Formula 1’s fortunes hinge upon its share price, in turn driven by factors surrounding the sport and the subsequent opinions of investment analysts. Yet, many of these have seldom – if ever – seen a grand prix live or on TV, and base their (critical) analyses on developments that profoundly affect stock value.

At the time we flagged two dates: November 8th, on which F1’s commercial rights holder Liberty Media would field investor calls on Q3 earnings; and November 14th, Liberty Media’s Annual Investor Day, at which the results and prospects of group entities are presented to shareholders.

It conjures images of investor fingers hovering over ‘sell’ buttons as F1 CEO Chase Carey gave his address. Of course, someone somewhere simultaneously hit ‘buy’, but at a reduced price…

When any F1 news – good, bad or indifferent – breaks, share prices react accordingly. This was illustrated earlier this week following the arrest in Japan of Nissan chairman Carlos Ghosn, who is also Renault CEO/chairman, architect of the Renault/Nissan/Mitsubishi alliance and, crucially, the man who sanctioned Renault’s two last returns to F1 as team owner: first in 2001 and again in 2015.

That the motorsport fortunes of Renault and Nissan are intertwined is clear from their activities. Where once the French brand contested both F1 and Formula E, Ghosn decreed that Nissan, the alliance’s electric segment leader, should become the group’s flag bearer in the latter championship. The transition was seamless.

Whether or not Ghosn is ultimately judged to have broken the law, the situation inevitably creates uncertainty around the alliance’s prospects, and thus Renault’s future. And if savings need to be made, the first cost centres to be scrapped in such instances are not the ‘must-haves’ but the ‘nice-to-haves’ – like F1.

Almost immediately after the news broke both F1’s share prices were hit, falling from Monday’s FWONK opening price of $31.54 to $29.87 by close of business, a drop of over five per cent, or almost the same percentage as Renault’s price dip. Matters had not stabilised by late Tuesday.

Prices hit six-month lows on Monday, trading perilously close to 12-month floors: a far cry off a high of $39.03 exactly a year ago – representing a 25 percent drop in 12 months. While it’s true global stock indices have fallen across the board, these have generally been in the order of less than 10 percent.

Lest there be accusations that F1’s current share price had been hit by other factors or pure coincidence, consider the drop in mid-July (graphic), after news broke that Ferrari CEO/President Sergio Marchionne had was hospitalised in a critical condition: On July 19th, ahead of the German Grand Prix, it traded at $38.19, a day later, as news trickled through that the Italo-Canadian had been admitted, so the price fell.

After Marchionne’s untimely and tragic death on July 25th the price had dropped by 10 per cent in under a week – underscoring how fickle markets are about uncertainty, for Ferrari’s F1 future was suddenly unclear. True, he had threatened to withdraw the Scuderia from F1 unless future commercial terms were up to scratch, yet causing nary a dip; now, though, Ferrari’s entire profitability was at stake.

By way of comparison, Ferrari’s (NYSE) RACE ticker recorded drops from $140 to $118 during a ten-day period after July 19th, then slid further through to this Monday past, when it traded at under $110 – mirroring F1’s share performance. Coincidence or connection?

Despite widespread expectations that Ola Källenius would replace the man whose moustache rivals that of Carey, the price fell immediately, hitting EU50 earlier this week. Again we’re looking at a 10-plus percent drop of what is usually stable stock, albeit over a period of two months.

Never mind that the Swede – and the first non-German to head Daimler – has F1 form, having been McLaren Operations Director during their noughties partnership; never mind that Källenius, a numbers man by vocation rather than engineer as were all his predecessors, thereafter heading HPP for two years: FWONK immediately took a dip.

It works the other way, too: F1’s share price rebounded to six-month high of $38.75 on 17 September, tellingly the first trading day after Ross Brawn unveiled concepts of 2021 cars in Singapore. Then, as teams increasingly expressed doubts that such designs could grace grids, the price stabilised before falling. By the Japanese Grand Prix – three weeks later – it had shed 10 per cent.

Understandably Liberty views said manufacturer teams – all of which had or face changes at their very tops, albeit for vastly different reasons – as crucial to F1’s future. Why else would the commercial rights holder have acceded, admittedly in unison with the FIA, to demands that the sport U-turn on (signed-off) 2021 engine regulations and largely retain the current format? Or to a phasing in of budget caps via a glide path through to 2023?

These share price wobbles illustrate just how vulnerable Liberty is to a mass exit by a manufacturer block. Recall 2008/09, when Honda, Toyota and BMW withdrew en masse, and Renault remained only as engine supplier. A repeat of that situation would leave F1, and its all-important share price, at the mercy of a single manufacturer: Honda…

That said, now consider that F1 is a fringe activity to manufacturers. An important one, true, but still only an ingredient in their marketing/product mixes.

Assume Källenius dons his bean counter hat. Or that Ghosn’s replacement – likely to be current COO Thierry Bolloré, a man steeped in automotive component supply and production rather than high-level marketing and former leader of Renault’s E-vehicle project – has an aversion to the costs of F1. Either or both could lead their companies out of F1.

Yes, apparently Renault is committed to F1 for 10 years, but so what? The sport has changed out of all proportion since 2015, having new commercial owners and (still) no clear-cut plans to level the commercial playing field. Any attempt to force the issue would keep France’s top lawyers in top-class splendour for decades, plus likely embarrass Liberty in the process. Imagine the impact of that on the share price.

Ditto Ferrari: Marchionne’s replacement Louis Camilleri had expressed no unequivocal commitment to F1 – how could he, given no concrete plans have been presented? – while the impact on FWONK after Marchionne’s passing is tangible. Imagine a total withdrawal by Ferrari.

The fact remains that manufacturers come and go, having done so over the ages: Alfa Romeo (twice), BMW, Jaguar, Maserati, Mercedes (1955), Porsche, Renault (thrice) Toyota – and this list excludes specialist or low-volume brands such as Caterham, Lotus and Matra, plus long-time engine stalwart Ford. Then add in how close Audi is said to have come to an F1 entry until Dieselgate scuppered its plans.

Don’t put it past Ferrari to exit unless its demands are largely met – forget not that Marchionne took the company to market and the same analysts as dissect FWONK subject RACE to the same treatment.

Thus it makes sense for Liberty to woo the independent teams who, after all, exist to go grand prix racing. But do the markets realise how crucial they are to F1? For four weeks during the summer break F1’s shares bounded between $34-36, finally rallying at $37. The cause? Force India’s administration, from which it finally exited at the end of August.

True, the swing is nowhere near as marked as our trio of examples; understandable in view of the team’s lower ranking in the pecking order, but still the markets paid attention. In fact, question were posed to Carey on this topic on November 14th, significantly, three months after Force India was resurrected.

Do circuits and future grand prix venues have similar effects on share price? Not if Vietnam is any indication: The event, an open secret for many months prior to confirmation, was announced to great fanfare on November 7th, conveniently (coincidentally?) timed for the Q3 earnings call a day later. Did FWONK move? Marginally upwards – by $0.38. Now, a fee of $100m/annum would have sent stock soaring…

A week later, during Investor Day, Carey indicated that “unattractive [commercial] races”, i.e. those that jib at paying top dollar for dates, are to be replaced by other, more flush venues – causing prices to bump slightly before heading south. Admittedly Carey’s comments were made amid myriad other points, but indications are that analysts prefer traditional venues, rather than a hop-about.

They are no fools, and clearly established that new venues face a 50% mortality rate after five years (already there is talk that Azerbaijan could exit within two years, which would maintain that figure) whereas the likes of Silverstone and Monza resonate with fans and investors alike and have been about since the fifties.

Figure: when Silverstone last year announced it had triggered its exit clause, the stock immediately fell 10 per cent. Compare that to Vietnam’s bump.

Of course, various factors can affect prices (and perceptions) at any time – this does not cover every conceivable base – but these examples serve to illustrate the high-wire act Liberty faces as it gears up to F1’s post-2020 future.

Manufacturer teams are bent on retaining their bonuses and various benefits, while the independents are pushing for equitable revenues and equal say in the governance process, while the traditional venues are clearly not prepared to risk liquidation simply to host a grand prix. Ne’er, twain, meet…

Liberty says it has options aplenty – conceivable, but consider that thus far it added but one new venue (Hanoi), first rumoured (and allegedly dumped) in 2016, before Carey and co. had signed for F1’s keys. Thus they will battle to persuade analysts – who patently have a history of examining every aspect of F1 – that a host of alternatives exists.

The bottom line is that, where previously the only tangible measure of F1’s success, namely an ability to turn profits with which to (partially) fund teams, was revealed once a year, incoming CRH faces scrutiny by a venerable horde of analysts on a daily basis. Their jobs are to play number games after investigating every angle and implication.

That much became clear as news of Ghosn’s arrest broke – yet Nissan is not represented in F1 as a team, let alone as a brand.

Equally, it is clear that analysts react rapidly to negatives and gradually to positives – certainly as it affects FWONK/FWONA – and hence the sharp downward movements but gradual rises. That suggests little confidence in F1 stock, and by extension, Liberty’s management of F1 going forward. Consider that not a single team took up Liberty’s preferential share offer at time of listing.

In the final analysis, Liberty’s stated plan to play the long game with teams and circuits (and broadcasters) could well be punished by investors and analysts unless a flow of solid news eventuates sooner rather than later. That, though, may not be totally under Liberty’s control, as the Carlos Ghosn saga proves.

NB: All share prices quoted in applicable stock exchange currencies, and have not been converted as they illustrate trends rather than direct comparison with F1’s share pricing. To avoid confusion and eliminate repetition, only FWONK prices are quoted. FWONA generally mirrors the Class C share, and, if anything, has been the more volatile.