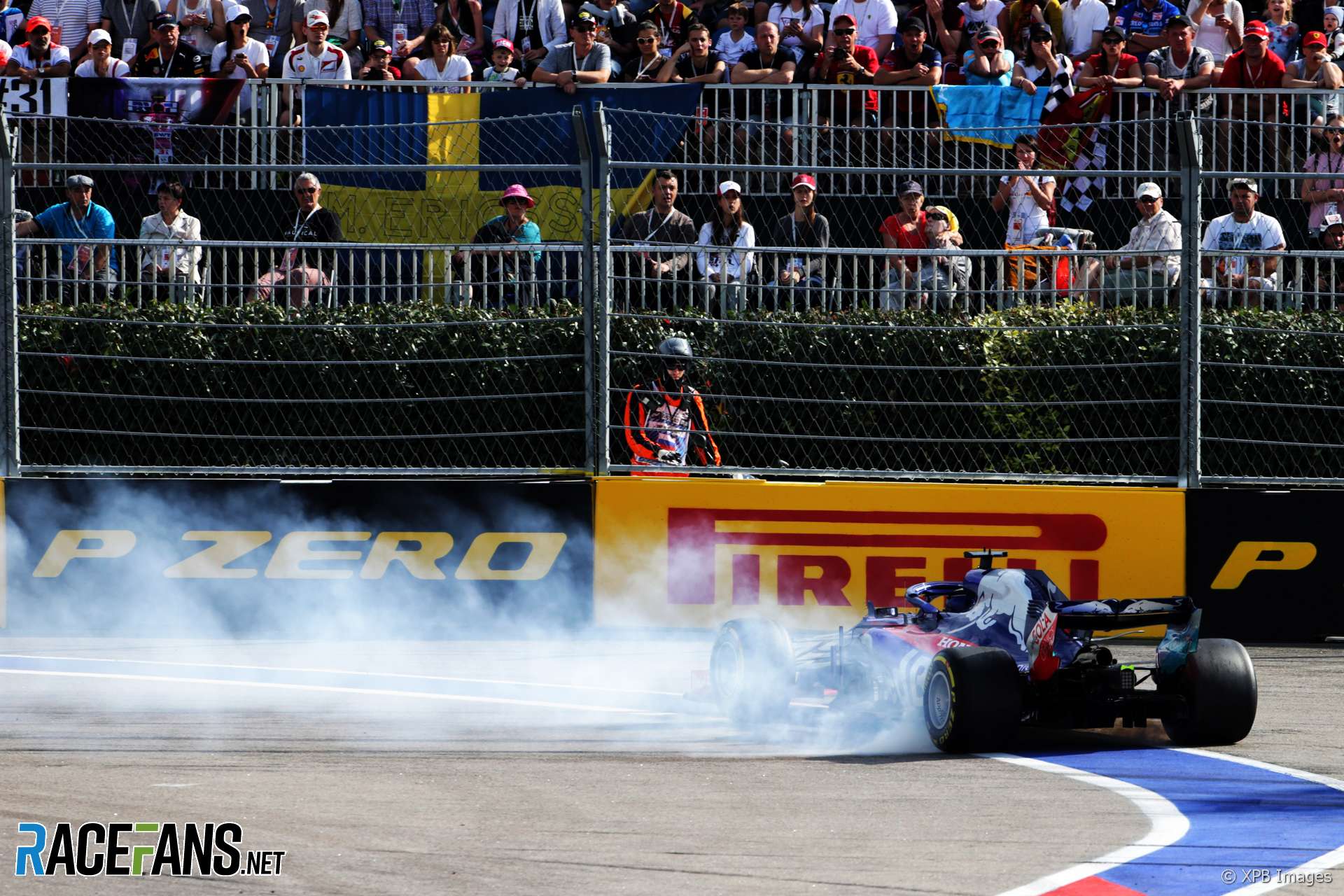 Brendon Hartley and Pierre Gasly suspect their near-identical spins and early retirements from the Russian Grand Prix were caused by a front brake fault.

Both drivers reported braking problems on the radio during the race: Gasly shortly before his retirement and Hartley just before he was told to pit.

According to Hartley the pair suffered “exactly the same problem” on their STR13s.

“Mine started on lap two so I reported some oversteer from the car, then the pedal started going a bit long. We pitted on lap three or four, three I think – which was planned, we were planning to put the soft tyre very early which was not a bad strategy as the soft tyre was the best one – but as I arrived at turn one I had a brake failure of some description where the rear brakes locked immediately.

“I was quite close to going in the wall but I kept it out and got it back to the pits but I think the exact same issue happened on the other car at almost exactly the same time.”

Toro Rosso team principal Franz Tost said that the problem was partly caused by overheating brake fluid but that the root cause was not yet clear. No changes had been made to the braking system over the weekend, he added.

“For whatever reason we ended up with very hot front brakes and one piston in the calipers got stuck. This caused the overheating of the brake fluid and a long pedal. Therefore, we called the drivers to come to the garage.

“Obviously, being in Parc Ferme conditions, we didn’t change anything from yesterday, so we need to investigate further what the reason is.”

Both cars lost front braking, seemingly without warning. Gasly said that the problems were undetectable even on the formation lap.

“[The] lap to the grid, everything was fine. We saw some smoke, a little bit when I did my practice starts, coming out of the front brakes but nothing strange with the pedal feelings.”

Both drivers reported the rear, regenerative brakes were working and the failure appeared to occur on the front, brake-by-wire system. Hartley reported “the rear brakes came on” on his car “so I think it’s something to do with the brake-by-wire.”

“But obviously they’re still trying to understand exactly why and what was the initial failure. I don’t know exactly what failed but in any case when I hit the brakes in turn one I only had rear brakes.

Hartley said he was still confident the problem could be resolved before power unit supplier Honda’s home race at Suzuka this weekend.

“I think the fact that both cars had a failure on the same lap is no coincidence and I’m sure they’ll figure it out very quick, in terms of parts on the brake system it’s no different from the rest of the season so I’m sure they’ll be on top of what caused it quickly. I don’t have any concern about that, to be honest – considering it happened to both cars I’m sure the answer will be quite clear.”