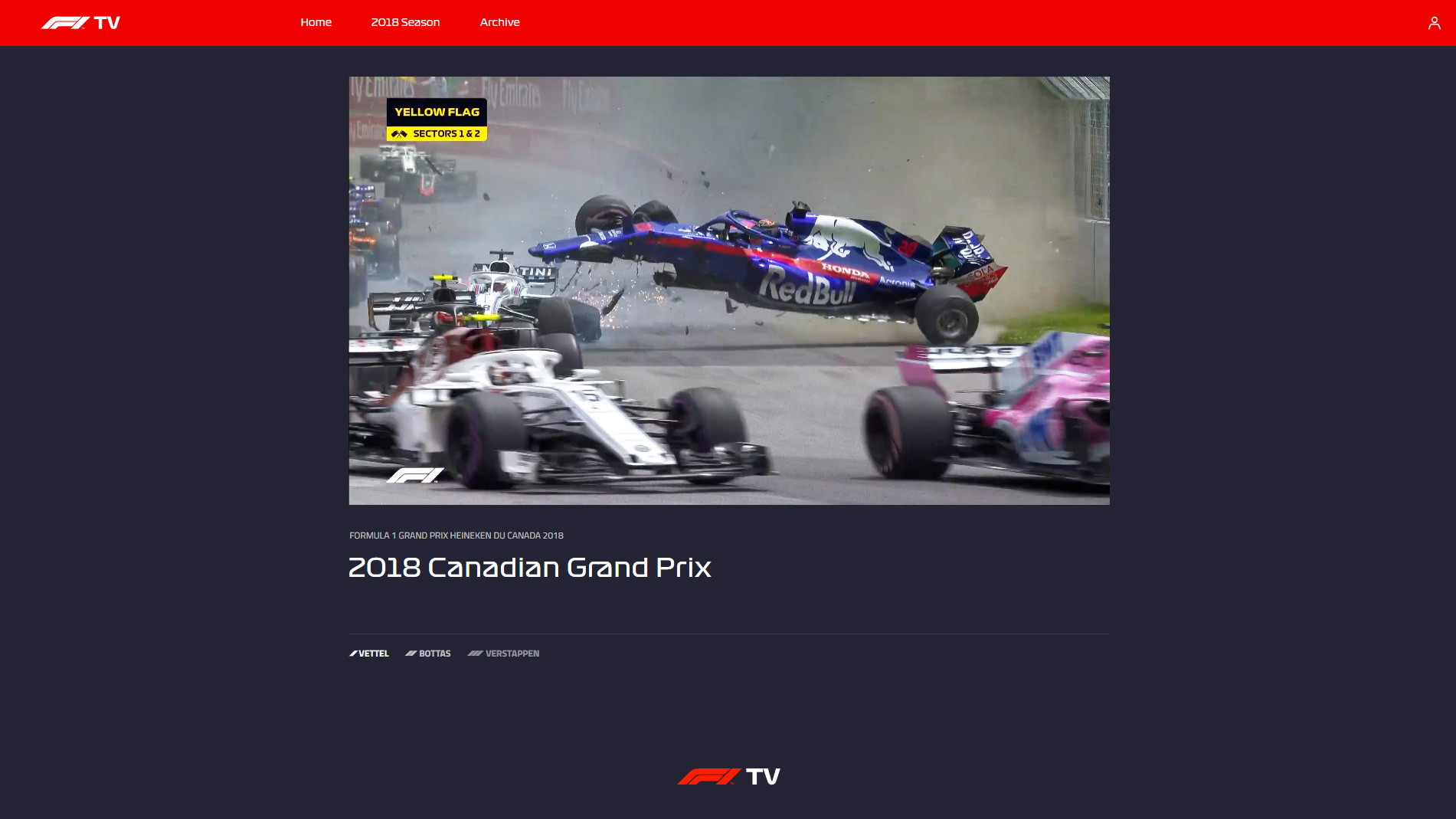 Having elected to attend last week’s FIA Sport Conference in Manila, I skipped the Canadian Grand Prix as even the best connections would deliver me to Montreal late on Friday following after 20 hours in the air with 12-hour jet lag.

Thus the weekend provided a perfect opportunity of reviewing F1 TV Pro. As a Belgian I live in one of the 40 or so countries where it’s available, rights restrictions preventing

Formula One Management kindly provided media log-in credentials so I looked forward to a weekend of Over The Top viewing – as Netflix-style streaming directly to consumers is termed – from Montreal.

Since BBC lost the F1 television gig at the end of 2015 I’ve been unable to catch F1 in English. So the five or so races I’ve missed in as many years I’ve followed on RTL Germany with ex-F1 racer Christian Danner’s insightful commentary. However Friday’s practice sessions are broadcast on associate channel NTV and FP3 is skipped completely. The biggest downside to RTL, however, is a plethora of commercials that totally spoils the viewing experience.

Interruption-free F1 TV Pro would, I hoped, prove just the ticket for the Canadian Grand Prix. But while perusing F1 TV’s FAQs I spotted a snag: English commentary is not available in Belgium “due to existing rights agreements”…

Nonetheless I logged in on Friday shortly before first practice and started navigating my way around. The initial process was fairly intuitive, and I watched the session on my laptop in my office. At first I was struck by the excellent picture quality, a clear improvement over RTL’s broadcast.

An odd initial problem was the huge variation in volume between the four sound options. FX, the commentary-free atmospheric noise option, was loud, as if they had cranked up the car sounds. Curiously I was offered an English language option, along with Spanish, French and German. But the latter was inaudible unless I wound the volume right up, and even then still too quiet for comfort. 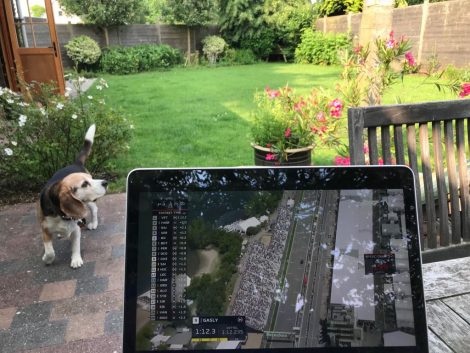 This trend continued throughout the weekend, even when I tried streaming via Apple TV, so I spent a lot of time fiddling with volume controls.

Many early users of F1 TV have encountered buffering problems. I began to experience them at around 5pm on Friday – 11am in Canada, thus two-thirds into FP1. I put it down to folk heading home via Waze or other internet-consuming Apps, but subsequently learned that users in other regions had similar issues.

I rebooted but the problem remained, on top of which the English language option had now disappeared. Had the system ‘forgot’ I was in Belgium and thus permitted English commentary? Or does my or media log-in had English commentary regardless of territory and the system ‘forgot’ that blocked a Belgium IP address?
Either way the inconsistent behaviour indicates something wasn’t working right.

I streamed second practice to my Philips LED 4K via Apple TV, but only after experiencing major issues with the latter. By now the mismatch between the pictures I could see and the commentary I could hear was beginning to grate.

F1 TV shows the world feed yet uses commentary from other broadcasters. These can, and do, incorporate their own footage which doesn’t appear on F1 TV.

Watching the English-language Sky broadcast therefore became a frustrating experience as Sky’s own crew homed in on some detail, which Croft and co. then discussed, leaving me wondering what exactly they’d spotted. Ted Kravitz’s description of the ‘scrutineer in the green tabard behind the car who’s been tasked by (FIA Technical Delegate) Jo Bauer to keep an eye on Ferrari’ sounded intriguing – pity I couldn’t see it.

Most annoyingly the commentary team broke away regularly for commercials, leaving me completely without commentary. Crofty haters may view it as a blessing (sorry, David) but I’d prefer to choose for myself than have Sky producers dictate breaks when they needs to pay the rent. It makes F1 TV Pro seem a secondary service.

These aggravations continued throughout the weekend, reaching a peak when Martin Brundle embarked on his grid walk, yet all I saw were totally unrelated visuals of celebs quaffing away in the Paddock Club.

On Saturday I came to appreciate how convenient OTT can be. I watched final practice in my garden under sunny, 25C skies, streaming the footage over wifi. 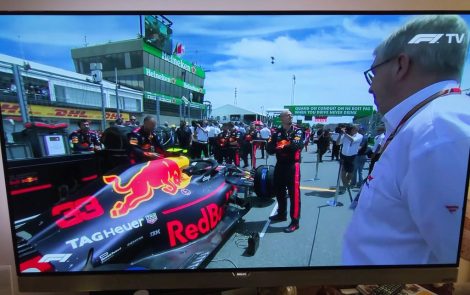 Given how stable the picture was, I decided to experiment with some of the settings. I found the menus difficult to navigate, and could not watch timing and track action simultaneously.

Either I’m stupid or F1 TV Pro is utterly unintuitive – or both. Whatever, I followed qualifying and race I watched with the pictures on my television and my laptop on the timing screen – but neither provided ‘unplugged’ radio. After the flag I switched to F1 TV Pro on my laptop and simultaneously watched podium stuff on RTL. Lo and behold, the latency between the two was over 40 seconds. Thus most television audiences knew the outcome 40 seconds earlier than those using F1’s own ‘pro’ service!

Suddenly in mid-Croft-sentence the service stopped, with a brief message telling me the broadcast was terminated. No thank you, no goodbye, no see you in Le Castellet: just, boom, black screen.

The acid test: Would I subscribe? Probably, but only if it had a British commentary option in Belgium without commercial breaks during the race (sorry Christian, but English is my ‘main’ language and German my ‘home’ language). But on the basis of the current offering I would do so most reluctantly.

Would I subscribe if I had the option of a premium broadcasting service such as Sky? Not yet…

Indeed, I would go as far as suggesting that “F1 TV Pro” falls foul of trade descriptions acts, for “F1 TV Amateur” is where the service currently is. For example, FAQs openly admit that there “will be great features in months to come”. Come on, this is allegedly a Pro product, for which full price is being charged.

Yes, it has potential – massive potential – but the touch and feel is of a beta service, with the overall direction clearly steered by F1 outsiders with no clue about the audience. When all is said and done, it seems churlish to demand subscriptions for what is patently a work in progress. My suggestion is that Formula One Management select beta testers by ballot, then perfect the service. Only then can it be considered “Pro”.