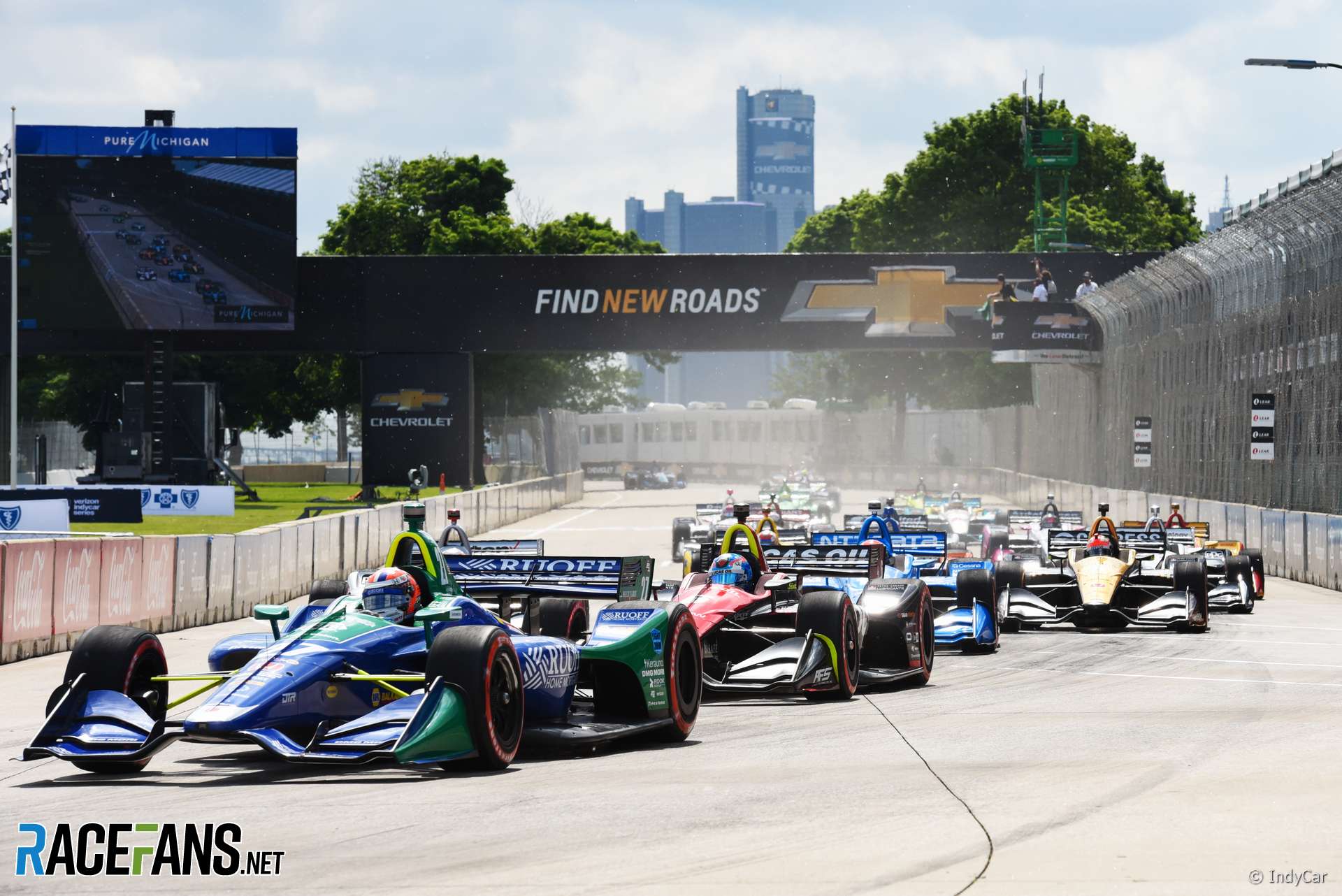 Catch up on video highlights of last weekend’s racing action in Weekend Racing Wrap including IndyCar’s double-header at Detroit, F3 and DTM action from the Hungaroring and NASCAR at Pocono.

Results spoilers are hidden by default. Use the buttons below to reveal race reports.

Paul di Resta took his first pole position in two years for the opening race, but could he convert it to his first win of the season? Meanwhile Auer took pole position, but it was the heavy rain and resulting chaos that created the story of the race.

Show DTM race report
Di Resta did take the win, but had to fight for it after losing out in the pit stops. He fought back past Muller on the outside of turn one with a small amount of contact, and Lucas Auer let him through to the lead on lap 23 as the former F1 driver proved quicker. The second race started in the dry but rain came down on lap four, causing chaos. In a slippery pit lane, race leading Auer – along with Edoardo Mortara and Bruno Spengler – all crashed in seperate incidents, resulting in injured marshals and pit crew and a red flag. After the race restarted, it was Marco Wittmann who took the win ahead of Timo Glock and Philipp Eng.

Dan Ticktum returned to F3 following his sojourn to Japan and took a pair of pole positions for Motopark, the third going to Hitech’s Enaam Ahmed.

Show European Formula Three race report
Although Alex Palou made a horrendous start from the front row of the grid, pole sitter Dan Ticktum was unable to keep Guan Yu Zhou from taking the lead at the start. Ticktum hit back swiftly, however, and re-took the lead. He held it to the end pursued by a quartet of Prema drivers: Zhou, Robert Shwarzman, Mick Schumacher and Ralf Aron. Ticktum lost his advantage from pole again in race two but this time he never reclaimed it and later retitred. Enaam Ahmed led from lap one to the chequer, and was joined on the podium by Marcus Armstrong and Palou. Ahmed and Ticktum led the field one-two throughout the final race, while a superb start from Schumacher propelled him from ninth on the grid to take the final podium position. Ahmed therefore becomes the first driver to win two races this year and leads the points standings heading to the Norisring.

Show IndyCar race report
Scott Dixon mastered the fuel strategy to win race one after last year’s double winner Graham Rahal crashed out heavily. Dixon was followed by a trio of Andretti cars: Ryan Hunter-Reay, Rossi and Marco, the latter swapping places in the closing stages. Rossi led race two convinceningly from pole position but Hunter Reay went on the attack with a three-stop strategy to Rossi’s two and closed on his team mate in the final laps. Rossi locked his brakes and went up an escape road with six laps remaining, plunging to 12th after a puncture, leaving Hunter Reay to become the series’ sixth winner from eight races so far. Having lost the points lead on Saturday Will Power regained it on Sunday with a fine second at a track where Chevrolet were at a disadvantage to Honda.

Show NASCAR Cup race report
Kevin Harvick led more than half of the race but missed out on a sixth win of 2018. Reigning champion Martin Truex Jnr took the second win of his title defence.

Thanks to Bradley Downton for contributing to this article.