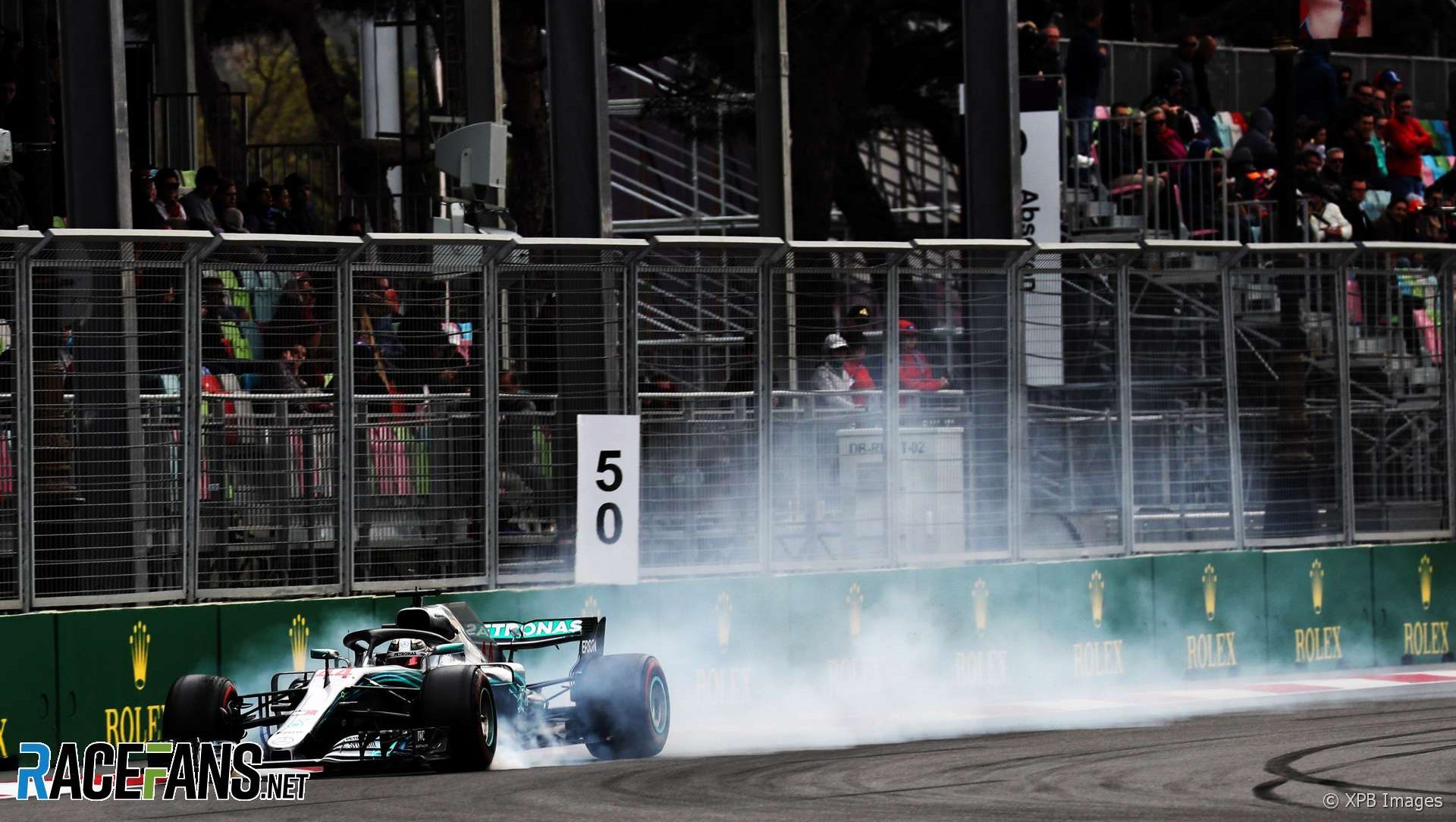 Lewis Hamilton said a sudden change of wind direction caused the lock-up which ruined his pursuit of Sebastian Vettel during the Azerbaijan Grand Prix.

The lock-up at turn on lap 22 cost Hamilton vital time as he was trying to get close enough to Vettel to attack him through the first round of pit stops.

Hamilton described how he had begun to catch the Ferrari when he went off.

“Ferrari starts quicker, they seem to get their tyres switched on better, [they] pulled out a 2.2 seconds lead of something like that. And all of a sudden [my] car started to work a little bit better and I started to rein him in.

“I got it down to about 2.2 or something at one point and it was looking good. And I was thinking if I stay on this trajectory, because the car was getting better those four or five laps, I was going to catch him.

“Then I had this lock-up and I was completely baffled with what happened. Normally when I go upstairs [to the engineers] they say it’s just a mistake or something like that.”

The Mercedes driver experienced a sudden shift in wind direction from a 25kph headwind to a 15kph tailwind.

“It was really strange,” said Hamilton. “I hit the brakes, the car was working, and then all of a sudden the wheels just locked. The car must have unloaded or whatever.

“That was frustrating because I think I’d driven pretty well up until that point and after that it was a bit of a struggle.”

Valtteri Bottas then became a threat to Hamilton’s position by staying out on his first set of tyres.

“It was probably the most difficult race that I can remember having. All the wind particularly really made it the toughest race. Close to a wet race, for example, you know how tricky those conditions can be. Very close to that, in dry conditions.”

The race swung in Hamilton’s favour in the final laps when Vettel and Bottas hit trouble, handing him the victory. Hamilton said the win gave him a “humbling feeling” on a day when he hadn’t performed at his best.

“I came into yesterday thinking maybe third time lucky and it really was the case today. There was points in the race when I thought I might have the chance to win. And then I had the lock-up and I really [thought] that’s taken me out of the race and I [was] struggling afterwards with the tyres.

“But I was like keep going, kept telling myself keep pushing, don’t give up, something might happen. And it did.”

“It was really a reminder to me, not that I needed to reminding, my whole life I’ve been through experiences like today you’re climbing a hill and you keep slipping down. I’m going to get there. I remember my dad telling me never give up when I was really young and having that today. That affects all life when you’re trying to be successful. You try, you fail, and eventually you succeed.

“And today was sheer proof of that. Of course it was affected by other things but ultimately I don’t feel completely unworthy of the win, I still feel I drove pretty well during the race, it was just for me if my normal level is eagle, birdie, today was some pars on average and a couple of bogeys. And normally when I play golf it’s triple bogeys.”