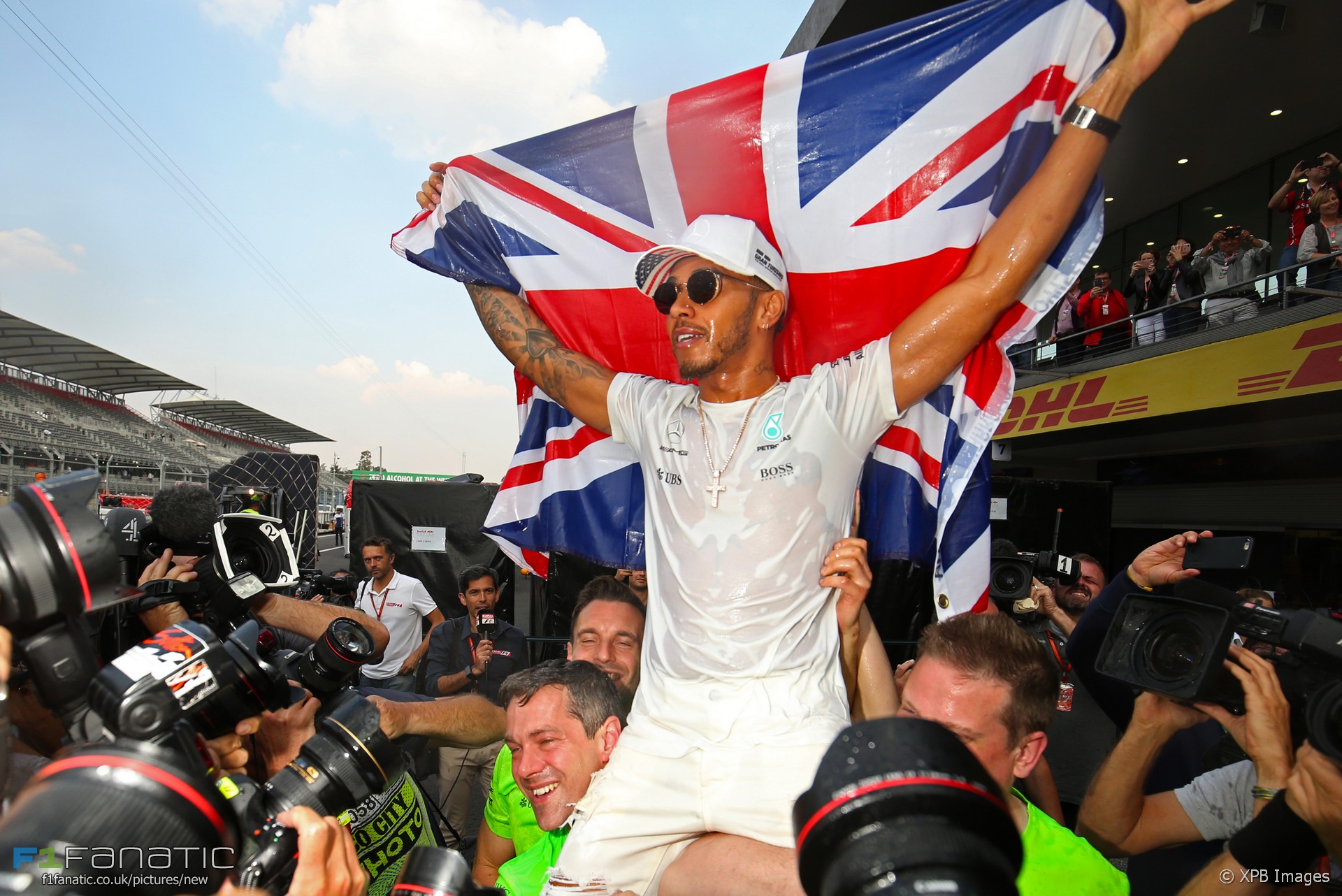 “Four is a great number,” he told journalists after yesterday’s race. “I want number five now.”

In a lengthy post-race discussion with the assembled media Hamilton described the changes he’d made in his approach to racing this year, such as working without a personal trainer.

“The way I’ve prepared this year, contrary to what people may think, training on your own, ‘no-one can train on their own’ that’s what people would say. Travelling around the world the way I do, all these different things.”

“But just doing it your own way and finding your own way I think, it’s a day like today, when you win a championship, in front of so many people, it just solidifies your belief in yourself and your families belief in you, and what they stand for.”

“I’m proud of all my family and it’s crazy to think that I’m continuing to stamp the Hamilton name in the history books. Beyond my time there will be kids that will know the name and that’s probably what I’m most proud of.”

“I can’t even tell you what my dad did to help me get where I am today. No matter how many wins I get, no matter how successful I am, I can never pay that back, but I just try and grab it with both hands. The opportunity that they’ve provided me and know also that there’s a lot of kids, a lot of people around the world, that are watching me, whether it’s for inspiration or for guidance, and so I’m trying to be the brightest light I can to shine that in their direction.”

Hamilton said he hopes his achievement inspires other young people to pursue their dreams.

“I hope my winning the fourth time, world champion from Stevenage, I hope that’s a testimony to show that you really can do something from nowhere,” he added. “I hope one day I’m able to help find the next me because he’s somewhere out there.”

“When I was growing up there was a couple of teachers that said ‘you’re never going to amount to anything’,” he added, “so I wonder what they’re thinking now when they watch me today?”

“For sure, they’re probably watching. Or at least they’ll read the news tomorrow. I wonder what they’re thinking? I wonder if they’re thinking ‘I helped that young lad,’ or are they thinking ‘you know what, I regret what I said and I’ve grown from it.’ I hope that’s really the case. I hope they’ve grown though it. I hope that whoever’s kids they are teaching today, they’re encouraging them, rather than pulling them down.”

Since he joined Mercedes in 2013 Hamilton was won the world championship three times. “I wonder how many people in here thought it was the worst move to Mercedes,” he said.

“Of course it’s been years already before you’ve changed your opinion – but isn’t it cool? Isn’t it cool to see someone take a risk like I did and it to come out the way it has? I’m really, really happy about it and proud of all the people that have helped me achieve it and looking forward to the future.”

Hamilton paid tribute to his championship rival Sebastian Vettel, saying that fighting against another driver of similar success is how the championship ‘should be’.

“To be able to battle someone else who is a four time world champion, a proven world champion, who’s got great skill and a team also that knows how to win championships, to extract the most from my guys, to compete with that, that’s how every championship needs to be,” he said. “I hope there’s more championships like this one where we have this tough battle.”

“I’ve enjoyed it this year more than ever”

Next year is Hamilton’s last on his current contract at Mercedes, but he indicated he isn’t ready to stop racing soon.

“I’ve enjoyed it this year more than ever,” he added. “I do think about [how] it would be so nice at some stage just to live in one place, a lot more socialising, walking your dogs every day or surfing, whatever it is, but staying in one place for a period of time.”

“But then I’m thinking there’s a lot of life to live beyond 40. There’s a lot to go and so the balance is: I can’t come back to Formula One, so there’s going to be a point in which OK, I’ve had enough.”

“I’ve already been blessed and had such a wonderful time here in these ten years. Hopefully I have my place here and I’m going to continue to – whilst I’m at my best – continue to try and… and I want to go out on top so that’s my goal.”

“Obviously each year, I could do the easy thing like obviously Nico [Rosberg] did which is just stop and retreat with these four titles, but I think there’s more in me, I think there’s more to come, more of a challenge, as there’s harder times ahead and I like that, I love that, that’s challenging.”