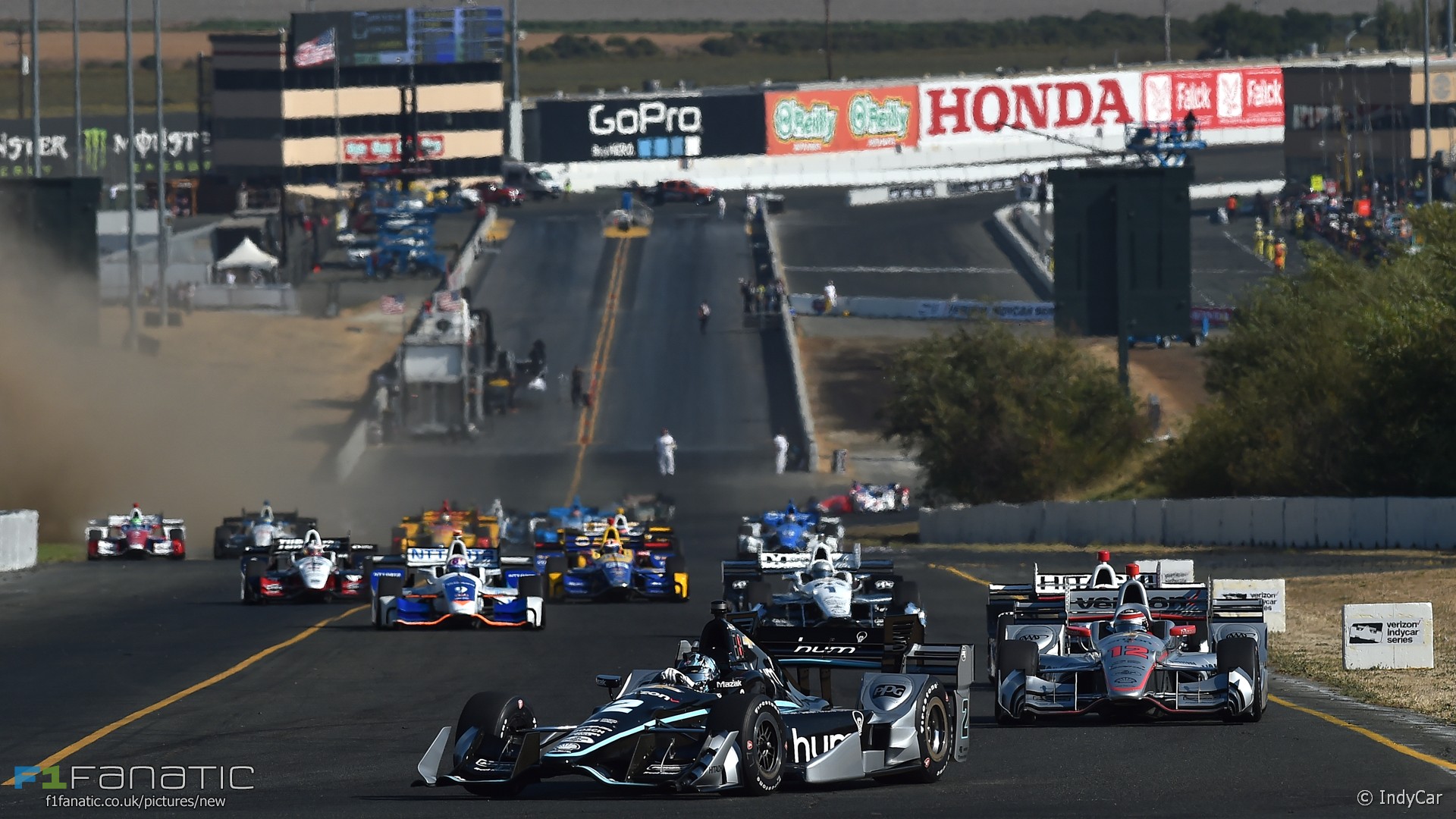 Five drivers started the final race of the IndyCar season with a realistic shot at the title at Sonoma in California.

Mathematically, seven drivers had a chance to win the IndyCar championship in the final race. Realistically that number was reduced to five as soon as the race began, and Penske’s conservative approach meant only two of their four title contenders were ever really in the hunt.

Even so they made a great race of it. The 85 laps of Sonoma ran caution-free and were enlivened by a bold strategy from Simon Pagenaud. The reigning champion’s aggressive four-stop strategy paid off as he emerged from his final pit stop ahead of points leader Josef Newgarden.

With Pagenaud needing to both win the race and have Newgarden finish a few places further down the order, this was his cue to mimic Lewis Hamilton’s tactics from last year’s F1 title-decider and back his rival up. But he declined to do so, concentrating instead on holding onto his lead while dealing copying with heavy late-race traffic.

Scott Dixon, who arrived in Sonoma just three points behind Newgarden, found himself effectively boxed in behind the trailing Penskes for much of the race. He eventually made it by Helio Castroneves but Penske teamwork successfully eliminated the biggest threat to Newgarden’s title hopes.

The 26-year-old clinched the championship in his first full season with Penske after an outstanding season which included wins on road, street and oval courses. Pagenaud’s victory served as a worthwhile reminder that he had to overcome serious competition from within his own team to take the title.

A slow getaway from pole sitter Jack Goff in the opening race saw Ingram rocket into a lead he never relinquished, while Goff followed him home second with Adam Morgan third. The race was red-flagged early following a massive accident involved Rob Collard, Will Burns and Andrew Jordan. While no drivers were seriously injured, both Collard and Burns were taken to hospital, the latter with broken ribs.

Goff got payback in race two by beating Ingram to the flag, while a battle between Turkington and Sutton – who’d finished fourth and fifth in race one – went right to the final corner and ended in contact. Sutton dived up the inside but a touch sent Turkington wide, and despite Sutton crossing the line third he lost out to Turkington after the stewards slapped him with a penalty. To make matters worse for the Subaru driver, he was then sent to the back of the grid for the final race with the incident counting as his third strike this season.

Turkington looked set to gain ground starting much higher up, but Silverstone had one more twist up it’s sleeve. Turkington was bumped wide on lap one and slipped down the field before becoming caught up in another accident a couple of laps later, and ending up effectively out of the race. Meanwhile Sutton recovered to eleventh while Matt Neal won ahead of stand-in and returnee Rob Huff with Dave Newsham completing the podium.

Gordon Shedden and Tom Ingram are also mathematically in the battle with 66 and 67 point deficits respectively, but with only 67 on offer both would need massive helpings of luck on their side.

Race 6: Circuit of the Americas

The number two Porsche of Timo Bernhard, Brendon Hartley and Earl Bamber won for the fourth race in succession which gives them an almost insurmountable lead in the championship.

Porsche were in a class of their own during qualifying but the advantage dissipated in the race, as both Toyota’s quickly relegated the number two Porsche before moving into a one-two position after not changing tyres at the first stop. This proved costly however as the fresh tyres on the Porsche’s worked better as the temperatures rose, catapulting them back ahead, where they stayed until the end.

Mattias Ekstrom finished second ahead of Sebastien Loeb, but the opportunity to take the title in Latvia arose for Kristoffersson after closest rival Petter Solberg was involved in a heavy crash in his semi-final that saw the race red-flagged. The reigning champion suffered a broken collarbone.

Brake failure for championship leader Pietro Fittipaldi in the second race of the weekend at the Circuit of the Americas means six drivers will go into the final weekend with a shot at the title.

Fittipaldi collected a useful third in the opening race, held on Friday, ahead of closest championship rivals Matevos Isaakyan and Alfonso Celis. His team mate Rene Binder took an emphatic win and made his first trip to the podium since his victory at Monza back in May.

Binder’s chances of doing the double were wrecked when he stalled on the grid ahead of race two. Alex Palou kept his advantage from pole position while Egor Orudzhev, who’d finished second on Friday, moved back up to the same position by going around Fittipaldi.

When disaster struck Fittipaldi on lap four it promoted Isaakyan to third and presented him the chance to take the championship lead. But he struggled badly on his second set of tyres, fell to sixth and was fortunate to take the chequered flag after tangling with Konstantin Tereschenko.

Meanwhile Orudzhev jumped ahead of Palou via the mandatory mid-race pit stop and resisted the Teo Martin driver in brilliant fashion as his tyres came up to temperature. He and AVF team mate Isaakyan will go to Bahrain in November as Fittipaldi’s closest competitors, respectively 10 and 25 points behind. Celis, 31 points back, also has a shot while Binder and Nissany’s 49-point deficits means they are mathematically in with a shot.

Race two video not available yet.

Martin Truex Jnr has been the driver to beat throughout NASCAR’s ‘regular season’ and he made the best possible start to the ‘play-offs’ by winning the opening race at Chicagoland.

Against expectations Lewis Hamilton extended his championship lead with his seventh victory of the season in Singapore. Title rival Sebastian Vettel was eliminated following a first-lap collision with his team mate and Max Verstappen.