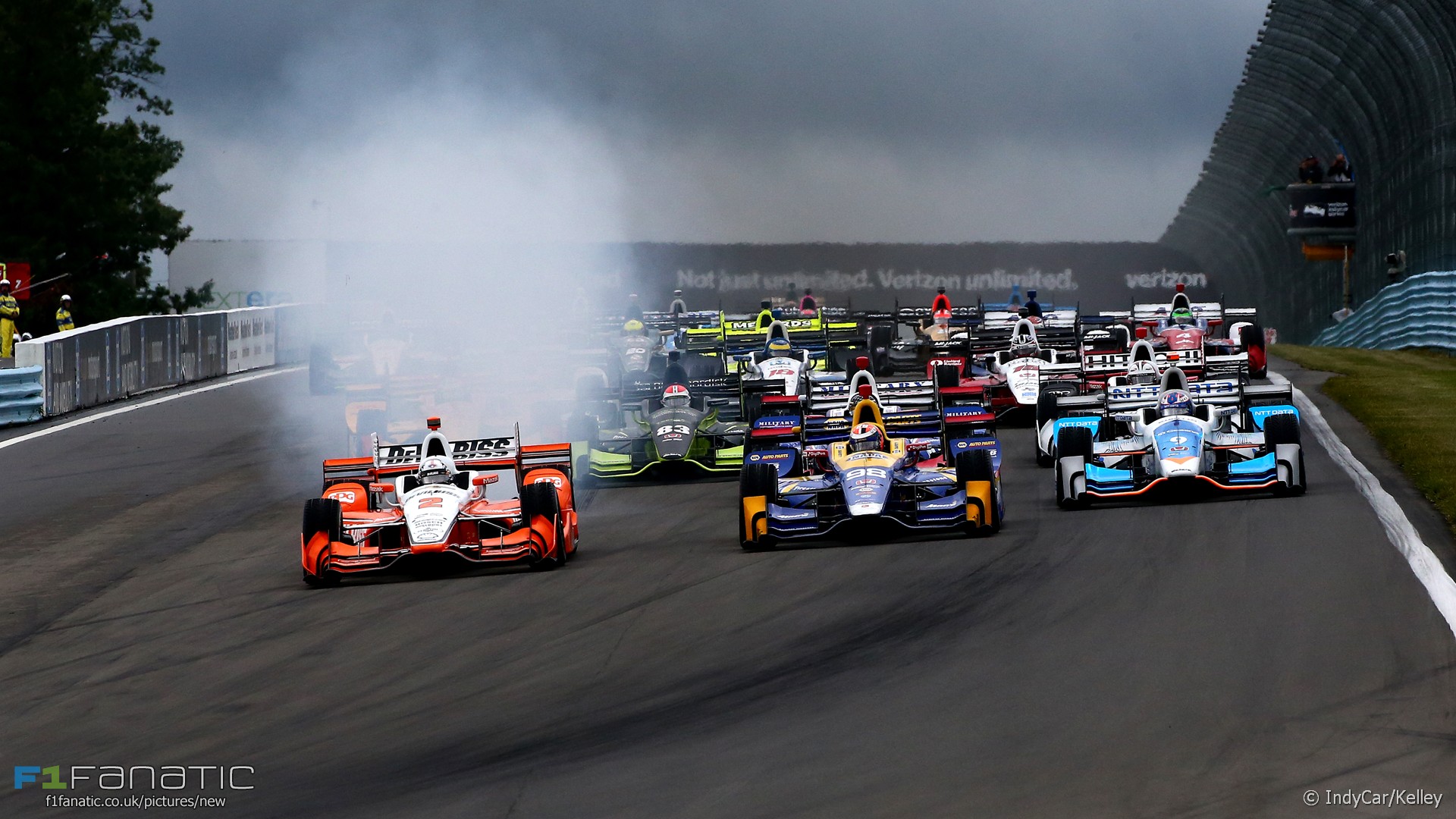 Seven drivers are mathematically capable of winning the IndyCar title in the final race at Sonoma following a dramatic penultimate round at Watkins Glen.

Scott Dixon slashed Josef Newgarden’s championship lead to just three points with one race remaining, but the four-times winner at Watkins Glen had to give best to an on-form Alexander Rossi. The Andretti driver scored his second IndyCar win, and first since his Indy 500 triumph, in the first race after signing a new deal to continue at the team next year.

Damp patches on the track meant the entire field started on wet weather tyres but almost everyone pitted at the end of the opening lap for slicks. Rossi had led from pole but was soon passed by Helio Castroneves.

Rossi’s victory hopes took another blow when he was forced to pit early due to a fuel pump problem. Fortunately for him Takuma Sato spun and brought out a full-course caution two laps later which promoted Rossi back to the head of the field as his competitors pitted.

Championship leader Newgarden held a temporary lead before his final stop but locked his front right on the pit exit and slithered hopelessly into the wall, where he was collected by Sebastien Bourdais. His damaged car was eventually classified 18th, allowing several of his championship rivals to make hay.

By holding Dixon off, Rossi ensured Newgarden will arrive at Sonoma still in the lead of the points. Newgarden, Dixon, Castroneves and defending champion Simon Pagenaud will all go to California with a realistic shot at the title while Will Power, Rossi and Graham Rahal will also be mathematically in contention at the double points finale.

The first race was won from pole position by Harrison Scott, the British driver winning his home race in dominant fashion, completing the Grand Chelem. Devlin DeFrancesco finished in second, the young Canadian continuing good form in the UK after his fifth place in last year’s British F4 championship. Alex Karkosik completed the podium, finishing in third after starting on the front row and falling behind DeFrancesco at the halfway mark. Completing the top five were Ameya Vaidyanathan and Nikita Troitsky, with series debutant Ben Hingeley taking an impressive sixth.

In race two, Scott was again in imperious form, claiming a second Grand Chelem. DeFrancesco finished in second once more, while the podium was this time completed by Jannes Fittje. Hingeley completed an impressive maiden weekend, putting Fittje under considerable pressure towards the end, but the 20-year-old had to be content with fourth position, ahead of Troitsky and Karkosik.

Pietro Fittipaldi dominated both Formula V8 3.5 races in Mexico from pole position and leads the championship with four races remaining.

Egor Orudzhev went off-track at the start of race one, bringing out the Safety Car. Matevos Isaakyan recovered from a poor start to finish second after overtaking the Teo Martin duo of Alex Palou and Konstantin Tereshchenko, who finished in third and fourth respectively.

Fittipaldi took a comfortable race two victory ahead of home favourite and Force India junior driver Alfonso Celis Jnr, with Tereshchenko taking the first podium of his Formula V8 3.5 career. Orudzhev retired for the second race in a row, meaning he conceded a maximum 50 points to Fittipaldi, who is now 53 points ahead with the Russian down in fourth.

Denny Hamlin won the penultimate race of the ‘regular season’ before the Chase for the Cup begins. He led Kyle Busch home in a one-two for Joe Gibbs after early leader Martin Truex Jnr dropped back with handling problems.

Lewis Hamilton won the Italian Grand Prix, becoming the first driver in 2017 to win back-to-back races. He also took the championship lead from Sebastian Vettel who finished third. The two were split by Valtteri Bottas as Mercedes dominated the race.

In F2, Charles Leclerc was beaten in qualifying for the first time as he ended up seventh, with Nobuharu Matsushita taking his maiden pole position. The feature race took place in wet conditions following the heavily postponed F1 qualifying session and was the first to use the new procedure for starting a wet race from the grid following a Safety Car period.

Antonio Fuoco was eventually declared the winner of the race despite Luca Ghiotto taking the chequered flag first at the end of a crazy final lap. A five-second penalty for cutting the chicane on the final lap cost Ghiotto a home win. Leclerc failed to score after being pushed off the track by De Vries – the latter was later given an inconsequential 20-second time penalty.

De Vries had led from the start after Artem Markelov misjudged his braking into turn one, knocking de Vries and Matsushita wide. Leclerc made rapid progress through the field and got a bonus when championship rival Oliver Rowland’s race was ruined by a wheel which fell off after a pit stop. That brought out the Safety Car and set up the frantic dash to the flag.

Ghiotto made amends on Sunday by winning the sprint race ahead of Sergio Sette Camara and Fuoco. Leclerc and Rowland both fought through the field but failed to score. Nonetheless Leclerc can clinch the championship at the next round at Jerez, the only standalone F2 round this year.

Saturday’s rain and F1 delays meant GP3 qualifying and race two were cancelled. Race one was held on Sunday morning and the grid was set by practice times. George Russell won ahead of team mates Jack Aitken and Anthoine Hubert while drama unfolded behind them.

Leonardo Pulcini hit Alessio Lorandi and mounted the back of his compatriot at the Variante della Roggia, both spearing into the run-off and hitting the barriers. There was another incident later on as Juan Manuel Correa hit his team mate Arjun Maini, while Niko Kari – who has recently been dropped by Red Bull as a junior driver – also crashed by himself late on.