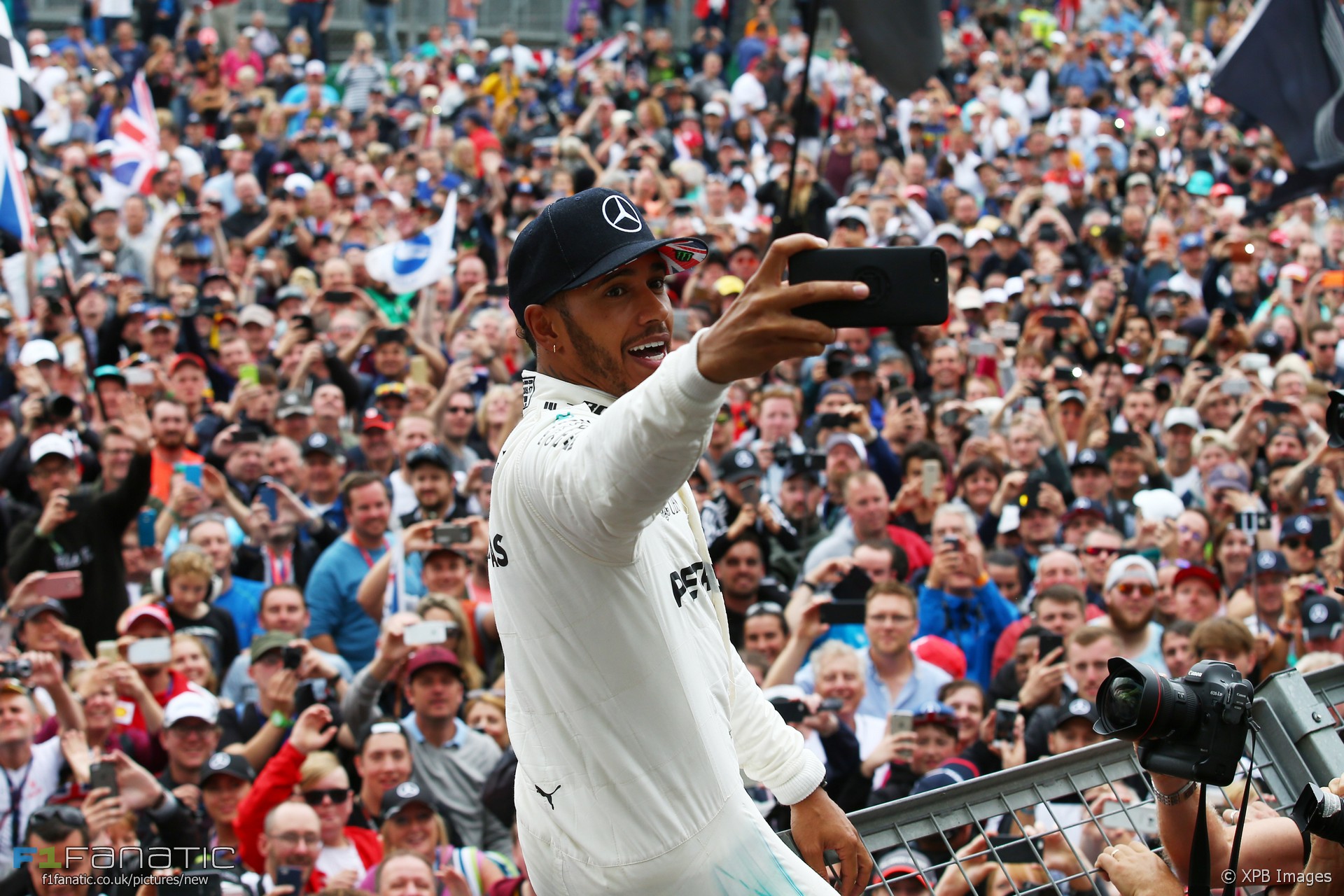 Lewis Hamilton was voted Driver of the Weekend following his utter domination of the British Grand Prix at Silverstone.

The Mercedes driver took pole position and led all the way as he claimed his fifth win at home. He added fastest lap for good measure, breaking the Silverstone lap record as he did so.

Hamilton has won Driver of the Weekend more times than anyone else since the poll began in 2011, and this is his second win this year.

With his 67th career pole position, Hamilton is now one away from matching Michael Schumacher’s all-time record. It was a peach of a lap too, over half a second quicker than anyone else.

He put the race beyond doubt early on as he set a pace so hot the Ferraris wrecked their tyres trying to keep up. He had 14 seconds in hand over team mate Valtteri Bottas at the flag, but had clearly been managing his pace for much of the event to keep his engine and tyres in good shape.

The reason Hamilton deserves the Driver of the Weekend is the same reason Usain Bolt deserves the gold medal and Roger Federer his eighth Wimbledon. It was an absolutely glorious display of excellence all weekend long.
Michael (@Freelittlebirds)

I had to vote for Hamilton. He had no rivals this race. His win was never in danger. He controlled this so beautifully. Absolutely perfectly executed race. No flaws this weekend. As a Ferrari fan, I can only applaud him.
Christopher (@Chrischrill)

Hamilton, by some distance. Absolute monster this weekend, totally untouchable in qualifying, in the race, grand slam, equalled Jim Clark’s record, what a weekend for him.
@Rantingmrp

Many of you voiced approval of Nico Hulkenberg’s weekend. But for a late engine problem he might have been able to hold off Daniel Ricciard for fifth.

There was plenty of praise for Ricciardo’s comeback drive as well, and Valtteri Bottas picked up a chunk of votes after rising to finish second.

Absolutely awesome well controlled race. Could easily be in the place of Hamilton and replicate what Hamilton did. It’s very easy when you have the fastest to perform so well but when you have an average car at best and drag it to sixth and ahead of the rest of the field by 30+ secs.
Yes (@Come-on-kubica)

Hulkenberg was quick in practice, quick in the changeable conditions in qualifying and then backed it up with a sixth place finish in the race, although he didn’t seem to receive much airtime during the TV coverage, given the circumstances this result was best he could have realistically achieved.
@PJA

Ricciardo started at the back and finished right behind his team mate: great overtakes, great drive.
@Jeffreyj

Plenty more praise for Hamilton – and quite a lot of criticism for Daniil Kvyat. Curiously, there didn’t seem to be as many comments about Nico Hulkenberg’s drive.

Frankly I was appalled today that none of the F1 drivers even fought for their position except @Max33Verstappen. What did they sign up for?

Also congrats to Valtteri! What a skill and what a car! #BritishGP

How unlucky for #Seb5 and how annoying to see another Hamilton win. #F1

Wow. I'm so glad that Kimi still got to be on the podium. #f1 #SilverstoneGP

Just watched the F1, what a drive and bit of good fortune for Lewis! Season on! #BritishGrandPrix

Back on the #BritishGP subject I think Kvyat really needs to calm down looking at the incidents he has had so far this year. #F1

Great win for @LewisHamilton #britishGP. But got2feel sorry for Kimi yet again. When will his luck change?

Still so happy with the F1 result today, loved seeing Vettel fall down the pack! Great drives from Ricciardo and Bottas #BritishGP

#Raikkonen is not happy with that, damn. Right at the end though bit harsh #F1

Kvyat has been added to the #F1 official list of obstacles drivers may face on the track. @3Legs4Wheels

Lewis we have established you the best ever f1 driver. You like your tattoos find a place on your body and have all your achievements inked

Driver of the day for me was @ValtteriBottas amazing pace and low wear on the softs. Well deserved. Unfortunate for Ferrari but that's F1

Valterri Bottas making a strong case for himself as the stand out driver from the 1st half of this season. Adjusted to Merc, on form too #F1

I gotta admit I feel bad for Palmer today. #BritishGP

I don't so much want Hamilton to win the F1 championship, as I want Vettel not to. So supporting Hamilton for the same reason I voted Labour

Daniil Kvyat should not be an F1 driver. #Formula1 #BritishGP

Kvyat is a terrible #F1 driver. I don't know how he has a ride with any team.

Love. Vettel dishes it out,but doesn't like it returned#F1#ferrari#verstapen

#BritishGP #F1 @kvyatofficial only slightly delusional about that incident. Presuming he's seen the onboard replays by now. #TorroRosso

#mclarenhonda are an absolute disgrace – poor Alonso how the hell is he still there? Honda is a terrible company with Wack cars. #endof #F1

Lewis Hamilton love him or hate him ..man at te top of his game at present in F1

Watching the #BritishGP. This now confirms that Kvyat will not be driving an F1 car anymore.

Absolutely gutted for Ferrari, but great to see @WilliamsRacing in the points. #BritishGP

I think it's game over for this year's F1 championship. Hamilton/Mercedes are going to be champions. Ferrari aren't even improving anymore.

Can we please get Kvyat out of F1. Races like an Indy Lights rookie

Hamilton peerless all weekend. Bottas with a stellar recovery drive. Vettel and Ferrari searching for answers. 1 point gap at the top #F1

Lewis had 2 Grand Slams before 2017, now has 5. When his car's on song this year, it's unstoppable. #BritishGP

16 comments on “Dominant Hamilton wins Driver of the Weekend”