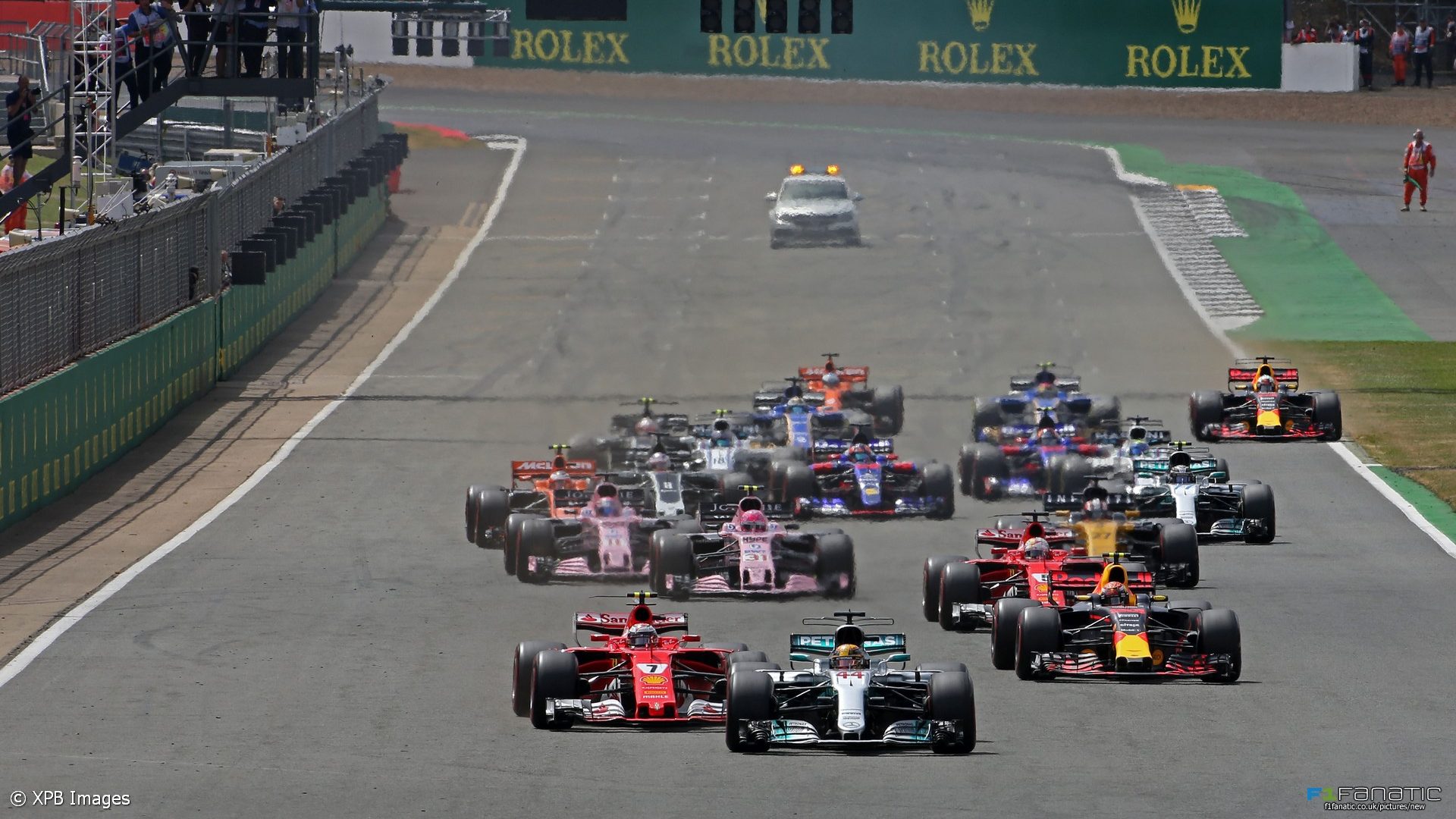 But F1 Fanatic readers rated it 6.6 out of ten, making this one of the less popular races at Silverstone over the last ten years. Here’s why.

We got some proper ding dong wheel to wheel battles, interesting strategies in play, and late race drama. No battle for the lead is disappointing but still solid.
Philip (@Philipgb)

A lively start and a good battle between Verstappen and Vettel. Vettel and Bottas was interesting for a while and then the excitement of the last two laps. Would have been better with a rain shower or two.

Ricciardo and Bottas both drove well coming through the field. I thought the win for Hamilton was a foregone conclusion though after the safety car restart.
Phil Norman (@Phil-f1-21)

Some typically tasty action between Vettel and Verstappen, and Bottas kept it interesting with his alternate strategy. Dramatic ending with both Ferrari’s suffering tyre failures, looks like a set-up related thing to me. Good race in my view.
James Brickles (@Brickles)

Ferrari’s troubles left some of you feeling deflated (sorry):

I think it was not much different from Austria to be honest. Just a little bit more action, like the fight of Verstappen and Vettel. But other than that, all other fights were heavily unequal. I don’t care about Bottas overtaking Haas mid-straight. And I can’t be bothered about Ricciardo driving by cars as if they are standing still. I want to see real fights, and other than Verstappen/Vettel, I haven’t seen any.

Then seeing a race result end due to car failure, tyre failure, whatever, I absolutely do not enjoy. It leaves a bad taste, especially when it happens in the final laps. Like Le Mans last year. I enjoyed the beginning of this season so much, with real fights between Mercedes and Ferrari. Fights for the win. That’s what I want to see. But yet again, Ferrari shows they are not competitive when it comes to in-season car development.
@Spafrancorchamps

Others felt the inevitability of the pit stops detracted from the action:

this race was looking good early on and it was purely down to pit stops that ruined this race as it killed the great on track fighting we were seeing beforehand and stung the field out which led to less racing from then on. same thing happens in IndyCar, good racing which green flag pit cycles always ruin.
RogerAyles

However Max Verstappen’s first finish in four races was good news for some:

Now I really noticed how we dearly missed Verstappen the last races. Adding some needed taste to the race.
Sethje (@Seth-space)

Those who attended the race found more to enjoy about it:

I don't have many things I enjoy so much, but #F1 is definitely one of those

That. Race. Was. Superb. #F1 #SilverstoneGP

The only way the #BritishGP could have gone worse for me was if someone got hurt. #F1 #fb

Kids made own way to F1 so excited, but came back in shock & nearly in tears after hearing anger and hostility aimed at Vettel.Feel for them

Silverstone showed its class as one of the finest GP circuits today. Now desperately need BRDC & Liberty to hammer out a deal post 2019 #F1

"We all need to pull together and make sure SilverstoneUK stays!"

There just has to be a #BritishGP next season, fantastic race.

Finally caught the end of the F1 today, what a finish with the tyres, loving this seasons racing

F1 race was a bit boring today, the problems with the game Ferrari tyres in the last laps were the only excitement

Ferrari has been ever more on the backfoot vs Merc. I don't think we're in for an as thrilling 2nd half of the season as we'd hope #F1

Well THAT was an intense finish!
Sometimes it's tough being a Ferrari fan.#BritishGP

Wow! The last 2 laps of the #BritishGP unravelled for Ferrari. Flat tires for both cars – unbelievable.

Just got to watching the #BritishGP, man what a tire nightmare for Ferrari =(

Just watched #BritishGP on @F1onNBCSports. Yes, HAM won, but really, he was the LEAST interesting story abt that race. Crazy ending. #F1

Just finished watching the #BritishGP. Crazy finish. Second half of season should be interesting. #F1

Moment of the race for me: Vettel vs @Max33Verstappen. Multiple WDC vs future WDC, hard but fair racing. #F1 #BritishGP

Remind me not to watch F1 again, god it is boring. Club level racing is in a different league for entertainment and excitement.

The #BritishGP was actually lit. Congrats to Hamilton. But Ferrari's strategy ruined the race for Vettel. Poor call today.

Well, who could've seen those tyre dramas all happening within 2 laps?! Almost as good as it could've been for @MercedesAMGF1 #BritishGP #F1

What a crazy F1 finish. Wow

We are halfway through the season and no one has won back to back races…incredible! #BritishGP

Just finished watching the @F1 Silverstone race (recorded for us USA west coasters). Wow! What a race. Ferrari had some crazy luck.

Just caught up with the race and bloody hell that ending was thrilling, I love Silverstone, never fails to disappoint #BritishGP

#BritishGP was Awesome! Good racing by Hamilton he dominated the whole race! #Ferrari had a couple issues. Hopefully they'll bounce back!

The race was very spectacular. What happened at the end.. was awesome. I have a little heart attack did not happen. #BritishGP #F1

You know a #F1 race is exciting when they cut away for 5 minutes to cover last year’s race.#SilverstoneGP #Parade

What a stunning #BritishGP today, good work by everyone at both Mercedes factories for giving Lewis and Bottas podium-worthy cars!

What a day at Silverstone, one of the best weekends of my life. #BritishGP

Said it before but 2017 is easily the best season since 2012, for me. So pleasing the new rules have worked more often than not. #F1

What a great weekend it has been #britishgp #formula1 #forceindia, btw Ali Thomas we are getting ready for a different country next year.

Awesome day at @SilverstoneUK for the @F1 today!