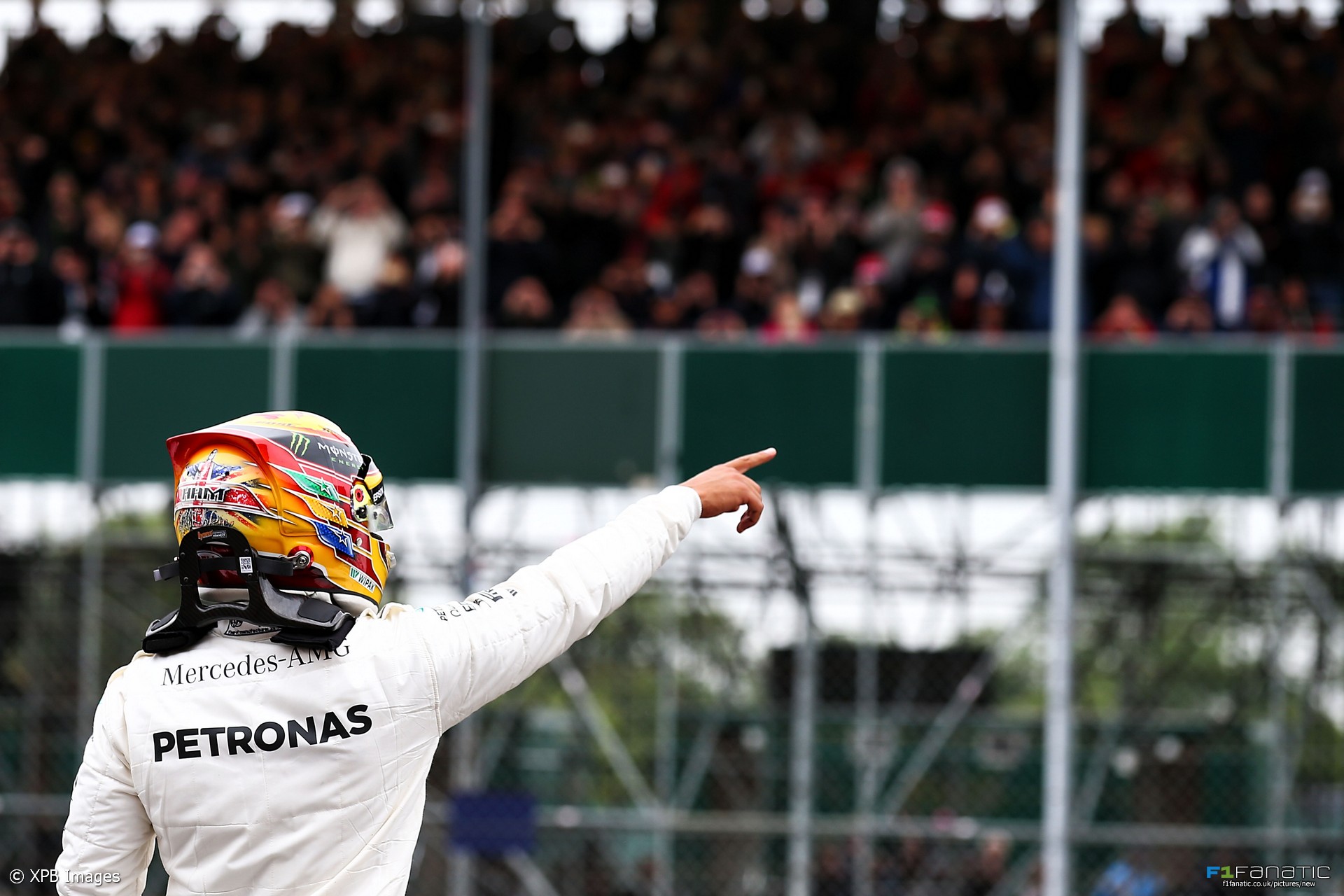 Lewis Hamilton took pole position for the British Grand Prix ahead of Kimi Raikkonen, but remains under investigation for impeding Romain Grosjean.

Hamilton produced a remarkable 1’26.600 to take pole ahead of the two Ferraris of Kimi Raikkonen and Sebastian Vettel, but after appearing to hold up Romain Grosjean’s Haas in Q3, the result remains provisional.

With almost perfect timing, the rain began to fall just ten minutes before the start of the opening qualifying session.

Teams were split between the Intermediate wet tyres and the Super Soft dry compound, but despite any obvious standing water the drivers on dry tyres were quick to switch over for the green-marked Intermediates.

In the initial rush to set an early lap time, Carlos Sainz spun his Toro Rosso at Copse, while Kimi Raikkonen almost lost control of his Ferrari entering the Vale.

Daniel Ricciardo set the fastest initial lap time in the Red Bull, but was suddely forced to pull off the circuit at Woodcote with a suspected turbo failure, bringing out the red flags and ending Ricciardo’s session.

The track was still firmly in Intermediate territory as the session resumed, but began to dry out as drivers continued to improve their times.

With Fernando Alonso outside of the 107% time with time ticking down, McLaren opted to gamble on Super Soft dry tyres. Alonso crossed the line just a few tenths of a second before the chequered flag flew and put in a brave lap to go fastest of all.

The Silverstone circuit was considerably drier as the second qualifying session began, with all drivers choosing to switch to dry compound tyres.

Valtteri Bottas was the only of the 15 remaining drivers to choose the Soft compound and used them to good effect to go second quickest behind team mate Hamilton in the early laps.

Despite complaining about being held up by Sergio Perez, Sebastian Vettel produced a 1’28.978 to go fastest of all, before Hamilton delivered an impressive 1’27.893 to set what would be the fastest time of the session.

As the chequered flag loomed, Jolyon Palmer put in a good time to go into the top ten, but Sergio Perez and Romain Grosjean both improved at the death to frustrate the Renault driver to an 11th place start.

Stoffel Vandoorne squeezed through in tenth to only his second Q3 appearance of the season, while Daniil Kvyat, Alonso, Sainz and Felipe Massa were the unfortunate five eliminated from further participation.

The fight for pole position looked like it would be a fight between Mercedes and Ferrari. Mercedes were the first to lay down a marker, with Lewis Hamilton putting in a 1’27.231 to go quickest from team mate Valtteri Bottas.

Then it was the turn of the Ferraris, with Vettel’s first effort giving him a provisional second place, just under two tenths from Hamilton, while Kimi Raikkonen posted the fourth quickest time.

Romain Grosjean was quick to voice his frustrations at Hamilton, after he felt the Mercedes held him up at the end of one of the Haas driver’s laps. The stewards confirmed that the incident was under investigation.

All drivers took to the track in the final two minutes for the final shoot out for pole. Bottas was the first man to cross the line, but locked up slightly into Village, costing him time.

Bottas improved to second, but was soon pipped by Raikkonen’s Ferrari. Lewis Hamilton then produced a 1’26.600 to take pole position, with Vettel taking third behind his team mate.

Valtteri Bottas will line up ninth on the grid after qualifying fourth. Max Verstappen and Nico Hulkenberg will start ahead of the two Force Indias of Sergio Perez and Esteban Ocon.

82 comments on “Hamilton on pole but under investigation at Silverstone”