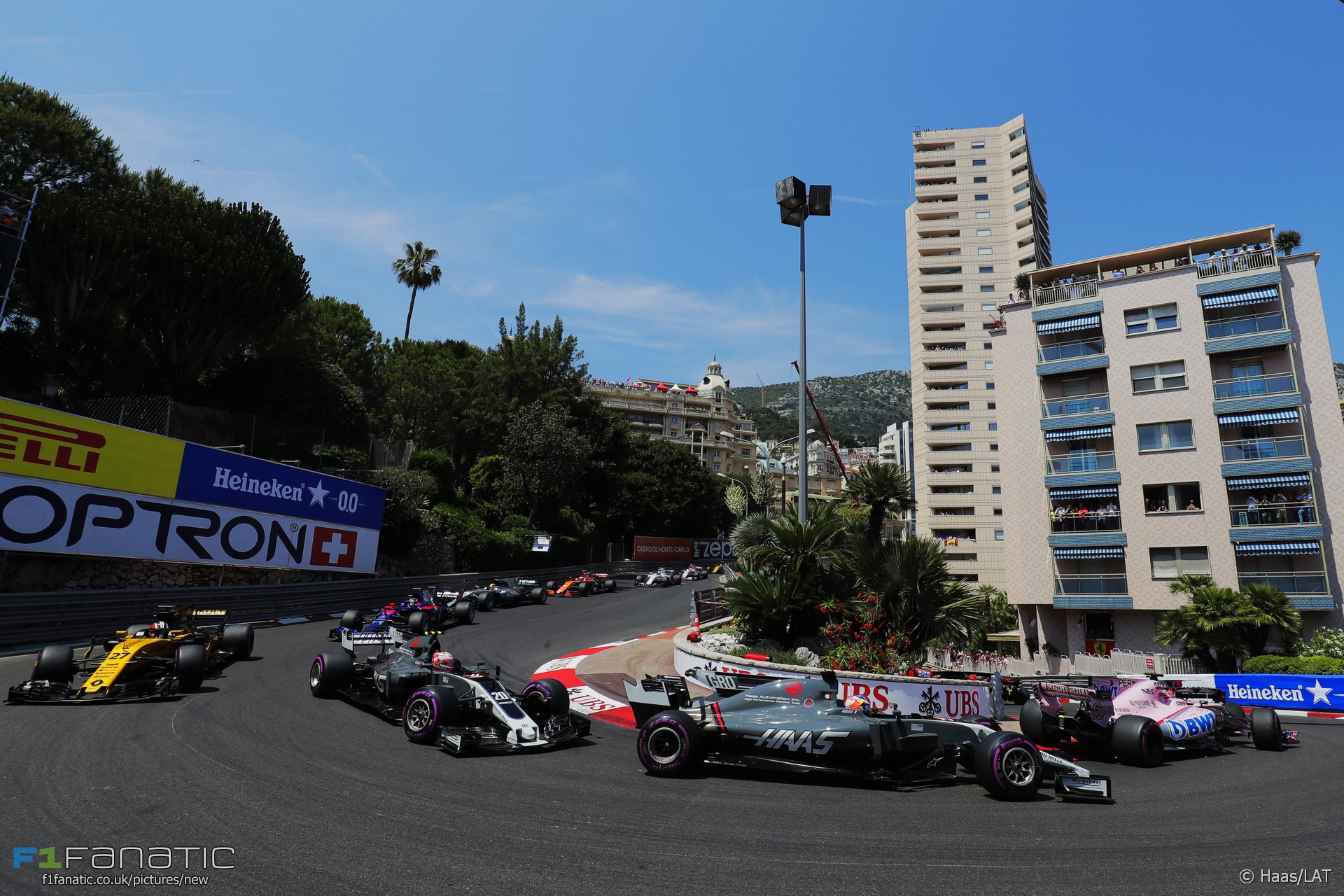 The Monaco Grand Prix received an average rating of less than five out of ten this year – the lowest the race has been given since F1 Fanatic began Rate the Race in 2008.

A largely processional race saw Sebastian Vettel take victory after jumping ahead of team mate Kimi Raikkonen in the pits. The change of positions left many wondering whether Ferrari was already favouring the driver who is in the strongest position in the points standings.

Here’s what you had to say about the race.

The Monaco GP should be scrapped – it is boring and the cars are too big for the track. No one ever overtakes because it is simply impossible. The only time drivers change positions is when a pit stop takes place or someone goes out of the race. Boring.

The only reason the race is held in Monaco is for the rich people. It’s more of a chance to show off how wealthy you are than the actual race.
Steve

Just about nothing happened in this race. Even the outcome of the pit stops was quite obvious except for the Bottas and Verstappen thing. I did not even see any tries with a reasonable chance of a take over.
Ronald (@Mosquito)

Excellent racing, exciting passing moves, wheel to wheel action, some flashy crashes and a last lap fight for the victory! I give this race a ten.

Oh right, I was watching the Indianapolis 500… IndyCar showed this weekend that at least one oval race can be more interesting then the Monaco bore-fest that has no reason to keep existing.
Ed Pimentel

However the track has its defenders:

Yes, Monaco doesn’t generate overtaking (when has it ever), but it is a unique challenge – there is nowhere else like it.
Officer Honkengoose

I knew most people would call the race boring but I enjoyed it. Monaco has to be taken with a grain of salt. Watching the cars go round this track in itself is pretty awesome and we got lots of beautiful slow motion shots of the cars brushing the barriers on the limit. The pit stops were very exciting and resulted in quite a few position changes although It would have been nice to see some passing on the track. Loved the radio exchange with Button. You could tell he had no idea Alonso was going to call.
@BrawnGP

I love F1 because there’s variety. There’s a bit of old school and a bit of the new. Monaco is never going to be a track for lots of overtaking; and lots of overtaking is not all that F1 is about. Monaco Grand Prix is older than F1 itself, and deserves its place on the calendar, where drivers need to be inch perfect and the barriers define the edge of the track.

I know this is rate the race, but to have the top three split by less than 0.05 seconds in qualifying is incredible; Vandoorne pushing too hard and stuffing it in the barriers in qualifying, that’s the commitment I want to see, because its the drivers making the difference over a lap, not just the machinery. And it was good to see drivers actually push all race in Monaco, something we haven’t seen in years like in 2013 when they were lapping five seconds a lap slower than they could have done. There was a sprinkling of overtaking attempts, some crashes, some strategy played out and this Monaco Grand Prix compared to the last few years was great.
Kevin Wong (@Fongu)

And as happens every year the unique Monaco television director earned a special mention:

It was mentioned in commentary that the TV footage is controlled by a local director and I don’t think they did that good a job, for example in qualifying there were a few times when they focused on a warm up lap rather than a fast lap. Also in my opinion for the TV viewers the area where Monaco can be the best is the on board footage, with how close they are to the barriers watching on board footage around Monaco is normally the highlight of the weekend but there was hardly any during the race.
@PJA

I’ve think they should do something different at Monaco, as well as the race have a time trial or something. They could make a team time trial even. One guy does a standing start and a lap, as they cross the line the teammate starts from the pit lane and does a lap. Fastest wins, constructors points only.

Do you think it’s time for the Monaco Grand Prix to be run to a different format? Or dropped entirely?

Or should it be left as it is? Have your say in the comments.

The reaction on Twitter was, if anything, even more negative.

Team order or not F1 race is getting boring.

A race isn't a race if you can't overtake. Waste of everyone's time #MonacoGP

Any F1 pundits who agree with or accept what Ferrari did, is what's the problem with F1. Fake racing. Wasted 78 laps. Robbed

The Monaco F1 Grand Prix has got to be one of the most boring races to watch in motorsport.

The Monaco GP summed up everything that is wrong with F1. Manufactured results. I love Ferrari but that was a poor show. #skyf1

How much do I love the Monaco Grand Prix? So much. The hairpin, the tunnel, the champagne. ❤️ Ferrari! #MonacoGP #F1

Don't get the #MonacoGP for a fan . No overtaking no excitement no racing #pointless

Most exciting part of the #MonacoGP … having the @WilliamsRacing crew stand on my toe as they were packing up! Oops!

The #F1 #MonacoGrandPrix was so boring, they should have just handed out the points after qualifying as very little overtaking

People who sit & watch the #MonacoGP and moan about the lack of overtaking, it's not all about that. In my Top 3 races of the year. #F1 🙄🙄🙄

Just watched #MonacoGrandPrix so dull. Overtaking is almost none existent. The sooner #F1 take it off the calendar the better.

The #MonacoGP is so boring. Used to have some allure but now its just a 2 hour parade

The most boring race I have ever had to endure!!! Two overtake attempts in the whole race end in two crashes! #boringasfolk #MonacoGP

F1 has outgrown Monaco these last few years, imo. Time to consign it to classic cars only.

#MonacoGP whats the point of racing on a circuit where overtaking is so rare. yawn yawn yawn f1 so boring

That was the most boring F1 race ever #F1

#MonacoGP should be removed from Calendar. A complete procession. Nb. to self never watch again.

Please stop the #F1 at #Monaco. It is not a race but who is best at timing to go for a pits stop….

Honestly, I think you'd see more variety, action and overtaking standing on a bridge over a motorway than watching an #F1 Grand Prix.

What a load of corrupt boring old tosh F1 is

Monaco GP is a waste of time. If they want an exhibition 'race' then use that. F1 outgrew the street circuit along time ago.

For me the Monaco grand prix needs to be axed from the f1 calender. A whole race with 0 overtakes on track. #boring#gottogo @SkySportsF1

Sorry @F1, that wasn't a race – it was a commercial parade with a result decided in the pit lane rather than the track. Sad #MonacoGP

Watching a re-run of @F1 – Safety car out – "no overtaking". #ironic #pointless #yawn

And also the f1 was extremely boring, just have to leave that comment here…

Hate to say it but it's time for the #MonacoGP to go 😱it's just not an exciting race to watch. Still a great 1-2 for #ferrari ❤️

#F1 the Monaco GP seems to me to be more of a very showy PR exercise. Is 75 years enough? Not one overtake. #dulldulldull

Drive round for 35 laps, pit, drive round behind safety car, drive car to flag. That was without doubt the most boring f1 race ive ever seen

As much as I love the #MonacoGP, the race ends (bar team orders / a down pour) Saturday eve. Is it possible to change the layout? #AskCrofty

I only watched up until halfway through the #MonacoGP and there had been no passes on track. Should this race even be on the calendar?

Don't know what to think of that race. Bit meh, wish there was more racing instead of conserving tyres. #MonacoGP

What a championship this @F1 season is becoming. Congratulations to #SebastianVettel for winning #MonacoGrandPrix

No wonder F1 drivers around Monaco just follow each other the whole race. If they do try 2 overtake there's a crash. Waste of time & boring!

#F1 not a single overtake?! Was that really a race? #F1 #MonacoGP #MonacoGrandPrix #yawn

That was probably the dullest #MonacoGP I can remember. The whole race decided on pit strategy & no real overtaking to be seen. #F1 #dull

Race was boring! nice move from #redbull. It would have been nice to see #kimi win BUT if 2nd driver, it had to be done #skyf1 #MonacoGP

F1 have to do something proactive about the snoozeathon that is #MonacoGP. Not good that action dependent only on pit stops or safety cars.

How dull was that? #MonacoGP #C4F1

#MonacoGP worst. track. ever. How are you supposed to overtake in this corner laden narrow track?

#MonacoGP is a bore fest. Needs more drama, overtaking and wheel to wheel racing. Not follow the leader and pit stop racing @SkyF1GP