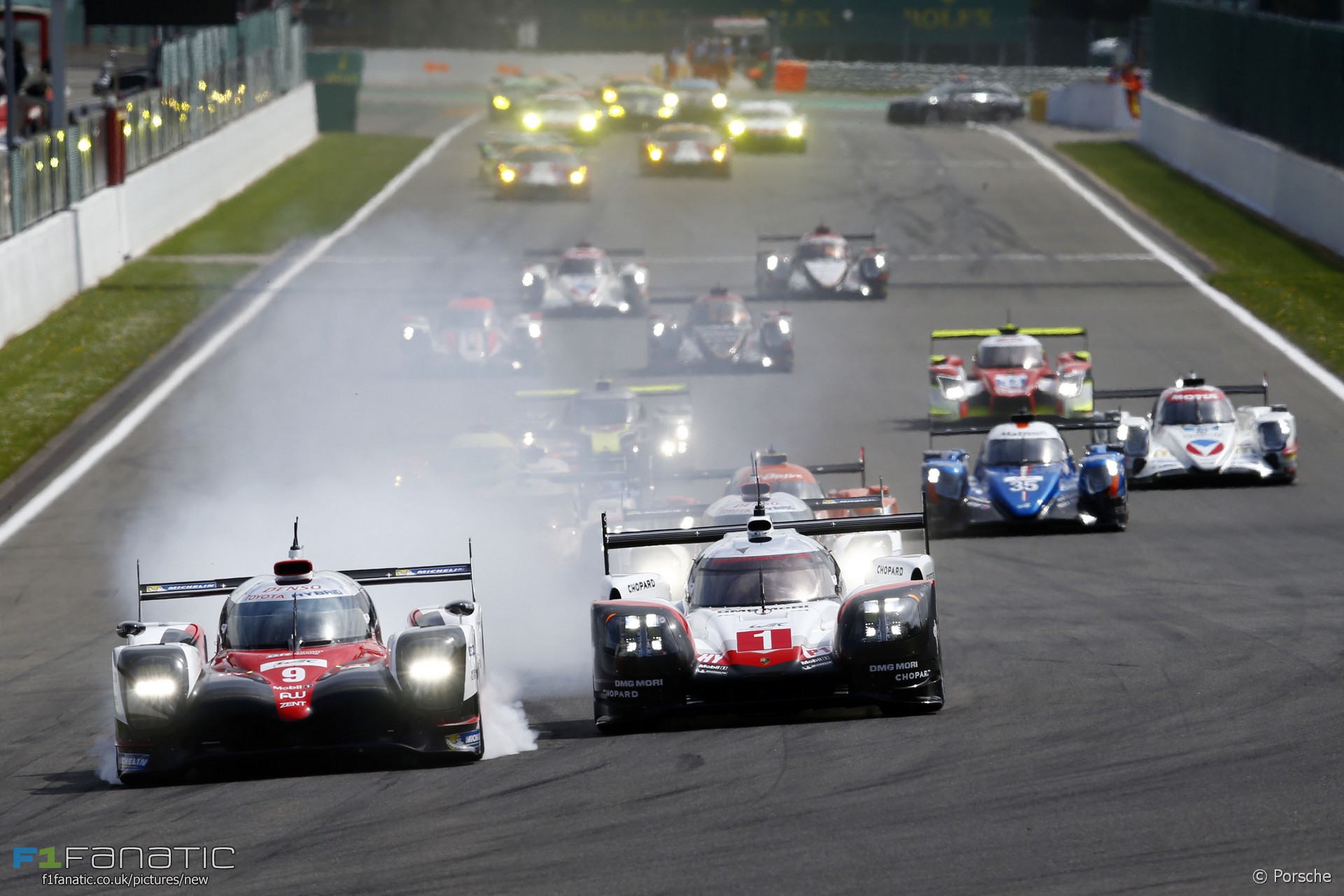 The World Endurance Championship’s dress rehearsal for the Le Mans 24 Hours at Spa produced a close and exciting finish.

Toyota took their first one-two since 2014 in the Spa Six Hours, though it was far from easy. The number eight car of Sebastien Buemi, Kazuki Nakajima and Anthony Davidson took the win by only two seconds ahead of the sister car of Kamui Kobayashi and Mike Conway, after the eventual winner lost 45 seconds after pitting under green before a full course yellow gave the eight car the advantage.

The Porsche challenge was initially strong, with pole position going to the 1 car with Andre Lotterer and Neel Jani driving, but after the first hour they began to struggle, with the 2 car with Brendon Hartley at the wheel hitting the 36 LMP2 Alpine driven by the reigning Porsche LMP1 World Champion Romain Dumas at the bus stop chicane. The third of the Toyotas finished in a distant fifth, while ByKolles put together an impressive run to finish ahead of the entire LMP2 field.

The junior prototype category was won by G-Drive Racing’s number 26 entry with Alex Lynn, Pierre Thiriet and Roman Rusinov at the wheel, while the 31 Vaillante Rebellion and 38 Jackie Chan DC cars completed the LMP2 podium. In the GTE ranks, AF Corse dominated, completing a one-two finish

The 71 car took victory in the hands of Sam Bird and Davide Rigon after a fierce battle with the 51 car driven by James Calado and Alessandro Pier Guidi. In GTE Am, Pedro Lamy won a record-breaking 15th class win for Aston Martin Racing alongside Paul Dalla Lana and Mathias Lauda.

On the support bill for the World Endurance Championship at Spa, Alfonso Celis took a lights-to-flag win in race one – his first victory in the championship. From second, Pietro Fittipaldi plummeted to last after an awful start, meaning Rene Binder moved up to second with Roy Nissany in close proximity in third. Nissany’s pressure meant he found a way past Binder on lap three, with Egor Orudzhev also overtaking the Austrian. Nissany closed on Celis at the end but the Force India junior managed to hold off the challenge to take the win.

The second race saw Matevos Isaakyan win with a perfectly-timed pit stop. Fittipaldi started from pole and despite falling to third with a mediocre start he manoeuvred past team mate Binder for the lead at Les Combes. He was doomed not to win, however, as a slow tyre change dropped him back into the pack. He eventually finished sixth after passing Nelson Mason and Orudzhev. Isaakyan’s pit stop leapfrogged him from fourth to the lead, with Binder and Celis taking the final podium spots after a tough battle with Nissany and Menchaca.

Matt Neal took pole position for the opening race and headed off a challenge from Honda team mate Gordon Shedden at the start to take victory. Jack Goff’s privateer Honda took third place, while Tom Ingram continued his strong start to the season in fourth. Adam Morgan finished in fifth after moving ahead of Rob Austin early on, who gradually fell down the order, eventually falling down to ninth. Andrew Jordan had a difficult first race, spinning at the complex and falling to 28th position. There were only two retirements, with Jake Hill and Josh Cook coming together and ending up in the barriers. This race gave Matt Neal his 60th victory in the BTCC, moving him into joint second on the all-time list.

A shortened race two, interrupted by two red flags, was won by Rob Collard. Neal led the original start from pole ahead of Shedden and Goff, but Daniel Lloyd crashed heavily at the super-quick Church corner. While Lloyd was unhurt, the car and barrier were heavily damaged, forcing an hour-long stoppage. At the second start, Collard moved up to third from sixth before passing Shedden for second. Neal pulled into the pits from the lead at the end of the first lap with power steering issues, promoting Collard to first. On lap six of the rescheduled ten, Martin Depper made an error at Village, snaking across the road and crashing heavily into the tyre barriers, destroying his Ford Focus. The red flags flew again and the result was declared, Collard winning ahead of Shedden, Ingram, Goff, Austin and Colin Turkington.

Turkington drew pole for race three and won comfortably, giving BMW their 100th BTCC victory. While he ran away at the front, Goff, Austin and Ingram fought hard for the remaining podium places. Austin started the race in second but fell away, eventually falling to fifth behind Shedden, while Ingram made his way up to second place, with Goff took the final podium position.

Lucas Auer won the first race of 2017 from pole position and there was plenty of action behind him. Jamie Green spun Maro Engel early on, pushing the German right down the order and earning himself a drive-through penalty. The most impressive overtaking performance was from Mattias Ekstrom, who rose from 17th position to finish fifth. The different brands were also evenly matched, with BMW’s Timo Glock and Audi’s Mike Rockenfeller joining Mercedes’s Auer on the podium.

While race one was held in perfect weather, changeable conditions made tyre strategy crucial in race two. Glock took pole position in the morning’s qualifying session and led into the first corner, followed by Green and Rockenfeller, who jumped the slow starting Rene Rast. Robert Wickens, Nico Muller and Loic Duval all came together in the first corner, leaving Wickens stuck in the gravel trap.

That meant the first appearance of the Safety Car and new, NASCAR-style double-file restarts. Second-placed Green was ahead of the leader Glock when the red lights went off, meaning he received another penalty, while Rene Rast was spun by Maxime Martin. Green retained the lead, and quickly pulled out a margin far greater than what was required to negate his penalty. On lap 18, the rain became very heavy, and in the jumbled order that resulted, Jamie Green kept the lead even after his stop in the penalty box, and took victory ahead of Gary Paffett and Marco Wittmann, meaning all three manufacturers were again represented on the podium.

Sharing the billing with the DTM at the Hockenheimring, Mattias Ekstrom continued his 100% record in WRX this year with another win, but only after recovering from ninth in the qualifying standings after day one.

In semi-final one were the two PSRX Volkswagens of Johan Kristoffersson and Petter Solberg, Sebastien Loeb and Kevin Hansen for Peugeot, and Kevin Eriksson and Reinis Nitiss as the sole OMSE Fiesta and Audi respectively. Kristoffersson, Solberg and Loeb advanced to the final easily in the damp conditions.

Semi-final two saw the two Red Bull-backed Audis of Ekstrom and Topi Heikkinen joined by Timmy Hansen, Timo Scheider and Ken Block – the latter the only works Ford in the semis after Andreas Bakkerud had a tough weekend. Ekstrom, Hansen and Heikkinen advanced in the first three positions, meaning the two championship leaders, Ekstrom and Kristoffersson, held the front row for the final. After a frantic final heat, Ekstrom took victory ahead of Kristoffersson, Hansen, Solberg, Loeb and Heikkinen.

Race 4: Circuit of the Americas

The Austin round of the IMSA Sportscar Championship was won in dominant fashion by Wayne Taylor Racing Cadillac with brothers Ricky and Jordan at the wheel, the fourth straight victory for the team. Despite three full course cautions including one in the final ten minutes, the brothers were always in total control, comfortably ahead of their rivals. The top Nissan pair hit trouble: Johannes van Overbeek collided with a GTD car early on and Ryan Dalziel’s car catching fire, causing the final caution of the race. Dane Cameron and Eric Curran finished a distant second, while Joao Barbosa and Christian Fittipaldi took the final podium spot, completing a Cadillac clean sweep.

In GTLM, half of the field were taken out of contention in turn 1 when the 67 Ford hit the Risi Ferrari of Giancarlo Fisichella, pitching him into a spin in front of a Corvette, and the 912 Porsche also sustained damage. For the Ferrari, it was the second first-lap retirement in two races.

Corvette took victory with Jan Magnussen and Antonio Garcia, ahead of the Bill Auberlen/Alexander Sims BMW, with the German marque also completing the podium with John Edwards and Martin Tomczyk. GTD arguably saw the best racing of the day, with the top four separated by only ten seconds for most of the race. The Riley Mercedes won in the hands of Jeroen Bleekemolen and Ben Keating, with Christian Nielsen and Alessandro Balzan second in a Ferrari, while Kenny Habul and Tristan Vautier finished third in class, also in a Mercedes.

Regular Weekend Racing Wrap writer @Bradley13 was at Thruxton for last weekend’s BTCC race. On Saturday evening the circuit was opened to allow fans , drivers, team members and marshals the opportunity to walk the track to raise money for Billy Monger, who suffered life-changing injuries in the previous round of the TOCA series at Donington Park.

The atmosphere was incredible and the event raised £7,499.97 to go towards the fundraiser for Billy, which is now more than three times its initial target. Thanks to @Mathers who wrote this weekend’s article while Bradley was away.

Dani Pedrosa won for Honda in the Moto GP round at Jerez. Valentino Rossi retained his points lead despite struggling to tenth, but has Maverick Vinales and Marc Marquez within four points of him after four races.

The F1 season continues with the Spanish Grand Prix next weekend. Formula Two will be supporting as will the first round of the new GP3 season. Here’s the rest of next weekend’s racing action: