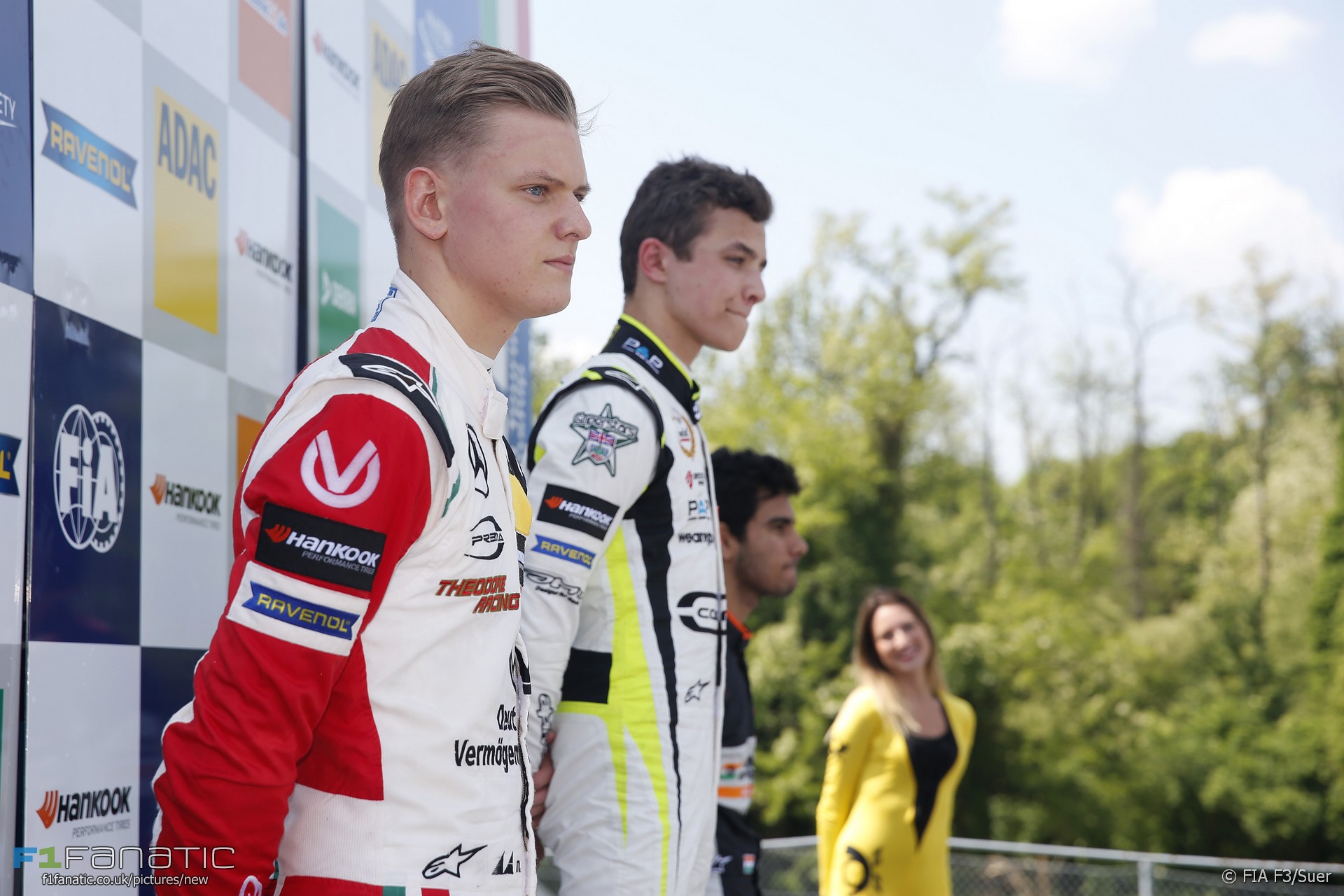 The World Rally Championship produced another thrilling event in 2017 as the series made its way South to Argentina, where a surprise maiden victory was denied on the final stage in an incredibly close finish.

Elsewhere the reigning IndyCar champion took his first victory on an oval and the Schumacher name returned to the podium in Formula Three for the first time in over two decades.

Force India junior Jehan Daruvala and McLaren apprentice Lando Norris shared the front row of the grid for the first race, but as at Silverstone Norris got away poorly again. He bounced back quickly, however, recovering to second before passing fellow rookie Daruvala for the win. Ferdinand Habsburg took the final podium position.

Continuing the trend from Silverstone, Joel Eriksson won race two. Norris took second after passing Mick Schumacher on the sixth lap. The Prema driver held on to take third, scoring the first F3 podium finish for a Schumacher since his uncle Ralf won the Macau Grand Prix in 1995.

Callum Ilott completed the Silverstone flashback by winning race three. Eriksson slipped to fourth from pole at the start with a poor getaway, allowing Ilott to surge into a lead he never lost. Norris once again proved feisty as he overtook Ferrari junior Guan Yu Zhou for second. Fourth for Eriksson preserved his lead in the championship but Norris is just one point behind.

Elfyn Evans held a surprise lead in Rally Argentina by 0.6 seconds heading into the final stage, but his maiden victory was snatched at the last possible moment by Thierry Neuville.

As his competitors fell by the wayside on Friday morning Evans kept his nose clean, taking full advantage of his DMACK tyres and low position in the running order to open up an early lead. Mads Ostberg impressed on his return by holding second. But Kris Meeke exited the rally in spectacular fashion, his Citroen rendered unrecognisable after the first of two sizeable accidents throughout the rally.

By the middle of Saturday Evans’ lead was up to over one minute, but a charge from Neuville in the afternoon – coupled with problems for Evans – saw the M-Sport driver’s advantage slashed to just 11 seconds heading on Sunday morning.

Further problems on next opening two stages saw Evans’ lead trimmed to just 0.6 seconds heading into the final ‘Power Stage’. Neuville set blistering pace, but a flying start by Evans seemed to put him on course for a breakthrough victory. It wasn’t to be, however: a brush with a bridge cost Evans valuable time, and Evans lost a rally he’d led from the start by a final margin of just 0.7 seconds.

Remarkably, reigning IndyCar Series champion Simon Pagenaud had never won a race on an oval. He put that right at Phoenix with his first win of the season, which catapulted himself into the championship lead.

Helio Castroneves led the field away but there was drama behind immediately as Mikhail Aleshin spun causing those further back to scatter, and inevitably collide. Five cars were eliminated from including pre-race championship leader Sebastien Bourdais.

Castroneves led the restart but was passed by Will Power in the pit stop. A crash by Takuma Sato at the second round of stops saw Pagenaud – who hadn’t pitted – inherit a comfortable lead. The reigning champion never looked back and won comfortable ahead of Power and JR Hildebrand, the latter making a successful return from injury.

The EuroFormula Open season started in Estoril, with Harrison Scott winning both races for the RP Motorsport team on his debut weekend in the championship. In race one, Scott took the win from pole position, but only after losing out to Nikita Troitskiy at the start. Pedro Cardoso and Daniil Pronenko collided, eliminating both from the race and bringing out the Safety Car.

After the cars were cleared and racing was resumed, Scott passed Troitskiy almost immediately on the straight, but the Russian hit back into turn one. While the two at the front battled, Ameya Vaidyanathan caught up, creating a three way fight for the lead. Soon after, Scott took the lead once more, with Vaidyanathan following him through as Troitskiy struggled to keep pace.

Troitskiy fell into the clutches of the midfield, and was eventually forced to retire when he touched the rear tyre of Yan Leon Shlom and broke his front wing. At the front however, Scott won by 1.3 seconds ahead of Vaidyanathan, with Matheus Iorio, Jannes Fittje and Eliseo Martinez rounding out the top five.

Race two was more straightforward for Scott. From second on the grid, he took the lead into turn one and controlled the race to take a lights-to-flag victory. Troitskiy was pole sitter, but ended up 10 seconds behind Scott in second place by the chequered flag. The safety car was again deployed on lap one when Alex Karkosik spun at the first corner and blocked the track, and Pronenko again crashed at the start, hitting Lodovico Laurini.

After the restart, Scott pulled away from Troitskiy, who in turn pulled away from Shlom in third. Thiago Vivacqua took third from Shlom on lap nine, and the Russian’s day got worse when Fittje made contact, taking him out of the race. The final order behind Scott and Troitskiy was Vivacqua, Fittje, Devlin DeFrancesco and Simo Laaksonen, with the latter two swapping positions on the final lap of the race.

The Opening Race at Monza went the way of Tom Chilton’s SLR Citroen ahead of Rob Huff in the Munnich-run example of the same car. Tom Coronel was on pole position for this reverse-grid race after qualifying in 10th, but after stalling both on the formation lap and the actual start, he plummeted down the order before the field reached turn one.

This left Mehdi Bennani in the lead ahead of Chilton and Norbert Michelisz, who quickly dispatched the Englishman at the Rettifilio. Michelisz then set about catching Bennani, and an audacious move into the Parabolica on lap three was blocked by the Moroccan, with the two making contact, forcing both to retire. This meant Chilton inherited the lead, while Esteban Guerrieri moved up to second with Huff third. Huff passed Guerrieri down the pit straight on lap five for second, but despite catching up to within four tenths of Chilton, the 2012 champion couldn’t find a way past.

Thed Bjork won the Main Race from pole position ahead of Tiago Monteiro, but only after having to pass the Honda driver on lap two after losing the lead at the start. Bjork then started to pull away from the rest of the field until Chilton suffered a driveline issue and pulled to the side at Ascari, forcing the deployment of the safety car. After the restart, Bjork continued to draw clear, winning by two seconds ahead of Monteiro and Huff, while Nicky Catsburg and Nestor Girolami made it three Volvos in the top five.

Joey Logano won his first race of the season at Richmond, despite started at the back of the grid because of a transmission change.

The first stage was won by Matt Kenseth while Brad Keselowski took the second – also finishing runner-up overall to his Penske team mate Logano. The only major incident of note came late on when Jimmie Johnson ran high and pushed team mate Dale Earnhardt Jr. – who announced earlier this week he was to retire at the end of the season – into the wall.

Valtteri Bottas became a winner in Formula One with victory in the Russian Grand Prix. An impressive start saw him lead into turn one from third on the grid, and despite late pressure from Sebastian Vettel the new Mercedes recruit held on for his maiden victory, with Kimi Raikkonen completing the podium in third.