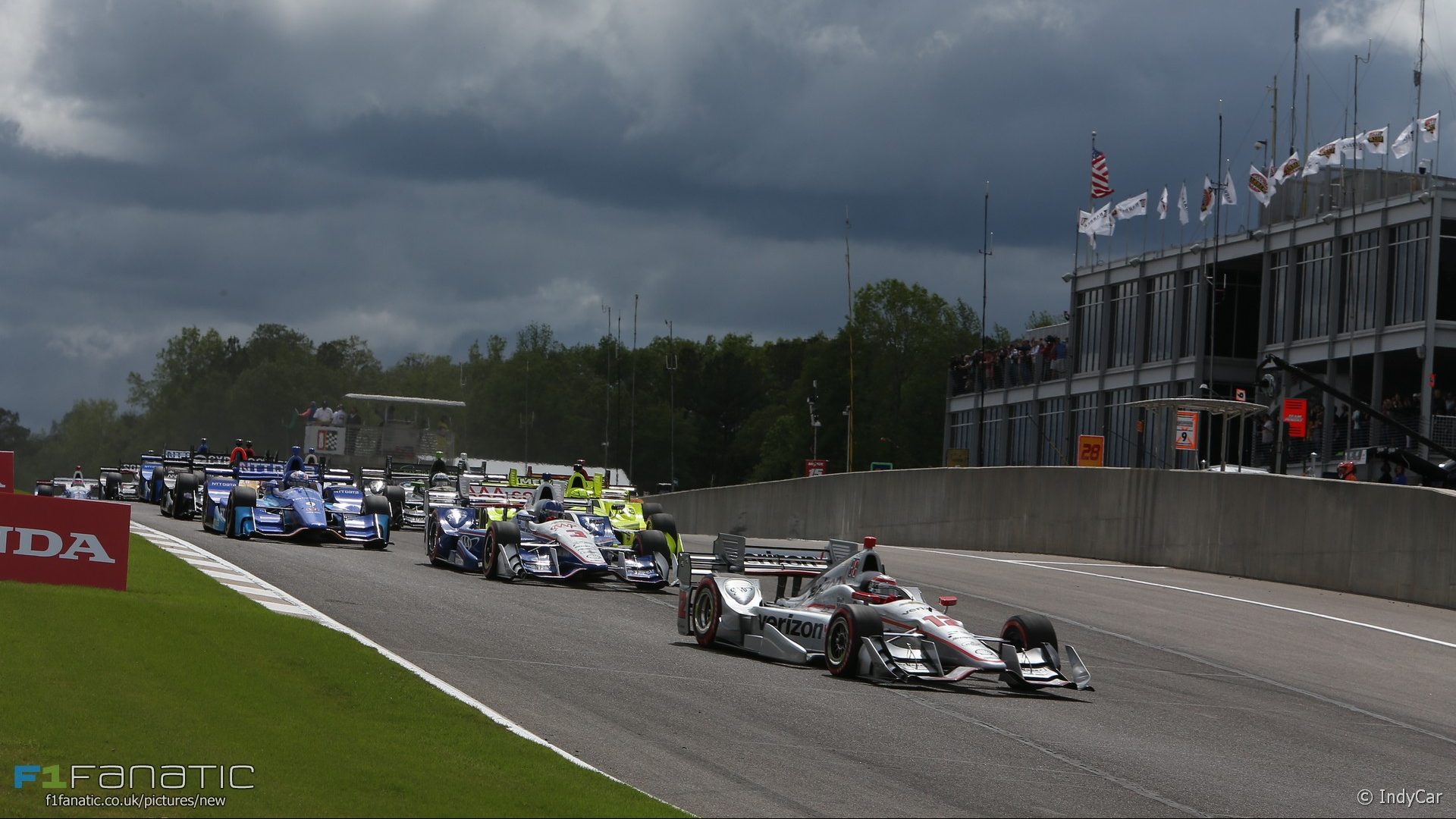 Fernando Alonso had his first look at an IndyCar race ahead of his Indianapolis 500 debut while Red Bull junior driver Pierre Gasly made his debut in Japan’s Super Formula championship.

Just what does Will Power have to do to get a win? His miserable streak of luck extended to a fifth race at Barber Motorsports Park. This time he led 60 laps before a left-rear tyre deflation sent him into the pits to an eventual finishing position of 14th.

Penske team mate Josef Newgarden profited and the team’s newest member became the first of their drivers to win a race this year. Newgarden was the only one of the quartet not to reach the ‘fast six’ in qualifying but an aggressive opening stint on the harder tyres plus some feisty passes at turn 16 moved him into position behind Power. The decisive moved proved to be a pass on Scott Dixon which reclaimed a place Newgarden had lost in the pits.

Alonso might have enjoyed what he saw in terms of the racing but it was a largely disappointing day for the Andretti squad he will drive for at Indianapolis. Ryan Hunter-Reay’s race never recovered following lap one contact with James Hinchcliffe which damaged his front wing. Technical trouble spoiled Marco Andretti’s race before it started. That left last year’s Indy 500 winner Alexander Rossi as the team’s highest finisher in fifth.

An uneventful race for points leader Sebastien Bourdais leaves the top five drivers in the standings covered by just 15 points after three races. Power languishes in 14th, which is even lower than he was at this stage last year having missed the season-opener. He’ll get his next chance to turn his luck around at Phoenix on Saturday.

Former Williams F1 driver Kazuki Nakajima won the first race of the season in Suzuka, having taken advantage of a safety car by pitting. From pole, Nakajima led away ahead of Naoki Yamamoto and Yuji Kunimoto. The majority of the field pitted in the first four laps to complete their compulsory pit stop, including Kunimoto, but Nakajima and Yamamoto stayed out.

This proved to be a masterstroke on lap 23 when Kazuya Oshima spun at Spoon curve and brought out the Safety Car. The lead pair pitted shortly after, and after the restart Nakajima pulled away to comfortably win for the first time since 2015. Yamamoto and Kunimoto completed the podium ahead of Hiroaki Ishiua, Andre Lotterer and Koudai Tsukakoshi.

Reigning GP2 champion and Red Bull junior driver Pierre Gasly impressed on his debut with a fine pass on a cold-tyred Kamui Kobayashi in the Esses. However Kobayashi later reversed the move and Gasly slipped to tenth at the flag with gearbox and brake problems.

Solberg’s final was undone with a puncture, also holding up Kristoffersson, while behind the Peugeots of Sebastien Loeb and Timmy Hansen were right behind Ekstrom after jokering on lap one. At the end, Loeb challenged hard, but Ekstrom took the win ahead of the nine-time World Rally champion, with Hansen third. Ford endured a tough weekend, with both Ken Block and Andreas Bakkerud being eliminated in the semis – the latter faced a fight to even make it that far, only making it by virtue of being top qualifier in the final heats.

Robert Shwartzman won the opening race of the season from pole position in a shortened race after an accident from one of three Red Bull junior drivers in the championship, Neil Verhagen. Shwartzman dealt well with two safety car restarts while his rivals battled behind before Verhagen ended the race early by crashing at Curva Grande.

Will Palmer won the second race after taking the lead at the start from pole sitter Gabriel Aubry, who later retired following a collision with race one winner Shwartzman. Sacha Fenestraz finished second ahead of Max Defourny and Verhagen, the latter have climbed up from 11th.

Videos not available yet.

The NASCAR race at Bristol has been postponed to Monday due to rain.

Marc Marquez won the third Moto GP race of the season at Austin ahead of Valentino Rossi and Dani Pedrosa as the championship leader heading into the race and only winner so far this season – Maverick Vinales – crashed out.

While F1 returns in Russia, the following series are also in action next weekend:

7 comments on “Breakthrough victory in lively IndyCar round”