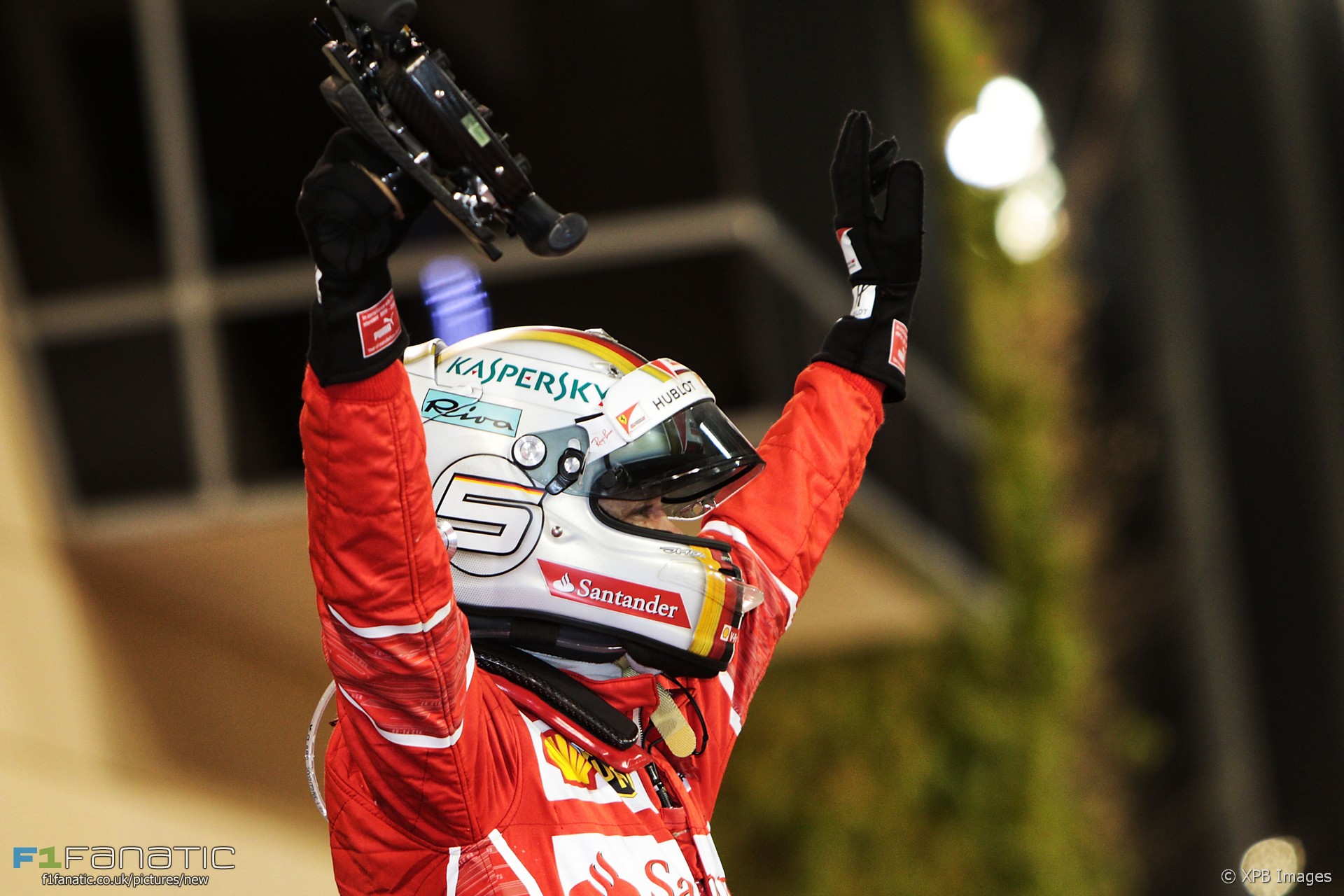 Sebastian Vettel was voted Driver of the Weekend for the fourth time in the last six races after winning the Bahrain Grand Prix.

Here’s what you had to say about the world championship leader’s latest performance and the other notable drivers in last week’s race.

Ferrari looked strong from the get-go on Friday but Saturday reinforced the impression that Mercedes can extract more performance over a single lap in qualifying.

Nonetheless Vettel split the two Mercedes at the start then made a daringly early pit stop work with a flying lap out of the pits and a little fortune with the Safety Car. After rebuffing a strong attack from Valtteri Bottas he produced a scorching pace to keep Hamilton out of the picture.

Cannot fault him for the +0.4s deficit in qualifying which seems more and more likely down to a special qualifying setting that Mercedes run. Whilst beside the point, I haven’t really come across any article which explains how and why Mercedes benefit from it during qualifying but not the race. Anyway, Vettel out-qualified his team mate by a significant margin, headed Practice times and put in a flawless performance during the race.

Other than shouting ‘this new 2017 formula is brilliant’ at least ten times during the race, I remember trying to convince the missus (who has no choice but to watch F1 every time it’s on) how amazing it was that an F1 car can actually follow another F1 car and more importantly how the art of defending works. A very important part of Vettel’s driving was not just how he attacked (at the start) but how he defended (keeping Hamilton out of the DRS zone when pursuing Bottas and after the Safety Car restart). Just flawless I must say.
Urvaksh (@Thedoctor03)

Topped first and second. Unfortunately the qualifying pace wasn’t there but he didn’t put a foot wrong in the race. Excellent weekend.
Justin (@Boombazookajd)

He’s blowing away Raikkonen in both qualifying and race and he’s beating Hamilton as well.
Patrick (@Anunaki)

While Vettel took half of your votes, Sergio Perez was a clear runner-up as one in four of you picked him as the star of Bahrain.

Perez dropped out in Q1 after being delayed by the yellow flag due to Carlos Sainz Jnr’s Toro Rosso. However from 18th on the grid he charged through the field for an excellent seventh.

Qualifying was not down to him but on Sunday despite Force India’s poor pace both on qualifying trim and race trim, Force India delivered, they had no power unit glitches, no bad strategy calls on Perez great moves great result.

I’m not sure what happened to Ocon he had a really strong start of race, he was the star of the start, he was quickly into the points, still really professional job.
Pennyroyal tea (@Peartree)

Speaking of Sainz, it was a hero-to-zero weekend for him after China:

I know Sainz wasn’t at fault for what happened in qualifying this race weekend but surprisingly, in most of the last few races, even including some towards the end of last year, Kvyat has being beating Sainz quite a bit more often in qualifying.

In Bahrain, Sainz made a huge mistake. I’d say nearly as bad as what Kvyat did to Vettel in Russia last year only it resulted in a double retirement. That was a very clumsy mistake from Sainz there.

Kvyat had a strong race with loads of good little scraps with other drivers. Although he did seem to keep getting pushed right off the track at times. Although it was out of the points, it was certainly an entertaining drive.
Ben Rowe (@Thegianthogweed)

Another driver who stood out for many was Nico Hulkenberg:

He was a huge 1.2 secs ahead in qualifying and was on a different lap to Palmer in the race.

It’s such a shame that people seem to get swept up in the end of Mercedes dominance. Not that Vettel was bad but I wouldn’t say he did anything exceptional this weekend.
@Oversteer

Just caught up on the #F1 great to see Vettel competitive again @alo_oficial needs an opportunity to show his talent @McLarenF1 sort it out!

I knew #Vettel would win from the qualifications. He needed this to affirm his path to 5th title. Now, on to #RussianGP in two weeks. #F1

You can tell my Stroll’s attitude that he won’t last long in #F1. Wrong move by @WilliamsRacing! #wrongdriver #BahrainGP

Decent race that. Merc seriously need to sort out their strategies, them last few laps from Lewis tho 🔥 #BahrainGP

#BahrainGP @ValtteriBottas @LewisHamilton. Dissapointed in Lewis. Promised to give position back but didnt. NOT PLAYING FAIR WITH OTHERS !

It's kinda humiliation for Alonso to be the number 2 in a team, bt he dsprtly needs better and faster car to do anything anyway. #F1

Not a @LewisHamilton but he was robbed with penalty! Daniel Ricciardo wasn't held up, came out ahead didn't lose anything! @F1

#BahrainGP tips for @lance_stroll :you should be politer in press conference, remember you're just a rookie and learn to drive a #F1 car ok?

#F1 The 5-second penalty on Hamilton proved to be the decider. Vettel gave a good fight. Congrats to him. @kokodapuzzy @aywenger

Heartbroken for @alo_oficial. 3rd DNF. @HondaRacingF1 and @McLarenF1 don't deserve a driver of his caliber this season. #F1 #BahrainGP

That's what you get for pit lane naughtiness, Lewis. #BahrainGP

As much I support Lewis Hamilton, he deserved to lose today. That was stupid! 😐 #F1 #BahrainGP #MercedesAMGF1

Not impressed by the "calls for Merc to choose HAM as no 1 driver" headlines. Who said this? LH?! Bottas didn't stupidly get a 5s pen! #F1

Someone should just get Lance Stroll a Rascal Scooter and paint "F1" on it. That way he can finish a race without DNFing. #Formula1

I just feel bad for Lance Stroll. The guy is performing way beyond what anyone expected but can't catch a break #BahrainGP

Unless Ricciardo is in a Ferrari or Mercedes 5th is about the best he can get out of his car. #F1

Stoffel's car in garage before race, his 3rd power unit in as many races, 4 allowed thru season. Honda, are you kidding me?! #F1 #BahrainGP

So #Hamilton was let past by #Bottas twice and failed to overtake anyone else shouldnt #Mercedes make him give the place back? #f1 #bahrain

Driver of the day for me…. @PWehrlein Solid way to shut up some critics. #BahrainGP

*Dive from about 100 yards behind the car in front, aim for it, smash into it…and then say "he hit me"

Stroll crash a good example why excitement re Sainz needs to be reined in. Still some rough edges to iron out before he can join F1's elite.

I think Vettel dropped lucky with that safety car. Good effort on Hamilton's part to try and catch him up. #F1

Stroll is out of his depth in F1. Massa is carrying the team. They're lucky to have him!

Sterling drive from Vettel. Already Lewis is a race win clear of Bottas. Looking more and more like a two-horse race this season! #BahrainGP

I feel bad for @lance_stroll poor guy gets caught in stupidity. Next race Lance. What hurts us only makes us stronger. #f1

Finally all caught up with the #F1. Stupid move Lewis, that 5 second penalty cost him the win. Decent race though. #BahrainGP #TeamLH

Just watched the Bahrain Grand Prix. Hamilton cost himself unfortunately, may well have won had he not got that needless time penalty. #F1

Not Stroll's fan but that was Sainz's complete fault. I think he's getting too full of himself #ChangeYourAttitude #Sainz #F1

Feels like Lewis will be kicking himself after today – this season has the makings of a classic though! #BahrainGP #F1

#F1 #Mercedes got their tactics all wrong today instead of unleashing #Hamilton,they impeded him,letting #Bottas dominate initially to lose

My DOTD goes to my fav F1 driver Sergio Perez! He started down in P18 and finished P7 – an incredible comeback from the Mexican. Superb! 😁👍

Choked to see @lance_stroll not finish in Bahrain. Hope he turns his season around and doesn’t run out of his 9-Lives soon. #F1 #BahrainGP

#BahrainGP Lewis was unsporting in pit lane and deserved to not be on the podium. Just ridiculous. Shame on Mercedes forcing Bottas out.

After 3 races Mercedes are already mugging Bottas off , there's no need for team orders at this stage of the season! #f1

Team orders. Sabotage on tyre pressures for bottas by mercedes. There. I said it. #f1 #bahraingp #Formula1

Driver of the race is @alo_oficial. Too bad about the Mclaren he is overdriving the car #BahrainGP

Great race for @SChecoPerez What a drive, man! #SkyF1 #F1 #BahrainGP Keep it up, you are making us Mexicans proud!

Can't help but wonder what @redbullracing @Max33Verstappen could have achieved today.. #BahrainGP #F1

But for Hamton being an eejit and copping a penalty, that race would've gone to the flag. Shame. #BahrainGP #F1

2ND race in a row Lance Stroll has not been looking in his mirrors and left enough space. #BahrainGP #SkyF1 #AskCrofty #BahGp #F1

I love Kimi. But can't help feeling that he's well past his use by date. The way he complains all the time is just ridiculous. #F1

Watching Hamilton run away from Bottas so far just makes me respect Rosberg more for the fights he could put up against HAM. #F1

It was sad to see @ValtteriBottas be a victim of #TeamOrders at #BahrainGP. @MercedesAMGF1 Shameful.

How did Daniil Kvyat make so many impressive overtaking moves yet still end up last but one? 🤔 #BahrainGP