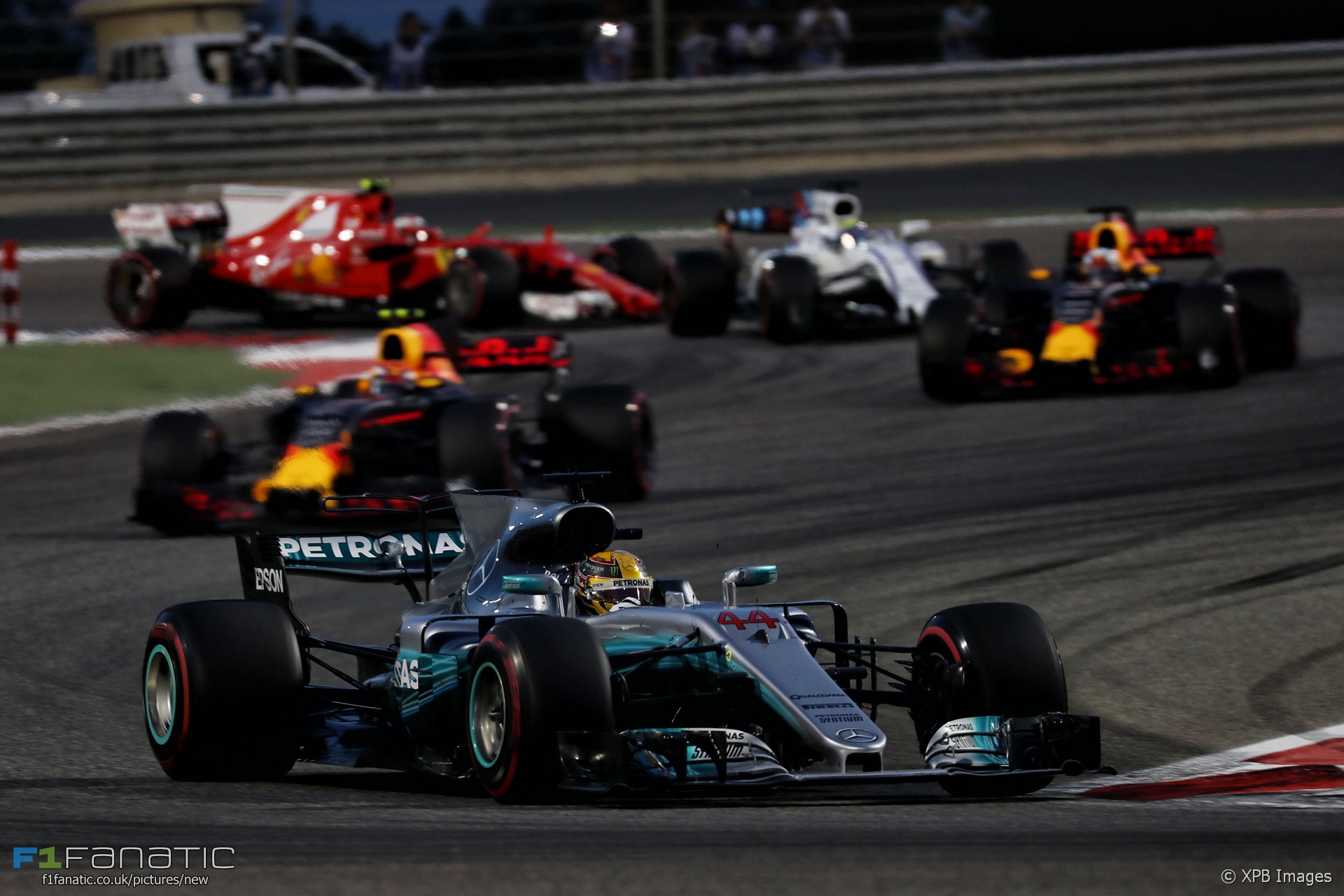 Did Lewis Hamilton’s five second penalty cost him victory in the Bahrain Grand Prix? It seems that whatever Mercedes did, he wasn’t going to win this one.

How the race actually finished

The graph above shows the time gap between Vettel, Hamilton and the race leader’s average lap time:

The stewards notified Mercedes of Hamilton’s penalty shortly after the restart. At this point he lay third behind his team mate with Sebastian Vettel leading.

By twice ordering Valtteri Bottas to let Hamilton by, and making a second pit stop during which the penalty was served, Mercedes manoeuvred Hamilton into second place. He spent the final laps closing in on Vettel, but wasn’t able to catch the Ferrari.

What if Hamilton had not had the penalty and used the same strategy?

This graph shows the hypothetical time gap between Vettel, Hamilton and the race leader’s average lap time if Hamilton had not served a five-second time penalty:

If Hamilton hadn’t been penalised he would have emerged from his second pit stop around five seconds closer to Vettel. We can therefore model how the race would developed quite easily.

The gap between the two at the end of the race would have been much closer. Instead of finishing 6.6 seconds behind Vettel, Hamilton would have almost been within the one-second DRS range. Indeed, this projection has him ‘leading’ at times’,

And whereas in real life Hamilton clearly backed off in the final laps when it became clear he wasn’t going to catch Vettel, that needn’t have been the case in our hypothetical scenario.

But as the motor racing maxim goes ‘catching is one thing but passing is another’. Red Bull’s Christian Horner estimated a driver needed to have at least a 1.3 second lap time advantage to pass another car in Bahrain. Vettel was able to lap as low as 1’34.0 over the final laps, Hamilton barely half a second quicker.

Another possibility was for Mercedes to fit super-softs to Hamilton’s car. He had a new set of them, and asked the team why they hadn’t been fitted when he rejoined the track. But clearly the team felt they could not make them last long enough, a view potentially reinforced by the problem Bottas had on his second stint.

If Hamilton had not received a penalty and Mercedes had stuck to the same strategy we’d have had a closer and more exciting finish. But in all likelihood Hamilton wouldn’t have been in a position to win, unless he’d pressured Vettel into a mistake.

But what if Mercedes had used a different strategy?

What if Hamilton had not had the penalty and didn’t pit again?

This graph shows the hypothetical time gap between Vettel, Hamilton and the race leader’s average lap time if Hamilton had not served a five-second time penalty or made a second pit stop:

At the point Hamilton’s penalty was announced the Mercedes driver didn’t need to make another pit stop. He’d started the race on super-softs and switched to the softs, fulfilling the need to use two different tyre compounds. Both the cars in front of him, however, needed to come in again for a second stop.

Because of his five-second penalty there was no point in Mercedes leaving him out. All Ferrari needed to do was have Vettel catch the Mercedes and finish within five seconds of it to be declared the winner.

But if Hamilton hadn’t picked up a five-second penalty, could he have stayed out and kept Vettel behind him until the end of the race? That all comes down to how quickly his tyres would have gone off – and it doesn’t look encouraging.

At the point Hamilton made his final pit stop in the race he was losing around five hundredths of a second per lap from his soft tyres. It’s likely they would have started to degrade more quickly than this, but for the purpose of this exercise that loss of performance is used in the graph above to simulate Hamilton’s race without a second pit stop.

As the third graph shows Vettel would have been quick enough to complete the race distance 16 seconds before Hamilton. This doesn’t take into account how difficult it might have been for Vettel to pass the Mercedes. But it seems he would have had little trouble.

Vettel’s quickest lap time on his final stint in real life was a 1’33.826 and he was still able to get within two-tenths of that over the final laps. Had he been charging after Hamilton it would have been less.

Given that tyre degradation was centred on the rears in Bahrain, Vettel would likely have had little difficulty getting within range of Hamilton at the exit of one of the slow corners heading into a DRS zone. Indeed, Mercedes suggested Hamilton’s pace disadvantage would have been so severe other cars could have passed him too.

Hamilton’s penalty was one of several things which went wrong for Mercedes in Bahrain, including tyre pressure mix-ups and slow pit stops due to problems with the garage equipment. But the penalty on its own was not decisive.