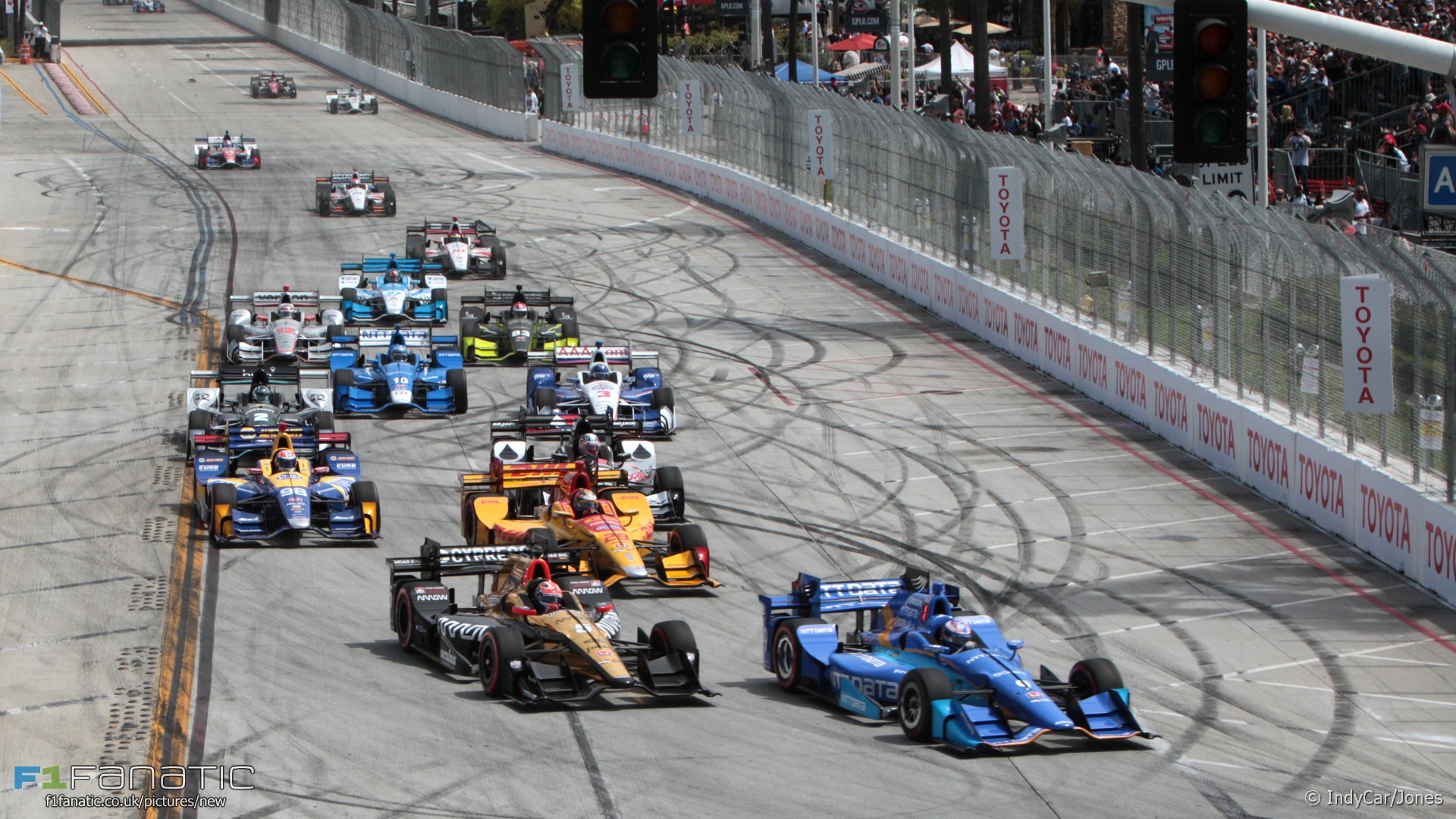 Honda only took two IndyCar wins in the whole of 2016 but have won the first two rounds of this season. Just as surprisingly neither of the series’ powerhouse squads Penske and Ganassi, each of which runs four cars, have tasted victory yet in 2017.

The IMSA series also raced at Long Beach last weekend but there were familiar faces on top of their third podium of the year.

Also last weekend the World Touring Car Championship season opened with a depleted field of just 15 cars following the withdrawals of Citroen and Lada. And the World Rally Championship had another different winner in its fourth event of the year.

A bizarre spate of late-race failures for the Andretti team cost Alexander Rossi and Ryan Hunter-Reay their chances of victory. That allowed Penske’s Josef Newgarden to take third ahead of a disgruntled Scott Dixon.

The Ganassi driver led the opening stages and looked well-placed for victory as drivers bid to eke out fuel to complete the race with just two pit stops. His team pulled him in early, however, committing to a three-stop route which left him mired in traffic.

Pole sitter Helio Castroneves saw his three-year win-less streak continue after a poor start. Team mate Will Power’s race was ruined by a first lap collision with Charlie Kimball. The fourth Penske of Simon Pagenaud raced to fifth having started last due to a qualifying penalty.

The number ten Wayne Taylor Racing Cadillac of Ricky and Jordan Taylor took its third win of the season, continuing a perfect record in 2017, though the race was from certain until the final minutes in a thrilling race throughout the field. in the short-format 100 minute event, five caution periods early on meant strategy was jumbled in every class, and with 20 minutes to go, the leading Prototype class cars found themselves mired in the overall midfield.

The number two Nissan took advantage of caution strategy to find itself in the lead with Ryan Dalziel at the wheel after a short first stint from Scott Sharp, but the Taylor car driven by younger brother Jordan took the lead with a brilliant move in traffic. The ESM Nissan eventually finished second, while Mazda took their first IMSA podium with Jonathan Bomarito and Tristan Nunez. Dane Cameron was fortunate to escape injury in a huge accident in which his Whelan Engineering car moved the concrete wall by almost half a metre.

While the first three Prototypes crossed the line, the track was blocked for a second time at the hairpin after Robert Alon dived inside two of his GTD rivals, putting them in the wall. First to arrive at the road block were the GTLM leaders, with the number three and four Corvettes line astern. While Antonio Garcia’s number three was ahead, he was boxed in, and after waiting to see if his team-mate could find a way through, Tommy Milner went past to take victory a year after being taken out of first place at exactly the same point in the track while Garcia was left to settle for fifth once the blockage cleared.

The number 24 BMW of Martin Tomczyk and John Edwards was strong throughout, even holding the outright lead of the race at one point, but a temporary power issue took him out of contention. Second in class were Ford with Ryan Briscoe and Richard Westbrook, while Porsche salvaged third from a tough weekend with Laurens Vanthoor and Kevin Estre.

Mercedes took another win in GTD, with the Cooper MacNeil and Gunnar Jeannette pairing proving unbeatable, even when Jeannette made contact with the Mustang Sampling Cadillac Prototype driven by Christian Fittipaldi, eliminating the top-class car from contention. Mercedes also took second with Ben Keating and Jeroen Bleekemolen, while Ferrari finished third with Alessandro Balzan and Christina Nielsen.

After crashing out of comfortable leads in both Monte Carlo and Sweden, Thierry Neuville finally picked up his first victory of the season in France, but not before the long-time rally leader hit trouble on a Saturday for the third time in four rallies.

Sebastien Ogier was imperious as always on home tarmac, but it was Kris Meeke who led early on, stretching a small gap on Friday and then on the opening stage of Saturday. It all fell apart on stage six however as his Citroen crossed the finish line smoking heavily – the engine of his C3 having given up the ghost – with Meeke having to push his stricken car from stage-end.

Neuville – who had put in a stellar performance – inherited the lead having overtaken Ogier in the same stage, and never looked back as the defending world champion suffered a variety of problems through Saturday’s remaining stages, and Sunday too. He initially slipped to third behind Dani Sordo on Sunday morning, but took the place back on the final stage.

The WTCC season kicked off in Morocco and Esteban Guerrieri continued Argentina’s fine record in the series after champion Jose Maria Lopez’s departure. In the opening race Tom Coronel started from pole position ahead of Guerrieri, though in the heat the longevity of the Chevrolet’s brakes was questionable. The start was messy, with Yann Ehrlacher hitting the stalled John Filippi, eliminating both. Nestor Girolami and Tom Chilton also started poorly, falling to the back. Rob Huff didn’t make it further than lap one either with overheating troubles.

On lap 12 Coronel’s braking worries proved well-founded when the pedal went long into turn three, costing him the lead and dropping him to seventh. This left Guerrieri clear in the lead, a position he kept until the end ahead of Thed Bjork, Mehdi Bennani, Nicky Catsburg and Norbert Michelisz.

Race two was a Honda domination. From pole position, Tiago Monteiro led throughout to take the win, while Michelisz jumped Nestor Girolami at the start to take third place. The race remained fairly static until lap six, when Aurelien Panis broke his front-right suspension on a kerb and stopped on track, bringing out the safety car.

The remainder of the race saw most drivers stay line astern, only deviating from the racing line on the straights to get cool air onto the cars, though Huff and Coronel battled hard for eighth, with the Dutchman keeping the advantage to the end. Monteiro won by less than a second ahead of his team-mate, while Girolami, Bennani, Catsberg and Chilton rounded out the top six.

Reigning NASCAR Cup champion Jimmie Johnson took his first victory of 2017 at the resurfaced Texas Motor Speedway. He started from the back after choosing to change tyres after a spin in qualifying, but worked his way back to the front and passed Joey Logano for the lead with 16 laps to go. Early leader Ryan Blaney slipped to 12th at the flag.

Lewis Hamilton won the second Grand Prix of the year in China ahead of Sebastian Vettel to tie the pair on points in the championship. Max Verstappen finished third after a storming drive from 16th on the grid.

Maverick Vinales continued his winning start to the MotoGP season, taking victory in race two in Argentina ahead of Valentino Rossi and Cal Crutchlow after Mar Marquez fell while leading. He was one of a number of high-profile retirements, as Jorge Lorenzo hit Andrea Iannone on the opening lap and fell, Dani Pedrosa followed his team mate down the road at turn two a handful of laps later, and Andrea Dovizioso was wiped out by Aleix Espargro.