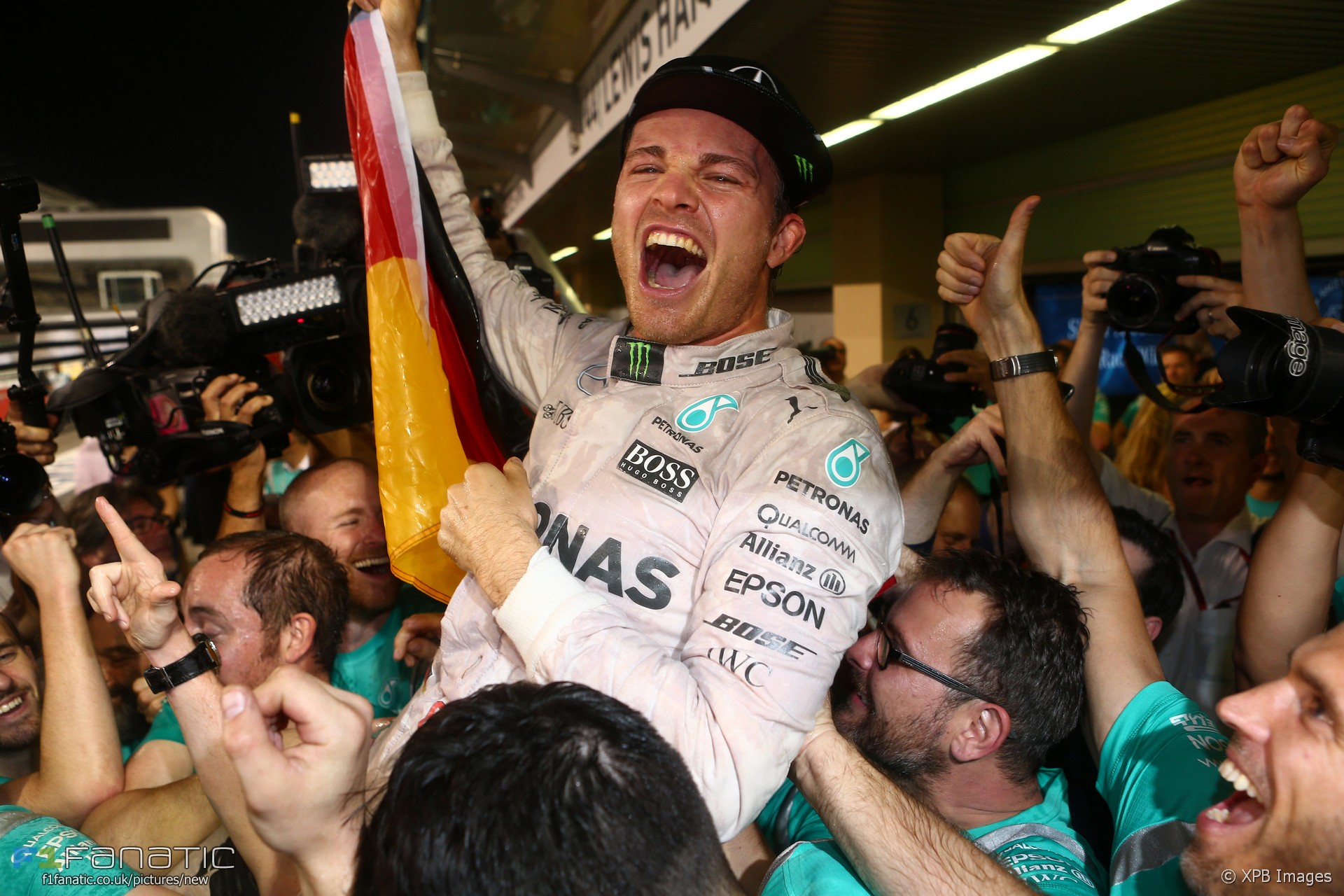 For the first time since 2010 a new driver won the world championship yesterday. Nico Rosberg is the 33rd person to claim the title.

Remarkably, he is the second son of a previous champion to win the title himself. Rosberg emulated his father Keke, who also won the crown at the final race, in 1982.

The Rosberg join the Hills – Graham and Damon – as championship-winning families.

However while the Hills won each of their championship-clinching final races (in 1962, 1968 and 1996), the Rosbergs did not. Fifth place in the 1982 title-decider earned Keke Rosberg the crown while Nico Rosberg placed second yesterday.

Another father-and-son similarity is that both Rosbergs took the title despite other drivers having won more races than them. The 1982 season was an extreme example as Keke Rosberg scored just one win to the two apiece of Didier Pironi, John Watson, Alain Prost, Niki Lauda and Rene Arnoux. Nico Rosberg won nine races this year but Lewis Hamilton’s victory on Sunday was his tenth of the year.

Hamilton has therefore smashed the record for scoring the most race victories in a season without winning the championship:

Missing out on the title in this fashion will undoubtedly be a bitter pill for Hamilton to swallow. He led more laps, set more pole positions, had more podium finishes and more victories.

But Rosberg scored more points. (And set more fastest laps). He also led the championship for the vast majority of the season: 17 out of 21 races.

The last driver to win the championship despite not winning the most races during the season was Hamilton in 2008. He won five races to Felipe Massa’s six, after Hamilton’s on-the-road victory at Spa was handed to Massa following a controversial penalty.

Looking at past points systems serves to underline how close the championship was. Had the final race been worth double points, as was the case in 2014, Hamilton would have won the title by two points. Under the 1991-2002 points system giving ten for a win the two drivers would have tied on 136 points each and Hamilton won by dint of his superior wins tally.

Using the short-lived 2003-09 system Rosberg would have taken the title by a fractionally narrower margin of four points. As it is, this was the third-closest championship win since the current system was introduced in 2010. That year Vettel beat Alonso to the title by four points, and two years later he again beat Alonso, this time by just three.

Rosberg has also broken a record by taking more than 200 race starts to win the world champion.

He surpassed Nigel Mansell as the driver who started the most races before winning the championship. However because of the shorter championships in the eighties Mansell raced in Formula One for longer before taking the title:

Rosberg’s title win means he has lost his claim to be the most successful driver never to have won the championship – something he certainly won’t complain about. Stirling Moss is once again the driver with the most wins but no championship, a record he also previously lost to and then regained from Mansell.

This also means Rene Arnoux is once more the driver with the most pole positions but no title. Rosberg was one shy of matching Gerhard Berger for most fastest laps without a title (21) and 11 shy of Rubens Barrichello’s record for most podiums without a title (68).

This was the 29th time in the history of the world championship that the title was decided in the final race*. Despite the tension of the finale as Hamilton tried to hold his team mate up, at no stage was Rosberg in a position to lose the title: on every laps he was close enough to Hamilton for the points system to be in his favour.

As a result Hamilton joins the small club of drivers who had the championship taken off them by their team mates. This has happened just five times before in the history of the world championship:

One striking point which unites all four of those examples of the championship changing hands between team mates is the role reliability played in the outcomes. See this article for more:

Rosberg’s example is unique in that no driver has ever previously taken the title off a team mate who had won the previous two championships. Though it bears pointing out that very few drivers in F1 history had the opportunity to do this.

Despite Mercedes fears, Sebastian Vettel was unable to overhaul their drivers in the final laps. This meant Ferrari ended the season without a win for the second time in three years, having also done so in 2014. This is clearly the team’s toughest spell since they went three years without a win between 1991 and 1993.

For the first time since 2009 every competing team scored at least one point. Force India achieved their highest-ever finishing position in the constructors’ championship with fourth, though the team finished third in 1999 when it was Jordan.

Daniel Ricciardo came close to scoring in every race as he appeared in the top ten at almost every round. The only exception was Russia where he was hit on lap one and finished 11th, just over two-and-a-half seconds behind Jenson Button.

Button was one of two drivers on the grid saying farewell to Formula One. It was a happy ending for Felipe Massa who scored points for Williams in his 250th and final race.

But a suspension failure after hitting a kerb was an unworthy end to the 2009 world champion’s career. At least thanks to Rosberg Formula One will still have five champions on the grid in 2017.

*In some earlier seasons the matter of which race the championship was decided at is confused by the fact that planned rounds of the championship were cancelled. This was the case in 1955, for example, when Juan Manuel Fangio won the title at the British Grand Prix but this was not recognised at the time as another race was expected to held later in the year.

Have you spotted any other interesting stats and facts from the Abu Dhabi Grand Prix? Share them in the comments.