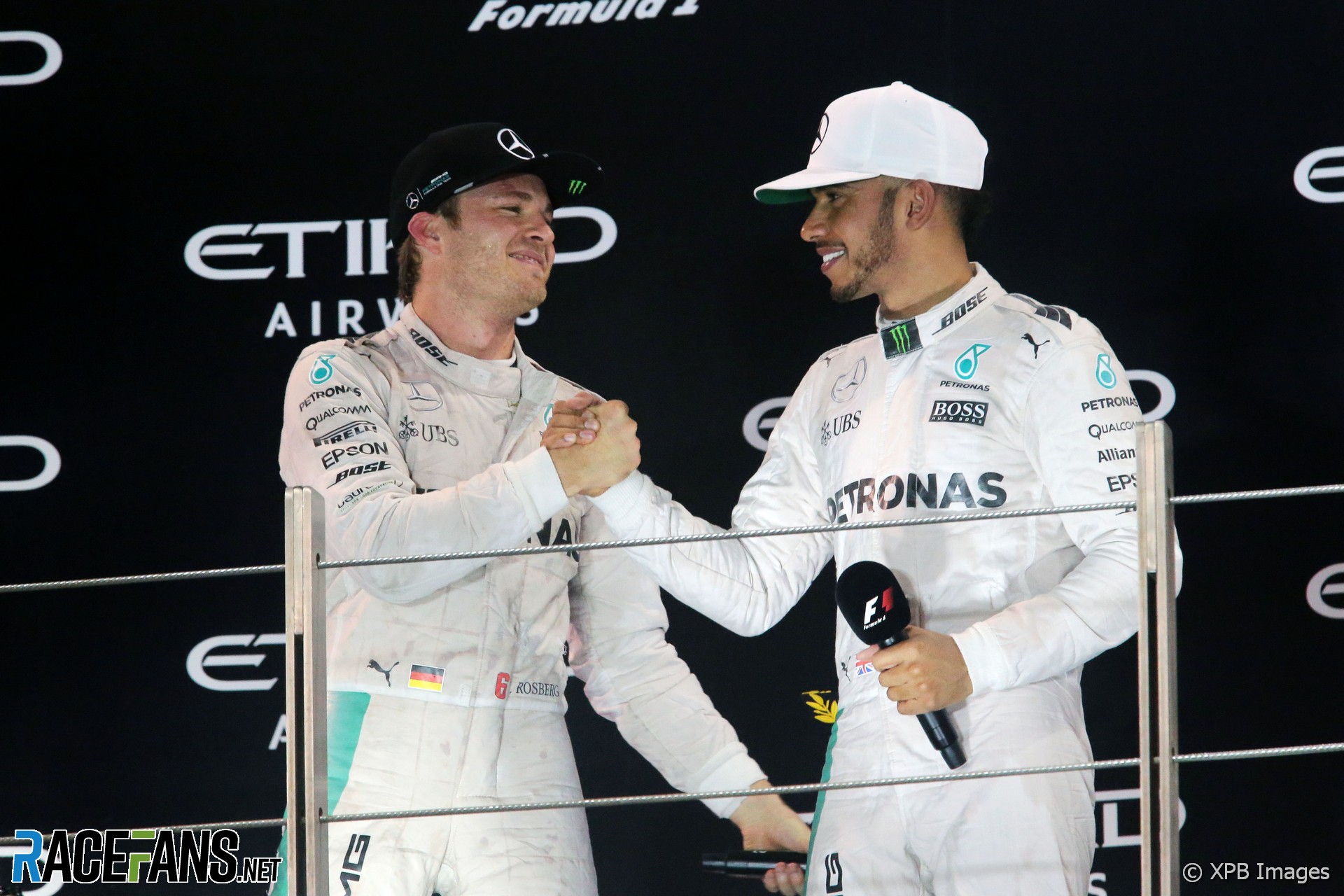 Nico Rosberg became world champion in Abu Dhabi in a race of nail-biting tension which endured until the last lap of the season.

An audacious and unprecedented bid by Lewis Hamilton to back his team mate into their rivals kept Rosberg’s title hopes in doubt until the end – and put the outgoing world champion sharply at odds with his team.

And while the party started for Rosberg he had little time to reflect on just how close Hamilton’s plan had come to succeeding.

Hamilton speeds away them slows down

Hamilton’s victory prospects looked assured from the moment he smoothly pulled away from the lights. He didn’t so much as twitch in his team mate’s direction, let alone try to chop him on the run to turn one.

Behind them the Red Bulls paid the price of starting on the harder super-soft tyres. Kimi Raikkonen was immediately past Daniel Ricciardo into third. And Max Verstappen had Nico Hulkenberg’s Force India driving around the outside of him.

Understeering out of the first corner, Verstappen bounced off Hulkenberg’s sidepod and spun in front of the pack. He straightened the car up and headed off in pursuit, but losing the feisty young driver from the fray was not something Hamilton wanted to see in his mirrors.

Because, for all his pre-race talk of how difficult it would be to spoil Rosberg’s race at Yas Marina, it was clear from lap one Hamilton intended to give it a go anyway. Instead of cruising away from his team mate Hamilton was clearly managing his pace, allowing the chasing pack to keep in touch.

But with the ultra-soft tyres he had started on good for only a few laps, Hamilton couldn’t afford to hold the pack up for long. And before making his pit stop he needed to put in a quick lap to reduce the risk of being jumped by a rival if he had a slow stop himself.

On the fifth lap Hamilton backed off to a 1’46.8 – the top five were now covered by less than four seconds. Next time around he put his foot down. Raikkonen, third, was quick to warn Ferrari: “He’s really going now so don’t waste time”.

Sure enough Hamilton hit the pit lane entry on lap seven and Raikkonen followed him in, seizing the chance to undercut Rosberg. Hamilton was briefly delayed as Raikkonen passed him on the way to the Ferrari pit box. Raikkonen’s turnaround was among Ferrari’s quickest but not among the very quickest.

Even so the benefit of the undercut made him a potential threat to Rosberg. And when he pitted with Sebastian Vettel on the next lap and was held up by the Ferrari to an even greater degree than his team mate, it was clearly going to be close.

Rosberg threaded his way through Yas Marina’s pit exit tunnel and popped back onto the track fractionally ahead of Raikkonen. This was a major moment in the championship fight: Raikkonen ultimately finished last among the top six cars and a stint stuck behind a Ferrari on similar-age tyres could have cost Rosberg the top-three result he needed.

But Rosberg wasn’t out of the woods yet. Ahead of him lay Verstappen, who had made quick progress following his lap one slip-up. His best hopes of a good result now lay in a one-stop strategy, a plan which Hamilton’s slow driving had made a more realistic option.

“Don’t take any risks with Verstappen, you’re doing the right thing,” the Mercedes pit wall told Rosberg at first. But as the reality of Verstappen’s strategy dawned and the laps ticked down the advice changed. “It’s critical now we start passing Verstappen,” was a message Rosberg did not want to hear.

Going wheel-to-wheel with the driver who has attained notoriety during 2016 for his uncompromising moves was not an attractive prospect for Rosberg with the title on the line. “He went full-on aggressive of course, he didn’t given an inch as usual,” Rosberg reflected afterwards. “But fair play, we didn’t collide and I got by, so that felt amazingly good. It was an awesome feeling at the time.”

Notwithstanding Rosberg’s significant advantage thanks to his fresher tyres, this was still a gutsy piece of driving. The pair tiptoed around the slow chicane at turn eight and nine before Rosberg used his superior traction to out-drag Verstappen from the corner, keeping the Red Bull tucked up at turn 11. This was a vital job done.

With his first attempt at hampering Rosberg’s race having failed, Hamilton had one shot left to make Rosberg vulnerable to the chasing pack. This was to back off sharply in the final laps, bringing the opposition in range once more. Crucially, Mercedes would be unable to intervene directly as neither driver would require a pit stop in the final laps.

Hamilton and Rosberg made their final stops on laps 28 and 29 respectively. Raikkonen had already been in by this point, but having lost time scrapping with Ricciardo he was no longer a threat and nor was the Red Bull, despite having finally jumped the Ferrari.

Vettel, initially frustrated at having missed the chance to pit early, now converted to a long middle stint with the aim of running the super-soft for the final charge to the flag. With his rivals all on the softs, this made him a threat which the Mercedes pit wall took seriously.

Sure enough by lap 45 Vettel was seven laps into his final stint on super-softs and in that time had torn over 11 seconds out of Hamilton’s lead. With ten laps to go he was six-and-a-half seconds behind with the two Red Bulls separating him from the Mercedes.

Hamilton continued to lap far off his potential pace. Long prior to the race Mercedes had made it clear it would be ‘business as usual’ on the pit wall irrespective of the fact they had already won the constructors’ championship.

The team had previously warned Hamilton about holding his team mate up in other races. But with the championship hanging in the balance and the season laps away from ending, Hamilton took things to new extremes, putting Rosberg in an excruciating position.

Hamilton justified his tactics afterwards. “I don’t think I did anything dangerous today,” he said. “I don’t feel I did anything unfair. We’re fighting for a championship, I was in the lead, I control the pace. That’s the rules.”

The circumstances of the championship fight were also weighing on the race leader’s mind, particularly as the team made increasingly insistent calls for him to speed up. “I’m in a position where I’ve obviously had a lot of points lost during the season so for me, I’m out there fighting and I generally never try to do anything to harm the team or the brand or anything like that.”

“But we’ve won the constructors’ championship so it was down to me and Nico today. And however, they still felt they needed to make comments.”

Rosberg, who in his mirrors could see two rivals threatening to deprive him of the championship, warned the team “this is really slow”. With an abundance of optimism he suggested they “maybe invert the cars and if, by the end of the race, Lewis is still second I’ll let him by”. Unsurprisingly this did not come to pass.

Hamilton had evidently planned his defensive mode carefully, slowing Rosberg around the parts of the track where passing was impossible and drawing clear elsewhere. “Lewis was using all his skill to do it perfectly,” Rosberg conceded afterwards, “there was absolutely no way for me to manage to get by”.

“I didn’t want to be in his shoes”

The tension on the Mercedes pit wall ratcheted up as Vettel picked his way past the Red Bulls. Having rebuffed his race engineer, Hamilton now had the firm voice of Paddy Lowe telling him “we need you to pick up the pace, that is an instruction”.

Still Hamilton refused to relent. Now Vettel had Rosberg in his crosshairs: “I didn’t want to be in his shoes,” Vettel admitted. But the Ferrari driver’s performance advantage was already waning.

“Daniel was fairly straightforward to pass. But then when I arrived behind Max, the problem is that you have car after car after car and you begin to slide, so my tyres got worse.”

On top of that, Rosberg’s close proximity to Hamilton was actually helping him on the straight, giving him the ability to use DRS to thwart Vettel’s passing efforts. “Max didn’t have DRS, whereas at the end Nico had DRS,” said Vettel.

“The second straight was the spot I was having a look, but Nico defended well and closed the inside so I couldn’t really go anywhere. I couldn’t try something really stupid because Lewis was just ahead, so if I really dived down the inside or down the outside then I have a risk of hitting Lewis at that point.”

In the final laps Hamilton edged far enough ahead that Rosberg no longer had the benefit of DRS. Even so it took two laps for Vettel to get close enough to make a move, which Rosberg was easily able to resist.

On the final lap Rosberg was back in DRS range of Hamilton, and Vettel’s last attack was to no avail. Hamilton crept around the final sector but finally accepted the inevitable. Incredibly, his tenth victory of the year was also the one which ensured he would lose the championship to the man who followed him home.

The nail-biting tension at the head of the field did not distract from a scintillating afternoon’s racing behind them. Here too the race was the usual Yas Marina stalemate with retirements and the occasional slip-up the only points of interest.

Jenson Button’s fine career came to an unfit end with suspension failure. Felipe Massa at least managed to bow out with a points haul in ninth, though the two Force Indias ahead sealed fourth in the constructors’ championship the moment the other Williams retired. The final point went to Fernando Alonso.

The Haas pair finished just outside the points, Romain Grosjean ahead of the departing Esteban Gutierrez. Kevin Magnussen, who will take Gutierrez’s place next year, retired early with steering column damage.

Toro Rosso capped a dismal weekend with a double retirement. Daniil Kvyat parked up early and Carlos Sainz Jnr’s gearbox gave up after he was assaulted from behind by Jolyon Palmer at turn 17.

After a nerve-shredding 55 laps, Rosberg exploded with joy as he took the chequered flag. After two years of being beaten by Hamilton he has achieved something very few Formula One drivers have done – taken the title away from their team mate.

Rosberg became a world champion 34 years after his father accomplished the feat with Williams. Already both have been called fortunate to win their championships. And others have suggested their talents are under-appreciated.

But the new world champion is unconcerned by such suggestions. “I don’t drive for credit,” he said, “I drive to win the world championship and I have achieved that.”

“It was my childhood dream to win the world championship and that’s done and that’s what I’m excited about.”