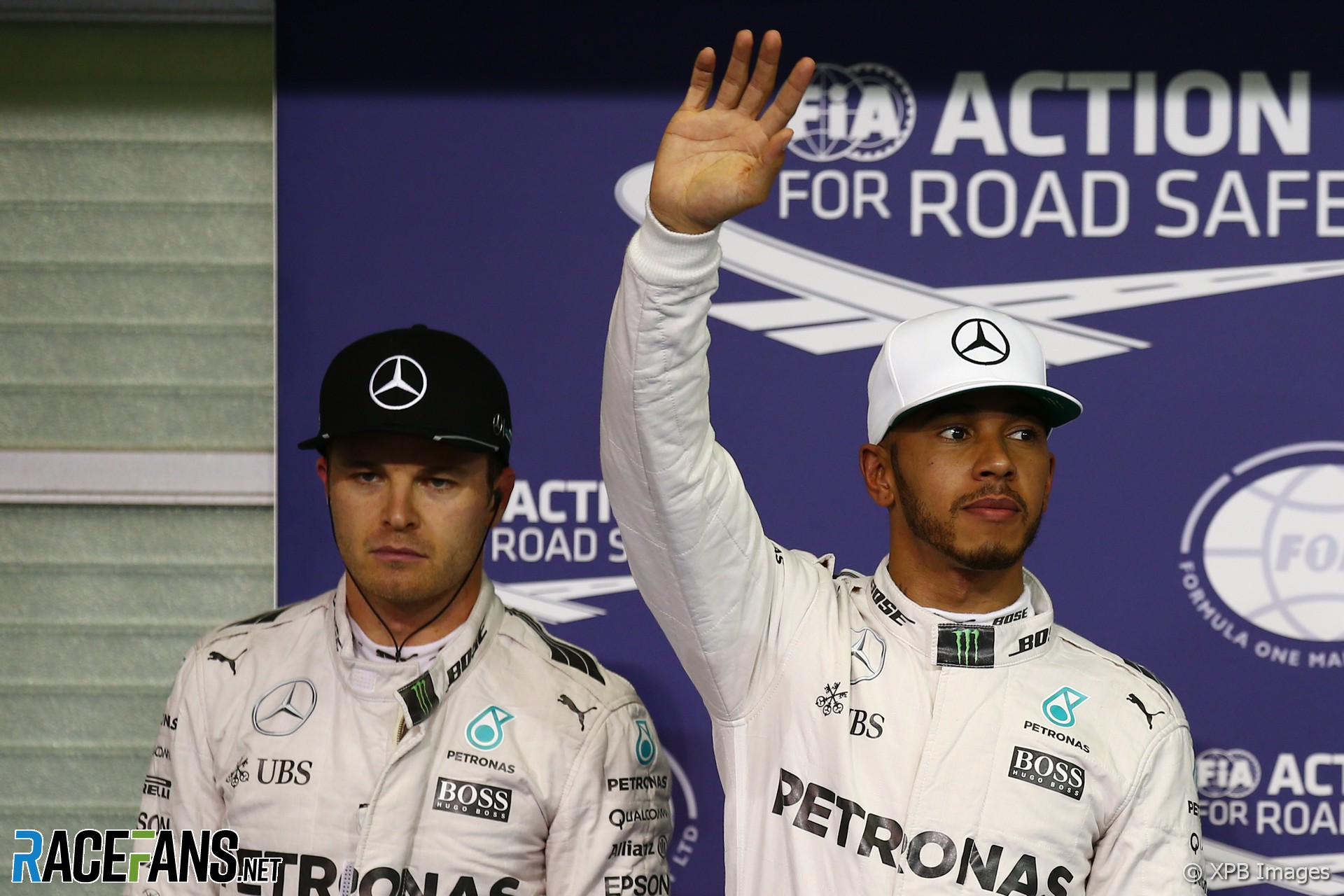 Mercedes annexed the front row ahead of Daniel Ricciardo’s Red Bull and the Ferrari of Kimi Raikkonen.

Hamilton gave a clear statement of intent from the first lap of qualifying. He blazed around the Yas Marina circuit to set a time one second quicker than Rosberg could manage, and 1.3 seconds faster than anything he’d done up to that point. For his part, Rosberg told the team he’d made two mistakes on his first run.

Rosberg’s time was pounced upon by the two Ferrari drivers, who did a pair of laps each on the ultra-softs to take the second and third fastest times. Max Verstappen also demoted the championship leader.

Toro Rosso’s struggles in practice came back to haunt them as neither driver was able to make it into the second phase of qualifying. Both Sauber drivers also failed to make the cut – Marcus Ericsson ended up last after locking up at turn 17. His team mate reported a “surge problem” at turn 14 on his lap.

Manor capitalised on their difficulties to get one car into Q2. Pascal Wehrlein, who is still looking for a seat for 2017, made it in by a tenth of a second.

Esteban Ocon was unable to join his team mate, however. At Renault Jolyon Palmer reached Q2 again while Kevin Magnussen dropped out.

Rosberg brought the gap between him and Hamilton down to more realistic levels in the second phase of qualifying. He came within three-thousandths of a second of matching his team mate’s Q1 time while Hamilton was only able to eke out another tenth of a second. That set up another tense Q3 showdown between the pair.

A great lap by Kimi Raikkonen raised the possibility of Ferrari getting involved in the fight for the front row. He was little more than a tenth of a second slower than Rosberg.

He was separated from team mate Sebastian Vettel by Verstappen. Unlike their front-running rivals, Red Bull elected to send both drivers out on super-soft tyres instead of ultra-softs.

The two RB12s returned to the track on the softer rubber at the end of the session but both abandoned their laps as they realised their super-soft times were safe. The Red Bull pair will therefore have the potential strategic advantage of starting the race on the harder rubber.

Fernando Alonso grabbed the final place in Q3 at the expense of Valtteri Bottas, whom he beat by four-hundredths of a second. Felipe Massa therefore claimed a top ten starting place for his final grand prix, though Jenson Button did not.

Hamilton sustained his momentum at the beginning of Q3, finding yet more time to pull three-tenths clear of Rosberg after their first runs. But as the track continued to cool it was clear the pace was increasing, and the final runs would be decisive.

Even so the Mercedes pair had enough performance in hand to be able to take to the track well in front of their rivals, reducing the risk of being hampered by a yellow flag. Hamilton was first to run and, as had been the case throughout the session, Rosberg was slightly quicker in the short first sector.

Around the rest of the lap Hamilton pressed home his advantage. He overturned the deficit and more in the middle sector, and a clean but attacking run through the final corners yielded a lap just three-tenths shy of his track record from five years ago.

Rosberg couldn’t match it. He had at least found enough time to equal Hamilton’s first Q3 run, and that left him over half a second clear of the pursuing pack.

They were led by Daniel Ricciardo whose Red Bull team mate stumbled in the final phase. Having failed to match his super-soft tyre sector time on his first lap, Verstappen then abandoned his second run. He lost fifth place to Vettel, whose last run left him just seven-hundredths shy of third place.

115 comments on “Hamilton sets up title showdown with pole position”