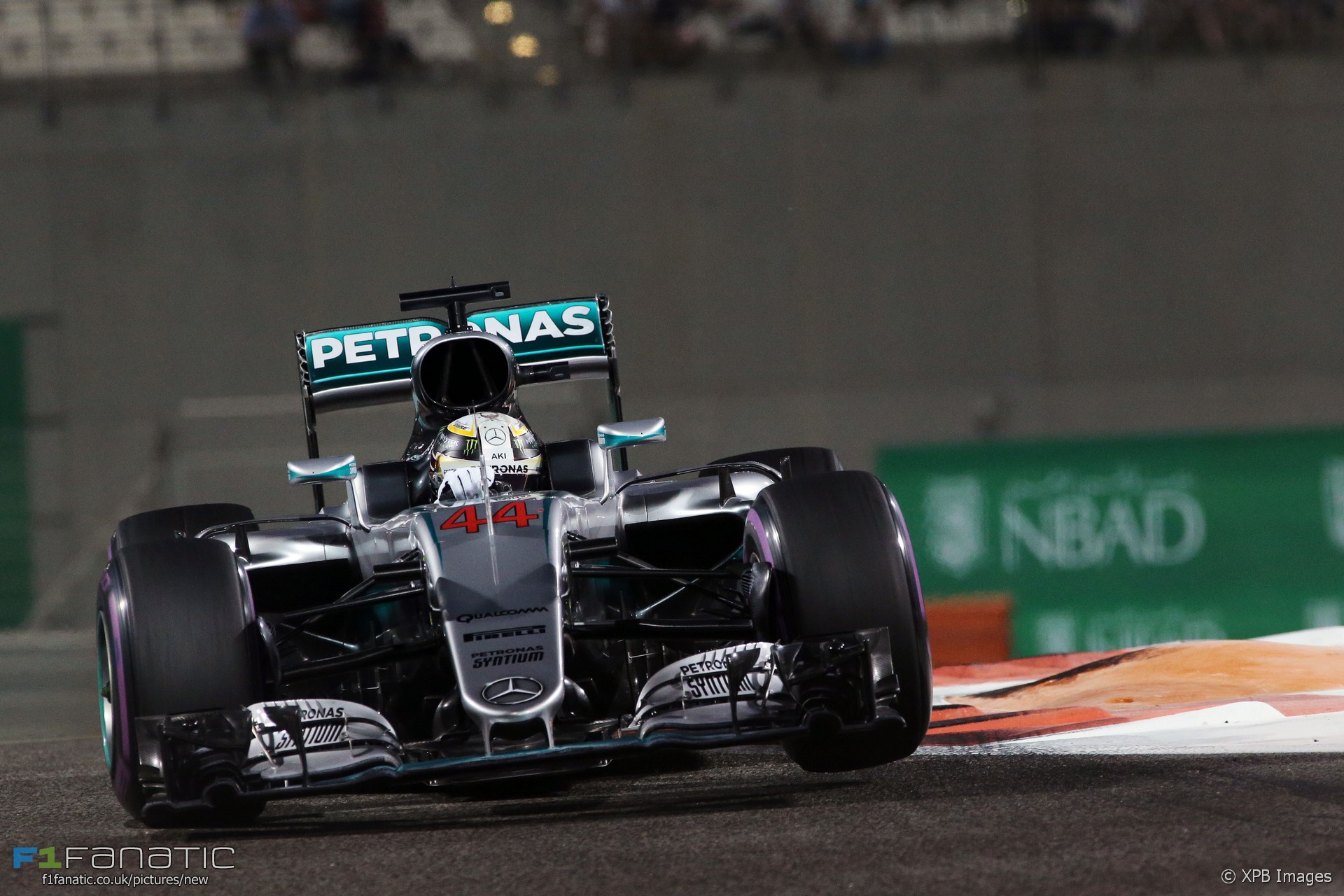 Since his championship hopes reached their lowest ebb following the Japanese Grand Prix, Lewis Hamilton has gone on a tear.

Four pole positions in a row and three victories so far has seen him block Nico Rosberg’s points-scoring opportunities in a manner which, for various reasons, he was seldom able to do earlier in the year.

But as has been widely commented on since the last round, merely winning races will not be enough to make him champion. With just 55 laps of Yas Marina between him and the final chequered flag of the season the time has come for Hamilton to ask whether he is happy to let the race run its course and see if it delivers the title, or whether he will try to make life difficult for Rosberg and bring their rivals into play.

Whenever he’s been asked about it this weekend Hamilton has pointed out how difficult it would be to pull off such a feat at Yas Marina. As noted here a few weeks ago, its long DRS zones make such tactics tricky.

But the championship is hanging in the balance and pride is at stake. Very few drivers had a world title taken away from them by their team mates. Would Hamilton really not be tempted to try it if Rosberg is in his mirrors late in the race and the aggressive Red Bulls are just a few seconds behind?

Hamilton doesn’t need to stamp on the brakes at every corner to hold Rosberg up. F1 cars do not like running in the hot air of another and while Abu Dhabi’s evening race isn’t the hottest it is still very warm. By depriving Rosberg of the two second buffer drivers are usually urged to maintain, Hamilton can put his team mate’s car under greater strain and ensure Rosberg’s rivals remain in touch.

Hamilton may want to inflict pain on Rosberg by thrashing him, but doing that would ease the pressure on his team mate in the race. Furthermore, if Hamilton pulls 20 seconds clear of Rosberg and then decided he does need to hold his team mate up, Hamilton could lose too much heat from his tyres by backing off. That’s another reason to keep Rosberg at arm’s length.

Of course before Hamilton gets to this point he first needs to get off the line successfully. That’s something he has not been able to take for granted this year. But since his last botched start at Suzuka he seems to have finally got on terms with the Mercedes’ finicky clutch.

For Rosberg, keeping his position at the start or – his dream outcome – getting down the inside of Hamilton, would do his title chances a power of good. His prospects look good thanks to Yas Marina’s comparatively short 305 metre run to turn on plus the fact his closest threat will start the race on harder tyres.

Will Red Bull’s alternative tyre strategy help them attack the Mercedes pair? This of course depends partly on Hamilton’s start and tactics. Starting on the super-soft tyre should allow them to run slightly longer into the first stint.

However the timing of that first pit stop will be strongly influenced by the traffic situation behind them. Red Bull used the same tactics when the ultra-soft tyre was available at Singapore, but despite starting on the super-softs both drivers pitted before the likes of Rosberg, who was on ultra-softs.

Ferrari, meanwhile, appear to be more preoccupied with beating Red Bull than Mercedes. That will be music to Rosberg’s ears, and give Hamilton further cause to reconsider whether he should take matters into his own hands.

Safety Car appearances are unusual at this track but those who paid attention to Saturday’s GP3 race may have been surprised to note it was used for something as minor as a single car stopped close to an access point. If race control is operating the Safety Car on a hair-trigger this weekend Mercedes’ strategists could age several years in one race.

The yellow flag system also seems particularly sensitive this weekend. There have been many very brief yellow flag periods, during which time the all-important DRS zones are shut off. During one practice session Romain Grosjean complained the marshals were “waving the flag for nothing”.

Drivers should also note the stewards were quick to pounce on a driver overtaking another having put all four wheels off the track at the exit of turn nine. Yas Marina’s run-offs invite this kind of abuse at almost every corner.

That kind of wheel-to-wheel action has been in short supply in F1 races at the track in the past. Hopefully that won’t be the case tomorrow and this down-to-the-wire title battle will get the nailbiting conclusion it deserves.

Will Hamilton resist the temptation to meddle with Rosberg’s race if the opportunity presents itself? Due you think he should? Or can Rosberg take the title in style?

Share your views on the Abu Dhabi Grand Prix in the comments.

70 comments on “Will he or won’t he? Delaying Rosberg may be Hamilton’s last resort”