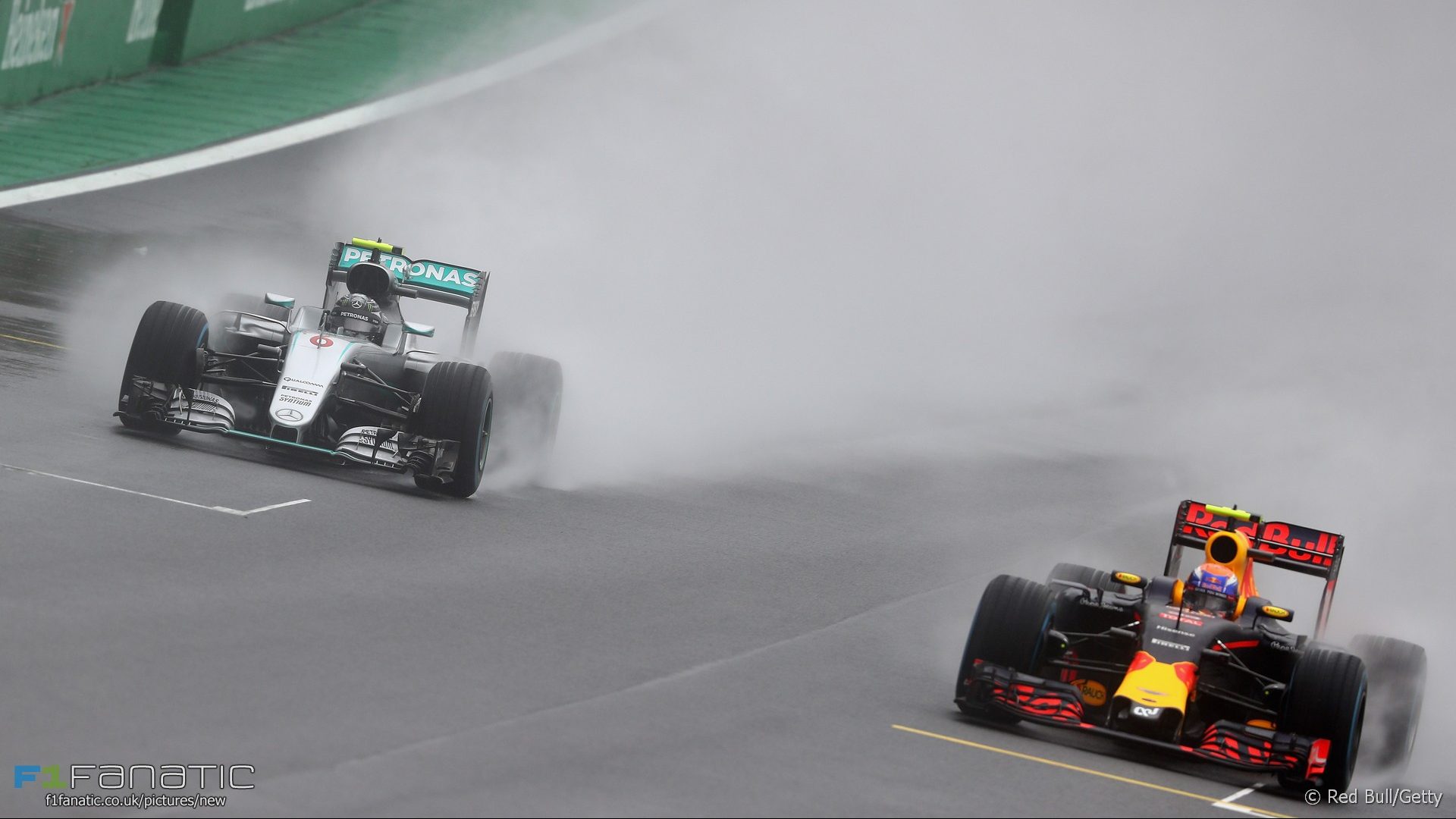 Did race control dither too long to get the Brazilian Grand Prix started? Or did waiting until the conditions improve permit a more exciting race than we would otherwise have seen?

This was the debate which divided readers in response to last weekend’s rain-hit race. However an average rating of just under eight out of ten made this one of the most popular races of the season by far.

Here’s what you had to say about the Brazilian Grand Prix.

Race control is far too conservative and they ruined then possibility of having one of the truly great races, so this one is merely good due to Verstappen.
Yosi (@Yoshif8tures)

That said, I know current F1 cars have more difficulties to run under wet conditions than in the past. I see two reasons:
1: Pirelli’s wet tyres are bad (even worse than their slick tyres).
2: Parc ferme rules: no real wet set-ups allowed on cars. This is stupid and dangerous.
@Bebilou

Instead of running for 30 minutes behind the Safety Car with temporarily increased rain intensity, the red flag came out and stopped the race-clock. That decision gave the spectator 20-25 laps more racing at speed when the rain eased off again.
Leo B

There have been only a handful of races where I’ve been scared for the drivers, and this was one of them: it seems like any lap we might see a catastrophic accident on the front ‘straight’, and it was hard to enjoy this race. Also the lengthy delays certainly did not improve the show, which was pretty good eventually.
@KaIIe

With the championship hanging in the balance, Max Verstappen’s decision to switch to intermediate tyres may have played into Nico Rosberg’s hands. Having been second, his attempt to pressure race leader Lewis Hamilton backfired and dropped him behind the second Mercedes:

A highly entertaining race, even if it continues to prove the wet tyres need reworking.

Would have liked to have seen how the Red Bulls would have done if the team hadn’t tried to be clever. Disappointed it won’t be a winner takes all in Abu Dhabi after Rosberg got second and was distraught for Massa.

But still a very entertaining race. Goes to show how skilled some of these guys are.
Craig Wilde (@Wildfire15)

The race looked like it might be very interesting until Red Bull put Verstappen on inters which in my opinion was stupid. His drive late in the race was exceptional but I can’t ignore the fact that he was on much fresher tires than those around him.

It was interesting to hear the US broadcasters fall all over themselves praising Verstappen and wondering about his driving off-line when Michael Schumacher did it to good effect in Spain 1996. I’m definitely becoming a fan of Verstappen’s as he’s shown time after time that he’s there to race and not just safely collect points.
@Velocityboy

The race also saw an emotional departure for Felipe Massa:

It wasn’t really a great race but seeing Massa crash out, find a Brazilian flag and slowly walking down to the paddock (including the mechanics of Mercedes and Ferrari lining up mid-race to applaud him) made my eyes tear up.

Formula One has not been this emotional since 2008, when the very same man lost the world championship at the very same track. If I’m tearing up about F1, then something about this sport is still pretty healthy.
Christopher (@Chrischrill)

And spare a thought for this reader who was unfortunately failed by technology:

Such a great race. Unfortunately I was not able to watch it completely as my hard disk recorder was not able capture all (I did not plan for it to take so long) and it was not available on replay TV :(
@Backwards

17 comments on “Strong rating for Brazilian GP despite red flags”