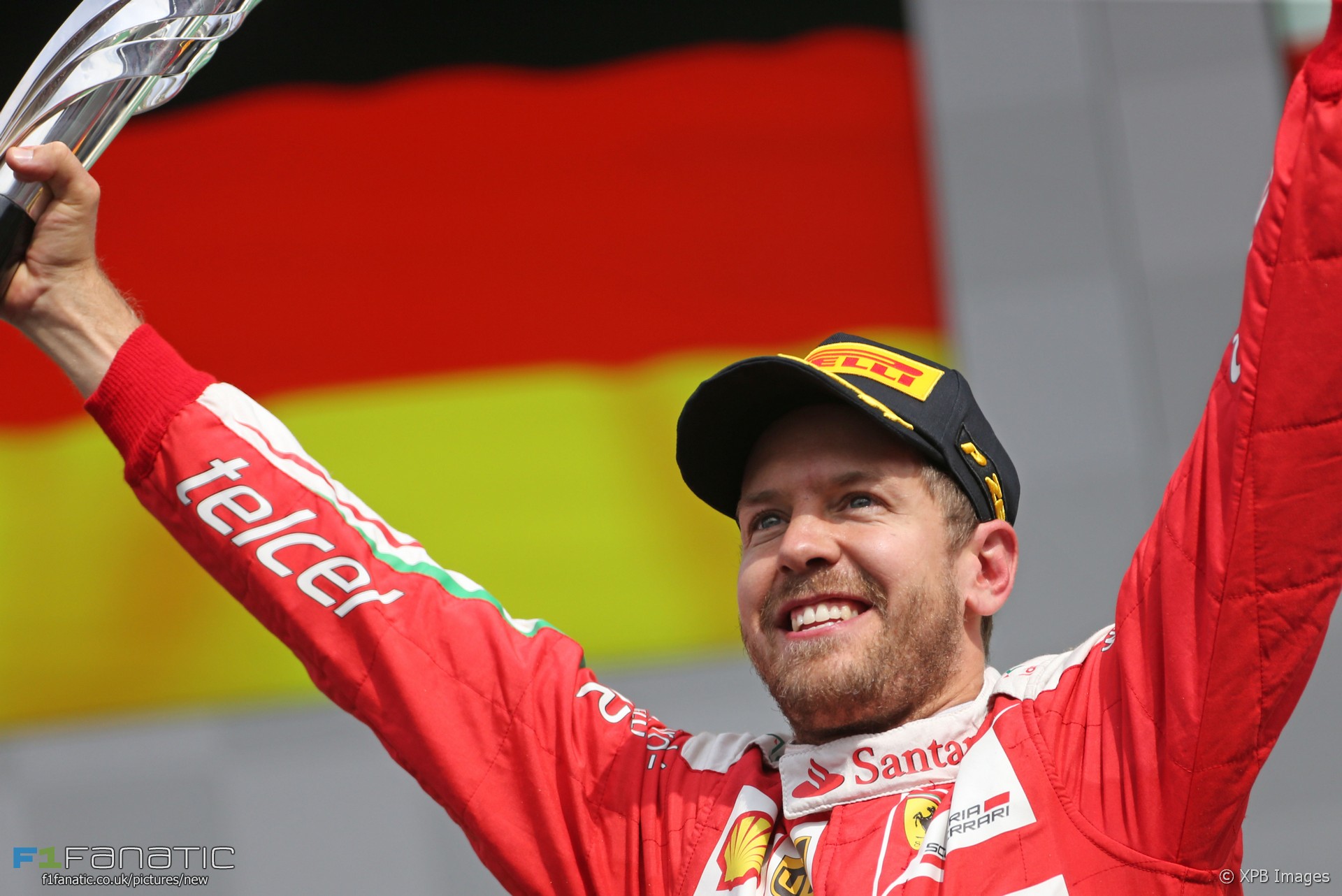 Sebastian Vettel became the 11th different Driver of the Weekend winner this year after one of the closest votes we’ve ever had.

Vettel, who was promoted then demoted from the podium in a series of post-race decisions, topped the poll with just 22.6% of the vote. Nico Hulkenberg was a close second with just seven votes fewer than the Ferrari driver.

Your votes were also shared between race winner Lewis Hamilton, Marcus Ericsson and Daniel Ricciardo who each received more than 10%.

A strong turn of pace in practice raised eyebrows and questions as to whether Ferrari could legitimately challenge Mercedes in qualifying, but those hopes were quickly dashed in Q3. Vettel could find no pace on his super-soft tyres and could only managed seventh behind his team mate and Hulkenberg.

Vettel set about a long first stint in the hope of having fresher tyres to attack at the end. This worked, but it put him on a collision course with third-placed Max Verstappen.

A half-move down the start-finish straight was enough to distract the Red Bull driver, but Verstappen scampered across the turn one run-off and rejoined still in front of the Ferrari. This prompted a flurry of invective from Vettel aimed at both his rival and, later, race director Charlie Whiting.

Meanwhile the other Red Bull of Daniel Ricciardo was closing on the pair of them. When he mounted his attack on Vettel the Ferrari driver squeezed him hard in the turn four braking zone. This error of judgement meant that although Verstappen hastily-applied penalty allowed Vettel to join the podium celebrations, he was later relegated to fifth place.

His hot-headed move prompted a score of just two out of five in the driver ratings. But the F1 Fanatic readership looked more kindly on Vettel’s efforts, some having been unconvinced about the reasons for his penalty which was applied in line with a recent clarification of the rules on driving standards.

I think Vettel had a good weekend. Had decent pace all weekend but the Ferrari was just not fast enough in qualifying.

In the race he drove a controlled first stint and then he showed his overtaking and defending abilities against Verstappen and Ricciardo, only to get a ridiculous penalty
Sameer (@fish123)

Vettel provided the most entertaining moves and drama. He deserved penalty but he made the race a lot more fun.
Jureo (@jureo)

Vettel´s race was outstanding and I disagree with the penalty given to him, but his Saturday was awful.
Banana88x (@banana88x)

As after the United States race, however, there were a large number of comments from people saying why they hadn’t voted for the eventual winner.

I was going to vote for Vettel until he threw away a good third place by being penalised for moving under braking. I was also unimpressed when he threw a tantrum over the radio and abused Charlie Whiting.
Hamish Curtis (@ayrtonsenna26)

Ericsson was one of the most highly-praised drivers and Hulkenberg received a number of positive comments too. While Hamilton won from pole, many were unimpressed by the manner in which he straight-lined the first corner at the start.

That was an amazing race by Ericsson. He got caught out in a first lap collision with Gutierrez and Wehrlein and got damage. Nobody was really to blame.

He fell to pretty much the back of the pack, pitted on lap one and then went all the way to the end and finished in 11th! No cars above him retiring helped either. That was just pure pace. Very impressive.
Ben Rowe (@thegianthogweed)

Back in Austria, Wehrlein benefited from the retirements of Vettel, Perez and Alonso to score tenth place and he was voted Driver of the Weekend. If the same drivers would have retired in Mexico, Ericsson would have been eighth and I can imagine he would’ve win this poll convincingly. Shame his great drive didn’t get the reward it deserved.
@Andae23

Hulkenberg did the perfect job in qualifying, the start of the race, and throughout the race. He finished as well as he could, with only the Mercedes, Red Bulls and Ferraris in front of him.
ME4ME (@me4me)

I just can’t vote for Hamilton with that opening lap corner cut. He had a rock solid opening weekend, but he held position with a very ‘creative’ line through those corners. I criticised Rosberg in Canada 2014 for the same and I won’t be a hypocrite despite being a supporter of Hamiltons.

So I’m going to sling a vote Ericsson’s way. He nearly got into the points without profiting from retirements. Not a championship drive exactly but no one else grabbed my attention.
Philip (@philipgb)