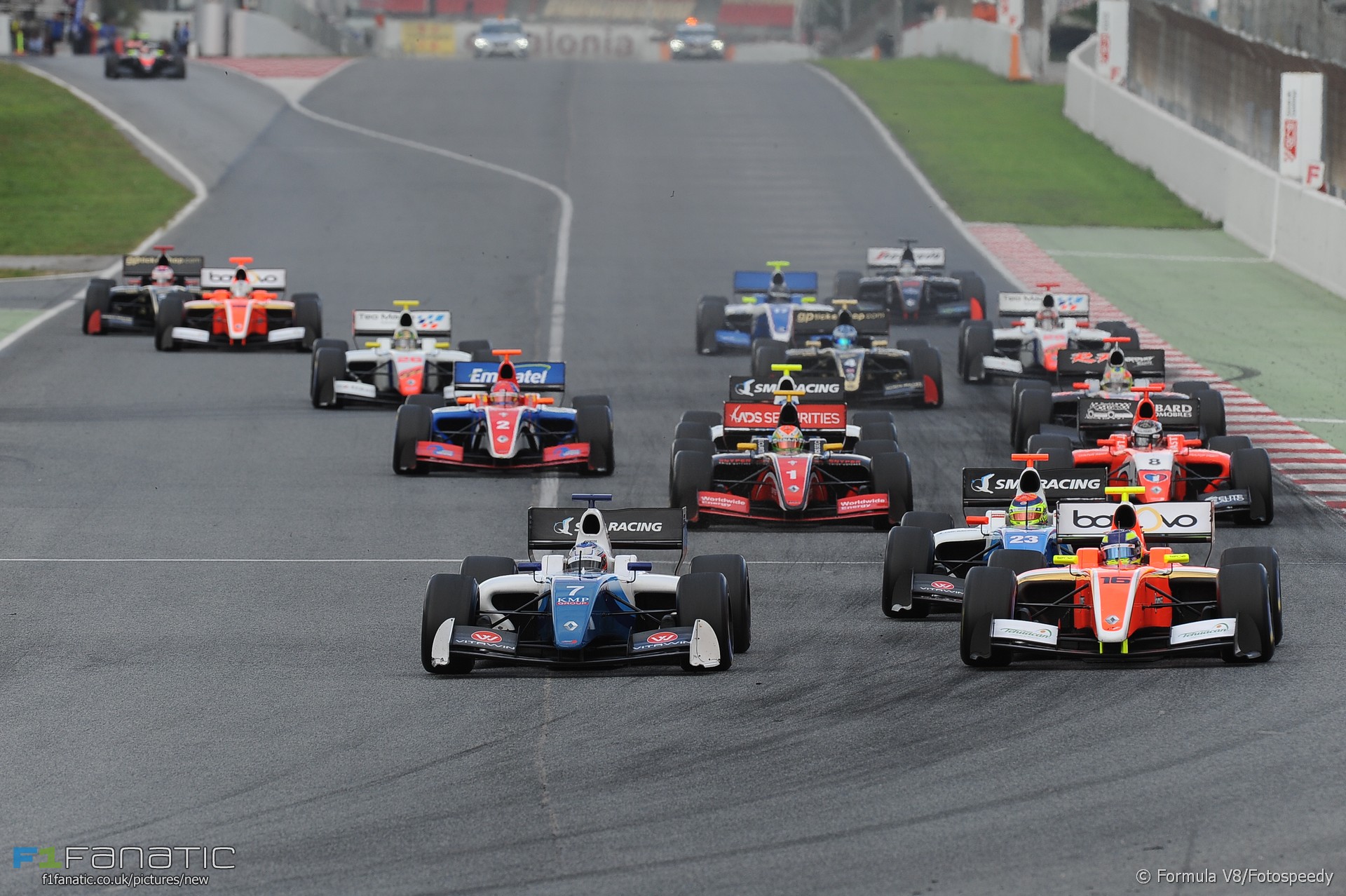 The first ever Formula V8 3.5 title was decided this weekend, though it hung in the balance right until the chequered flag dropped. Elsewhere the World Endurance Championship neared its conclusion and the penultimate round of the V8 Supercars took place in New Zealand.

Tom Dillmann sensationally snatched the championship from Louis Deletraz as the Formula V8 3.5 title battle went down to last lap of the season.

The weekend began with seven drivers mathematically in the title hunt. But a battling performance by Deletraz on Saturday, cleanly passing Dillmann on his way to a valuable second place, meant he went into the finale with a six-point margin over Dillmann, the rest having been eliminated for contention.

With Deletraz starting the final race from pole position and needing only to finish ahead of seventh-place Dillmann, the destiny of the title appeared to be a forgone conclusion. At the start, however, Deletraz slipped to fourth and immediately had Dillmann filling his mirrors.

AVF were quick to bring Dillmann in for his mandatory pit stop while Fortec were content to leave Deletraz running in the wake of team mate Pietro Fittipaldi. Once they finally brought their man in the position was lost to Dillmann.

All was not lost for Deletraz in terms of the championship provided Dillmann did not win the race. But when dawdling backmarker Giuseppe Cipriani emerged from a shambolic pit stop in front of race leaders Matevos Isaakyan and Roy Nissany, the race swung dramatically in Dillmann’s favour. Both lost so much time behind the Durango car that their pit stops dropped them behind the championship contender.

Dillmann duly won his first race since April and with it snatched the title from a stunned Deletraz.

Videos may only be available in some regions

Mark Webber drank the victory champagne for the last time in his career on Sunday – only rosewater on the podium at the WEC finale in Bahrain – as he won in China with team mates Timo Bernhard and Brendon Hartley. That clinched the manufacturer for their Porsche team for the seconds year in a row.

The trio led from lap one and won by almost a minute from the two Toyotas. Kamui Kobayashi, Stephane Sarrazin and Mike Conway kept their drivers’ title chances alive with second ahead of the sister car of Anthony Davidson, Sebastian Buemi and Kazuki Nakajima.

The Audis struggled in their penultimate appearance in the championship, finishing fifth and sixth, respectively three and fourteen laps adrift.

The G-Drive ORECA of Roman Rusinov, Alex Brundle and Will Stevens took LMP2 honours, though it was the fourth in class Signatech Alpine team which clinched the title in the hands of Gustavo Menezes, Nicolas Lapierre and Stephane Richelmi.

GTE Pro was dominated by Ford, with Andy Priaulx and Harry Tincknell taking the win ahead of team-mates Stefan Mucke and Olivier Pla, while Aston Martin’s lineup of Pedro Lamy, Mathias Lauda and Paul Dalla Lana took the win in GTE Am.

Jamie Whincup’s hopes of a seventh V8 Supercars title are hanging by a thread despite a pair of wins in last weekend’s quadruple-header at Pukekohe. A divebomb move on points leader Shane van Gisbergen in the third race earned Whincup a penalty which left him 25th at the flag and 191 points adrift with 300 available at the Sydney finale in December.

The remaining wins were shared by van Gisbergen and Mark Winterbottom, the outgoing champion taking his second victory of the season.

Following a six-hour delay due to rain, Carl Edwards beat Joey Logano to the flag by six-tenths of a second to secure his place in the shoot-out for the championship in two weekends’ time.

What did you make of this weekends racing? Let us know in the comments below.

The Formula One title could be won by Nico Rosberg in Brazil this weekend. Elsewhere Formula E ventures to Morocco and the penultimate NASCAR race of the season will decide who can shoot for the title in Miami.