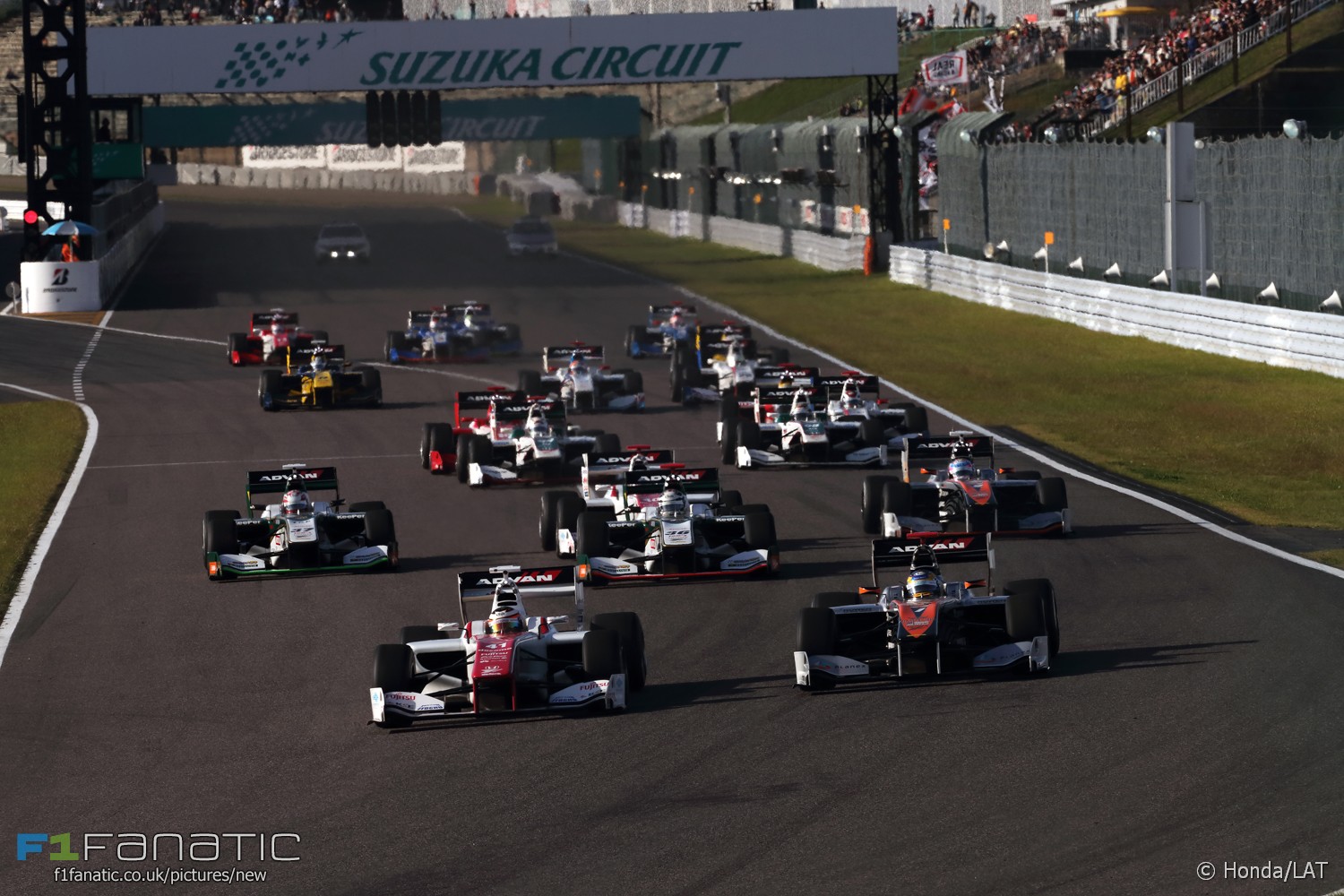 The 2016 Super Formula title was wrapped up after a double header at Suzuka, while the Formula V8 3.5 championship also neared its conclusion with the penultimate round at Jerez.

Britain hosted the penultimate round of the World Rally Championship which saw the fight for the win go to the final stage, while the first contender for the NASCAR title was decided.

Yuji Kunimoto overcame a four-point deficit over leader into the weekend Yuki Sekiguchi to take the title. In race one (above) Kunimoto got a better getaway than pole-sitter Hiroaki Ishiura to take the lead while Andre Lotterer jumped to second.

Meanwhile, Sekiguchi struggled from 13th on the grid to the top ten, eventually recovering up to eighth on the road, only to be given a 30-second penalty for causing a collision with Stoffel Vandoorne at the chicane.

That set up a three-way fight for the championship in the final race with eight points on offer and Kunimoto on 31.5 to Sekiguchi’s 27.5 and Lotterer’s 26.

In race two, Vandoorne took the lead from second on the grid, with Ishiura again dropping from pole position. Many drivers, including Sekiguchi, pitted on lap three to complete the mandatory pit stop, while others elected to stay out for as long as possible. At the end, Vandoorne took victory ahead of Lotterer, while Kunimoto took 6th place with Sekiguchi 8th, meaning Kunimoto was champion ahead of Lotterer with Sekiguchi in third.

Vandoorne, who will drive for McLaren next year, finished the championship in a highly creditable fourth with two wins. Former F1 drivers Kazuki Nakajima and Narain Karthikeyan ended their campaigns 6th and 14th respectively.

Sebastien Ogier claimed his fourth consecutive victory and his first on gravel this season, but was forced to push right to the end of Wales Rally GB by Ott Tanak.

Ogier gradually eased away on Friday as Tanak struggled by being further down the running order as the rain and cars made the road slippery, but he kept within striking distance before a puncture on the final stage of the day costs him a minimum of fourteen seconds. Ogier wasn’t without worry however, as both his team mates dropped back with transmission failures, his indeed breaking too as he reached the end of the final stage.

Tanak closed the gap marginally on Saturday but Sunday he ran riot, taking chunks out of Ogier’s lead with every stage, but just running out of time, ending the rally just 10.2 seconds shy of the four-time champion. Thierry Neuville completed the podium, taking important points in his battle for second in the championship with Andreas Mikkelsen.

Seven drivers will go into the final weekend of the Formula V8 3.5 champion after Tom Dillmann’s title bid fell apart at Jerez. The AVF driver was knocked out by closest rival Louis Deletraz in race one, and though Deletraz was later stripped of his points from the race a second place in the Sunday event moved him to the top of the championship table.

Matevos Isaakyan secured his maiden victory in the first race of the weekend after inheriting the lead on lap 19 when Matthieu Vaxiviere straight-lined the chicane. Egor Orudzhev made a rocket startfrom fifth on the grid to take the lead from pole sitter Deletraz in race two and resisted his rival to the flag.

With 50 points up for grabs at the Circuit de Catalunya Deletraz heads there with a one-point lead over Dillmann. Matthieu Vaxiviere, Aurelien Panis, Roy Nissany, Egor Orudzhev and Rene Binder are all in with a chance as well.

Videos may be restricted in some regions.

Jimmie Johnson’s victory in Martinsville means he will go into the final race of the year with a chance to join NASCAR greats Richard Petty and Dale Earnhardt as a seven-times champion. Brad Keselowski took second after climbing up the order late on after being eliminated from the title race last week, ahead of Chase contenders Denny Hamlin, Matt Kenseth and Kyle Busch.

The other four drivers in the Chase had more troubled days: Joey Logano was ninth, Kevin Harvick 20th, Kurt Busch in 22nd and Carl Edwards 36th. They have just two races left to secure their places in the final-round championship fight.

Lewis Hamilton took his second consecutive victory and his first in Mexico to keep the pressure on team mate and championship leader Nico Rosberg, who followed him home in second. The fight for third, meanwhile, was fought hard on and off the track, and eventually went to Daniel Ricciardo.

Andrea Dovizioso won in Malaysia and took his second career victory to make it nine different winners in the MotoGP season, ahead of Valentino Rossi and Jorge Lorenzo. Early in the race there was a top six breakaway but Cal Crutchlow, Marc Marquez and Andrea Iannone fell within two laps of one another.

What did you make of this weekend’s racing, or did you enjoy anything we haven’t covered, let us know in the comments.

Next weekend is the penultimate round of both the World Endurance Championship and the V8 Supercars, while NASCAR rolls on and the title will be decided in Formula V8 3.5 at the Circuit de Catalunya.