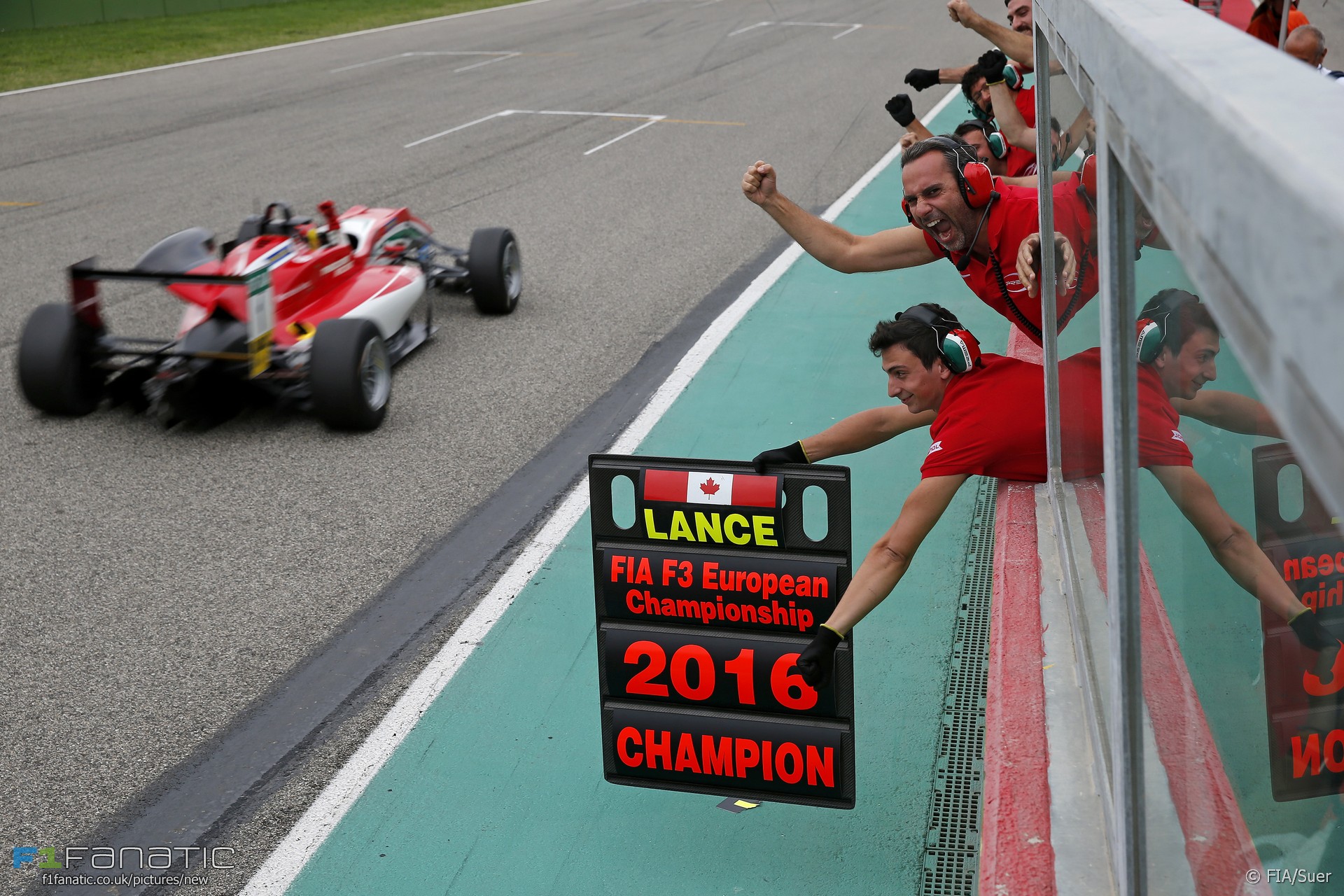 The driver widely tipped to be a Williams F1 racer next year clinched the European Formula Three championship last weekend.

And that wasn’t the only title clinched over the last 48 hours. The remarkable Lando Norris collected his third crown of 2016 and the British Touring Car Championship reached an exciting conclusion at Brands Hatch.

Just six drivers finished on the lead lap at Dover as Martin Truex Jnr dominated proceedings at his home track. Tony Steward, Chris Buescher, Jamie McMurray and Kyla Larson were all eliminated in the ‘Chase for the Cup’.

Tom Dillmann’s championship lead was slashed by Louis Deletraz and Roy Nissany over the course of two races at Monza. Nissany won the opening race comfortably from pole position and should have started the second from the head of the pack, but stalled and had to start from the pits. Nonetheless he recovered to sixth place. A pair of podiums for Deletraz leaves him 11 points behind Dillmann with 100 remaining to be won, while Nissany is a further 17 adrift.

Egor Orudzev joined Nissany by becoming the second driver this year to win three races, but Arden team mate Aurelian Panis was taken to hospital after complaining of back pains following a lap one crash. In the same race Pietro Fittipaldi took his best result of the season so far with fourth; the day before he completed the entire race distance with a traffic cone stuck to his car after cutting the chicane on lap one.

Shedden began the race behind Tordoff but passed the BMW driver early on and kept a hold on his podium place despite spending the final lap under fierce pressure from Adam Morgan.

Colin Turkington won the first two races of the weekend while Mat Jackson tied him on five 2016 wins in the finale.

Video not available yet. Some viewers will be able to watch highlights here.

Leonardo Pulcini won both races at home but he was made to work hard for the final one: His last-lap scrap with Ferdinand Habsburg was some of the best action we’ve seen all year.

Red Bull claimed a one-two in Malaysia after Lewis Hamilton retired with an engine failure. Nico Rosberg extended his points lead by recovering to third place after being hit by Sebastian Vettel on the first lap.

There was more joy for Prema in the support races as they clinched the GP2 teams’ championship in their first year in the category. The drivers’ championship will almost certainly go to one of their racers in the finale at Abu Dhabi next month. Antonio Giovinazzi took victory in the first race after team mate and pole sitter Pierre Gasly made a poor start. Luca Ghiotto claimed his first win in the sprint race.

Charles Leclerc failed to convert pole to victory in the first GP3 race of the weekend, allowing title rival Alexander Albon to win and reduce the gap between them. Leclerc reduced Albon’s total points gain to just the by beating him home in the second race, and heads to the finale with a handy 29-point lead over his team mate.

Second place in the first of three races at the Hockenheimring was enough to guarantee a third championship trophy of 2016 for Lando Norris. The 16-year-old has already taken the Formula Toyota New Zealand crown and Formula Renault 2.0 Eurocup title.

What racing action did you enjoy last weekend? What will you be watching next weekend? Let us know in the comments.

One of the most keenly anticipated races on the motorsport calendar takes place next weekend: The Bathurst 1000, part of the Australian Supercars championship.

Also next weekend the 2016-17 Formula E season begins in Hong Kong, F1 heads to Suzuka, and the NASCAR Round of 12 begins at Charlotte.