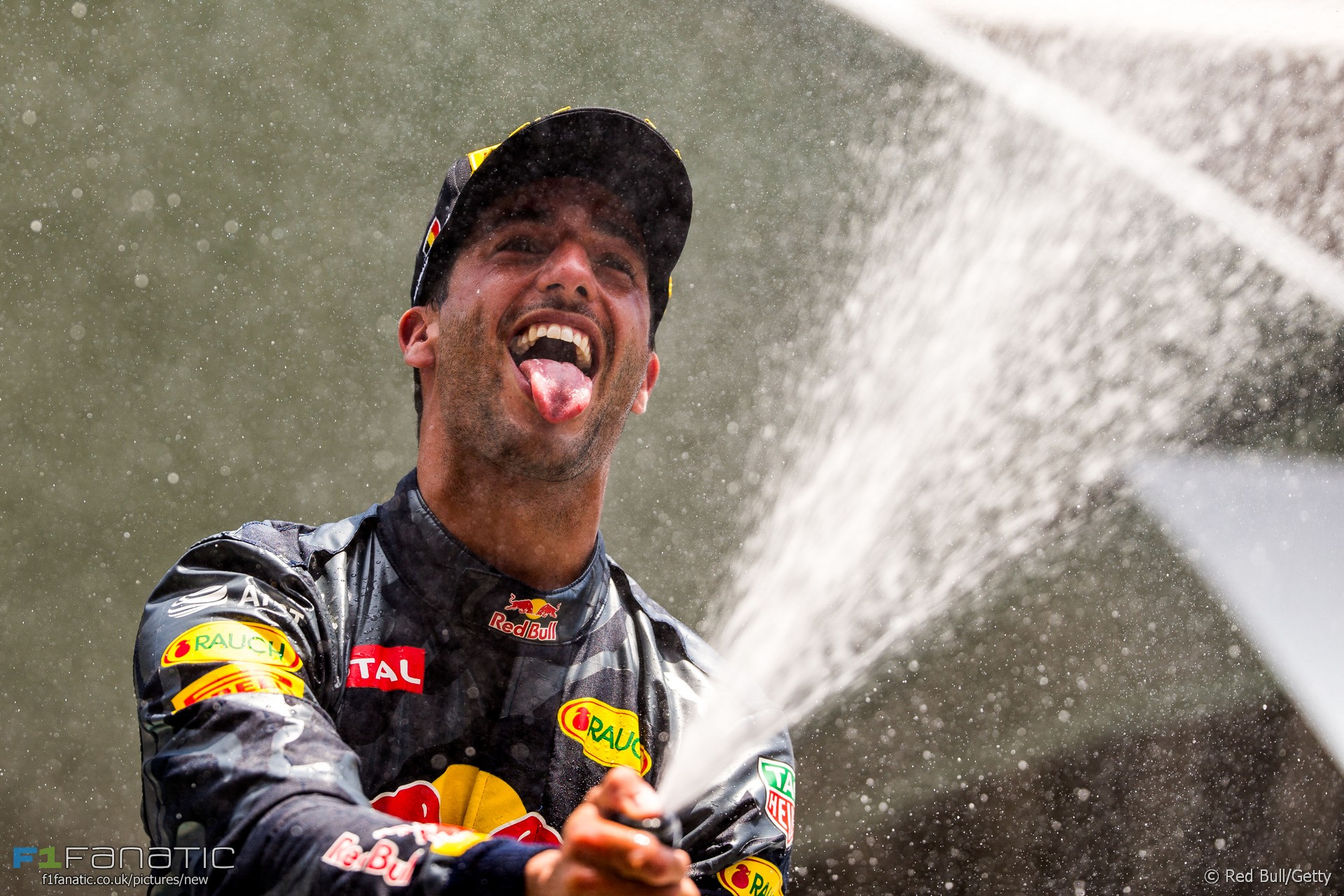 Daniel Ricciardo was voted Driver of the Weekend for the Italian Grand Prix, taking his fourth victory in the poll this year. The Red Bull driver has topped the poll twice more than any of his rivals this season.

Ricciardo, who previously won in China, Moncaco and Germany, picked up 37.4% of a vote which many readers felt was difficult to judge after a fairly lacklustre grand prix.

From free practice on Friday it was clear Red Bull were nowhere near the pace of Mercedes and Ferrari, and could also struggle to beat Williams. So for Ricciardo to be ahead of one Williams and just one thousandth of a second behind the other was a fine effort.

Having got off the line much better than his team mate, Ricciardo got ahead of the slow starting Hamilton, though this didn’t last long. Once Hamilton easily accelerated past Ricciardo kept the Williams of Valtteri Bottas in close sight. Crucially, this allowed Red Bull to go aggressive with his strategy, fitting super-soft tyres for Ricciardo’s final stint..

On a set of tyres one step softer than Bottas, Ricciardo quickly set about closing the gap to the Williams. When the pass came, it was one to remember. Ricciardo launched down the inside of Bottas from a seemingly impossible distance. That move, which put a lock on fifth place, was cited by many as their reason for voting for him.

Ricciardo had a decent qualifying, a decent race and a pass on Bottas that was a joy to watch.
hyoko

It cannot go to either Mercedes because of their performances in qualifying and the race. I think I will give it to Ricciardo for getting the most out of his car. Fifth was the maximum for Red Bull.
Uzair Syed (@ultimateuzair)

Got to be Ricciardo. Absolutely maximised the position on the worst track for his car on the calendar. Destroyed Verstappen both in qualifying and race. Made an amazing overtake from way back on Bottas. What more could you ask for?
@Montreal95

Despite winning his seventh race of the season, Nico Rosberg remains yet to win Driver of the Weekend this year. The Mercedes driver received second-highest number of votes for the Monza race. Team mate Lewis Hamilton, who has won all car one of the remaining races, has just a single Driver of the Weekend victory to his name.

The consensus however was that no-one in particular stood out all weekend, with a number of readers citing this as a reason for not voting. With this in mind, from the next race Driver of the Weekend will include an option to vote for ‘no driver’.

Maybe this is the weekend I skip this part. I didn’t see anyone do anything special on both days to warrant a Driver of the Weekend award. Ricciardo maybe for his pass but it was too reliant on Bottas giving him a clean pass on the corner.

Gutierrez could have got it for his awesome qualifying, had he scored some points today. That hope was taken care of, at the lights.
@Evered7

I’m going to sit on the fence for this one, pretty much an impossible job to choose.
Kavin Kannan (@lolzerbob)

No one stood out too much. Can’t give it to Rosberg as he got absolutely hammered in qualifying. Hamilton had a poor start and threw a win away. Ferrari were the second fastest by a long way so third and fourth was a given.

Ricciardo made a decent overtake and finished where you’d expect him to. I guess Ricciardo because of the overtaking manoeuvre but if there was a “no-one” option, I’d have gone for that!
@Petebaldwin

33 comments on “Fourth Driver of the Weekend win for Ricciardo”